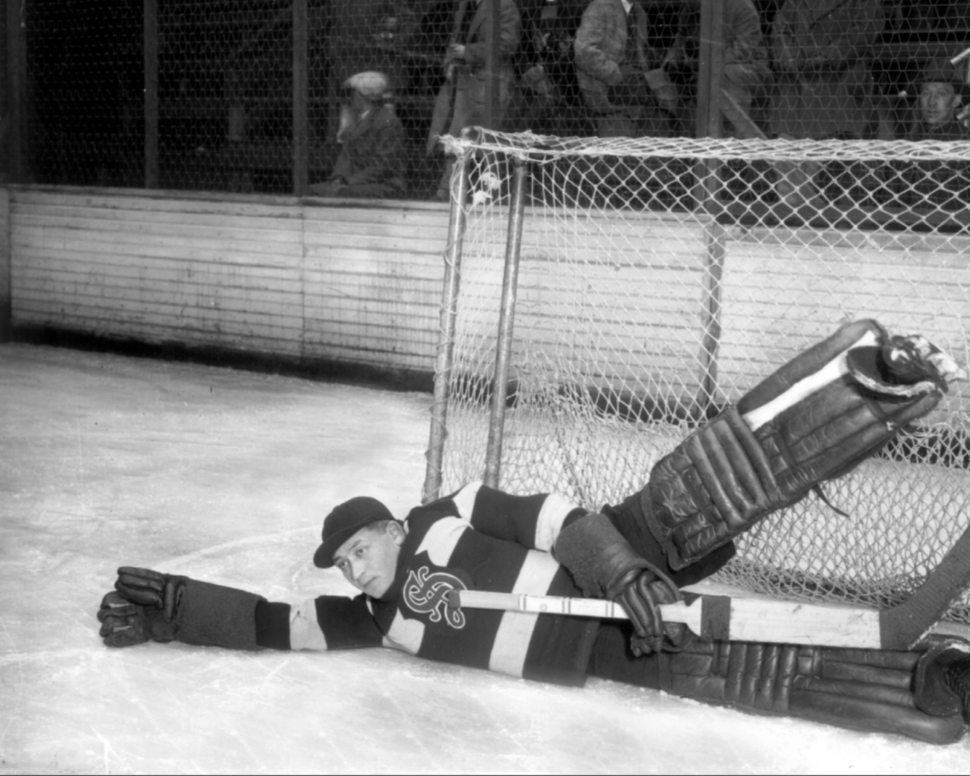 Nothing But Net: Porky Levine in his usual spot at the Seattle Civic Auditorium. Courtesy of Seattle Museum of History and Industry

When the 2021-22 National Hockey League season opens this October, the Seattle Kraken will be the first professional Emerald City team since the Totems folded in 1975.

But, Seattle has had a long affiliation with the game. The Seattle Metropolitans played in the Pacific Coast Hockey Association. At this time, the Stanley Cup was a “Challenge Trophy” and, in 1917, Seattle became the first American team to win it. Their iconic logo and multicolored striped jersey are still popular with collectors. Although the Metropolitans ceased operations in 1924, pro hockey was still played in the area.

During the 1928-29 season, the Seattle Eskimos were in mid-season trouble. The team had endured a miserable seven-game losing streak. Management feared missing the playoffs and knew that much of the trouble could be attributed to shoddy goaltending — but where could a general manager find quality help in hockey’s most demanding position without the network of farm teams and minor league affiliates that are available to teams today?

The answer came from the newly-minted Detroit Cougars who were blessed with two solid goaltenders — Herb Stewart and Dolly Dolson — and also an 18-year-old spare goalie with enormous potential named Samuel “Porky” Levine. 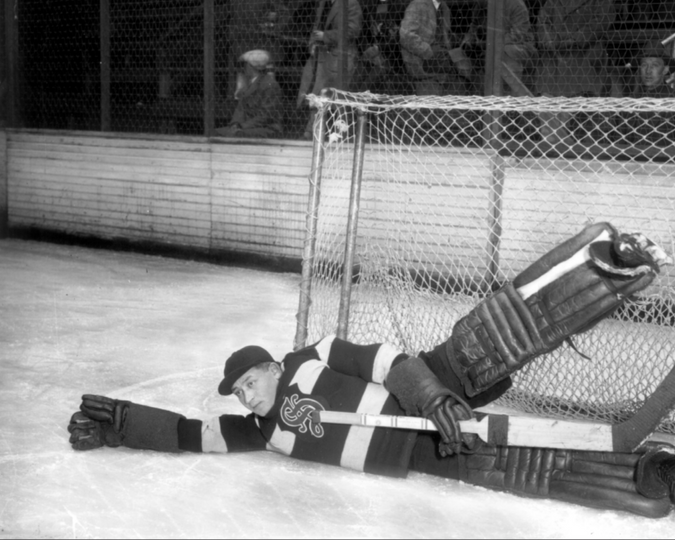 Nothing But Net: Porky Levine in his usual spot at the Seattle Civic Auditorium. Courtesy of Seattle Museum of History and Industry

Levine was born in Russia. His family emigrated to Canada and settled in Timmins and Kirkland Lake, Ontario, where many Jews had established businesses to support those employed in the mining industry.

He acquired the nickname “Porky” as a youngster playing baseball. His team was treated to a large communal dinner and roast pork was the main course. Levine politely declined and from that day forward, he was always known as Porky Levine. At 5’ 8” and 185 pounds, his rotund figure and round face also may have had something to do with the sobriquet. Levine’s stature was often compared in jest to film star Roscoe “Fatty” Arbuckle. Drawings and photos of Levine depicted him filling the net with his girth.

Levine played for the Ontario-based South Porcupine Seniors and the North Bay Trappers before he turned professional.

Home games for both the NHL Cougars and their Can-Pro League affiliate, the Detroit Olympics, were played at the Border Cities Arena in Windsor, Ontario, which they shared with the amateur Windsor Bulldogs while their new home, the Olympia, was under construction. Because the three organizations played and practiced in close proximity and quality goaltenders were a valued commodity, Porky played for each of these teams.

Detroit management valued Porky’s contributions as a practice goalie and refused generous offers for his contract, although they did agree on occasion to lend him to teams. Porky’s player-coach with the Olympics was Frank Foyston, who was well-known on the West Coast as he was a Stanley Cup champion with Seattle and Victoria. He probably facilitated the Cougars’ decision to loan Porky’s services to the Seattle Eskimos for the balance of the 1928-29 Pacific Coast Hockey League season.

Levine made an immediate impact. He stopped the Eskimos’ losing streak, winning his first two games with shutout performances. In short time, he became the Pacific Coast Hockey League’s premier and youngest netminder. By the time he was 20, he was featured in articles in sports columns as Seattle hockey’s main attraction. 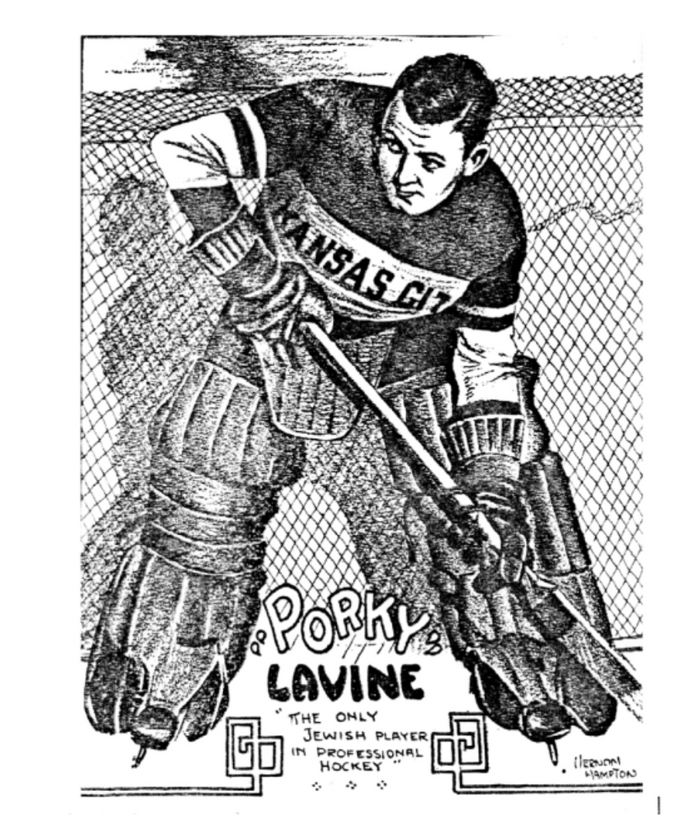 Filling the Net: A 1931 illustration in the Kansas City Star misspelled Levine’s name as it identified him as “the only Jewish player in professional hockey.” Courtesy of Irv Osterer

During his brief tenure on the West Coast, Porky played exceptionally well with a 12-7 record including four shutouts and a sparkling 1.79 Goals Against Average, leading the Eskimos to the league finals.

It is interesting to note that in a time that many athletes were not quick to divulge any information about their religious heritage, Levine never backed away from his connection to Judaism. In interviews, he spoke with pride about his sister’s work with Hadassah and his family’s contribution to Jewish communal life in Northern Ontario.

Still, there was some controversy regarding Porky’s style of play. Levine was one of the first in the west to bring an “eastern style” of goaltending — characterized by freezing the puck by catching it and falling on it when the opposing team was threatening or when a goalie felt his team needed a faceoff. Although this practice had been adopted by the NHL in 1918, and was approved by the old PCHA, these tactics created a near riot in the Pacific Coast Hockey League whose players were not as familiar with the practice.

Back in Motown, though, Levine’s absence was being felt. Detroit general manager Jack Adams concluded that his team was not scoring because the Cougars had lent Porky to Seattle leaving them with only one practice goalie. The Detroit Free Press reported that Adams had a “wooden effigy of the bulky Porky” constructed, and that players pushed the “plywood Porky” in front of the net during practice and sometimes took it out for pregame warm ups.

Levine returned to the Detroit camp the following season, hoping for more ice time after his success with the Eskimos, but instead the Cougars loaned him out for parts of the 1929-30 campaign to the Windsor Bulldogs and the Detroit Olympics in the International Hockey League. Frustrated by the lack of playing time, in 1930, Porky took signed with the Minneapolis Millers in the newly-formed American Hockey League, which much like the World Hockey Association did in the early 1970s, lured NHL veterans with lucrative offers to play in the new league.

During the Depression, the AHL struggled and returned to minor league status as the American Hockey Association. Levine would play almost his entire pro career in the AHA, winning championships in 1932-33 and 1933-34 with Kansas City; he is the league’s all-time statistical leader in many goaltending categories. His 18 shutouts with the 1931-32 Kansas City PlaMors earned him a mention in a “Ripley’s Believe it or Not,” although closer scrutiny to league records indicates that an overzealous editor added the words “in succession.”

Levine would get one last kick at the NHL can when Chicago goalie Lorne Chabot refused to report to camp in 1934. Porky was summoned to fill the void and by all accounts outperformed Joe Starke, the Blackhawks’ incumbent backup goalie in preseason play, but was relegated to the minors when Chabot signed.

Porky’s last season in the AHA was with the 1941-42 Dallas Texans where he suited up with landsmen Sammy Lavitt and Manny Cotlow. It may be the only time in hockey history where three Jewish players were starters on a North American professional hockey team.

The departure of Canadian players for military service during World War II proved an insurmountable obstacle for many minor hockey leagues in the United States. 1942 spelled the end for both the American Hockey Association and the Pacific Coast League. Levine moved to Vancouver and was affiliated with the St. Regis Hotel and its hockey team in a non-playing role. 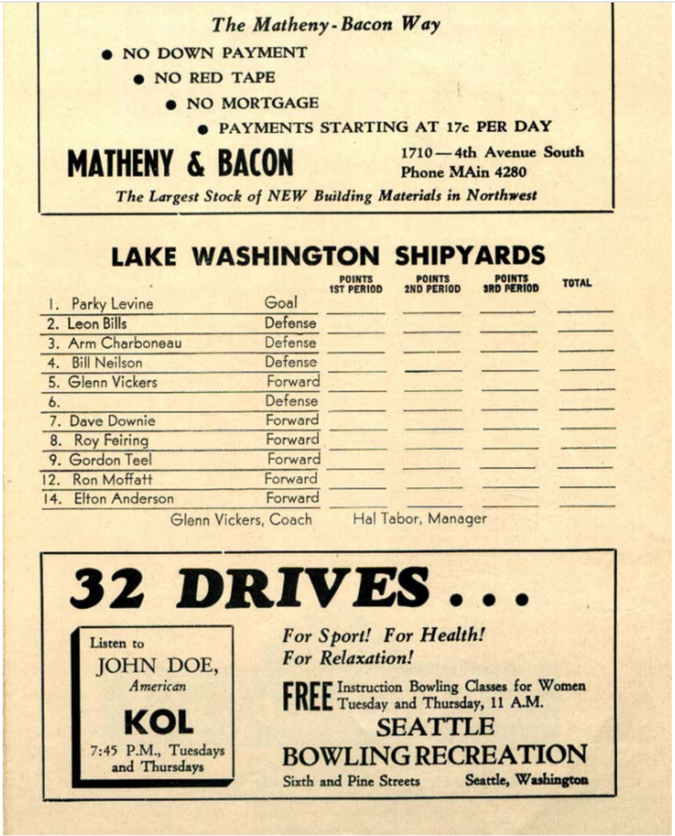 Back to Seattle: Porky played with the Lake Washington Shipyards came calling, after their goalie suffered a heart attack. Courtesy of Irv Osterer

Porky’s hockey career came full circle when the Lake Washington Shipyards came calling, after their goalie suffered a heart attack. Levine played half the 1942-43 season in the semi-pro Seattle City Hockey League and posted the team’s only shutout. Several times, sportswriters cited his goaltending as having made the difference between a win and a loss.

Lake Washington captured the League championship, and Levine was named a second team all-star, but by 1943-44, he had hung up his gear for good, finishing his career as minor professional hockey’s all-time regular season shutout king with 83 shutouts.

He returned to Vancouver to work for the St. Regis Saints in the British Columbia Mainland Hockey League as their manager/secretary and sometimes coach. Porky spent almost a decade in Vancouver in the hotel industry and then some time in the Yukon before returning to his family in Kirkland Lake, Ontario, a city still widely recognized as a hockey capital.

For this town, it is an immense source of town pride that an incredible 41 of its residents have played in the National Hockey League. In 1971, the Jones & Laughlin Steel Corporation of Pittsburgh, erected a tribute to recognize these individuals. Although it is doubtful whether Porky ever played NHL minutes with the Cougars, his is the first name inscribed on the stainless steel tribute. 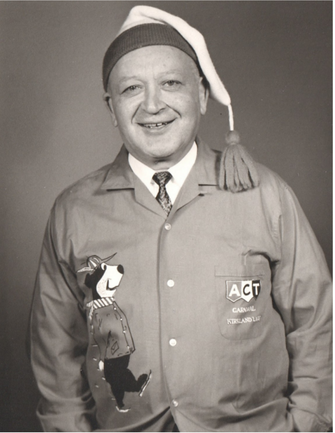 Circa 1965: Porky Levine spent almost a decade in Vancouver in the hotel industry and then some time in the Yukon before returning to his family in Kirkland Lake, Ontario, a city still widely recognized as a hockey capital. Courtesy of Irv Osterer

Levine retained his keen interest in sports and served as president of the Porcupine Old Timers hockey Club. He was chairman of the Associated Canadian Traveller’s Hockey Committee that honored the hometown 1939-40 Allan Cup Champions, and was a member of the local golf and curling clubs and active in the city’s Kiwanis organization. He died unexpectedly April 1, 1970, and was interred in the Beth Tzedek section of the Dawes Road Cemetery in Scarborough, Ontario.

No doubt Porky would be very pleased to see an NHL hockey team once again in Seattle, especially one owned in part by David Bonderman and Jerry Bruckheimer, two Jewish businessmen. Once again, hockey is being played at the elite level in the city that where he was so warmly welcomed at the beginning and end of his impressive professional hockey journey.

Irv Osterer is a writer based in Ottawa, Canada. He is a former contributing editor to Arts and Activities Magazine. He retired in 2020 after 40 years as a secondary school fine arts administrator and teacher of applied design and visual art. Until the COVID pandemic, he was a game right winger in the Barrhaven Men’s Senior Hockey League.

Author’s note: The author is indebted to Porky Levine’s nieces, Noreen Solomon z”l, and Joan Genender who inherited and shared their uncle’s rich scrapbook that was used extensively as source material for this article. They described him as a very unassuming, gentle man and a loving brother and uncle. They are elated to share his memory with Jewish hockey fans. Eric Zweig, Jeff Obermeyer, Don MacEachern, Roger Godin and Sid Finkelman z”l, also assisted with this story.