100 years of baseball on radio, a century of Jewish announcers 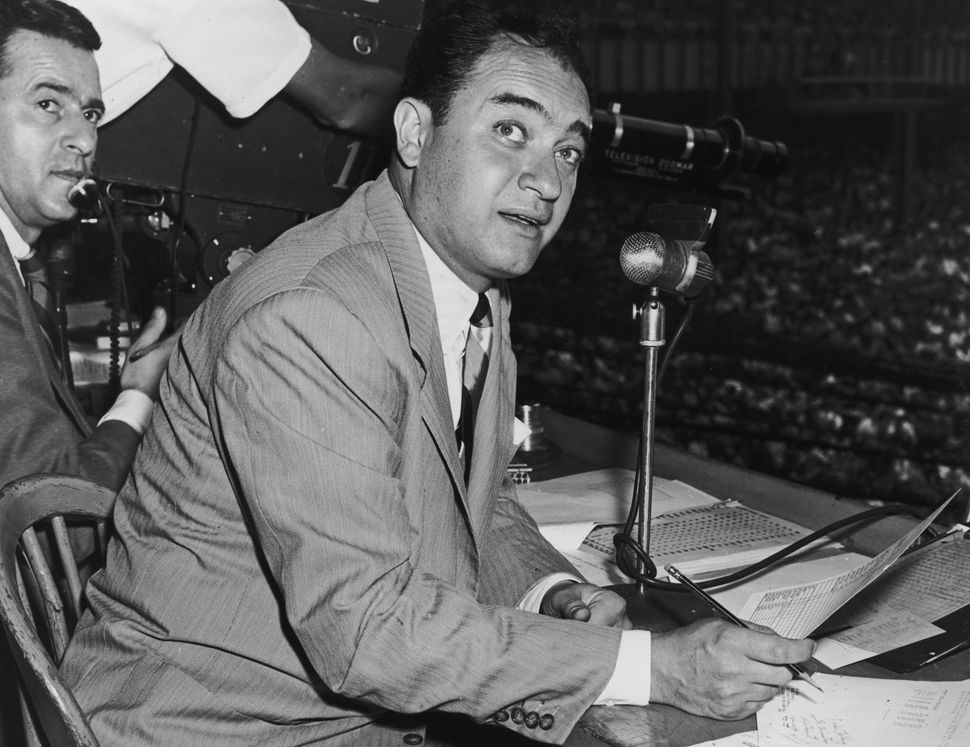 This month marks the centennial of the first live radio broadcast of a Major League Baseball game. Which provides as good excuse as any to examine the tragicomic lore of a century of Jewish baseball announcers.

Setting a precedent was Albert Stark, an umpire-turned-announcer in the 1930s who was nicknamed Dolly, because a player who shared his surname was also called by that sobriquet.

Stark was the tragic counterpart of Al Schacht, his boyhood friend on Manhattan’s Lower East Side and a pitcher known as the “Clown Prince of Baseball” for his antic routines on the field.

“There is talk that I am Jewish,” Schacht wrote in his memoirs, “Just because my father was Jewish, my mother is Jewish, I speak Yiddish, and once studied to be a rabbi and a cantor. Well, that’s how rumors get started.” 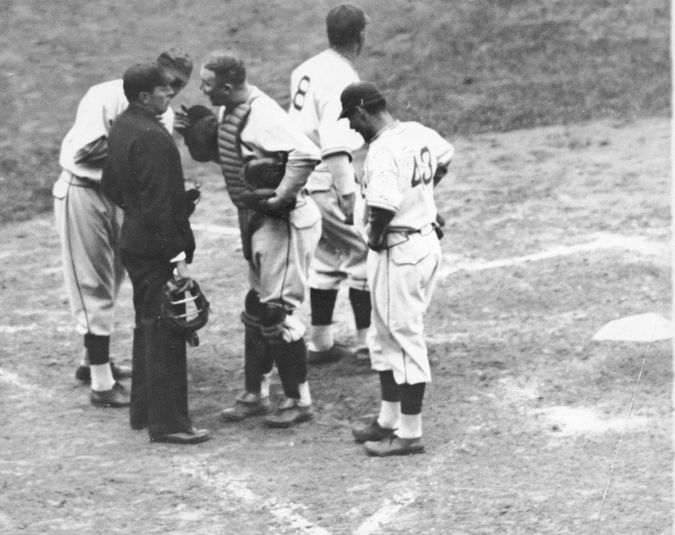 By contrast, Dolly Stark, although not averse to showboating during games, was burdened by decision-making; he was the first Jewish umpire of the modern era. Stark used radio broadcasting for Philadelphia baseball teams as an escape route in 1936, claiming he was underpaid for his league work.

Honored by players and the baseball commissioner, Stark nevertheless had to endure taunts from Chicago Cubs fans who shouted “Christ Killer” at him during games. He later tried employment as a scout, and although he discovered Jewish pitcher Saul Rogovin, Stark’s later career fizzled and he died in poverty.

For years afterward, media company owners saw Jews as commentators or kibitzers, roles that Howard Cosell (born Cohen) and Dick Schaap would assume, rather than as play-by-play announcers.

Mel Allen Israel changed all that. Born in Alabama, he truncated his name to Mel Allen on instructions from CBS Radio, whose president William Paley was another Jew in the business world whose name did not betray his origins.

Allen’s comfortingly empathetic Southern drawl endeared him to audiences nationwide. In a boyhood memoir, critic Christopher Lehmann-Haupt, of German Jewish origin, recalled listening to the radio when Allen’s “bronze gong of a voice would ring in the darkness around me,” conveying hope for victory.

Yet in 1964, Allen was abruptly fired by the New York Yankees for unspecified reasons.

Sports historian Curt Smith suggests that Allen coped with the grueling season schedule with treatments from Dr. Max Jacobson, the German Jewish physician known as Dr. Feelgood who was known for injecting celebs from Leonard Bernstein to Zero Mostel with amphetamines.

In 1996, after Allen’s funeral at Beth-el Cemetery in Connecticut, a tribute to the sportscaster was presided over by John Cardinal O’Connor at St. Patrick’s Cathedral.

Fellow Jewish sportscaster Marty Glickman was present. A former sprinter who was dropped from races at the 1936 Berlin Olympics, apparently because the U.S. Olympics team feared that a victorious Jewish athlete might embarrass Hitler, Glickman claimed he turned down an offer in 1948 to become a NY Giants baseball announcer due to inadequate remuneration. Glickman eventually did call play-by-play action in baseball and later mentored another Jewish sports commentator, Marv Albert (born Aufrichtig).

A briefer career on the airwaves was chosen by the Jewish pitcher Sandy Koufax, who after retiring as a player in the late 1960s, signed a contract with NBC as a broadcaster. Koufax quit after six years, reportedly due to discomfort with describing pitchers with approaches differing from his own and criticizing former colleagues and opponents.

A welcome contrast to these angst-ridden examples of Jewish broadcasters was Bob Wolff whose relaxed, self-assured buoyancy made him comfortable chatting with anyone.

Wolff’s professional longevity was preserved in over 1,400 recordings of broadcasts presented in 2013 to the Library of Congress.

His ease was reflected in later talents such as Al Michaels, a suave, polished, slightly prefab personality.

In an autobiography noteworthy for likening his mother Lila Roginsky to Joan Rivers due to a shared fondness for wisecracks, Michaels attracted media attention in 2015 by using the Yiddish word tuches on NBC’s Sunday Night Football broadcast. Michael claimed that a player was out-of-bounds by “half a tuches, what can I tell you?” 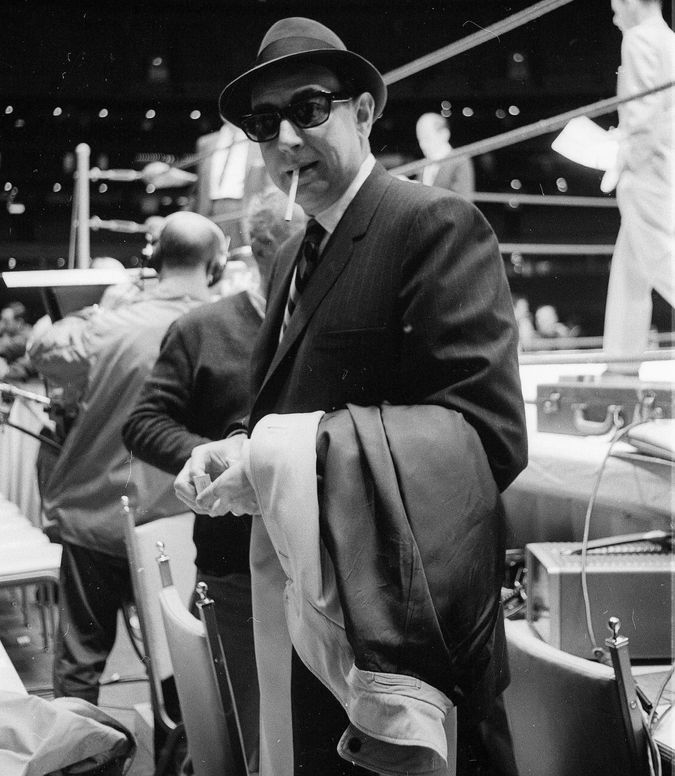 In contrast to such levity, Michaels would recall conflicts with Howard Cosell, who would arrive at work with a disdainful attitude about the relative importance of sports. Michaels told one blogger that Cosell “felt sports was the toy department of life, and he was trying to elevate the conversation. He would bring up the 1972 Olympics — the Munich massacre — all the time.”

This struggle over whether baseball should be considered a major concern of life or fodder for japes was later epitomized by John Sterling (born Sloss), longtime Yankees broadcaster. Sterling claimed to have learned the usefulness of catchphrases from the TV comedy show “Get Smart” written by Mel Brooks and Buck Henry (born Henry Zuckerman).

If the pitcher Masahiro Tanaka performed well, Sterling sang “The sun will come out Tanaka,” parodying a familiar tune from “Annie” by the Jewish songwriting team of Charles Strouse and Martin Charnin.

On “L’Chayim,” a 2015 Jewish Broadcasting Service (JBS) program, in homage to the show’s title, Sterling sang for Rabbi Mark Golub a snippet from the song “To Life” from “Fiddler on the Roof.” Sterling misattributed the song, by Jerry Bock and Sheldon Harnick, to Jerry Herman.

In his eighties, Sterling still interacts on-air with Suzyn Waldman, a multitalented sportscaster with Broadway singing experience who delivers the national anthem at games with brassy style. Yet confronted with Sterling’s clown prince antics, Waldman suppresses her inner Ethel Merman, instead conveying information gained from interviews. Waldman remains unperturbed when a discussion of the weather inspires Sterling to warble “It’s a Lovely Day Today” from Irving Berlin’s “Call Me Madam.”

In response to critics, Sterling told Sports Illustrated, “You could say I really don’t take myself seriously. I don’t think what I’m doing is helping mankind.”

Accepting the sportscaster’s role as amuser or tummler contrasts with predecessors, including Cosell, who agonized over the relative significance of baseball.

Although lacking all-out risibility, current highest achievers worthy of the legacy of Jewish baseball announcers include Gary Cohen and Howie Rose, both employed by the New York Mets organization, although currently in separate roles; Cohen is on SportsNet New York and WPIX and Rose on WCBS 880 AM.

In their sixties, and therefore mere striplings in the world of Jewish baseball announcers, Cohen and Rose preserve a human scale, displaying intelligence. Yet they are also capable of jesting within limits and conveying excitement vocally, although lacking the unique communicative genius of Mel Allen.

Cohen and Rose should be reteamed regularly, as together they sound like genial, high level orthodontists or other medical professionals diagnosing a case. Their erudition and plausibility point to a future for Jewish sportscasters where the choice is no longer solely between buffoonery or torment.

100 years of baseball on radio, a century of Jewish announcers