Thanks to some fine East End tailors, the Rolling Stones drummer was one of the best-dressed men in rock ‘n’ roll 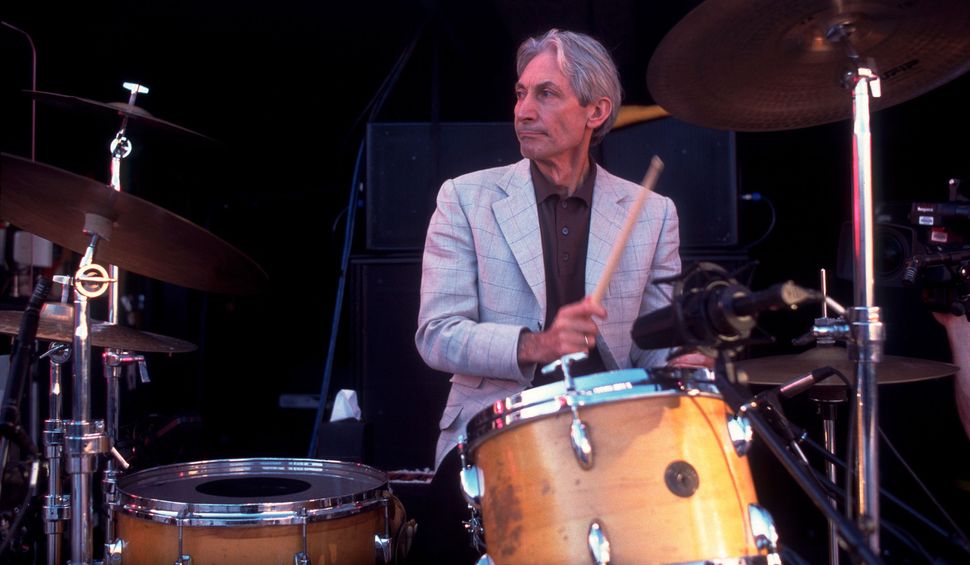 In spite of being the drummer for the most enduring rock band in history, Charlie Watts, who died August 14, 2021, at the age of 80, was really a jazz drummer, and all his idols and role models came from the world of jazz. For a long time running, Watts even led his own traditional swing band in the UK. Among his favorite jazz drummers was New York City-born Sheldon “Shelly” Manne, who played all styles of jazz but is best known for his work with the West Coast movement. Manne once recorded an album called “My Son the Jazz Drummer!” It featured hard-bop and soul-jazz versions of Yiddish and Israeli songs including “Bay Mir Bistu Sheyn,” “Di Grine Kuzine,” and “Yossel! Yossel!”

Watts attended art school and for a brief period worked as a graphic designer. His first job was working for Brooklyn-born Bob Gill, who was co-founder of a design firm in London. Before Gill gained fame as a designer, responsible for logos including one for a public radio series about “The Jewish Experience,” he played piano at summer resorts in the Catskills. Later in his career, Gill and an old army pal, Robert Rabinowitz, a painter, were asked to write and design a multimedia history of the 1960s, using Beatles music for its score. The result was “Beatlemania,” which ran for three years on Broadway and spawned several offshoot tours over the years.

Watts never totally turned his back on art — he designed several Stones album covers and was heavily involved in the design element of their stage shows. But music exerted its stronger pull on the budding drummer. According to Alan Clayson’s 2011 biography of Watts, the latter’s “first public engagements were with a so-so semi-professional unit whose principal stock-in-trade was Jewish wedding receptions. ‘I never knew what the hell was going on,’ confessed Charlie, ‘as I’m not Jewish.’”

Like most of his bandmates in the Rolling Stones, Watts served an apprenticeship in Blues Incorporated, a band led by English blues guitarist Alexis Korner, who was born in Paris to an Austrian-Jewish father and a Turkish-Greek mother. The band, which played hardcore blues clubs in London, served as a training ground for a whole generation of English rock musicians whose work was based in electric blues.

Besides drumming, Watts was also known as one of the most stylish dressers in rock. The Daily Telegraph named him one of the World’s Best Dressed Men, and in 2006, Vanity Fair magazine named him to the International Best Dressed List Hall of Fame. Like Leonard Cohen, Watts favored classic, traditional suits (although not while drumming). In an interview, Watts gave credit to his father for taking young Charlie to his tailor. “In those days you’d have a little Jewish guy in the East End in London, who made you things,” said Watts. In the same interview, Watts paid tribute to Bronx-born clothes designer Ralph Lifshitz, better known as Ralph Lauren. “Ol’ Ralph Lauren does some lovely things. His stuff is the sort I love — old English and Waspish Boston,” said Watts.

On June 3, 2014, a day before the Rolling Stones were to perform in Tel Aviv, Watts visited the Western Wall in Jerusalem’s Old City with Stones guitarist Ron Wood.