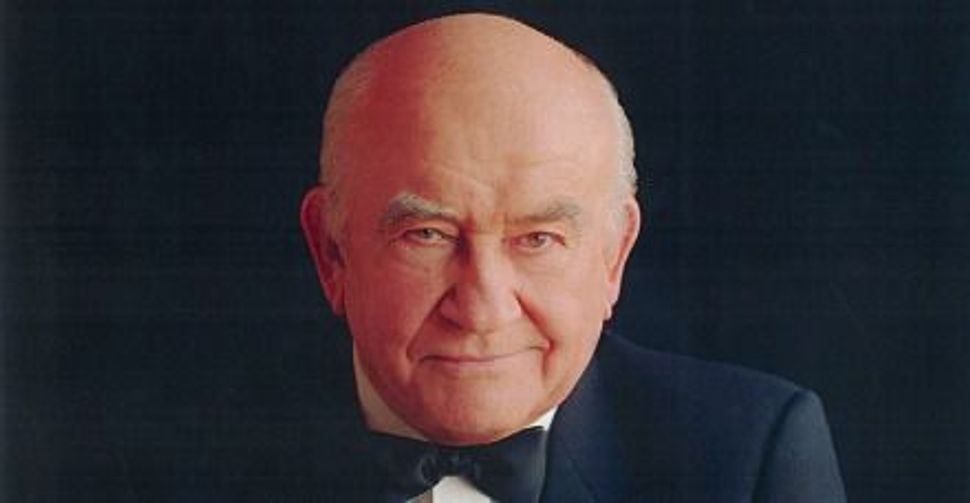 Editor’s Note: Ed Asner, who starred in ‘The Mary Tyler Moore Show’ and ‘Lou Grant’ died Sunday at age 91. Today, we look back on a 2012 interview with Simi Horwitz in which he spoke about Judaism, journalism and his final wishes.

Ed Asner was seated in a makeshift living room in a large, garishly lit rehearsal studio in the Snapple Theater on West 50th Street that formerly housed a beauty school. He had just emerged from a costume fitting and was eager to discuss “Grace,” Craig Wright’s new play about the misadventures of an innocent young couple (Paul Rudd and Kate Arrington) who plan to open a chain of Gospel motels in Florida.

The drama follows their evolving relationships with a deeply troubled neighbor (Michael Shannon) and a German-born exterminator, Karl (Asner), who is attempting to come to terms with his own tormented past. “Grace,” now playing at the Cort Theatre, represents 82-year-old Asner’s return to Broadway after a 23-year absence following his appearance in a revival of “Born Yesterday.”

“The play challenged my belief in God,” Asner said of “Grace.” “I don’t believe in God, though I’m not prepared to call myself an atheist either. You know the old phrase: ‘There are no atheists in foxholes.’ I’ve never been in a foxhole and if I ever find myself in a foxhole I’ll let you know if I believe in God or not.”

The Kansas City–born actor and activist, who is still best known as TV’s crusty editor Lou Grant, is at once edgy and charming in person, speaking in a low gravelly voice that at some moments is barely audible. He grew up in an Orthodox Jewish home, albeit one with a decidedly Midwestern influence. “My father was so religious he wouldn’t even eat in the shul,” Asner said. “But we didn’t walk to shul. We took the car.”

As a teenager, Asner toyed with the idea of a career in journalism. But when a teacher said he’d never make a living at it, he turned to acting. Not that this seemed to be that much of a viable prospect either. “I was too much of a Jewish bourgeoisie and acting wasn’t realistic,” he said. “I went into acting as psychotherapy, and it’s still a work in progress.”

Asner is no longer a religious Jew, though he identifies with Judaism culturally, “meaning I would hope if they began killing all Jews I’d rise to the occasion to say, ‘I’m pretty tasty.’” Long pause. “But if I’m a good progressive human being I’d say the same if they were killing all gypsies. I’d put on a gold earring and scarf and say, ‘hey, stranger, what about me?’”

At one moment during our conversation, Asner’s cell phone rang, interrupting us. He answered and spoke in a concerned voice: “Hello. How are you? Is everything all right?” Then, after a moment: “I was watching a pigeon. Either he was too young or he had been hit by a car. He was hovering by the subway grate as if the warmth made him feel better. It’s a funny thing about being around birds in the city and not trying to do something. I left him hopping around. And if your goose wasn’t hopping around I wouldn’t worry about it. I love you. Bye.”

When he was done with the conversation, Asner explained that the caller was his youngest son, who was at the Southern Connecticut State, studying environmental science and feeling deeply concerned about his pet Canadian goose, who had disappeared.

During a career that has spanned almost six decades, Asner has appeared in nearly 300 films and TV programs, and has earned seven Emmys, five Golden Globes, and a Screen Actors Guild Life Achievement Award. From 1981 to 1985, Asner served two terms as president of the Screen Actors Guild (SAG), during which time there were no strikes, and minorities and seniors gained visibility, he said. But it was the 12 years of playing Lou Grant that made him a household name, initially on the comedy “The Mary Tyler Moore Show” (1970-1977) and then in the dramatic series “Lou Grant” (1977-82).

The demise of the latter still troubles Asner, who insists that it was cancelled not due to failing ratings but rather because of his politics. “I was a spokesman for medical aid to El Salvador, so people thought I was giving commies money and I was branded a commie,” he said. “It was money for humanitarian purposes and it was blown out of all proportion. It was $25,000 from private donations. It was not taken from the union, which was how it was misrepresented.”

Asner maintains he was blacklisted for a period of time because he was viewed as a political liability, though more often than not the producers rejected him on the grounds that he was ostensibly “too old, too fat, or too overexposed.”

Asner continues to weigh in on controversial issues. He is an outspoken critic of Israel’s settlements in the West Bank, asserting that the growth of global anti-Semitism is largely the result of Israel’s refusal to establish peaceful coexistence with the Palestinians. And he is the narrator of a 15-minute DVD, “Solving the Mystery of WTC7,” which rejects the official view that following the 9/11 terrorist attack, the 7 World Trade Center building imploded because of widespread fires.

“Of course certain elements of the American government had to be involved,” said Asner. “I’m not saying George Bush pulled the plug or even knew about it. But when government policies and programs are not going well, you create a casus belli, an incident and a cause for war.”

At the moment, however, Asner’s thoughts are focused most intently on “Grace” and the challenges in bringing Karl to life, though he finds talking about how he gets into character distasteful.

“Some things should not be verbalized,” he said with a grimace. “They say making laws is like making sausages. You shouldn’t watch. It’s the same for acting, especially for the actor who works unconsciously.”

Looking back on his career, Asner contends that he would do nothing differently, though he might redo the way he lived. “Short of sex, I viewed myself pure as the driven snow. My self-examination could have been more rigorous. I could have been braver, better, more rehearsed for life.”

Asked if there was anything he wanted to add, he said, without missing a beat, “Bury my ashes in Mount Scopus.”

Simi Horwitz is a cultural reporter, whose previous credits include 17 years with Back Stage, and eight with Theater Week. Recently, she has contributed to Crain’s New York Business.