‘After Rosh Hashanah dine and dance at Black Cat Club’: The High Holiday ads of yesteryear An ad from The American Jewish World of September 11, 1936. Courtesy of NLI Historical Jewish Press

For me, Rosh Hashanah has always served as the informal start to fall fashion. And so last year, as I facilitated Rosh Hashanah services on Zoom, I found myself oddly missing the smells of the synagogue sanctuary on Rosh Hashanah — a combination of new suits and musty tallises.

So when I stumbled on a 1945 ad in Minnesota’s Jewish newspaper, The American Jewish World, reminding readers anticipating an early Rosh Hashanah to “Send your CLEANING NOW to the Modern Cleaners & Dyers,” I couldn’t help but grin. The smell of those musty tallises came right back to me, and it brought me joy. In a time when services were all remote, and I mourned my missed fall fashion preview, perusing Jewish newspapers’ old Rosh Hashanah ads made me feel connected to the excitement of the Rosh Hashanahs of yesteryear — to, in a way, all the experiences I, like many others, was so badly yearning for.

This year, as we confront a High Holiday season where some in-person contact is once more possible, but many services will remain remote, I’d like to invite others to experience that connection. The following ads, dating from the 1930s through 1970s, are a window into how American Jews of a past era prepared for the new year, including through bygone traditions like the sending of annual Rosh Hashanah cards. These ads trace the development of new traditions and routines connected to Rosh Hashanah as we know it in America. And for me, at least, they’re an important reminder of how precious our communal life is, and has always been.

Here are a few of my favorites. 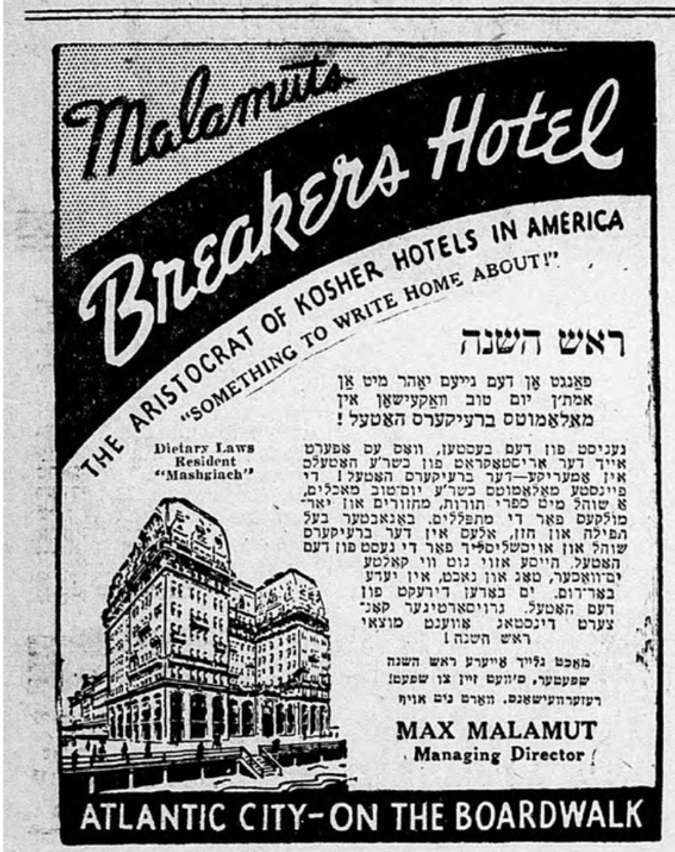 An ad for Malamut’s Breakers Hotel in Atlantic City from the Forverts, September 10, 1944. Courtesy of NLI Historical Jewish Press

Who wouldn’t want to spend Rosh Hashanah, a holiday that celebrates renewal, in the fresh air by the sea? I was surprised to see that so many Rosh Hashanah ads, as early as the 1920s, were for hotels, located everywhere from the upstate New York area that would quickly come to be known as the Borscht Belt to Atlantic City, NJ. If the quantity of ads speaks to the level of demand to get away for the holiday, it’s a wonder that any New York Jews remained in New York City for the High Holidays.

Each hotel highlighted the cantors who would be officiating at its services, as well as the amenities of the venue itself, including kosher food. I particularly enjoyed a 1944 ad in the Forverts for Rosh Hashanah at Malamut’s Breakers Hotel in Atlantic City. The hotel, it boasted in English, was the “The Aristocrat of Kosher Hotels in America” — “Something to write home about!”

In 1943, an English Chicago paper, The Reform Advocate, publicized Malamut’s Hotel Astor in Atlantic City, a sister to Malamut’s Breakers Hotel owned by the same prominent Jewish hotel family. “Unusually fine services will be conducted both days Rosh Hashanah, Kol Nidre, and Yom Kippur in the chapel of the Hotel,” the ad stated. My great-great-grandparents owned a hotel in Atlantic City in the 1920s, and I like to think that perhaps they might have helped to start this High Holiday trend. An ad from the American Jewish World of September 6, 1935 Courtesy of NLI Historical Jewish Press

Christmas cards took off as a trend at the end of the 19th century, and it seemed natural that, eventually, that new outlet for consumerism would seep into Jewish holiday celebrations as well. In “The Wonders of America: Reinventing Jewish Culture 1880-1950,” Jenna Weissman Joselit explained that due to the small size of the Jewish communities in America, holiday greeting cards gained popularity more slowly. But once communities grew, she wrote, “American Jews came increasingly to rely on the mails to convey the appropriate seasonal sentiments.”

I particularly appreciate this 1935 ad in a Minnesota periodical, The American Jewish World, which offers something of an admonition: “You need not send individual New Year cards to everybody you know. It is too expensive, too bothersome, and you can’t remember everybody’s name and address.” Their solution? By paying $1.25 — about $24 in today’s currency — readers could wish all of their “relatives, friends, and associates” a happy new year by placing a “greeting” in the Rosh Hashanah issue of the newspaper.

An ad from the American Jewish World of September 27, 1935. Courtesy of NLI Historical Jewish Press

By the 1930s, advertisers began working to convince new immigrants to cook with as many American-produced ingredients as possible. Some ads focused on ingredients from American companies that would be “necessary” for Rosh Hashanah dishes, including baking powder, flour and sugar. Baking powder in particular didn’t exist in Eastern Europe, and would have been a new ingredient to many Jewish homemakers. The more that Jewish immigrants cooked with these American ingredients, the ads implied, the more “American” they would become in the eyes of their Rosh Hashanah guests.

This 1935 English-language ad for Pillsbury’s all-purpose flour in The American Jewish World tapped into readers’ sense of tradition. “Try it in your Rosh Hashanah challahs, noodles, and cakes,” it urged. The ad also featured a dubious medical endorsement for the flour: “Its absolute purity is unquestioned, endorsed by the Committee on Foods of the American Medical Association.” An ad from The Sentinel of August 28, 1975. Courtesy of NLI Historical Jewish Press

Advertisers also promoted oil as a healthier ingredient in Ashkenazi Jewish cooking than schmaltz, or poultry fat, the main cooking fat used in the old country. A 1975 Planters Oil ad in a Chicago Jewish sold peanut oil as the natural companion to two symbolic Rosh Hashanah foods: honey and fish. The copy concludes, “So usher in a delicious 5736 with the sweetness of honey and the lightness of Planters Oil!” An ad from the B’nai B’rith Messenger of October 2, 1959. Courtesy of NLI Historical Jewish Press

As American Jews prepared to host Rosh Hashanah guests, papers ran ads for cleaning products families might add to their “Rosh Hashanah Shopping List.” An especially amusing example from Colgate-Palmolive features an attractive woman exclaiming “Be a 4-star housewife!” — with the stars written out as four individual Stars of David. The four stars referred to each of the four signature cleaning products in this Colgate-Palmolive family. An ad from the B’nai B’rith Messenger of September 9, 1960. Courtesy of NLI Historical Jewish Press

A 1960 Colgate-Palmolive ad, strikingly more religious-minded than its predecessor from the previous year, depicts the Biblical priest Ezra holding what appears to be the Ten Commandments. The ad, quoting from the Book of Nehemiah, explains that it was on the first day of Rosh Hashanah in the year 444 B.C.E. that the completed Torah was first publicly read in Jerusalem. The ad marked the start of a dedication to Biblical themes for Colgate-Palmolive: A 1962 Rosh Hashanah ad for the company in the B’nai B’rith Messenger cited Joshua, the leader who succeeded Moses. An ad from The American Jewish World of September 9, 1938. Courtesy of NLI Historical Jewish Press

While it seems that historically, the market for buying new clothing in the Jewish community was heavily concentrated around Passover — there were even Passover fashion parades! — sartorial concerns also arose during the High Holidays.

In 1936, an advertisement in the B’nai B’rith Messenger boasted “Just Received! For the High Holidays—100 Beautiful New Fall Frocks.” A 1938 ad for suits and topcoats from The American Jewish World, featuring a dapper American gentleman, hat-in-hand, read: “Only 16 days to ROSH HASHANAH… Make Your Selection Now from our large assortment of the world’s finest woolens…”

Hopefully by next year’s Rosh Hashanah, we’ll have traded in our loungewear for good and returned to our regular fashion routine — with the finest woolens around. 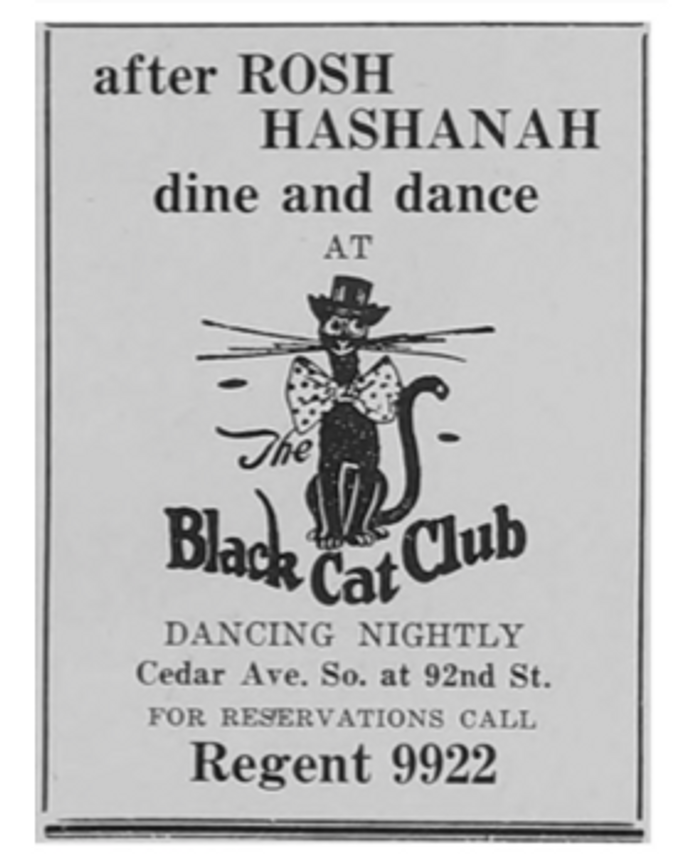 An ad from The American Jewish World of September 11, 1936. Courtesy of NLI Historical Jewish Press

Ever wondered how to spend your night after Rosh Hashanah is done? One unlikely 1936 ad had an answer: “After Rosh Hashanah dine and dance at Black Cat Club,” a night club located in Bloomington, Minnesota. Did two days of sitting in the synagogue really lead to a need for some fun? It turns out that in 1936, Rosh Hashanah led right into Shabbat, so it was a three-day holiday. I imagine that the Black Cat Club was buzzing by Saturday night. A happy new year, indeed.

Rabbi Yael Buechler is the Lower School Rabbi and Outreach Coordinator at The Leffell School in Westchester, NY. She is also the founder of Midrash Manicures.

‘After Rosh Hashanah dine and dance at Black Cat Club’: The High Holiday ads of yesteryear