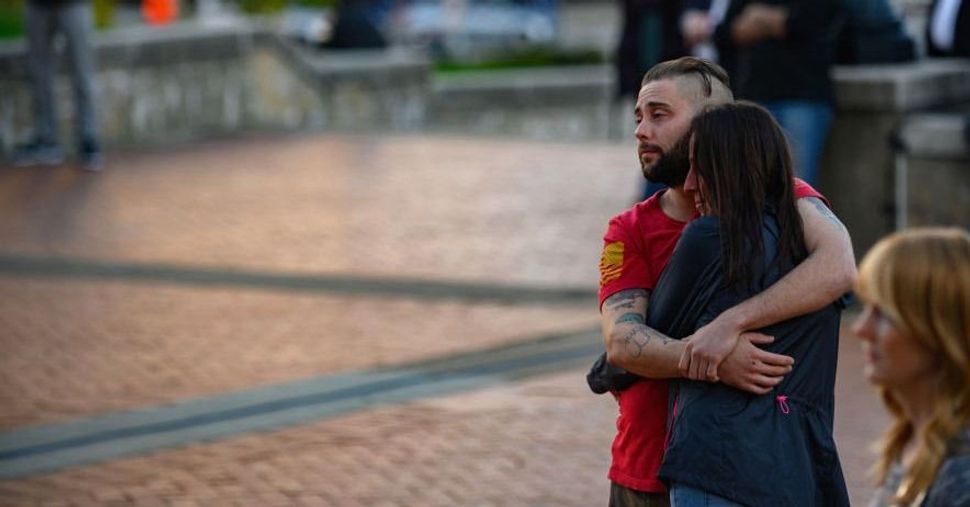 Attendees listen a public memorial service honoring the lives lost in the attack on the Tree of Life Synagogue at the Soldiers and Sailors Memorial on October 27, 2019 in Pittsburgh. Photo by Jeff Swensen/Getty Images

Mark Oppenheimer’s phone was buzzing incessantly. It was a Saturday in October 2018, and he was sitting in his parked car. He had just attended the bat mitzvah of a family friend in Massachusetts. As he scrolled through the text messages, he learned, like so many other people across America, that there had been an attack at the Tree of Life synagogue in Pittsburgh.

“I said, ‘Oh my God, there’s been a shooting in Squirrel Hill.’ And my daughter said to me, ‘Isn’t that where we’re from?’”

The Oppenheimers were among the founding members of the Pittsburgh Jewish community. Isaac Oppenheimer, Mark’s great-great-great grandfather, moved there in the 1840s.

“It felt like more than just another mass shooting,” Oppenheimer recalled. “It felt very personal.” 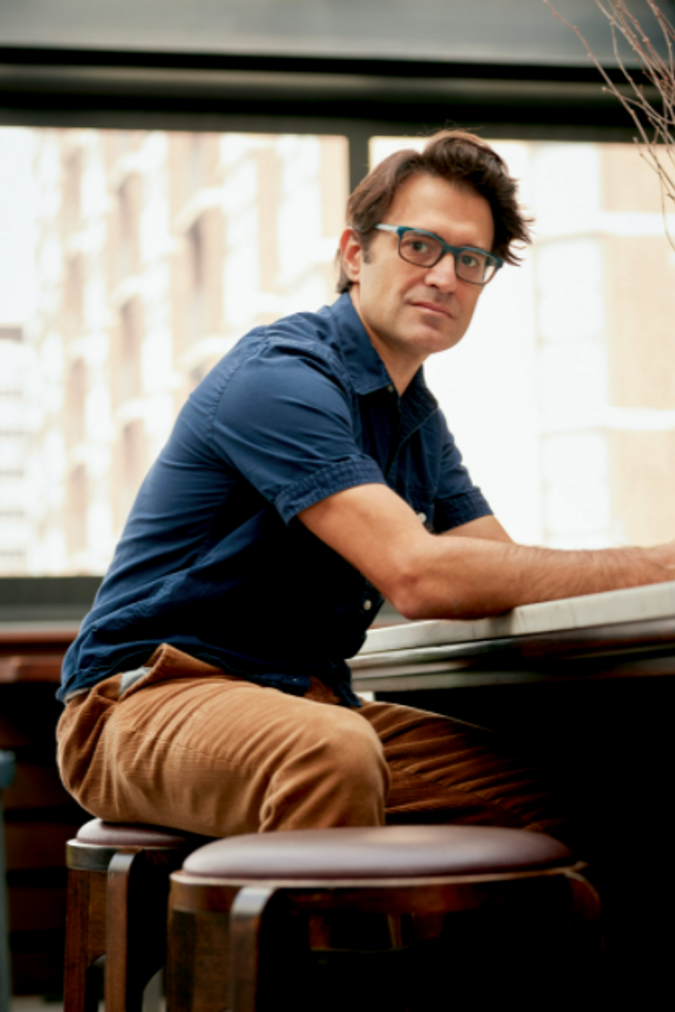 Mark Oppenheimer is the author of several books. His latest is about the attack on a Pittsburgh synagogue. Courtesy of Lotta Studio

Oppenheimer, a former religion columnist for The New York Times, decided this would be his next project. The result is his new book, “Squirrel Hill: The Tree of Life Synagogue Shooting and the Soul of a Neighborhood.” Its publication will coincide with the third anniversary of the tragedy.

I heard this story from Oppenheimer, 47, as we sat at his long kitchen table at his home on a quiet, tree-lined street in New Haven, Conn. He wore the uniform of a teacher in between semesters – a blue T-shirt, khaki shorts and a mop of hair so shaggy it’s possible it hasn’t been cut since before the pandemic. His dogs, Archie and Minnie, moseyed around, while his three-year-old son David napped on the nearby couch.

During the years he worked on the book, people would ask if working on such a morbid topic was depressing. “There are sad moments in reporting it, but it’s actually an incredibly hopeful story,” he said. “It was really about people helping each other, caring for each other, nurturing each other, helping each other heal and thrive. I actually found it one of the most uplifting things I’ve ever worked on.”

How a community rebuilt itself after the tragedy

Within days of the shooting, Oppenheimer was on the ground in Squirrel Hill, a Jewish neighborhood that some have described as similar to the fictional bar in “Cheers” – a place where everybody knows your name. Many of the families who live in the area have been there for decades or more. It’s a unique intermingling of denominations – Orthodox rabbis buying challah at the bakery inside the Giant Eagle supermarket chat with their Reform neighbors. Across the street, at Murray Avenue Kosher, the line at the deli counter is a communal hub on Friday mornings.

Thankfully for Oppenheimer, he wasn’t just a journalist parachuting in to cover a news story. His family still lives there and he wrote the book while sleeping at the Squirrel Hill apartment of his Aunt Elise and Uncle Dave. And yet, he didn’t know any of the victims personally.

In total, he went to Pittsburgh 32 times and interviewed 250 people.

The reporting came naturally to him. He’s written previous books, works as a contributing editor at Tablet magazine and hosts their popular “Unorthodox” podcast. He now directs the Yale Journalism Initiative. 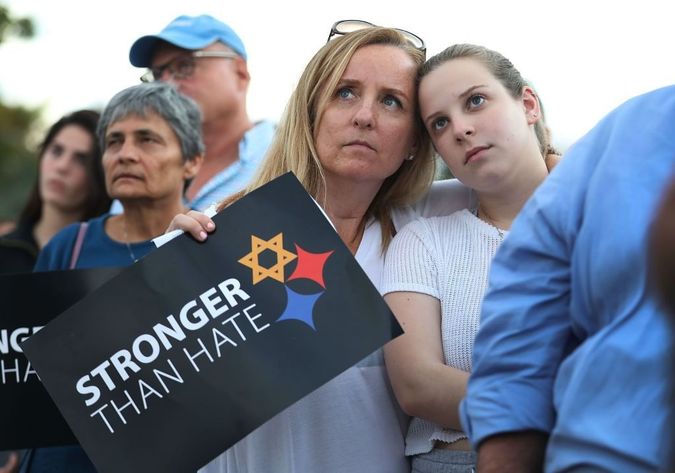 Iris Schaen and Jenny Schaen hug as they join with others for a solidarity vigil at the Holocaust Memorial Miami Beach to remember the victims of the mass shooting at the Tree of Life synagogue in Pittsburgh. Photo by Joe Raedle/Getty Images

“I became interested in the question of how a neighborhood like this would handle a terror attack,” he said. “This was an attack on a community of people who knew each other, loved each other, worshipped together.”

He was more curious about the aftermath of such an attack and how a community such as Squirrel Hill would rebound. “This is not a book about the shooter or the shooting, and it’s not really even a book about the victims,” he said. “The book is about how people’s lives change, about how the lives of the living change in reaction to a terrible crime.”

It’s about, he said, the random acts of kindness that happen in the aftermath of such tragedy. He ticked off examples: The Iranian-American student who raised one million dollars for the victims. A lapsed Roman Catholic who made the public art in the Starbucks window that came to define the streetscape in Squirrel Hill. The Orthodox Jews who performed funeral rites for secular Jews they had never met.

“So much of what religion does, at its best, is fight the worst aspects of American individualism,” he said.

Asked what he learned about the Pittsburgh Jewish community, he paused to ponder for a moment. The most interesting thing, he said, is how all the denominations are integrated with each other. “That’s so different from most Jewish communities. There is really a substantial overlap in the social lives and the communal lives of secular, Reform, Conservative, Orthodox, haredi, non-observant, Renewal.”

He hopes his book could serve as a blueprint for how other American Jewish communities can respond in the most trying of circumstances. “There’s a power in being in each other’s lives,” he said. “When the worst stuff goes down, how extremely important it is to be amongst other Jews who care and make your suffering their problem as well.”