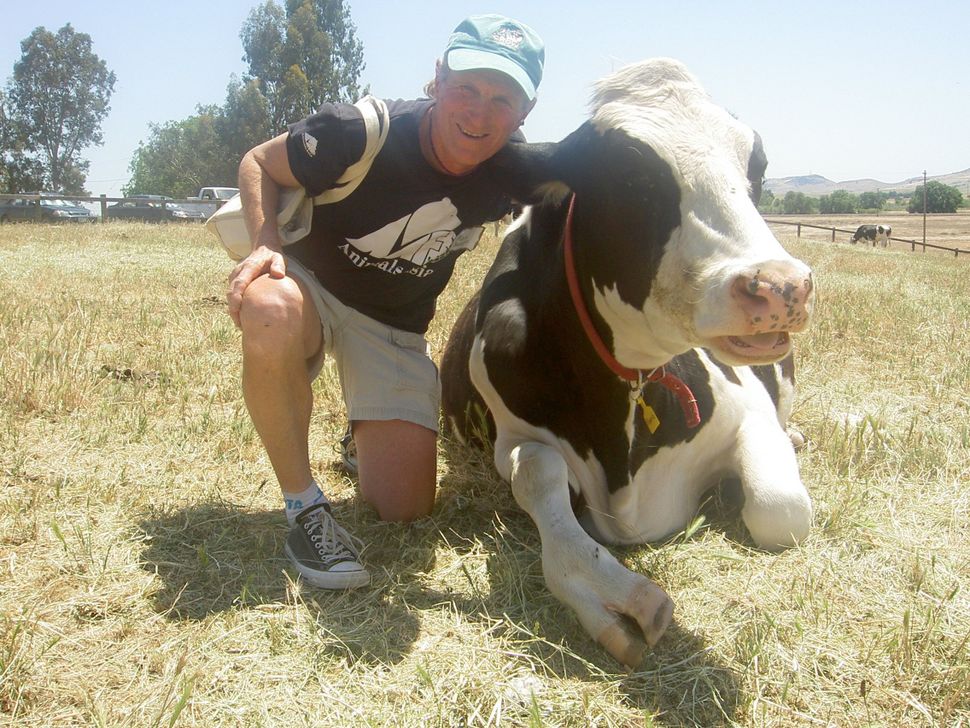 Marc Bekoff, an American Jewish biologist and professor emeritus at the University of Colorado, Boulder, has studied coyotes, dogs, penguins, fish, grosbeaks, and jays to understand their thoughts and emotions from a perspective of interdependence akin to the German Jewish philosopher Martin Buber’s “I and Thou.” Benjamin Ivry spoke to Bekoff from his home in Colorado about his lifelong study of why animals behave the way they do and what it means and about his new book “ A Dog’s World.”

You’ve stated that as a kid born in Flatbush, Brooklyn at the end of World War II, your Russian Jewish immigrant family advocated compassion and nonviolence for people, and you “just extended it to animals.” Was the motivation like Edgar Kupfer-Koberwitz, who after surviving Dachau concentration camp, found that his ordeals made him empathetic to other creatures’ sufferings?

Wow. I do like to think that compassion for humans spills over to compassion for nonhumans, but likely the reverse is also true. A lot of people with Russian Jewish surnames I’ve met fit the bill. My grandparents and parents all read the Yiddish Forverts religiously, so to speak, and were very compassionate, empathetic people. I also drew inspiration from my first cousin, the historian Robert Caro, whose mom was my mother’s sister. Bob’s always been my model for precision. Just be careful, he would tell me. Even if no one else knows whether something you write is correct, you’ll know.

Your “Encyclopedia of Animal Rights and Animal Welfare” notes that “Jews are required to make sure that their animals have been fed before sitting down to eat.” You’ve also cited studies mentioning that among homeless people, dogs eat first and “absorb empathy.” Might this prioritizing of dogs among Jews and homeless people be due to the history of the Jewish diaspora, involving a displaced, exiled people?

I don’t know. A friend of mine who is a clinical psychologist born in Brooklyn, where a large percentage of his clients were mostly Russian Jewish immigrants or children of immigrants once told me that he felt on average that these people had gone through hell and just had this empathy for living sentient beings.

Last year, a letter was written to the Texas Jewish Post, asking if it would be appropriate to recite Kaddish for a pet cat. A rabbi replied that Kaddish is about extending sanctification of the name of God, which would not apply to a pet. Would you have given different advice?

Yeah, I would say there’s lots of people who say prayers for their pets and companion animals. And in Canada at the University of Guelph they’ve installed a memorial stone dedicated to all the animals used in lab studies. I’m not even sure what it means, but without any scientific evidence, people latch onto the concept that humans have souls and nonhumans do not as an a priori view and that makes us better than, or more important than, nonhumans.

How can the controversy over kosher butchery be resolved? The idea of killing animals that have not been stunned offends animal rights activists, whereas defenders of the practice point to how in Fascist Europe, kosher butchery was outlawed, ostensibly to protect animals, but in fact as an antisemitic measure.

I don’t know. I mean, putting religion aside, and I don’t mean that in a pejorative way, I just don’t understand intentionally causing pain and suffering in the name of pretty much anything. When people say [the animal doesn’t suffer,] there’s plenty of science that says that a huge diversity of nonhumans suffer. To me that’s ridiculous and I don’t engage in those discussions. People who make comments like that aren’t open to any kind of reasonable conversation.

Rashi’s commentary on the Babylonian Talmud claims that God gave permission to humans to eat meat only after the Flood; Adam was previously limited to “herbs and vegetables,” but Noah was allowed to be an omnivore after the Creator saw that that the earth was corrupt and violent and a flood was necessary to wipe out the offenders. So meat eaters today still reflect some kind of acknowledgment of human iniquity?

I can’t answer that with any kind of credibility, apart from saying that a lot of meat eating is a habit. People eat what they are accustomed to eat when they are growing up. And that’s why there is so much of a concentration on kids by McDonalds and other fast food corporations using industrial food farms.

The French Jewish philosopher Élisabeth de Fontenay has suggested that like the author Isaac Bashevis Singer she sees the Holocaust as a tragedy of unique magnitude but also seeing parallels between factory farming and extermination camps. Is there any value to such metaphors, or are they unproductive for persuading others to treat animals better?

I don’t use them because they tend to really put people off. When people ask me about such metaphors, I say, I’m not going there; it puts people on the defensive. It tends to be a conversation stopper in meetings.

The theologian Jay McDaniel has asserted that your “Minding Animals” and “The Ten Trusts” are “invitations to a prayerful way of looking at the world of animals.” You’ve mentioned that although your parents celebrated the major Jewish holidays, since childhood you were never interested in religious observance, so would you discourage overtly spiritual interpretations of your books?

No, I loved those comments. Some of my colleagues asked me if I was upset that they were taking my work in this direction, but I thought it was wonderful. Over the years I’ve given talks in synagogues and shuls, churches, Quaker groups and others. To me what this says is this interest in nonhumans can span religions and cultures, and find meaning there. At one religious meeting, I commented that I’m not especially religious, and I was told, “Yes you are!” meaning that I had written about the spiritual lives of animals. I think that down the road, nonhuman animals could be a glue that pulls a lot of different people together in terms of compassion and conservation, so that the empathy people show to nonhumans, they will begin to show to humans as well.

One review of your “Rewilding Our Hearts” likened the book to the writings of Abraham Joshua Heschel, who promoted a general sense of wonder. Heschel once stated, “Our goal should be to live life in radical amazement.” Would you agree or is it too tiring to be amazed all day?

I think Heschel’s philosophy is wonderful and I would add to be radically in awe. Every day if I’m talking to someone or out on a ride or looking out my window, I’m in awe of the diversity of species, and it blows my mind that people aren’t in awe or amazed at the diversity of nature around them. I like the idea of living in constant amazement and awe and wonder. Every day I notice something and go, ‘Holy moley, that is just amazing!’