On an artist’s journey of discovery, embracing mythology while rejecting the bible

At an exhibit titled “Personal Mythology” by an Israeli artist, you’d expect to see some biblical references — perhaps an apple tree, or King David with his harp. But there aren’t any; Tarot cards, witches and alchemical creatures populate Ranei Mazor’s sculptures and dioramas.

“I have a very good history and record with the stories of the bible,” said Mazor. “My experiment turned to another phase, to me and the unknown. The familiar against the respected.” 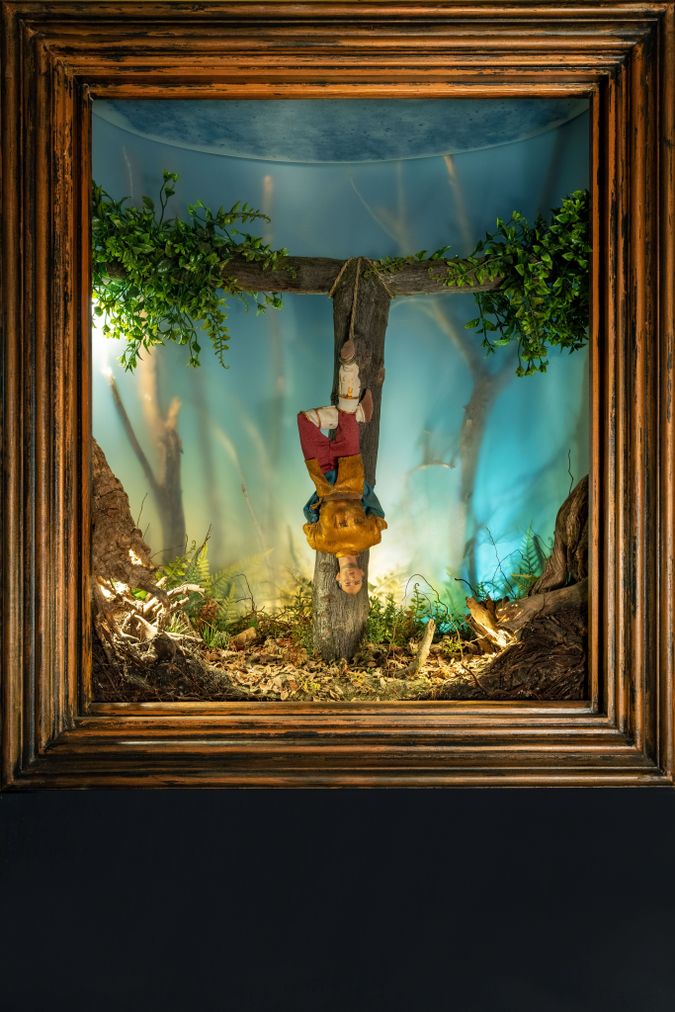 “The Hanged Man” draws from the Tarot card image by the same name, experimenting with the idea of changed perspective. Image by Ranei Mazor

The exhibit, at The Salon on Kingston, a Brooklyn event space, plays with the idea that mythology helps us access the beyond and posits that society’s movement toward science and rationality has distanced us from these more esoteric parts of the mind. The topic is all deeply personal, and the imagery has been chosen from stories that were pivotal in Mazor’s own introspective journey.

“I want to use the tool of art, and my two hands, to draw the landscape and the view that I see along the journey of my life,” he said, “and bring to life evidence of the milestones of moments and images that allowed me to break through into different places and explore territories of my mind.” 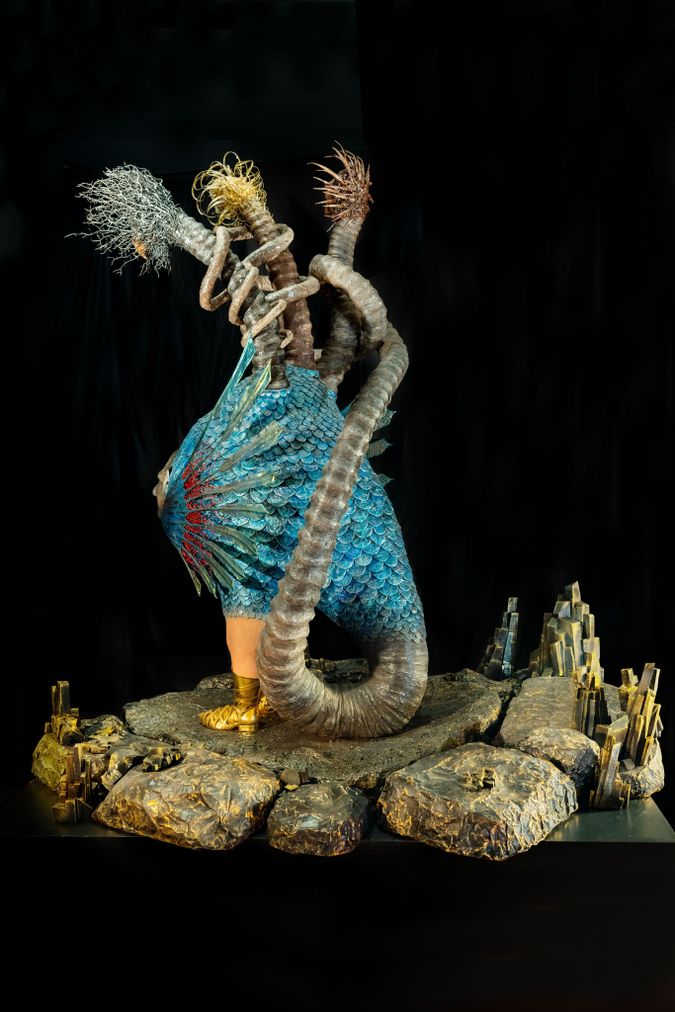 Mazor brought the “Personal Mythology” exhibit to Brooklyn all the way from his studio in Jaffa — each piece is displayed on the large wooden box it arrived in — and installed it at the Salon on Kingston, a former dry cleaners owned by his twin brother, Amber. A flamboyant all-white suit, abandoned at the cleaners, still hangs on the wall as a reminder of the space’s past life. The Salon, which often holds musical events on the sidewalk, arranged a raucous opening event for the exhibit, with a DJ and paella. 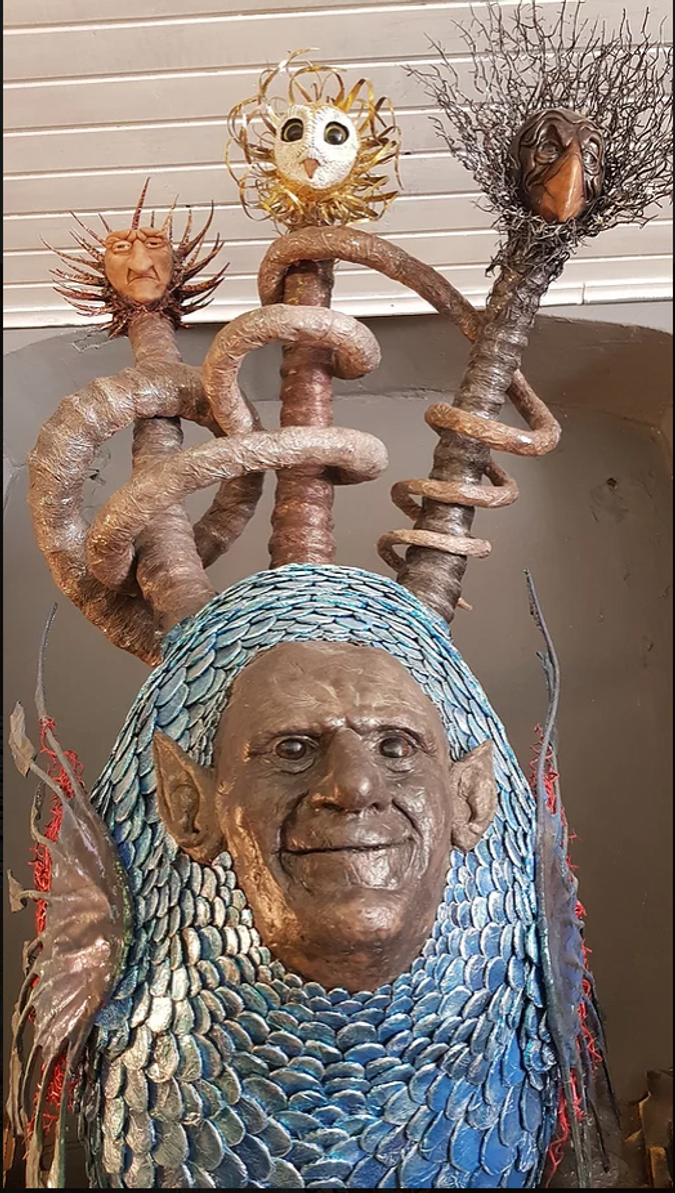 Alchemydes four faces, sculpted from clay, on a paper mache and leather body. By Ranei Mazor

There are five pieces in the small space, though one, “Flamerion,” is a video installation — the full artwork was too heavy and delicate to transport. Each approaches a mythological story as a “tool for navigation” of the mind.

“Alchemydes” is a hulking multimedia sculpture with four faces mounted on tentacles, a scaled body and human legs. The image is taken from the writings of Giovanni Battista Nazari, a Renaissance philosopher, who used the creature to represent the transmutation at the heart of alchemy; Mazor pointed out that alchemy encompassed a philosophy of transformation in addition to creating gold. Mazor’s rendering gives the monster’s main face a Mona Lisa smile, making it as inviting as it is grotesque.

Another, which was originally part of an exhibit Mazor created about refugees in Israel, requires the viewer to peer into a box to see a witch tending a bubbling cauldron. In each bubble that rises, there is an image that represents various strongly-held opinions and stereotypes.

“Stereotyping” requires peering through a slit in a large, dark box to see a witch cooking up various symbols. Image by Ranei Mazor

Mazor explained that each bubble shows an idea which becomes more fully fleshed out as the bubbles rise. By the top of the diorama, the bubbles have morphed into the kind of beliefs one can build an entire identity around.

Mazor has only been making art full time for about six years; he worked previously as a video game designer. When he began a Master’s degree in design, he said he realized he wanted to do something “more useful, in my eyes, more productive and more joyful.”

“Personal Mythology” runs through September 19 at the Salon on Kingston, 105 Kingston Ave, Brooklyn.

On an artist’s journey of discovery, embracing mythology while rejecting the bible