If it’s Sukkot, it’s rollercoaster time all over America — a pulse-pounding thrill ride of a photo essay 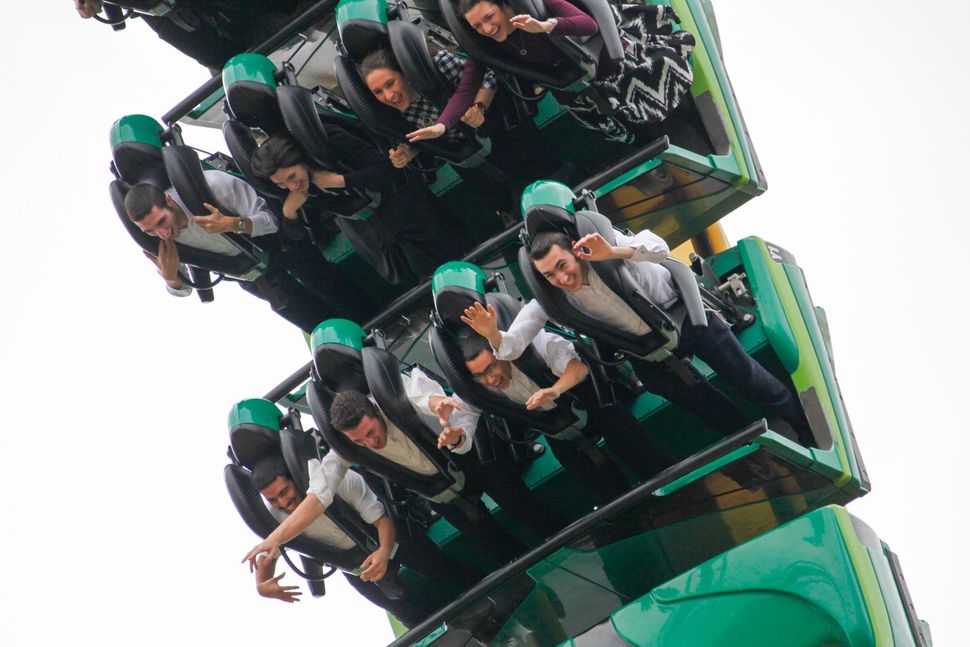 Upside-Down: A different angle on the festivities on what has become known as #JewDay. By Andrea Robbins and Max Becher

Sukkot is one of Judaism’s three pilgrimage festivals, when our ancestors trekked to the temples in Jerusalem to make sacrifices. Now, many Orthodox Jews in the New York area make a different sort of holiday pilgrimage — to amusement parks.

During the week-long holiday’s intermediate days, known as chol hamoed, restrictions on work, driving and using electricity do not apply. But the commandments to celebrate and be happy — another name for Sukkot is, zman simchateinu, literally “our time of happiness” — do. And so, over the years, these interim days have become occasions for one-day chartered bus trips, booked months in advance. 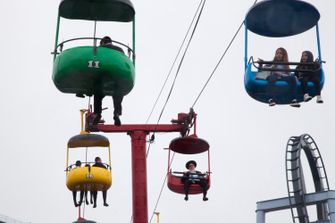 A View From Above: Some amusement park attendees enjoy the more contemplative rides. By Andrea Robbins and Max Becher

Thousands of residents from the tri-state area converge on places like Hershey, Pennsylvania, for what is known informally as “Jew Day” (or #Jewday) which is said to be the largest annual gathering of Jews in the United States. A few years ago, my partner Max Becher and I decided to make the pilgrimage ourselves to see what it was all about. 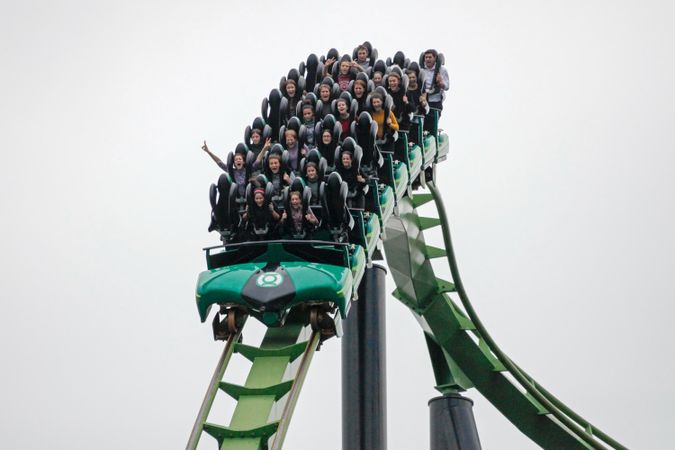 All Downhill From Here: A view from the peak of a rollercoaster. By Andrea Robbins and Max Becher

I looked into a bus-park package deal, but for convenience’s sake, I opted to drive to Hershey. When I pulled into the park, the first thing I noticed was that all the big buses transporting people meant there were fewer cars and lots of parking spaces close to the gate. I pulled in at the same time as a few SUVs filled with large families and giddy children. Everyone was all smiles, including me. 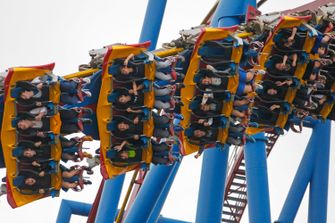 Assuming the Horizontal: Revelers ride the rollercoasters. By Andrea Robbins and Max Becher

I unpacked my gear and greeted my car-neighbors, and we walked together to the front gate where, I purchased my ticket from an Orthodox man working the booth. Entry to the park is not restricted to the religious Jews, of course; anyone can go to the park on chol hamoed. But this was clearly their day. 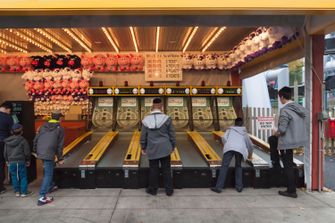 Throwing for Points: Taking time out to enjoy the arcade games. By Andrea Robbins and Max Becher

Walking past the gate and into the park, I experienced a surreal physical feeling in my gut. I had felt something similar once before, when my flight touched down in Israel. It was not the feeling of being on holy ground, but the tectonic shift of feeling like part of a majority, and not a polite but uninvited guest.

I’m not a very observant Jew, but I did feel a sense of mischpocheh — family — being surrounded by men who reminded me of my father. I could imagine them reaching for a butter knife rather than looking for a screw driver. I approached and chatted with women my age by beginning with a criticism wrapped in an observation; my mother’s standard icebreaker. And break the ice it did. 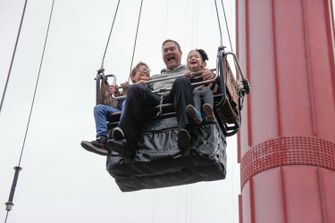 Up, Up and Away: A father and his two daughters on a parachute ride. By Andrea Robbins and Max Becher

The main mitzvah of Sukkot is to eat in the sukkah, a temporary hut meant to remind us of our ancestors’ time wandering in the desert. And so a large sukkah is erected on the grounds of Hershey Park. Trucks sell kosher food, and many people bring their own picnics and drinks.

Fearless children lead wary parents — some fathers in white knee socks; mothers in sheitels or kerchiefs — through the maze of a park that they mentally mapped on past visits. 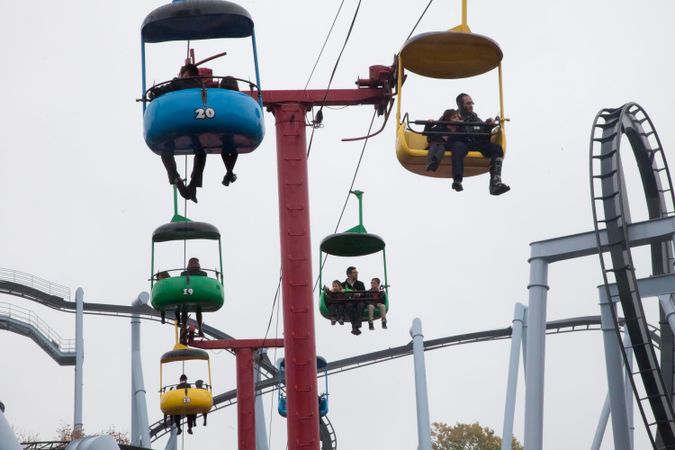 We Have Lift-Off: On Chol Hamoed, parkgoers check out the view from above. By Andrea Robbins and Max Becher

The very religious and very young tend to gravitate toward the slower rides. Boys and girls dressed modestly sit separately; sometimes, young married couples place themselves in between the gendered sides. Teenagers head for the rollercoasters where boys’ skullcaps take off into the air like little flying saucers at each round of inversion. 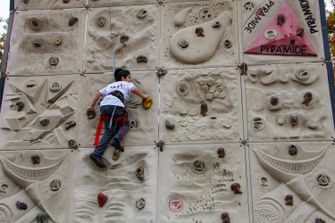 Driven Up the Wall: A child enjoys wall climbing during his day at the park. By Andrea Robbins and Max Becher

At the end of the day, the ground beneath the rides was polka-dotted with yarmulkes; a good time was had by all. 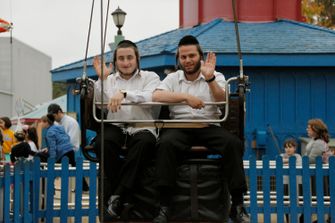 On Their Way: Two parkgoers wave at the start of their ride. By Andrea Robbins and Max Becher

Andrea Robbins and Max Becher have worked together for more than 30 years, photographing and making films about cultural dislocation. Their work is included in the collections of The Whitney Museum, Guggenheim Museum, Jewish Museum and the San Francisco Museum of Modern Art among others. their website is robbinsbecher.com

If it’s Sukkot, it’s rollercoaster time all over America — a pulse-pounding thrill ride of a photo essay