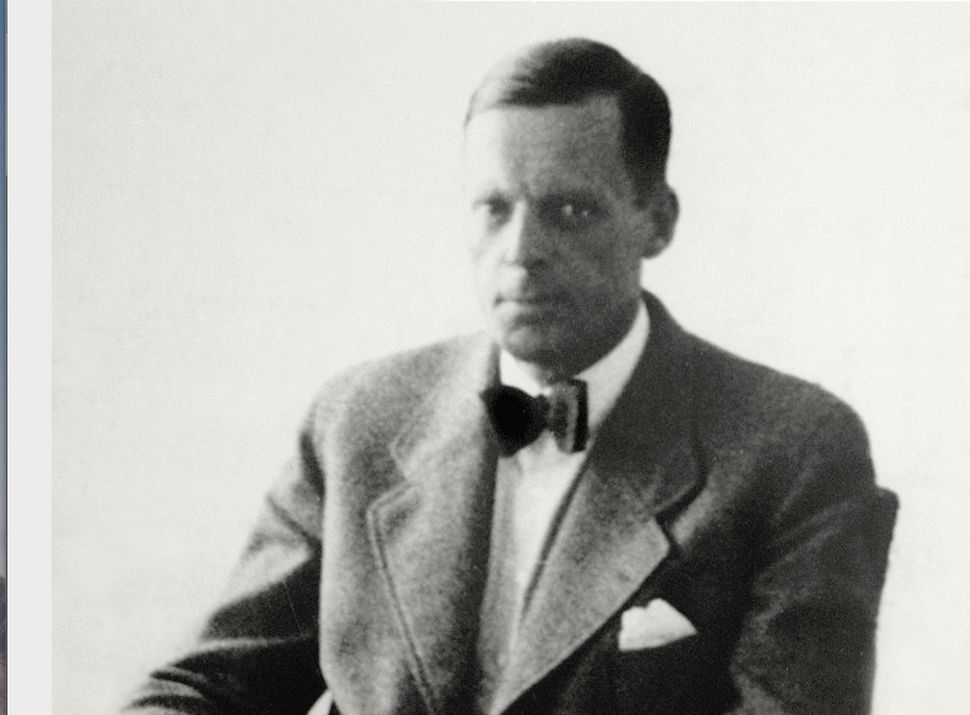 Jan Brokken’s “The Just” recounts how in wartime Lithuania, Dutch consul Jan Zwartendijk and Japanese consul Chiune Sugihara saved thousands of lives by issuing permits admitting Jewish refugees to the Dutch colony of Curaçao by way of Japan. Yet only in 2018, after the original edition of “The Just” was published in the Netherlands, was Zwartendijk’s contribution fully appreciated there and in Lithuania. Brokken’s previous “Baltic Souls” (2010) celebrated creative Estonian, Latvian, and Lithuanian Jews. He recently spoke with Benjamin Ivry about how Zwartendijk managed to accomplish his mitzvot.

Steven Spielberg reacted to your book by saying that had he known Zwartendijk’s story, he would have filmed it instead of “Schindler’s List.” Yet the filmgoing and reading public seem to favor flawed antiheroes like Schindler. Did Zwartendijk have any villainous side?

No, I don’t think Zwartendijk had any dark sides. Of course, in my research I was looking for that, but I didn’t find it. Steven Spielberg made that comment to Zwartendijk’s son during a fundraising dinner in New York organized by a rabbi from Jerusalem in recognition of Zwartentijk’s good deeds. 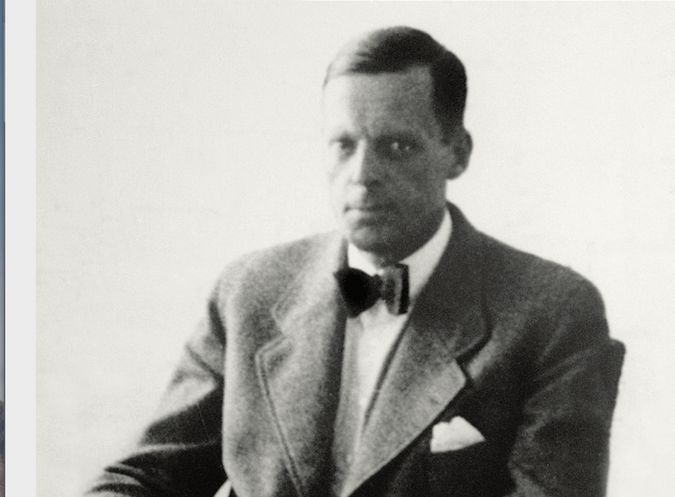 You describe Zwartendijk as lacking ambition and perplexed by definitions of virtue — would he have liked being labeled a hero?

He did not consider himself a hero, and that was his honest opinion. He truly believed that every human being who had the possibility to do what he did would do the same thing. You and I know that isn’t true, but he believed it. I searched for possible political or religious motivations, but found none. He was the perfect citizen with democratic liberal opinions. He was not a very religious Protestant. There was certainly an influence of the Christian culture. He felt that if strangers are knocking at your door and are in danger, you must help them. That was his strict opinion and he acted accordingly. I received a letter from an old Jewish lady, who said she was sad about my book because she felt so much more would have been possible, had there been more people like Zwartendijk. So many more people would have been saved had more diplomats and politicians been like him.

You note that the Dutch Jewish journalist Louis Aletrino was Zwartendijk’s dearest friend, which may have motivated his benevolence, yet Chiune Sugihara, who had comparatively little interaction with Jews, was also compassionate. Can Zwartendijk’s association with Aletrino really explain his actions?

I think it opened his mind. Zwartendijk was a businessman and salesman. He wasn’t a cultural person, but Aletrino was the opposite. They shared an apartment in Prague and Aletrino took him to the restaurants and pubs in the Jewish quarter of Prague in the days of Franz Kafka. Jews were no longer strangers for Zwartendijk. That was the first step.

Masha Leon, the longtime society columnist for The Forward and daughter of Mordechai Bernstein, contributor to the Yiddish Forverts, escaped by routes made possible by Zwartendijk and Sugihara. She died in 2017; as that generation disappears, will it be more difficult to write about them?

There are a lot of children and grandchildren who want to know more about their parents and grandparents. No, I think it will go on. Chronicler of the Just: Jan Brokken has previously written about the young people who died because of government’s obliviousness to the AIDS epidemic. By Jelmer de Haas

Zwartendijk’s boss L. P. J. de Decker, the Dutch ambassador in Lithuania who devised the scheme for issuing visas and authorized its use, left no documents or progeny. And unlike the handsome Zwartendijk, De Decker was, you write, “bald. Long face, crooked nose, sunken cheeks… [a] nervous wreck, a sourpuss, a gastric patient, or maybe all three.” Is it unfair to require heroes to be photogenic?

Yes, yes. De Decker was really a diplomat in all senses. He had lengthy experience as consul, and that was the most important. He knew exactly what were the possibilities for visas, not to be outside the law, but to stretch it a little. De Decker was really the little bureaucrat, but they too can be heroes.

Does focusing on a few European consuls who saved Jews overshadow the fact that they were a minority, and almost everyone in positions of power failed to help?

Yes, that’s true. Zwartendijk was officially reprimanded by the Dutch government in 1964 for having disobeyed the rules, which was tragic for him. He had been optimistic with an open mind, but after that moment, he was a troubled figure. He had trauma. Since the book was published, I have been invited to speak to diplomats and consuls who see Zwartendijk as an example for them, how to act and not always follow protocol. To see what is in the spirit of the law and not always exactly the letter of the law. And the action of a diplomat must be in the first place humanitarian. 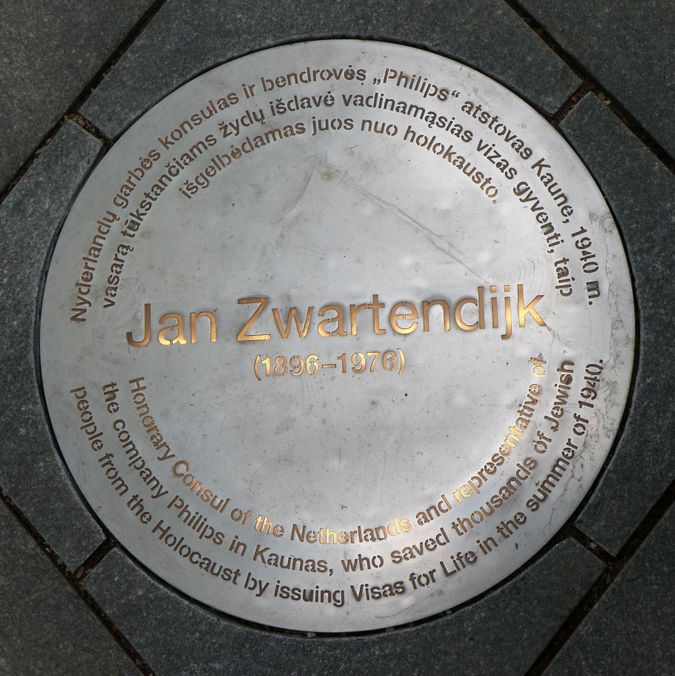 Honoring Jan Zwartendijk: A plaque in Kaunas, Lithuania, honors the Dutch diplomat who helped to save the lives of thousands of Jews. By Getty Images

Since over 95 percent of Lithuania’s Jewish population was massacred during the three-year German occupation, the worst loss in any nation during this era, are recent gestures like installing a light sculpture in Lithuania in Zwartendijk’s honor adequate?

When I started my research, I had a lot of help from the Lithuanian government. I met with the Lithuanian Minister of Foreign Affairs who said we must look at the reality of history, and all the archives were open to me. A Lithuanian Jewish community representative was assigned to make sure I had access to all the information I needed. The book was published and the light sculpture was inaugurated by the King of the Netherlands and the Lithuanian president. I thought these were steps forward. There was question of translating my book into Lithuanian, so that the young generation of what was known as a very antisemitic country could be informed about what happened. But I received a letter from the prospective publisher who said he couldn’t publish it because it is too negative about Lithuania. I was very upset by this. I didn’t expect that after all the help I received from Lithuanian politicians.

Are there any parallels in your books about untimely wartime deaths, such as “The Just” or “Retribution” about a Dutch village and later young victims who died from official obliviousness to the AIDS pandemic, like your friend the Russian pianist Youri Egorov?

Yes, I think it’s one of the major themes of my books. Youri Egorov was my best friend. He was a remarkable person, and a genius at the piano. He was such a bright mind. I also learned from him about the situation of the Jews in Russia. Yakov Izrailevich Zak, Egorov’s teacher and mentor, was Jewish. He was one of the first winners of the Chopin competition in Poland, but because he was Jewish, he couldn’t make a career in the Soviet Union during Stalin’s antisemitic campaigns. So Zak became a teacher. Youri was deeply interested in the Jewish religion and the cultural background of Zak. They shared a humanistic or even religious idea about music behind the notes. Youri also had visa problems as a refugee in the Netherlands. That was the first time that I heard about problems with visas.