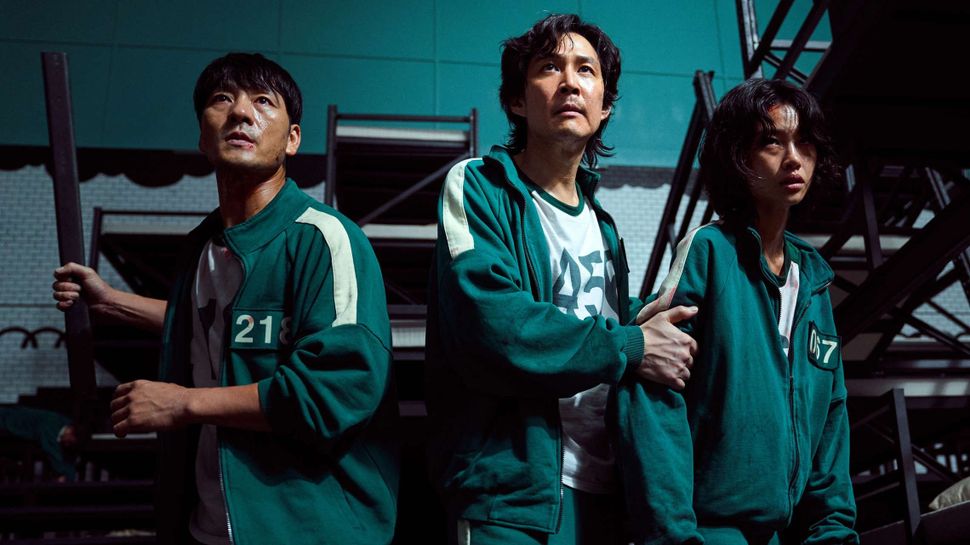 Some of the stars of “Squid Game.” Image by YOUNGKYU PARK/Netflix

“Squid Game,” a Korean-language Netflix series, was a surprise hit; while executives expected it to be a major success with its native audience, it’s currently on track to become the platform’s most-viewed series ever, with interest still building, according to Ted Sarandos, Netflix’s co-CEO.

The plot is sort of a “Hunger Games” meets Japanese game show. Over 400 people have been invited to compete for money without being told what, exactly, they’ll be doing; after they consent, they are picked up, drugged and taken to a mysterious facility where they wake up in a giant room full of tiered beds, and dressed in matching tracksuits marked with their assigned number.

The first game, a version of “Red Light, Green Light,” reveals what the catch is: When you mess up, you’re instantly eliminated from a game with a bullet, efficiently cleared from the field by masked guards and cremated; your family is never notified of your demise. With each death, the prize money increases, pouring into a giant spotlit piggy bank; each person’s life is calculated at 1 million Korean won, or about $84,000. Yet, despite their horror as over 200 of their competitors are murdered in that first game, the contestants continue to play, and each successive game is worse and more morally fraught.

Why would anyone agree to this? The answer, of course, is desperation; every contestant is deeply in debt, often with a parent or child depending on them or the expectations and honor of their families. They feel like they have no choice other than to risk their lives and morality playing a deadly game.

So, it’s fitting that “Squid Game” was released right as we began the shmita year.

Shmita years, which are first mentioned in Deuteronomy, occur every seven years and require us to reset both the earth and society by leaving fields fallow and forgiving debts. Today, most people believe that shmita laws only truly apply in Israel, and only with regards to farming. Even then, the letter of the law is embraced over the spirit; for example, farming in greenhouses is not impacted because the plants do not grow in the literal land.

Some Jewish activist groups use the texts of shmita to inspire or guide their work on climate change or social justice. But the idea of literally following the laws, literally forgiving debt or pausing the economy is unimaginable today. If we forgave debts, the economy would collapse! I mean, right?

On the other hand, most millennials are drowning in college debt, and people crowdfunding to pay off insurmountable healthcare bills is basically its own category of supposedly-heartwarming-but-actually-dystopian local news story. The U.S. government, which is trillions of dollars in debt, nearly defaulted on its bills this week. 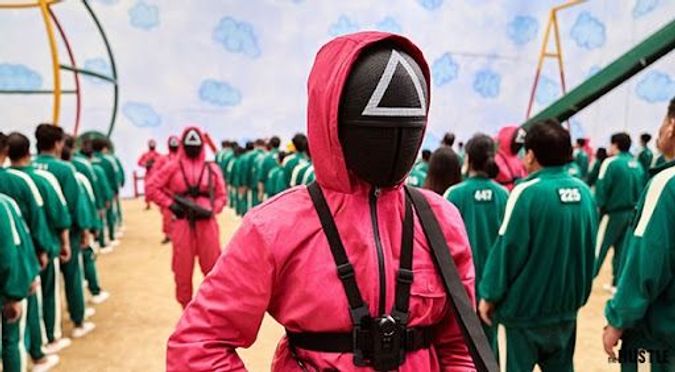 The anonymous guards’ ranking is conveyed by the shape on their mask; the mid-level triangles are in charge of shooting the losers. Image by NETFLIX

Like its fellow Korean-language hit, the multi-Oscar-winning “Parasite,” “Squid Game” is basically a horror film about class warfare. It skewers the idea of the American Dream, that we are or have ever been on even footing, equally able to succeed, and that there is any such thing as fair play in our economic system.

The games are run by a shady cabal of elaborately disguised, wealthy men from around the world — they speak English, not Korean — who seem to believe that they are evening the playing field, giving the desperate contestants a real shot at success, and they jealously guard the game’s integrity.

When one contestant cheats, making deals with the masked and anonymously numbered guards in order to get hints about the next game’s content, he is publicly hanged and the gamemaster earnestly apologizes to the contestants about their failure to keep the game fair. Of course, everyone who makes a misstep in the next game will still die, often murdered at the hands of their fellow players, but that’s fine; it’s by the book — they all had an equal chance to win, or to kill each other, so it’s fair.

At one point, the competitors attempt to quit — they’re allowed to end the games provided the majority agrees — and they go back to their normal lives only to realize their days are nearly as awful and full of moral dilemmas as the games are. Nearly everyone returns; as long as they are so deep in debt, even the insanity of games is worth it.

Of course, nothing about this is fair. The people in debt might be on the same level as each other, but they’re still mere toys for those in power, pitted against each other by wealthy puppeteers who take amusement in the struggles of the lowly competitors.

It may be nearly impossible to imagine simply forgiving debt or actually observing shmita in our modern capitalist society. But “Squid Game” is a clear story of what happens if we refuse.