Pete Simpson, Emily Davis and Will Cobbs in “Is This A Room.” By Chad Batka

Most of Tina Satter’s plays dance around plot, focusing less on events than small, weird, moving micro-moments. This isn’t true of her most recent work, “Is This A Room,” currently on Broadway.

In 2017, Satter read the transcript of the FBI interrogation of a young intelligence specialist named Reality Winner, who leaked an intelligence report about Russian interference in the 2016 Presidential elections to the media. In 2018, Winner received the longest sentence ever imposed under the Espionage Act.

Satter knew immediately she wanted to make the interrogation into a play, and that she wanted to use the verbatim transcript as source material. “I never wanted to move anything around or try to give it a different spin,” she says. “It felt so pure and strong as it was.”

In a sense, “Is This A Room” is all plot: it is a conversation about something that happened. But despite the hyperrealistic text — Satter kept even stutters and unexplained sonic intrusions — Satter’s direction makes the interrogation feel surreal. The play eschews a traditional set and leans into nonsense moments in the dialogue. Characters stand in ways people normally don’t, touch objects that do not exist, and assemble in illogical formations. It’s an astonishing production, employing unusual staging choices to create a devastating emotional map of Reality’s experience.

Satter, whose father is Jewish, grew up in what she describes as a “preppy, upwardly striving, WASP-y town.” She wasn’t raised religious, but says she’s grown more interested in exploring Judaism recently. She likes that, in New York City, Judaism “is really present and especially is sort of knit into arts communities; the way discourse is this ongoing conversation.”

“There’s this sort of inherent sense of what I’ve come to think of as Talmudic thought or questioning — here’s an idea, but let’s question it, and let’s discuss,” she says. “That really relates to how I think; my curiosity, my experimentation, and I think even being a maker, an artist.”

She spoke to me from upstate New York, where she moved earlier in the pandemic.

“Is This A Room” is presented at the Lyceum on alternating nights with Lucas Hnath’s “Dana H.” Both close November 28. This interview has been edited and condensed for clarity.

Eliya Smith: So I wanted to start out by asking you about your work prior to “Room.” One of your pet interests is adolescence, specifically female adolescence. What draws you to that age?

Tina Satter: It’s just such rich terrain in so many ways. You’re just in this ecosystem of other people coming into their own. And I really like teen-speak, or even sibling-speak, because I really like coded ways that we make meaning. I mean, obviously, theater is all about making meaning in a new world — for whatever the play is, even if it’s super-realistic.

Life at that time feels really like it’s just so rich and big. There’s that feeling of “everything is new and wild, and I’ve literally never felt this before” — in adolescence, you’re literally feeling that all the time, and feeling big things.

And then culture is like, oh, we’re supposed to move through that. And I’ve always had this obsession with: why? Why aren’t those sorts of feelings still a feeling we should have or could have? And there’s so much more in a female version of that, or a queer version of that.

There’s a freedom to adolescence and teenagedom, too; like, how you dress and try on makeup and have super weird ponytails. And I actually think everyone should dress like that all the time. I like the aesthetics of a given adolescence. I love seeing groups of teens on the subway, and just seeing that they all happen to be wearing this kind of sneaker, I just like that kind of tribal code. It’s the coolest, and I think I’m always trying to shade my theater performances with that.

That’s great. I totally agree! I sometimes feel like — I mean, it’s a relief to not be a teenager, because it’s a lot of feelings, but—

Totally. I wouldn’t want to be back there, but I like remembering it or seeing it.

Exactly. There is a sort of unqualified intensity that is kind of amazing.

Yeah, totally. That’s a neat way of putting it.

Can you talk about what your experience was like growing up? What kind of relationship did you have to Judaism? 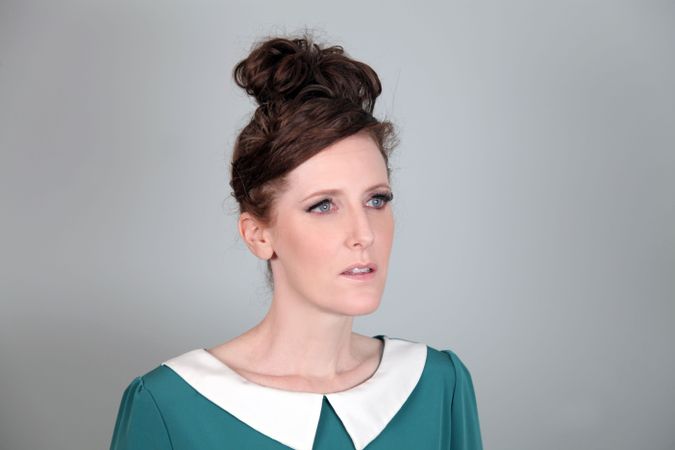 Tina Satter, creator of “Is This A Room.”

I grew up in a really small town in New Hampshire — I think I am third or fourth generation New Hampshire. There were two Jewish families in our town. Total. I mean, it was a super teeny town, it’s probably 5000 people, and very white and very WASP-y overall.

So dad is Jewish, and my mom is Catholic. They divorced when I was 12. My dad was raised very Jewish, and my mom was raised very Catholic — she went to Catholic school. But they came of age as adults in the 1960s; at the time they had us, there were no parts of either of those practices in our life. It’s not like there was backlash against the Catholicism or the Judaism, but they just didn’t. We went for social reasons to the Congregational Church. And my dad loved the Christmas carols.

And then, when I was in my early 20s, I saw my first Woody Allen movie — and I forget which one it was — it starts with a quote, a really dark, hilarious quote. And I was like, wait, that’s my dad’s whole philosophy.

And that was just the beginning of something that — I was like, oh my God, my dad is so Jewish. He’s so culturally Jewish, at least in a strain of the American cultural way. He’s hilarious. He’s argumentative. He’s pushy, but so great, and super smart.

And then the next point at which that really hits for me and my sister is when “Curb Your Enthusiasm” came out. We were literally like — all these little details in that show, this crumpling up of napkins, “you hoo”-ing people, arguing — we were like, “this is daddy.”

And weirdly, as an adult, I feel very Jewish in that sort of similar way to my dad. But I’ve never really practiced myself. And now I just have a lot of smart, interesting Jewish friends who are involved with queer temples and stuff here. And that’s been really interesting to occasionally go to Seders and stuff like that with them. But I’m sort of touristing.

I’m curious about your rehearsal process for “Is This A Room.” Did you feel at all inhibited coming into this situation where the text was already written and couldn’t be played around with or edited in any way?

I like constraints. And that was an incredible constraint. And it gave me and the actors — the work was very clear. Like, we have to solve this. I mean, Emily Davis, who plays Reality, said at one point that we treated it like a canonical text, like it was Shakespeare. And that is a very hard, but very exciting, creative task.

It was exciting to move away from my own words; it felt way less vulnerable. And then it was just so exciting, too, the challenge of, can this be theatrical text? I liked that challenge.

Do you have a favorite moment in the play?

It’s kind of a really dark one. When [the FBI agents] are like, “Are you sure you put this in the burn bin, are you sure you threw that paper away?” And she’s like, “Yes, I folded it in half.” And Agent Garrick’s like, “you folded it in half?” And on the page, it’s all these stutters. It blows my mind every time, how Emily does it. Like it literally gives me a feeling in my stomach. Will Cobbs, Pete Simpson, and Emily Davis in “Is This A Room.” By Chad Batka

Do you know of any updates to Reality’s case?

I know you’ve been in touch with her mother. “Reality Winner” is the most amazing name I’ve ever heard. I’m curious if you’ve ever asked her how they came up with that name.

Reality’s mama is named Billie Winner-Davis. Billie got to name their first child [Reality’s older sister, Brittany]. And Reality’s father, who’s passed away, got to name the second daughter. And as Billie tells that, he wanted a “real winner;” like, their last name was Winner, and he wanted a winner. And he chose “Reality Winner.”

Do you think at all in terms of the messaging of the play? Not even necessarily what you want it to say, but when you sit and watch it, is there a message that you yourself take away from it?

It’s such a personal experience to take in art, to take in theater. But my biggest message is just: this happened. This happened on June 3, 2017, in the United States, in a small room in a house. This was the first word said; this was the last word said.

When I say it like that, it sort of makes it seem like there’s all this big stuff on it. And there is — it literally transcends into geopolitics. But it’s also this amazing character study and afternoon in the life of a young millennial who served our country, taught yoga, owned guns, did a pretty stupid thing. So it just holds a lot.

I think Reality Winner is very inspiring, and amazing. And there’s a lot to say about all the things — from the Espionage Act, and should that still be here, to the punitive system — I mean, I could talk a lot about this. But to keep it sort of succinct, what I hope it is, it’s just: No, this is real.