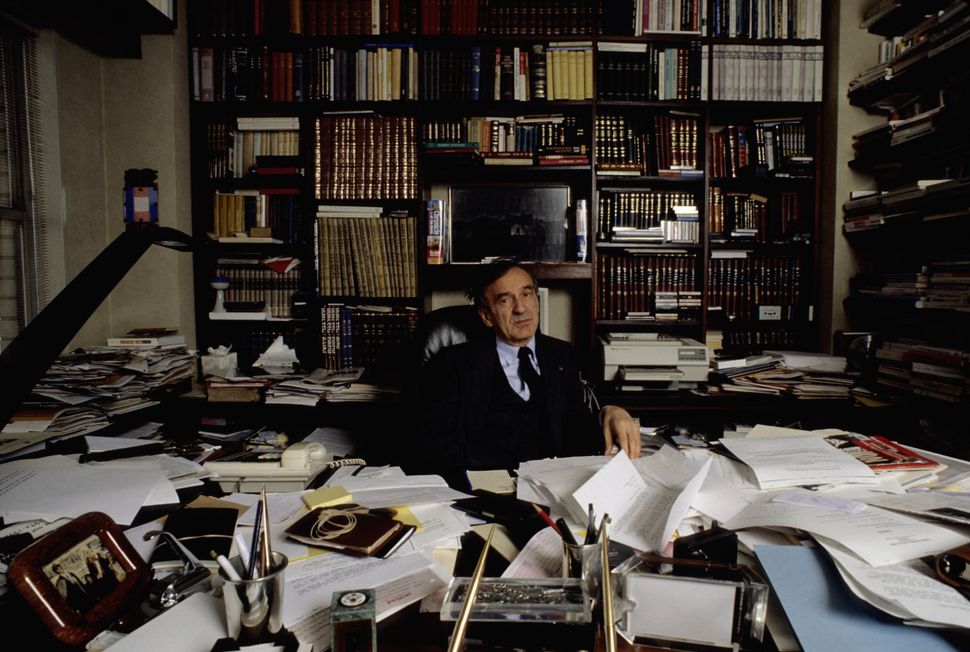 During Elie Wiesel’s lifetime, he wrote over 40 books, including seven collections of profiles of Jewish sages. “Filled With Fire and Light,” a posthumous eighth volume, was released this month. It is a treasury of previously unpublished lectures about the lives of biblical prophets, talmudists and leaders of the Hasidic world.

Though it may sound like an academic exercise that requires a great level of knowledge to make sense of it all, I was fascinated by these simply told tales of intelligence, perseverance and miracles. The first chapter, for example, is about the Prophet Elisha, whose life “inspired many commentaries and interpretations, both sacred and profane.”

At heart, Wiesel, who died in 2016 at the age of 78, was a scholar and teacher, but his writing is a conversation with the reader, not a lecture and it is leavened with a sense of humor. Who else would include a chapter on Satan that suggests the world is a better place because of him (or her).

What would “life and nature be without him,” Wiesel asks. “without the inner struggle or spiritual challenge he imposes.”

Wiesel seemed to be so pure of spirit, he could find something positive to say about the devil. While reading, I dug out my copy of “Souls on Fire,” the first of his sage books. I’d forgotten he’d inscribed it to me: “For Curt Schleier, Who knows the weight of memory.”

I was born in Switzerland during the war. My parents had snuck over the border from Vienna. My Uncle Joe never made it, though he survived the camps. My grandparents never made it out. No one talked about it; it just was. So I didn’t feel as though I’d been touched by the events — until I had grandchildren of my own and realized how much I’d missed.

But Wiesel knew. You could see it in his sad eyes. That’s the first thing I noticed when we met at his book-lined apartment on the Upper East Side of Manhattan. He insisted I had the wrong impression of him. “I like humor,” he said.

But I was not alone in finding Wiesel to be a somber, haunted individual. An editor once told me about the first time he’d seen Wiesel — or thought he did: “It looked like him. But then I thought it couldn’t be him. That man is smiling.”

“You can’t go through the horror of the Holocaust and not have it show,” the late John Silber, the onetime chancellor of Boston University, told me. “The remarkable thing is that his eyes are sad, and not angry.”

Wiesel’s story is familiar to many. He was 15 when he and his family were deported to Auschwitz, the last time he saw his mother and younger sister.

His survival was “a sheer accident,” he said. “If God was good enough to perform miracles for me, he could have performed miracles for many others, too, who were worthier than I, better than I, purer than I.”

Wiesel’s father died just three months before liberation, but he survived as did two older sisters. Adjusting to life afterward was easier than dealing with death, he noted. But the number on his wrist was a constant reminder, no matter how hard he tried to repress the pain.

Still, because he attributed his survival to a roll of the cosmic dice, he felt he needed to give his life some purpose. “I must do something with that,” he told me.

But not immediately. He waited 10 years before he started to write “Night,” his seminal memoir. A student of the Kabbalah, he knew words could open the gates to heaven — or hell.

“I know the dangers inherent in words,” he told me. “I wanted to be sure they would not affect other people in a way they shouldn’t.”

Published in 1958, “Night” was a memoir many didn’t — or didn’t want to — believe was true. For years Time magazine and others called it a novel.

I asked Wiesel if he had forgiven Germans.

“I don’t forgive. Who am I to forgive? No one authorized me to forgive,” he said. But almost as quickly that flash of emotion was gone. “But I do think that the young people today deserve something better, something more. Something other than my despair. What I am trying to say is do not pass judgment on an entire people. I do not believe in collective guilt.”

Wiesel saw light where others saw only darkness. Moreover, he sought out light and didn’t stop looking until he found it.

He was every bit as much a tzadik as those he profiled in his books. For the last year or so I’ve been annoying pretty much everyone I speak to, asking them to give me a single reason for hope. Between the pandemic, the political divide, global climate change and growing antisemitism, I feared for those grandchildren.

But reading about the sages and being reminded of Wiesel’s life, proved the righteous can still walk the earth today.

That gave me hope.