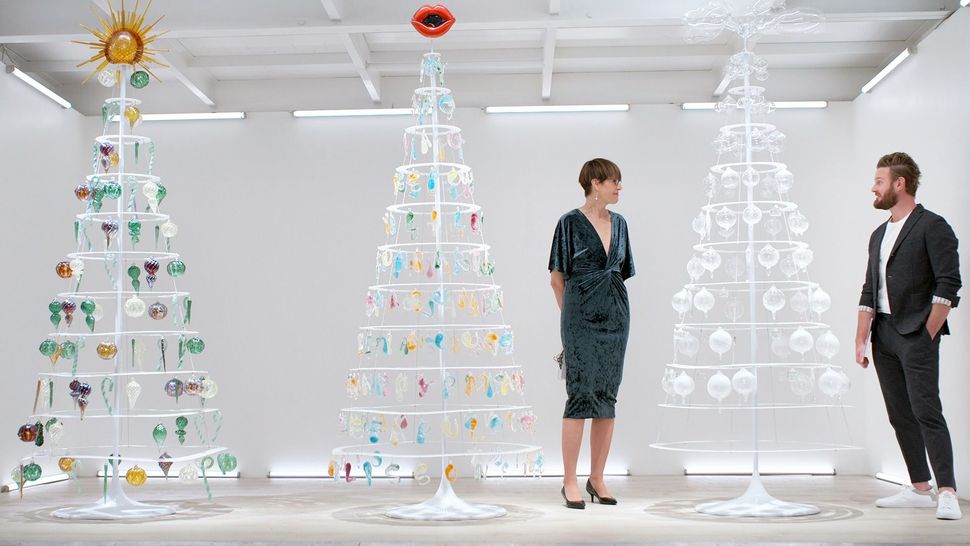 Katherine Gray and Bobby Berk with the Christmas tree challenge. Image by netflix

Christmas specials are part of the season on TV; tons of shows do special episodes or mini-seasons each year. Which makes sense — Christmas dominates the winter, and often causes family or relationship stress and drama; it would feel like a big omission to skip it.

Unless, that is, the majority of the people on your show don’t celebrate Christmas. Then maybe — probably — you should think about inclusion, perhaps go a little lighter on the red and the green and the trees and stockings, lay off the Christian hegemony a bit.

That’s the case with Netflix’s Christmas special mini-season of “Blown Away,” where three of the five all-star contestants, returning from the previous two seasons, don’t celebrate Christmas.

“Blown Away” is a glass-blowing show with cool art and nice competitors that gives a nice little serotonin boost, like “The Great British Bake Off” — except instead of nice little ovens, you have blasting furnaces, and instead of burning yourself on hot pans, you can burn yourself on molten glass. (Both shows feature blowtorches.)

Usually, each episode opens with the host enthusiastically exclaiming that each glass blower is provided with a “personal gloryhole,” which they will use to compete for the title of “Best in Blow.” (For the record, the term “gloryhole” originated in glass blowing — where it refers to an opening into a furnace — before it referred to a way to have anonymous sex.) 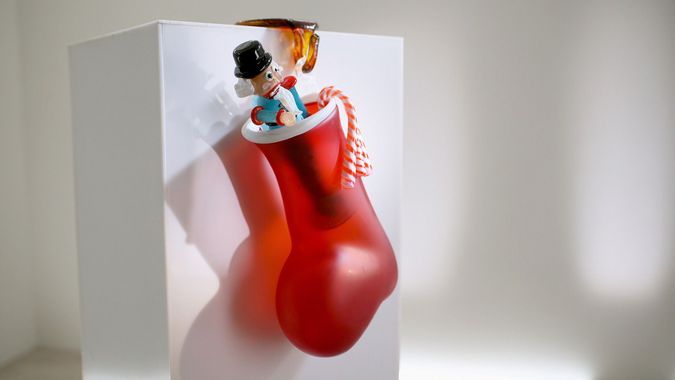 Cat Burns’s submission for the first challenge. Unlike most of the contestants, she has actual experience with Christmas. Image by netflix

But for the Christmas special, they’ve eliminated the iconic and perfect introduction and replaced it with a glass-themed rhyming voiceover featuring lines such as, “‘Twas a time close to Christmas, and through strands of twinkle lights / Furnaces were cranked up to 2,000 Fahrenheits.” As the camera pans through the hot-shop, we see its industrial floors and furnaces decked out with nutcrackers, stockings and rustic-looking signs declaring “Merry Christmas.”

Admittedly, Christmas is a big deal in the glass-blowing world, and, had the show focused on making pieces that were intended for commercial appeal or focused on historical techniques, it would still probably feel appropriate.

Instead, the challenges were often very personal, such as asking contestants to craft a piece evoking the best present they’d ever received — “We want to see something that really encapsulates a memory,” said host Katherine Gray.

How do you evoke a powerful memory of Christmas morning joy when you didn’t grow up with stockings or gifts? 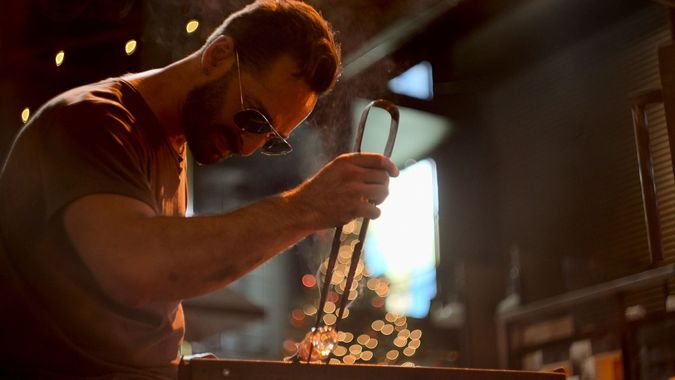 “I’m Jewish, so my family didn’t celebrate Christmas,” said Alexander Rosenberg — a.k.a. Hot Alexander, at least in my group chats — modeling a red and white reindeer print sweater provided by the show. Andi Kovel said the same. Nao Yamamoto, who grew up in Japan where Christmas, an import from the West, is largely celebrated as a romantic holiday for couples, wore a fuzzy pink sweater dotted with Santa heads and talked about how she felt left out on the holiday.

Of course, all three have had contact with Christmas — Yamamoto moved to the U.S. 11 years ago, and the other two grew up immersed in the Christian culture of this country — so they were able to come up with something on-theme. But it felt like they each had to stretch for ideas.

Generally I don’t love the “Happy Holidays” tactic of assuming that a watered-down Christmas is inclusive, when it’s clearly still centered on Christmas; just go full-out Santa and nativity scenes if that’s what you mean. We don’t need to force representation where it doesn’t belong. 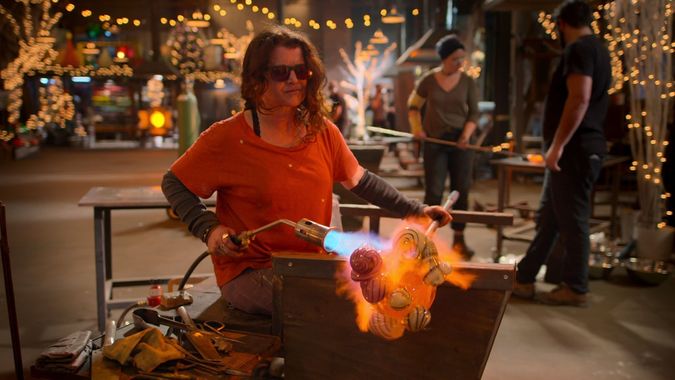 Andi fires up her interpretive Christmas confectionary. Image by netflix

But if you’re blithely asking contestants who don’t even celebrate the holiday to make art guided by their favorite Christmas memories, it’s time to dial down the Christmas focus.

To be fair, two of the challenges — to make a festive food in glass, and to create a winter wonderland — weren’t totally Christmas-specific, but they were still swathed in and judged by the language and aesthetics of Christmas; one host even complained that Yamamoto was using an Easter color palette instead of a Christmas one, in case there was any doubt about creative license to stray from the holiday. In a contest about making skilled art — a process which is often very personal — it felt like the non-Christian contestants were limited by the dominance of Christmas, a holiday they lacked personal connection to.

I still love the show — I watched all four episodes in one sitting. It’s just incredibly cool to watch the artists pull and stretch molten glass, as flames flare toward their faces, and the resulting pieces are mesmerizing and ethereal, even with the limits of the holiday. Imagine the incredible pieces that might’ve emerged from a competition where they could have used their actual experiences.