The vibrant, colorful world of Hanukkah stamps — and how they got to be that way 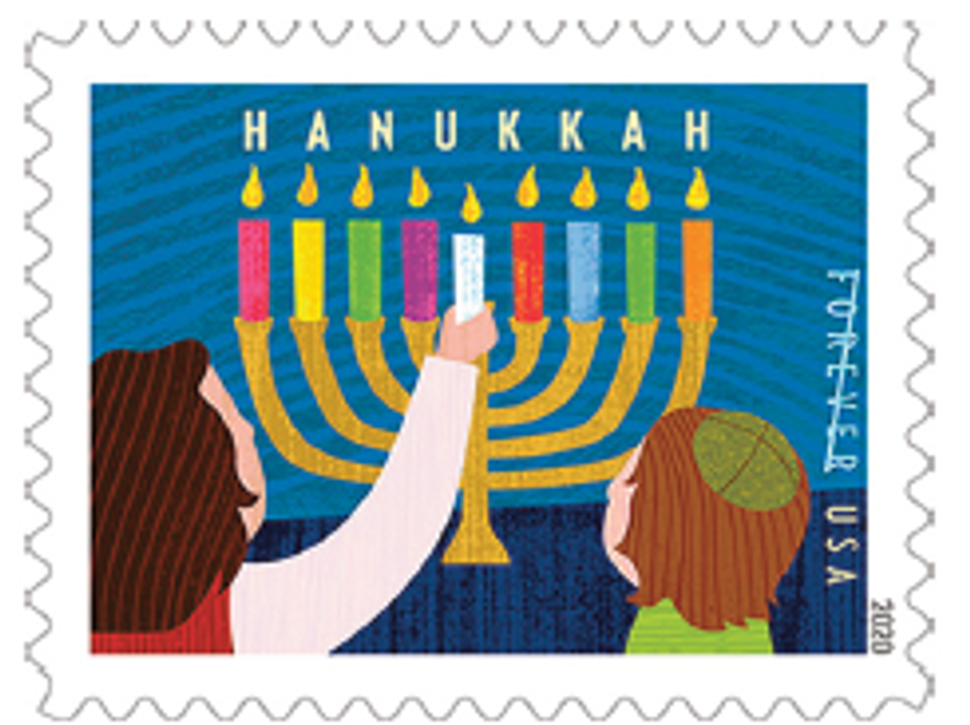 Hanukkah Stamp 2020: Artist Jing Jing Tsong depicts the lighting of the Hanukkiah on the last night of the holiday as seen through the eyes of children. By USPS

The festive season is upon us, and along with merriment comes the annual exchange of holiday greetings and gifts. Even though virtual cards are popular, many still prefer to send a more personal message through the mail, using Christmas stamps issued annually by postal administrations.

For Jews, the greeting card season had traditionally been consigned to the High Holidays, but in the last century, Hanukkah cards have gained popularity. While Israel has been celebrating the Festival of Lights on postage stamps since its inception in 1948, postal authorities in the United States and Canada have also embraced Hanukkah stamps. 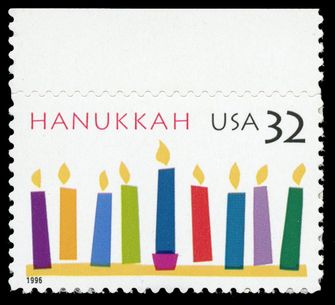 Starting a Tradition: Although Jewish personalities had been previously honored on postage, this commemorative was the first Jewish stamp issued by the USPS. Courtesy of Irv Osterer

In response to a vigorous letter writing campaign, the USPS issued its first Hanukkah stamp in 1996. This first simple, but visually powerful and dynamic color field composition created by American graphic designer Hannah Smotrich, featured a full complement of Hanukkah candles. Although Jewish personalities have been previously honored on postage, this commemorative was the first Jewish stamp issued by the USPS. An identical peel and stick version was simultaneously issued by Israel, making it the first philatelic joint venture of this kind with the United States. The USPS reissued this stamp in 33, 34 and 37 cent self-adhesive versions over eight years to reflect the rate increases of domestic postage. 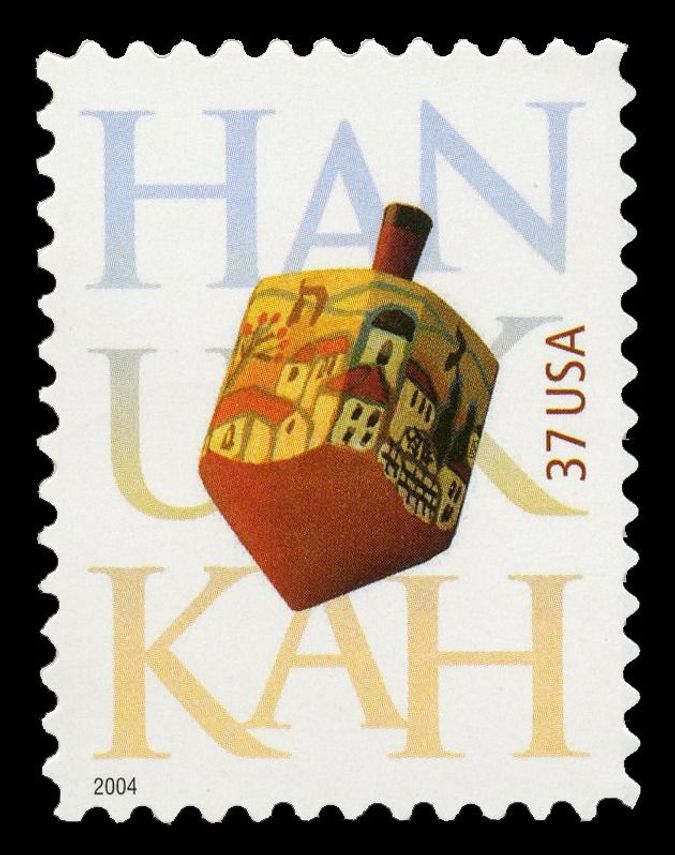 In 2004, this 37¢ effort featured creative typography by Greg Berger and an Elsie Moore photo of a vintage wooden dreidel from the collection of Rabbi Lennard and Dr. Linda Thal. This second Hanukkah stamp was printed in a smaller vertical format. The attractive self-adhesive was reissued over a five-year period in denominations of 37, 39, 41 and 42 cents reflecting the increase in domestic postal rates. 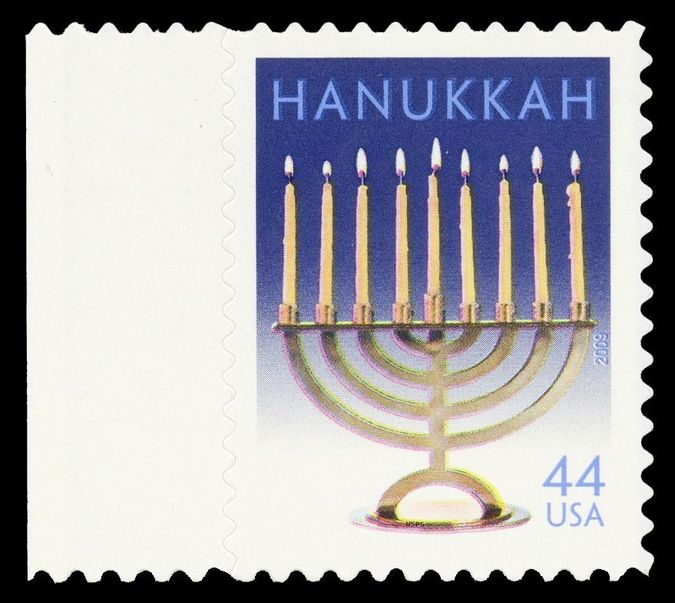 An Old Favorite: The 2009 U.S. stamp returned to the menorah for inspiration. Courtesy of Irv Osterer

The menorah theme enjoyed a reprise in 2009, albeit with a more realistic approach for a 44 cent stamp . It featured a photograph of a contemporary menorah commissioned by the USPS with nine lit candles. The hanukkiah was designed by Lisa Regan of the Garden Deva Sculpture Company in Tulsa, Oklahoma, and photographed by Ira Wexler. It would be the last Hanukkah stamp to have a fixed numerical denomination. 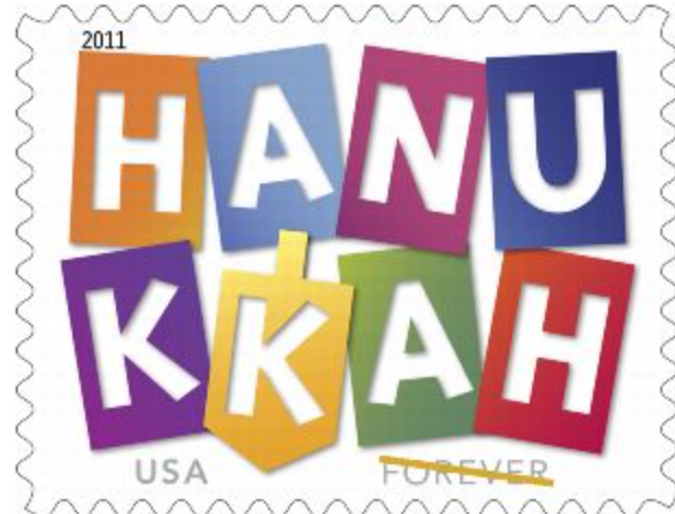 This commemorative stamp was created by illustrator Suzanne Kleinwaks. By USPS

The 2011 pressure-sensitive adhesive stamp is composed of colorful boxes. The second “K” in “Hanukkah” appears on a silhouette of a dreidel. This fourth Festival of Lights commemorative was created by Washington, D.C. illustrator Suzanne Kleinwaks. This and future Hanukkah issues were assigned the “Forever” designation — meaning that these stamps would always be valid for first-class mail in the United States. 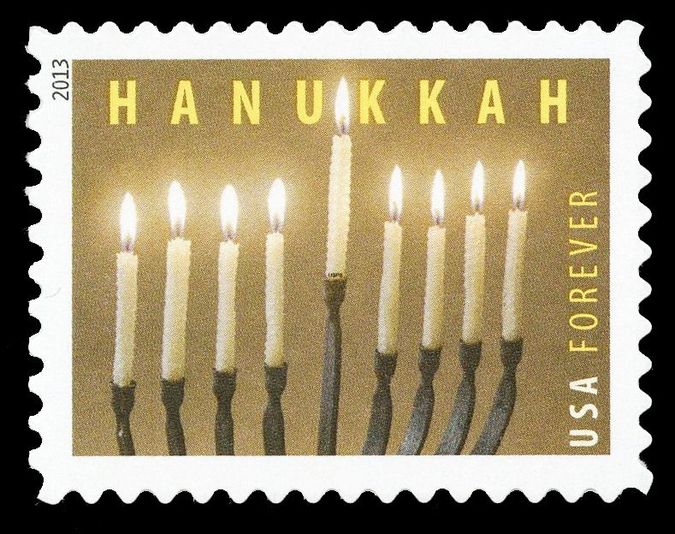 A Forever Stamp: The forged-iron Hanukkiah with burning beeswax candles depicted on this stamp was rendered by Vermont blacksmith Steven Bronstein. Courtesy of Irv Osterer

Creatively-cropped menorah images were next in this series. The striking 2013 color scheme features a forged-iron Hanukkiah with burning beeswax candles rendered by Vermont blacksmith Steven Bronstein and photographed by George E. Brown of Alexandria,Virginia 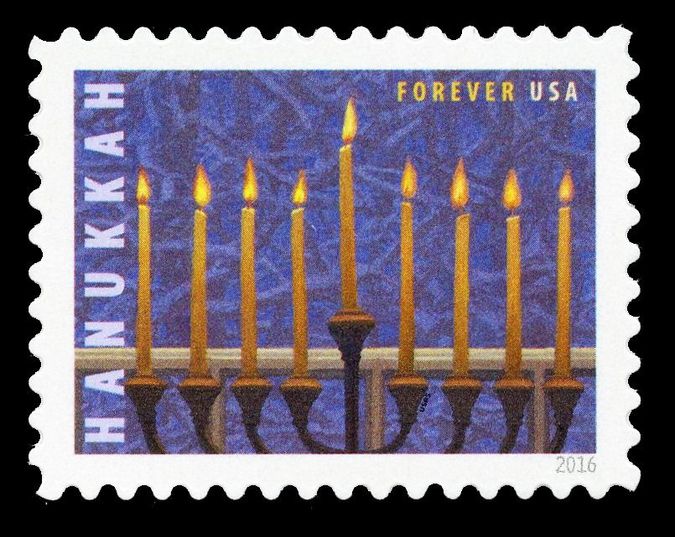 Designed by William Low: This 2016 Forever stamp depicted a menorah in the window of a home. The artist used complementary colors to highlight the contrast between the candles and the cool snow against a horizontal window frame. Courtesy of Irv Osterer

The 2016 issue featured a menorah illustration by William Low in the window of a home. The artist used complementary colors to highlight the contrast between the candles and the cool snow against a horizontal window frame. 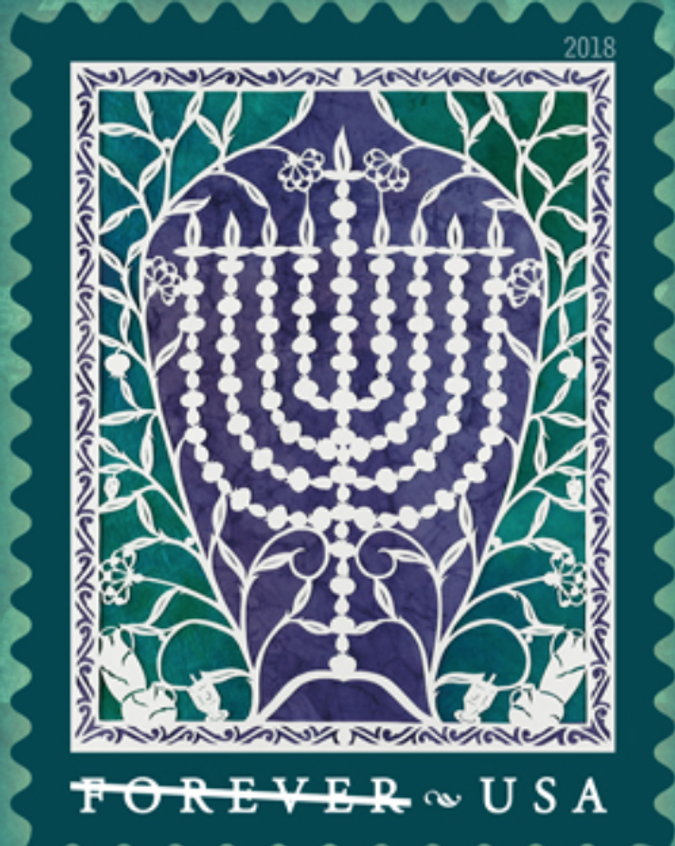 Joint Issue With Israel: The purple background behind the menorah depicted here alludes to the beaker of oil that sustained the eternal light in the Temple for eight days. By USPS

Tamar Fishman explored the traditional Jewish folk art of paper cutting in a 2018 joint issue with Israel. The background purple pattern alludes to the beaker of oil that sustained the eternal light in the Temple for eight days.The foliage, flowers and fruit are from the pomegranate, a motif that features prominently in many Jewish archeological sites. The bottom left and right feature small broken oil vessels and dreidels. These same motifs are more realistically depicted in the “shuval” or tab area that is standard on the bottom row of all sheets of Israeli stamps. 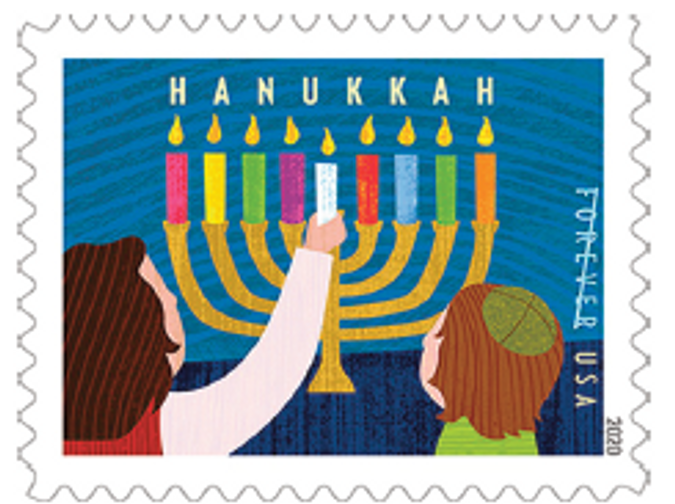 Hanukkah Stamp 2020: Artist Jing Jing Tsong depicts the lighting of the Hanukkiah on the last night of the holiday as seen through the eyes of children. By USPS

2020 marked a departure to a more illustrative and figurative approach by artist Jing Jing Tsong, depicting the lighting of the Hanukkiah on the last night of the holiday as seen through the eyes of children. This will also be the stamp available at USPS postal outlets throughout this season.

The 2004, 2011, 2013, 2016, 2018 and 2020 Hanukkah stamps were designed under the art direction of Ethel Kessler who has served as art director for the USPS’ stamps since 1998. Kessler’s breast cancer stamp raised over $71 million for breast cancer research, and she has since art directed over 250 stamps for the Postal Service. When it comes to holiday stamps, Canada has been something of a trendsetter. A late-19th century engraved horizontal stamp featuring a multicolored map of the British Empire and a “Xmas 1898” message is considered by philatelists to be first Christmas postage stamp. Canada Post began its official Christmas stamp program in 1964, but it was not until much later that it began to consider celebratory stamps for other faiths.

The issuing of regular postage stamps was the logical continuation of this program, and was part of a Canada Post initiative to recognize holidays reflecting Canada’s highly multicultural diversity as the country celebrated its sesquicentennial. 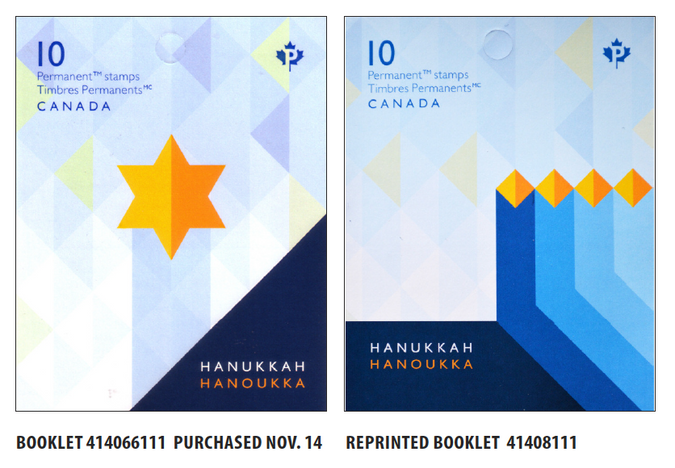 Canada’s first official Hanukkah stamp in 2017 featured a symmetrical stylized art deco monochromatic blue menorah with yellow/gold diamond shaped notes simulating the flame for each candle — and a yellow-gold Star of David perched higher as the Shamash or lead candle.

The designers at Entro Communications made an honest, but unfortunate decision to highlight the yellow-gold magen david as a large graphic element on the booklet cover, which met with disapproval from the Jewish community. The booklets were immediately recalled and reissued with a change of the front cover design, but not before many were sold at postal outlets. The stamp design itself remained unchanged.

Unlike the USPS, Canada Post issues “Official First Day Covers” for each stamp. Although the OFDCs were quickly recalled, some from the first printing were delivered to philatelic subscribers. The yellow star error is extremely rare and has sold online for as much as $450 making it Canada’s rarest contemporary first-day cover

For Canada’s 2019 and 2020 and Hanukkah issues, Ottawa’s Rabbi Rueben Bulka (z’’l) was invited by Canada Post to join the selection team and to give his approval to the final artwork. The rabbi is thanked for his contribution to the process on the back of the booklets and FDCs. 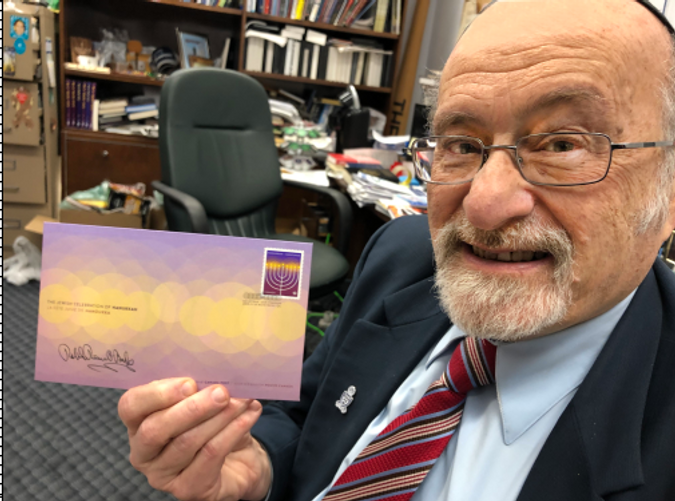 Bulka who was known affectionately as Canada’s Rabbi sadly died this year. His memory will live on in this year’s Hanukkah stamp to which he gave his approval. The attractive multicolored stamp, issued Nov. 8, 2021, several weeks in advance of the Chag, once again features a symmetrical vector illustration of a menorah and was created by Joseph Gault and his partner, Israeli-Canadian designer Avi Dunkelman. 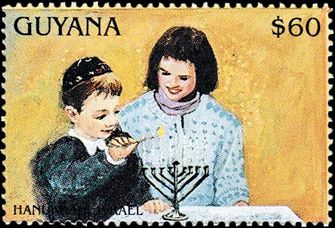 The Marshall Islands, Grenadines, Guyana and Netherland Antilles have marginal Jewish populations. Their Hanukkah stamps were targeted exclusively for the collector market. Sometimes, a menorah appears on Judaica-themed stamps as a purely decorative element.

Meanwhile, Hungary, Italy and Serbia have all used Hanukkah postmarks.

If you’re interested in ordering Hanukkah stamps, you can get them from the U.S. Postal Service or from Canada Post.

Irv Osterer is a member of the Society of Israel Philatelists and the 2020 recipient of their Reggel Memorial Award for Outstanding Service and Contribution to Holy Land and Israel Philately. He also is affiliated with the Judaica Thematic Society and the Association of Registered Graphic Designers of Canada.He is indebted to philatelists Gregg Philipson, Ellis Bromberg, Gary Goodman, Joy Parks and David Giles for their help with this article.

The vibrant, colorful world of Hanukkah stamps — and how they got to be that way