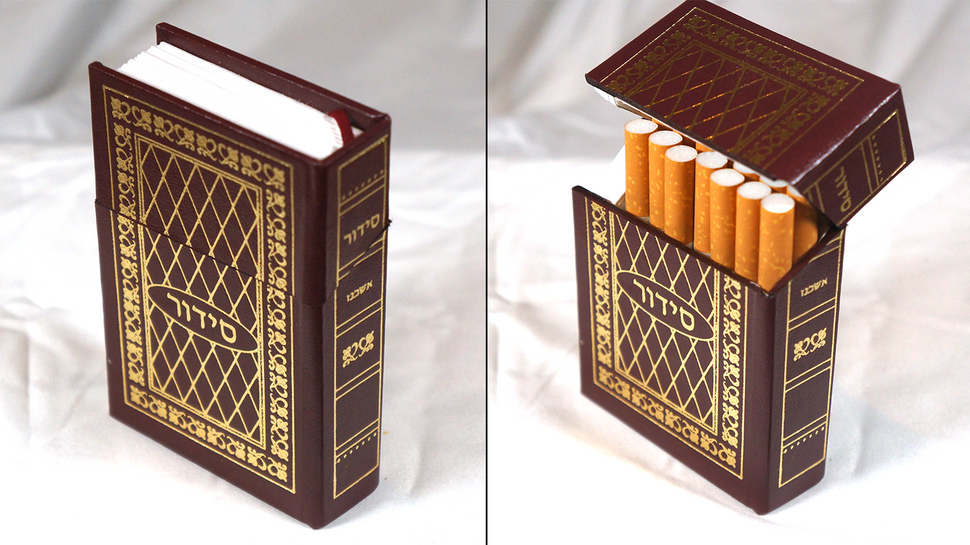 Closed and Open: A seemingly ordinary Jewish prayer book, but open it up and it becomes something entirely different. By David Zvi Kalman

Before you is a cigarette box designed to look like a small prayer book. The idea for this object had been rattling around in my head since 2015. Realizing that I did not have the technical skills to make it myself, I contacted Rachel Jackson, a scribe and bookbinder, and during the summer of 2017 we began working on the object’s design. Rachel finished creating the objects—she made five of them—just a month before the pandemic, and then she shipped them off to me. (I have never smoked a cigarette in my life; these were purchased for the occasion.).

That, so far, is the full history of the object. For the entire pandemic a cigarette siddur has been sitting on my desk, staring at me and doing exactly nothing, as I contemplated why in the world I had spent so much time creating an object that I didn’t know what to do with.

After years of stewing in these questions, I realized that I needed to do something inadvisable: I had to show the work and explain its meaning at the same time.

So let’s start again. This is a Jewish art object, and Jews — famously — are not known for their art. No, that doesn’t mean that Jews are entirely or purposefully lacking in art; that claim, which Christians so frequently leveled against Jews, was properly put to bed by Kalman Bland and others. Still, the mass of Jewish creative energy has been poured not into pictures or sculptures, but into texts, which the rabbis worked and re-worked in much the same way that a blacksmith manipulates iron. Text manipulation in Judaism is a high art, as sculpture is in Christianity. Visual arts are there, too, but they often live in the shadow of text, serving as elucidations or adornments.

Ironically, this state of affairs has remained despite the fact that the idea of Jewish art seems to have caught the public’s imagination. “Shtisel,” an Israeli show that gained a huge American audience through Netflix, centers on a haredi man whose desire to paint sets him apart from his community. “Unorthodox,” a Netflix miniseries based on a book by the same name, treats the ex-haredi protagonist’s musical abilities as the ultimate expression of her formerly suppressed self. When The Atlantic recently highlighted a group of haredi artists in Williamsburg, it focused on how the work very existence broke communal boundaries, rather than how it fit into modes of Jewish creative expression.

This surface-level appreciation shortchanges what this artwork can actually do. In the same way that rabbinic narrative (aggadah) has the power to subvert and enliven the neat worlds that rabbinic law (halakhah) creates, images can and should put forward ideas that texts cannot easily express. This kind of interplay was hard to pull off at a time when even reproducing simple diagrams in the pages of the Talmud could not be done reliably, but there are no longer technical obstacles to execution. Today, it is possible to create Jewish books — seforim — which speak two languages at the same time.

The interplay of text and graphics has been used to great effect in the last 20 years to enliven the core texts. There are now illustrated Bibles, illustrated rabbinic law books, and illustrated prayerbooks; one artist has even illustrated the entire Talmud. I see this new generation of illustrated books as the beginning of a grand and massive translation project: now that all core texts have full modern commentaries and an English translation—increasingly freely accessible, thanks to Sefaria — the next step is to put images to it all. This graphical layer has the potential for great longevity, since it does not require knowledge of any particular language.

But just as not all commentaries are created the same, not all illuminations serve the same purpose. On one side of the spectrum are the purely explanatory illustrations, designed as an aid to complex technical descriptions about, say, the legal status of a particular courtyard. Next to these are what could be called “illustrations of enticement,” which are designed to make texts appealing, bringing them to life for children and adults and in the process putting their own spins on the stories.

Some of the entries in this second category are perfunctory and unremarkable, but at their best illustrations of this type can radically alter the way we read the underlying texts. J.T. Waldman’s “Megillat Esther” takes one of the Bible’s most compelling narratives and makes it, somehow, deeper. Arthur Szyk’s illuminated Haggadah brings rich artwork into conversation with 1930s Europe. Rachel Hsu’s Illustrated Book of Ruth, which my publishing house will be releasing next year, visually centers the story’s women and relegates the men to the margins, an eminently reasonable interpretation of the only book of the Bible that passes the Bechdel test. In a world where some Jewish publications do not depict women at all, I think these efforts matter.

But what’s the next step? What might it mean to have a book whose text and images are actually opposed to one another, taking our longstanding tradition of holy disagreement into a wholly new dimension? When I designed Seder Oneg Shabbos, I intentionally chose illustrations that would serve to challenge the standard interpretation of the texts. 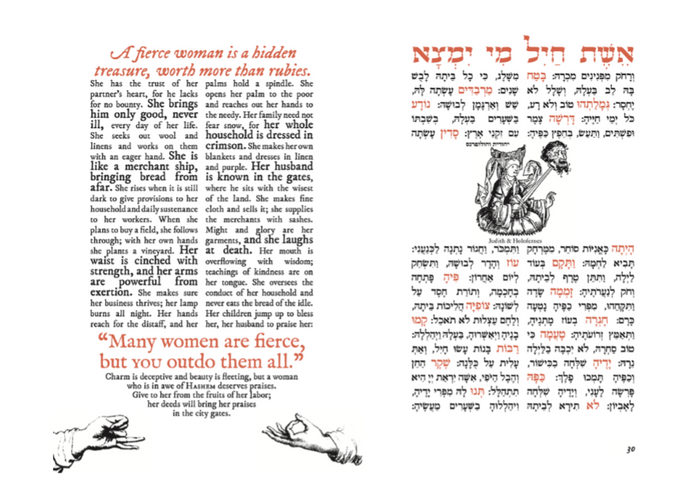 Image Vs. Text: When the author designed Seder Oneg Shabbos, he intentionally chose illustrations that would serve to challenge the standard interpretation of the texts. The page that contains “Eshet Chayil,” a biblical passage which describes the ideal woman as a constant and tireless domestic worker, also contains an illustration of Judith holding Holofernes’ severed head. Courtesy of David Zvi Kalman

The page that contains “Eshet Chayil,” a biblical passage which describes the ideal woman as a constant and tireless domestic worker, also contains an illustration of Judith holding Holofernes’ severed head. A later spread contains a huge illustration of giant rabbits hunting down humans, a reversal of the hare hunt that is a feature of a great many Ashkenazi haggadahs. The power of images is such that it is now possible to make Jewish books—even ritual books—that are simultaneously fully traditional and deeply subversive.

This development path that I am proposing matters. Jewish art is, after all, already a thing. There are entire museums dedicated to it. But Jewish art, especially in America, tends to emerge out of contemporary culture and not the history of ideas; it’s about the foods we eat and the way we talk and the anxieties we share, but not about the traditions we transmit or the observances we take part in or the texts we learn. My experience is that Jewish art that does comes out of the history of ideas, by virtue of being “too Jewish,” is a hard sell (literally and figuratively) for the art world.

There are a few exceptions — the recent work of the Jewish Studio Project and Atiq are important here — but the rule still holds. The result is that unless Jewish art objects are the sort that can be sold as “Judaica,” they are effectively homeless, able to reside neither in the art world nor in the text-dominated universe of Jewish ideas. As a creator of these objects, this liminality is both exciting and dispiriting. It’s fun to make something that breaks the mold, but not if it sits on your desk forever.

But now, finally, we can get to it: the cigarette siddur. Why does this object exist? 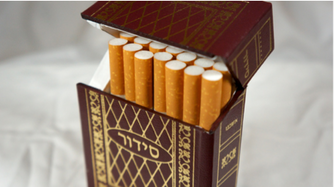 Jewish prayer is a ritual act, and anyone who has participated in those rituals knows that they can sometimes feel hollow even under ideal conditions. This is par for the course. Every long-term commitment has moments of empty, mechanical obedience; the Kotzker Rebbe once said that prayer should lie like a stone atop your heart so that, in that rare hour when the heart opens, it can slip inside. Sometimes, however, the acceptance of hollow practice turns into something else: a desire to continue a behavior not because it is meaningful, but because stopping is too frightening to contemplate. In these moments, ritual passes over into something less pleasant: obligation for the sake of obligation, continuing for the sake of not stopping. It is not too much to call this state of obligation by another term: addiction. Now we’ve arrived.

It feels silly to spend all these words explaining why words are unnecessary, and a heavy-handed explanation of intent can tamp down a work’s interpretative potential. Other interpretations are certainly possible; some Israelis, for example, have seen in this prayerbook a symbolic representation of those who are outwardly pious but internally profane — there’s actually a whole TV show about such people. In order to take hold and become permanent fixtures of the Jewish intellectual tradition, art objects can’t become permanent cultural fixtures unless they leave space not just for criticism, but for interpretation, appropriation, mimicry, and development. They must become — and the word itself is so revealing — a text.

Still, given the personal consequences of misinterpretation, I didn’t feel that I could put this art into the world without some explanation. Subversive artwork, like subversive comedy, is a high wire act where the consequence of bad execution and poor communication is that people get deeply (and justifiably!) offended. In writing this I’m trying to boost my chances of avoiding that fate. So here it is: an art object, a text-as-object. I pose to you: where does it belong?

David Zvi Kalman is a Scholar in Residence at the Shalom Hartman Institute of North America and the owner of Print-O-Craft Press. His work can be found at www.davidzvi.com.