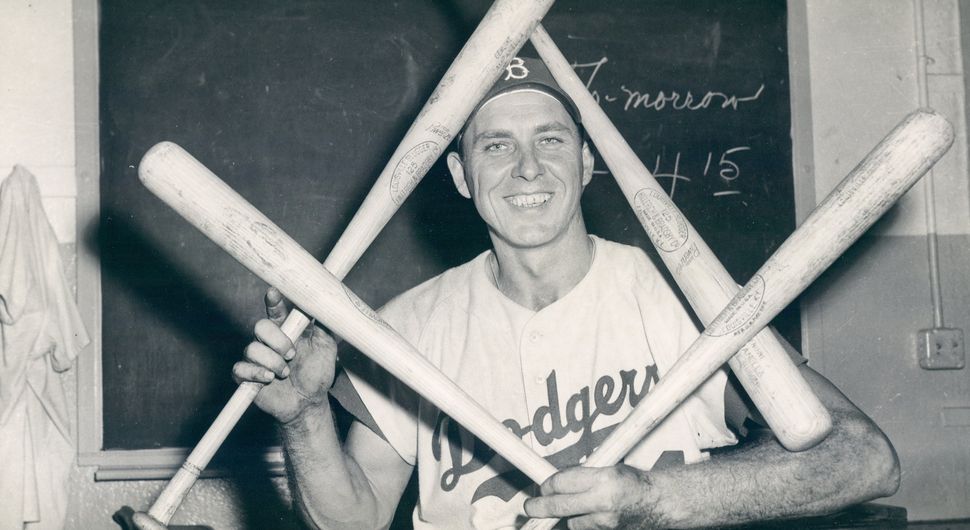 The news that Gil Hodges, former Brooklyn Dodgers first baseman and New York Mets manager, has been elected to the National Baseball Hall of Fame in Cooperstown, New York, should make the Jews already present in that hallowed spot kvell. Including the late Marvin Miller, the longtime player’s union executive who was belatedly inducted into the Hall this year on the second day of Rosh Hashanah.

In addition to being a stellar player and mentor who made the Mets’ 1969 championship possible, Hodges was also a sincere friend of the Jews.

In the year that the Mets won the World Series, the Jewish player Art Shamsky debated whether to play in a double-header on Yom Kippur, games which might have decided the National League Eastern Division championship.

Shamsky asked for guidance from manager Hodges, who suggested that he follow his conscience. Shamsky abstained from playing, and the Mets won anyway.

Yet Hodges’ involvement with Judaism went beyond respecting the High Holy Days. Discovered and signed to a baseball contract by the Jewish scout and coach Jake Pitler, Hodges was a devout Catholic.

Yet he treasured a Chai medallion sent to him by a Jewish soldier serving in the Korean War, after the lifelong chain smoker Hodges had suffered a heart attack in 1968. Other Jewish fans had mailed him mezuzas.

Hodges’s longtime friend, the Brooklyn attorney and sports maven Sid Loberfeld recalled that circa 1970, a Met ballplayer was scheduled to appear at a temple in Brooklyn for a fee, but canceled at the last minute. The organizers “went to Gil’s house on Bedford Avenue, told him of the situation, and that night Gil showed up with his wife, Joan. He refused to accept the fee, and insisted that the money go to charity. This was the kind of man Gil was.”

In September 1984, The Indianapolis Jewish Post reported that, after a 1968 arson attack on the Yeshiva of Eastern Parkway, Hodges participated in a fundraising drive to help the school. In return, Rav Meilech Silber, the rosh yeshiva, presented Hodges and the Mets with a Pesach Seder plate after saying a private prayer before a night game.

Hodges was intrigued by the prayer and the Hebrew text on the plate. The rabbi explained that in this case, the question “Why is this night different from all other nights?” might allude to the Mets possibly winning, after several years of paltry results.

The Mets did triumph that evening, and Hodges may have superstitiously thought the victory had something to do with Rav Silber’s prayer, for he phoned the rabbi repeatedly to invite him to more Met games and even invited him to accompany the team on an upcoming road trip “as a kind of chaplain.”

The rabbi declined, but was reinvited persistently by Hodges to join subsequent road trips and home games. The concept of a Jewish chaplain as good luck charm may have originated during Hodges’ military service in World War II, about which he divulged so little that implausible legends arose.

However, biographer Mort Zachter debunked this tale, noting that in 1943 at age 19, less than two weeks after making his major league debut with the Dodgers, Hodges enlisted in the Marine Corps. He would participate in the Battle of Okinawa in April 1945 and win a Bronze Star for heroism under fire.

But Hodges was never involved in hand-to-hand combat, since he served in the 16th Anti-Aircraft Artillery (AAA) battalion. He found solace in going to Mass and Communion served by Catholic clergy and may possibly have encountered Jewish chaplains as well.

In any case, Jewish fans of Hodges as a player for the postwar Dodgers were reassured by his strong silent presence. He was born in Indiana to a mining family. His father was mutilated in a work accident, as a September 1951 “Saturday Evening Post” profile by sports writer Harold Rosenthal explained.

This stoic family acceptance of suffering was combined with physical strength and hands so large that a baseball glove seemed almost superfluous. And this powerful icon was a constant presence in Brooklyn, living near Jewish fans on Bedford Avenue near Avenue M in Flatbush.

Small wonder that a postwar admirer like Leslie Schwartz, a Hungarian Jewish survivor of Auschwitz and Dachau concentration camps, specifies in a memoir his admiration for Hodges and his teammates. After the Dodgers abandoned Brooklyn for Los Angeles, rather than root for the Yankees, Schwartz became a Boston Red Sox fan.

Other Jewish acolytes remained hypnotized by Hodges and his team. Roger Kahn, author of “The Boys of Summer” (1972) a highly personalized view of the Dodgers, was a graduate of Erasmus Hall High School in Brooklyn.

Although most eyewitnesses have credited Hodges with courageously assisting his teammate Jackie Robinson’s painful struggle to integrate a racist sport starting in 1947, Kahn quoted Robinson as comparing Hodges to Stan Musial in standoffish inactivity, rather than benevolent intervention: “[Musial] was like Gil Hodges. A nice guy, but when it came to what I had to do, neither one hurt me and neither one helped.”

This goes against the recollection of many, and indeed Robinson’s own distraught reaction upon hearing the news of Hodges’ sudden death. Yet where Jews may have found Hodges most exemplary was in his conventional, old-fashioned courtliness, the type of virtue deemed “square” in the ‘60s heyday of the New York Mets.

In May 1968, New York Magazine described how Hodges’ square personality suited baseball, itself a square game appropriate for “old Jewish men who stand on Flatbush Avenue outside Garfield’s Cafeteria.”

Yet Hodges’ gentle paternal persona was ideal for nurturing the long-bruised Mets. Not every player adored Hodges during his long career. In 1969, Ken “Hawk” Harrelson noisily slated Hodges who was managing the Washington Senators before his stint with the Mets, as “unfair, unreasonable, unfeeling, incapable of handling men, stubborn, holier-than-thou and ice cold.”

Hodges had rejected Hawk’s suggestion that he could wake the team out of its doldrums by starting a brawl during a game. Hodges loftily replied: “This shows me something about what kind of person you are.”

But Jewish devotees knew very well the sort of person Hodges was. In Gary David Goldberg’s fictionalized TV sitcom “Brooklyn Bridge,” Jules Berger, a Jewish grandfather, fibs to his grandson that he had played baseball against Hodges in Russia. In one 1991 episode, when zaydeh takes the boy to an autograph signing to meet Hodges, rather than denying the story and diminishing the old Jewish man in the eyes of the lad, Hodges states: “Good to see you again.” Berger retorts: “You should know what a mensch is, because that’s you.”

Another old Brooklyn friend, David Kaminer, likewise diagnosed Hodges as a mensch because he made “everybody feel better about themselves.” Welcome to the Hall of Fame, mensch!