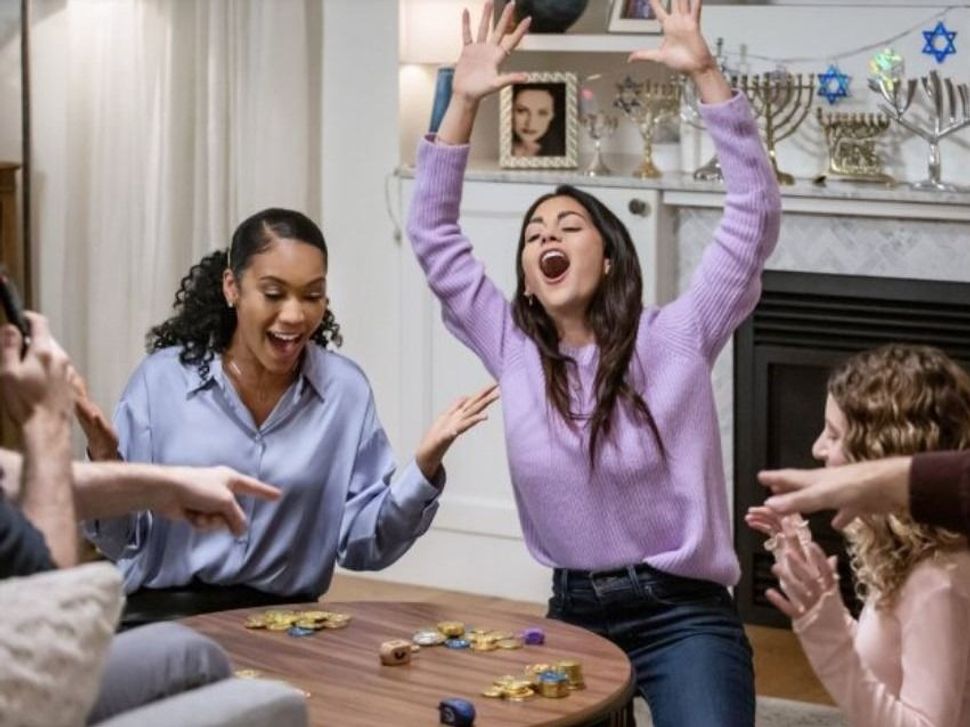 Sara (Inbar Lavi) celebrates a winning spin of her dreidel as co-worker and friend Keisha (Natalie Malaika), left, and niece Zoey (Alice Rose) look on in a scene from the Hallmark Channel’s “Eight Gifts of Hanukkah.” Courtesy of Hallmark Channel

I have a confession to make: I just enjoyed a Hallmark Channel Christmas movie.

Or, all right; I’ll qualify that: It was “Eight Gifts of Hanukkah” — the one outlier in Hallmark’s “Countdown to Christmas” series (re-airing Dec. 12, 10 a.m. Eastern). And one reason I liked it is I view the channel in a whole different light ever since learning there’s a secret Hallmark plot decoder.

The channel’s target demographic is women 18+ and they totally own the segment, citing November Nielsen figures showing it as the “#1 most-watched entertainment cable network” for all audiences and in particular women 18-49 and 25-54. I’m not even sure my cohort of 60-something, straight, married, Black Jewish males is on their radar screen. Or any programmer’s, for that matter.

Until two years ago, the channel thoroughly baffled me, coming off as the epitome of predictable cheap sentiment. But an article in The New Yorker told exactly how to predict their story arcs, and suddenly, the movies made sense. White women in the suburbs weren’t looking for irony or plot twists, but the comfort food of stories about women just like them, or how they fantasized themselves to be: A thirty-something on the verge of a major career success, recently liberated from a going-nowhere relationship, and returning to her small-town roots to find the unlikely perfect guy she knew all her life but somehow overlooked romantically.

The hint that he might be the one comes with the “almost kiss,” and the rest of the movie builds up to the real one.

That totally changed my view, and that of my wife (who’s not completely in the target demographic, either). We now take bets on when the almost-kiss will happen.

Equally popular as the plot formula is Christmas, both as a backdrop and starring character, and the network owns that genre as well, with several seasons of weeks-long Christmas series. That’s sparked criticism, including in the Forward, with reminders that not everyone in TV land celebrates Christmas, and those who do aren’t all suburban white women. In response, the channel has cast Black and other people of color in leading roles, and, since 2019, programmed a Hanukkah offering.

So this one? Optometrist Sara (Israeli actress Inbar Lavi) is coming off a poor relationship (check!) but lives in Seattle (formula deviation), where the action is centered. She’s recently resumed dating and must figure out which of her suitors is behind a string of secret, and touching, Hanukkah gifts that have won her heart.

The almost-kiss is there, but this time I used my scorecard to evaluate Jewish references. Sara is immediately turned off by a blind date showing up as Santa Claus (score reality point). But she doesn’t ask a non-Jewish Michelin-rated chef who steps in to emergency cater the JCC Hanukkah party she’s chairing if he has access to a kosher kitchen. Worse, another committee member describes the event’s “Hanukkah hunt” as “sort of an Easter Egg hunt, only with gelt.”

“No Jew would ever say that!” I yelled at the screen.

Except three days later, a Jew in my real life did — describing an upcoming Jewish office party activity as “kind of like a Secret Santa.” (“Mystery Maccabee” was suggested as an alternative).

In fact, scenes that at first seemed unlikely were quickly justified, such as the way-too-many menorahs adorning Sara’s mantle. Turns out she inherited them from her beloved bubbe, who couldn’t stop collecting them. Who doesn’t know a bubbe like that?

In another nod to verisimilitude, the youngsters showing up to the Hanukkah hunt include several of color. Sure, multicultural extras are clearly engraved in the Hallmark production book, but they aren’t so visible in “regular” Jewish movies. Give the producers credit for depicting in fantasy what the actual Jewish world looks like.

Though in Seattle, we’re spared the fake snow, Sara is surrounded by a forest of Christmas trees whenever she ventures out. It’s requisite Hallmark, of course, but perhaps a subtle commentary as well: As Jewish as Sara’s home and life are, she must navigate the world as an other.

Am I reading too much into this? Probably. But you can’t make a Jewish movie and ask viewers to totally turn off their brains. Isn’t the religion all about questioning?

There’s another reason for my new Hallmark Channel soft spot: I recently learned — full disclosure — that a top executive is an old high school classmate, one of 386 female students who integrated a technical school of 5,000 boys. With its emphasis on science and math and deductive reasoning, I like to think she’s the one who figured out the formula for reaching members of overlooked demographics.