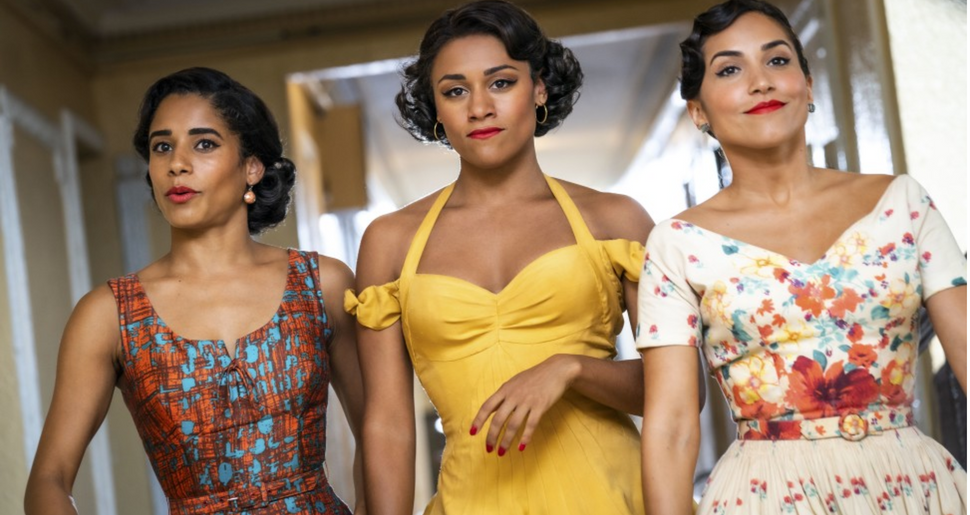 The cast of ‘West Side Story’ By 20th Century Studios

Recently I went to a Seattle cineplex to see the new “West Side Story” film. But my dance with the show didn’t start there. It all began in 1959.

I was an artsy nine-year old girl living in suburban Detroit, and one of my favorite things was my modern dance class. It met every Saturday morning at the gym of my elementary school, and was taught by Harriet Berg, the hippest, most influential choreographer and dance educator in town, recruited by my mother and other mothers to bring the joy of movement to us suburban squirts, and so she did.

She also knew many of the leading lights on the New York dance scene. And when the hit musical “West Side Story” came to Detroit on tour, with dance at its center in a whole new way, Harriet encouraged her students — at Wayne State University, and at my Burton Elementary School — to go see it.

I was ready. Like many children with Jewish parents of Ashkenazic stock, I was exposed (probably in the crib) to cast albums of Broadway musicals, and later to local productions and movies of Rodgers and Hammerstein classics. And somehow, thanks to Harriet, my folks let me attend a show about love and death, gang warfare and bigotry, when I was too young to understand the serious themes but old enough to excite in the music, the explosive dancing, the swagger and romance of this “Romeo and Juliet” in the New York slums.

Soon we had a cast album of “West Side Story” at home, and I knew most of the songs by heart. Alongside my cousin Rochelle I was belting out “The Jet Song” and acting out bits of the show.

My ecstatic youthful embrace of this (among other Broadway musicals that provided the compound intoxication of story, song and dance) would be one of the early sparks that ignited a career I could not have imagined in my childhood — nor some of my adulthood. Who could imagine, really, wanting to be a theater critic when you grew up?

But that’s how I would end up, and I can blame it in part on “West Side Story,” which has wended through my life in significant ways.

In 1961, the first movie version came out, and that made a huge impression on my young psyche too. I was engrossed from the opening credits by the great Saul Bass, which suffused the big screen with saturated blocks of Technicolor hues that gradually revealed a bird’s eye view of the concrete topography Manhattan shot from a helicopter. It was a revelation. Along with other arresting images — the swishing of flouncy red and purple skirts in the dance at the gym scene, the finger snapping of toughs on a playground, two earnest young lovers crooning about “suns and moons all over the place” while perched on a fire escape — “West Side Story” unspooled into my consciousness, as Orson Welles once described the power of cinema, like “a ribbon of dream.”

But it was many years before I knew, for instance, that the musical was created by four Jewish artists — composer Leonard Bernstein, lyricist Stephen Sondheim, writer Arthur Laurents and choreographer-director Jerome Robbins — at the top of their game. That it was far closer to Shakespeare’s “Romeo and Juliet” than most people knew. That it was filmed partly in the rubble of tenements destroyed to make room for, ironically, the Lincoln Center culture complex. And that it was controversial, from its first finger snap to its mournful finale — for confronting prejudice, injustice, poverty and rape in song and dance, for killing off its young male leads, for fusing music, movement and story in (for Broadway) radical new ways and for trafficking in what some Latinx critics considered false stereotypes of Puerto Ricans.

Truth be told, the glory of “West Side Story” began to fade several decades ago, as other Broadway musical phenoms (“Hair” in the late 1960s, “A Chorus Line” in the 1970s, Andrew Lloyd Webber’s operatic tuners in the 1980s, and so on) emerged.

But largely because high school and college drama programs loved doing a show dominated by adolescents and young adults, and literally millions fell in love with the movie, “West Side Story” was still dusted off and presented frequently, and internationally — though Robbins’ 1980 revival was the last time it was seen on Broadway for the next 40 years.

The first time I reviewed it, in the 1990s at the 5th Avenue Theatre in Seattle, my memories of the show’s power were nearly shattered. The dancing was rudimentary, pedestrian. There was no sizzle between Tony and his great love Maria. Lackluster, dated — it made me wonder if the show had truly lost its mojo. Or never had as much as I thought.

But a few years later, Robbins himself supervised a 1997 tour that was touted by Laurents in an interview I had with him for The Seattle Times. The cast was composed largely of Chicago youths, just out of college and drama school. They were drilled by Robbins (a notorious taskmaster) to perfect the extremely demanding choreography, with its balletic rigor and acrobatic jazziness. And this rendition was more sensitive to the contemporary issue of casting; it placed mostly Latinx performers in the Puerto Rican roles – which the original production and the movie (which slathered the Sharks gang in dark brown makeup) had not.

I knew then, that “West Side Story” didn’t work without real passion and extraordinary craft. So my love affair with it wasn’t renewed in earnest until 10 years later, when the 5th Avenue Theatre (under different management) revived the show in tune with the 50th anniversary of its Broadway premiere. With 43 seasoned performers on stage and 25 musicians in the orchestra pit, and with the Robbins choreography mated with sharp fresh direction and sets, the production fulfilled all its musical and dramatic promise.

It also was ushering in a new era of worthy “West Side Story” remountings and an idea that stuck in my head: Why not write a book about a show that, even a half century after its initial impact, still captivated, and remained a dynamic source of praise, debate, cultural influence and international box office appeal?

I spent the next two years researching and writing “Something’s Coming, Something Good: West Side Story and the American Imagination.” It was a deep dive into the cast of vibrant characters who concocted the musical in a lengthy and dramatic collaboration. I examined the show’s historical and political context, its profound impact on the perception of youth violence and on the future of the American musical, on the differences between the stage and cinematic versions, and so on. Around the time the book came out in 2011, there was a reawakening of national interest in the show – with more high-profile productions, and numerous other books arriving, including an oral history by some of the show’s original cast members.

It was big (and surprising) news when, in 2019, two contemporary Jewish artists of great repute and success — Steven Spielberg, and Tony Kushner –- decided to make a new film of “West Side Story.” (They were in love with the show too.) Justin Peck (a dancer-choreographer for the New York City Ballet, a company Robbins worked with for most of his artistic life), fashioned new dance numbers for it.

And the latest chapter in my intimate relationship with this beloved, maligned, enduring vestige of mid-century American invention? The New York Times invited me to participate in a published roundtable discussion about “West Side Story,” framed as a “great debate” about the show’s representation of Puerto Ricans.

I wasn’t really prepared to be on the defensive, and it was a no-win argument for me, as two fervent Puerto Rican critics of the musical blasted it for cultural insensitivity and inauthenticity, and blasted Spielberg and other non-Puerto Rican artists for remaking it. A Puerto Rican playwright at the table expressed more nuanced, conflicted feelings about the show (and so did Broadway wizard Lin-Manuel Miranda when he spoke to me for my book). That left me and Times theater critic Jesse Green to defend the musical’s very existence.

I can’t begin to encapsulate the multi-layered and polarized discussion here. It’s all on the [public record(https://www.nytimes.com/2021/12/01/theater/west-side-story-steven-spielberg-movie.html), and has drawn more than 1,200 comments on the Times website and many fierce comments on Twitter.

Still, whatever anger “West Side Story” arouses in some quarters, I’m convinced that it is firmly lodged in not just the Broadway musical canon, but the global one. It was originated in the post-World War II era by liberal men (two of whom, Bernstein and Laurents, were blacklisted in the McCarthy Era for their political views). The show’s creators believed American musicals could be more mythic, more tragic, they were men genuinely concerned with pressing social issues of bigotry, youth malaise and gang warfare. But they were also determined to use their imaginations and extraordinary skills to entertain as well as enlighten, to bring great pleasure as well as intense confrontation. And it still does that, with remarkable resilience.

So my response to new film? I approached it with the kind of anxiety one feels when encountering an old lover with a new mate. What would “West Side Story” be now, in the hands of a new set of artists, in a glossy Hollywood bid for success and relevance?

At first, I saw only what was gone that I missed: the inspired, breathtaking Robbins choreography, especially in the dazzling “Cool” number and the powerful “Somewhere” ballet (excised from the 1961 movie too). The more defined Jet comrades — A-Rab, Action, Baby John, Graziella. Some of the weird “frabba jabba” made-up slang in Laurents’ script.

But when I let go of that, and a few other things, I began to appreciate the new film’s achievements. Yes, the Puerto Rican characters do get more backstory and empathy. And Kushner’s script ingeniously addresses the damage done by so-called “urban renewal,” as it displaces communities. And yes, the performers can all sing the Bernstein-Sondheim songs in their own fine voices (some were dubbed in the 1961 film), as well as execute Peck’s robust choreography. And the Tony/Romeo and Maria/Juliet here (Ansel Elgort and newcomer Rachel Zegler) have a sweet, puppyish rapport and vulnerability that Richard Beymer and Natalie Wood sorely lacked.

The gang violence hits home in ways that it wouldn’t back when news of teenagers murdering one another in the streets was shocking. And Spielberg, at times maligned for his sentimentality, does not shrink from that ongoing tragedy.

And the visuals — well, no surprise — are splendid, from the gritty rubble in the street to the bright Crayola allure of the Gimbel’s department store where Maria sings “I Feel Pretty.”

One can get besotted with the Spielberg version. Or prefer the 1961 movie, with flaws but the Robbins dances intact. Or one can savor both. And there is always the stage edition, which will continue to be produced by generations of musical theater artists with their own twists, slants and reinterpretations. Just like “Romeo and Juliet.”

Misha Berson is the former longtime theatre critic of the Seattle Times, now a freelance writer and University of Washington instructor. Her books on theater include “Something’s Coming, Something Good: West Side Story and the American Imagination” (Applause Books) and “Between Two Worlds: Contemporary Asian American Plays” (Theatre Communications).