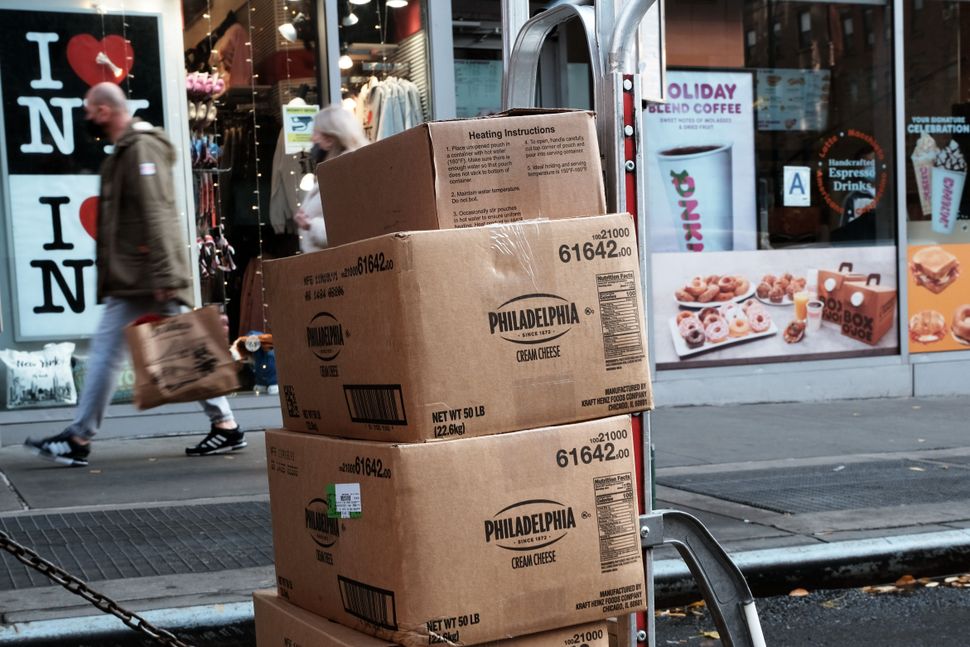 Kraft Heinz, the producer of Philadelphia cream cheese announced they will pay select customers $20 each to not bake cheesecake for Christmas.

The promotion comes as New York area bagel shops and other cream cheese users are running out of Philadelphia.

A Forward investigation revealed that the cream cheese shortage is connected to limited water supply in Lowville, New York, the upstate village where Kraft has one of their largest cream cheese factories. Recent regulations of the creamery’s water usage combined with spiking demands of cream cheese for holiday cheesecakes created a sudden schmear deficit.

On Dec. 17 and 18, up to 18,000 cream cheese-deprived customers will be able to sign up to be reimbursed for other desserts and ingredients. The promotion called “Spread the Feeling” is intended as a sort-of apology to those who can’t find cream cheese to bake cheesecakes, a Jewish dessert that has become a Christmas dinner staple.

While the Chicago headquartered company has found a way to turn a crisis into a marketing opportunity, they have refused to answer questions about the causes of the cream cheese shortage or their responsibility in Lowville’s water issues. Over the summer, as cream cheese production peaked, the village worried there wouldn’t be water left for the local hospital.

The campaign to turn the Christmas cheesecake tide runs counter to the message of one of Kraft’s largest cream cheese customers, Junior’s. The Brooklyn restaurant turned national brand experienced a 55% increase since 2019, as Americans looked for comfort food during the pandemic.

Junior’s now uses over 4 million pounds of cream cheese annually with business reaching its apex during the holiday season. Last week, the cheesecake giant temporarily shut down production when their orders of Philadelphia from the Lowville plant failed to arrive.

Third-generation owner Alan Rosen implored customers to get their cheesecake orders in early. “Bagels on a Sunday with a schmear is one thing,” Rosen said in an interview with Bloomberg, “but Christmas without cheesecake is another.”