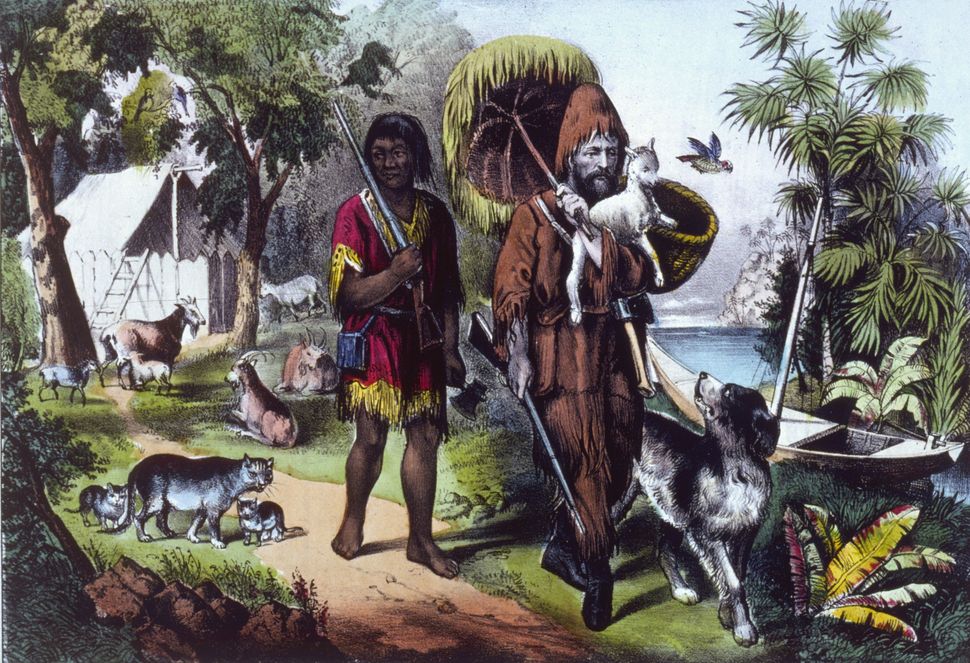 This month marks the 300th anniversary of the death of Alexander Selkirk, the Scottish sailor who served as inspiration for Daniel Defoe’s “Robinson Crusoe,” a novel cherished by generations of readers.

The tale of the shipwrecked mariner, first published in 1719, pleased a wide readership avid for adventure stories, like the Jews who relished travel tales such as “The Itinerary of Benjamin of Tudela,” the medieval voyager.

Yet multiple Yiddish and Hebrew translations of “Robinson Crusoe” suggested that a more profound allure was at work. In October 1937, the Polish Jewish author Moyshe Taykhman analyzed Jewish versions of “Robinson Crusoe” in the Yiddish cultural periodical “Literarishe bleter.” Taykhman, who would be murdered with his family in the Bialystok ghetto during World War II, concluded that for leaders of the Jewish Enlightenment, “Robinson Crusoe” was an ideal didactic vehicle, offering lessons interspersed with entertainment.

Messages about Jewish life were inserted in these new versions to edify children and adult readers. The eponymous hero’s piety, diligence, ingenuity and survival skills when faced with ordeals were to be admired. Yet even more essential was the message of reciprocal altruism, underlined in German translations which served as sources for the Yiddish and Hebrew versions.

God commanded in Leviticus 19:18, “Love your neighbor as yourself,” a concept which Hillel the Elder deemed the most important message of the Torah. Hillel restated it in the Babylonian Talmud as “What is hateful to you, do not do to your fellow.”

So, anti-slavery messages not propounded by Defoe were added to later German, as well as Yiddish and Hebrew, adaptations of “Robinson Crusoe.” These were especially evident in a 1820 Yiddish version by Yoysef Vitlin, which renamed the title character Alter-Leb (old darling) while his companion Friday became Shabes (Sabbath).

Alter-Leb was an observant Jew from Hamburg who educated Shabes, who in turn instructed his friend in fire-building and other practical know-how. After far more human exchange than Defoe described in his original, Alter-Leb and Shabes arrived in Europe, where tellingly, they married wealthy brides and fathered many children.

This fulfilment of the exhortation from Genesis 1:28 to “be fruitful and multiply” was unlike the stern Protestant ethic of Defoe’s text and German translations that showed Robinson as opting for celibate life after rescue and scorning earthly riches.

Clearly, Yiddish speaking Jews of the 18th century Enlightenment were not expected to renounce familial delights or dreams of prosperity. As Moyshe Taykhman observed, Defoe’s original book was not seen as an ideal for Jewish readers, but blended with elements from significantly altered German translations, an ideal pedagogical text was attained.

Some writers, such as Elizabeth Caldwell Hirschman and Donald N. Yates have asserted that Defoe was of Sephardic Jewish origin, from a family originally named Foa. Hirschman and Yates claimed to see Defoe’s social concerns and religious beliefs as akin to “those of a self-conscious British Jew of the 17th and 18th century.”

However, most literary authorities concur with the literary historian Maximillian Novak that Defoe’s Jewish characters are “always ignoble.” This “strong antipathy” was inspired by a Protestant sense of “rigid separation between those destined for future salvation and those who must be damned.”

Close to this sensibility was the 18th century German attorney Christoph Gottlieb Richter, to whom are attributed antisemitic tracts such as “The Jewish Robinson.” It tells of Robinson ben Achrach, a wealthy Jewish merchant from India who is shipwrecked on his way to the Dutch East Indies, and lives on a deserted island.

This fictional tale, published around 40 years after Defoe’s original appeared, followed Defoe’s own view of Jews as “agents of Satan” who rejected Jesus as the Messiah. Yet early Jewish readers, doubtless accustomed to seeing this level of vilification in secular European reading matter, eagerly co-opted and transformed the initial narrative to convey their own personal messages.

Part of the challenge of these metamorphoses was finding a new vocabulary for terms not available in biblical Hebrew. In “The Furnace of Affliction,” Yitzchak ben Moshe Rumsch’s Hebrew translation of “Robinson Crusoe,” published in Vilnius in the 1860s, modern Hebrew equivalents were coined for such words as telescope and compass.

In an introduction, Rumsch slated previous Hebrew translations as being suitable only for young children. The goal, Rumsch underlined, was to reframe the tale to express the “spirit of the Jewish people.”

Among Jews who needed no further persuasion to become entranced by “Robinson Crusoe” was Sholem Aleichem, born Solomon Naumovich Rabinovich in Russia. At age 15, he was galvanized by his first exposure to a secular novel. He quickly churned out his own version in the 1870s, “The Jewish Robinson Crusoe” (Der Yiddisher Robinson Crusoe), destined to remain unpublished.

Even earlier, the pioneering Yiddish dramatist Shlomo Ettinger had lauded the Yiddish story featuring Alter-Leb for its populist style. For Ettinger, writing in simple Yiddish terms that would be understood by all meant that ideological messages could be more easily conveyed.

Less message-driven was the immigration rights activist Mary Antin, who delighted in reading a translation of “Robinson Crusoe” in her uncle’s home in Vitebsk, Belarus in the late 19th century. Antin’s “From Plotzk to Boston: An Immigrant’s Story,” Antin recounts how on her voyage to America, she imagined herself “all alone on the ocean, and Robinson Crusoe was very real to me.”

Doubtless he was also real to the so-called Robinson Crusoes of Warsaw. After the 1943 Warsaw Ghetto Uprising, these insurgents, mostly Jewish, continued to hide in the ruins of the German-occupied city rather than risk being captured and executed, until the liberating forces of the Red Army arrived.

These Polish Robinsons included the composer Władysław Szpilman, whose memoir “The Pianist” received a celebrated screen adaptation. Another was the diarist Dawid Fogelman, who noted: “We lived like Robinson Crusoe, with the one difference that he was free, could move about freely, while we lived in hiding.”

Szpilman also noted in his own accounts that the Polish Robinsons, prey to isolation and hopelessness, endured rather worse conditions than Defoe’s protagonist. Other descriptions of the same historical situation included “The Bunker” by Chaim Icel Goldstein and “Karski’s Bodyguard” by Dawid Landau.

Further use of “Robinson Crusoe” as an emblematic tale of survival was evident in postwar novels, labelled as Robinsonades for the way they adapted Defoe’s themes to address contemporary concerns. These included the Scottish Jewish novelist Muriel Spark’s “Robinson” (1958) although devoid of specific allusions to Yiddishkeit, and especially Bernard Malamud’s “God’s Grace” (1982).

Malamud detailed how his protagonist Calvin Cohn tried to rebuild Jewish culture after a nuclear war. In doing so, Malamud managed to celebrate life and optimism, amidst a disputatious rapport with the deity.

Unlike Defoe’s hero, whose appetite for sea voyages made him disobey paternal strictures, Calvin Cohn abandoned rabbinical studies but took along on his travels recordings of his father’s voice, which he played obsessively after his shipwreck like an ironic variation on “Desert Island Discs.”

No less inspirationally through the years, Jewish readers would absorb Daniel Defoe’s immortal novel in its original and adapted forms, hearing it read to them as children and enjoying it for themselves later on.