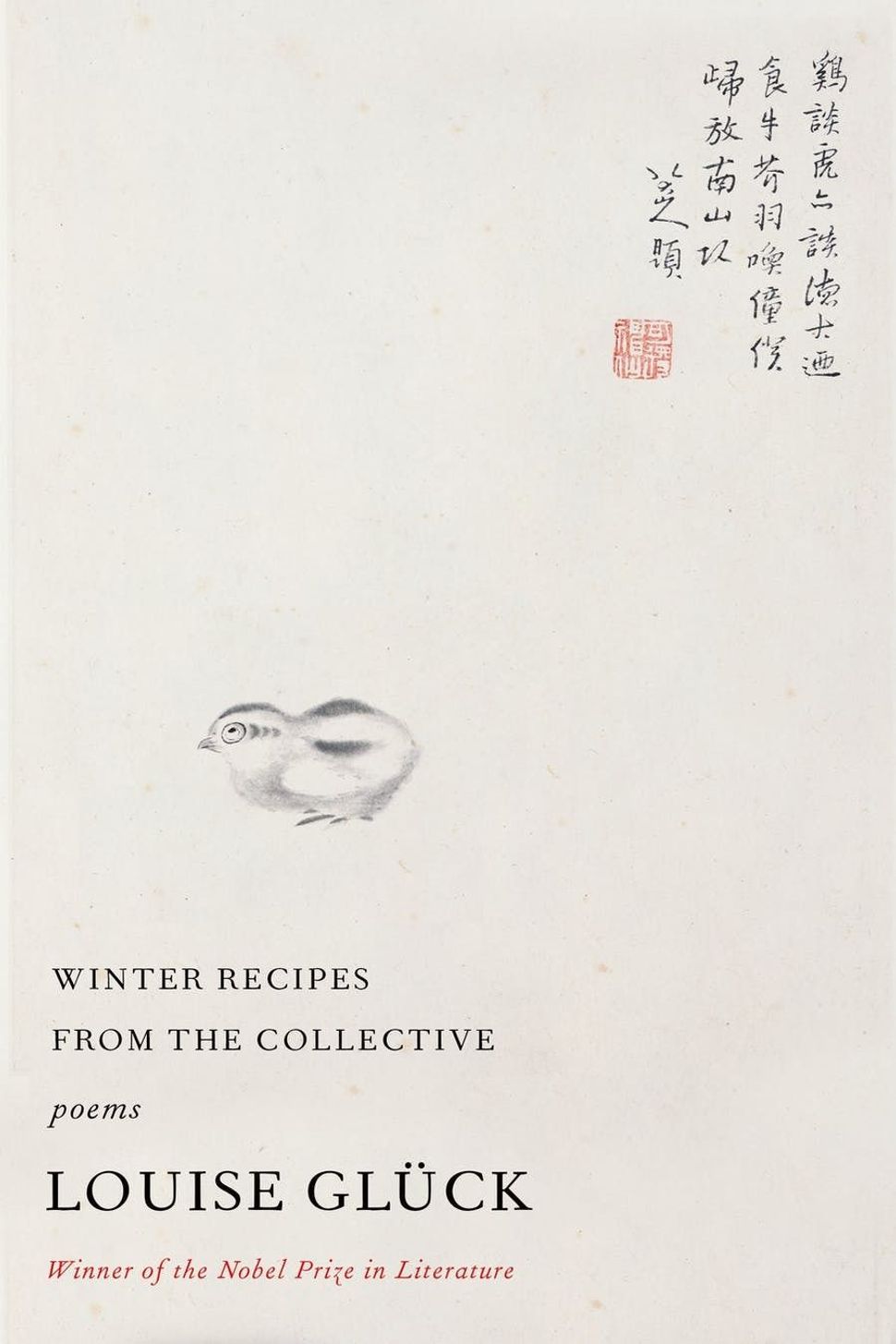 You Can Tell a Book By This Cover: The beauty of the outside of Louise Glück’s new collection matches its interior. By FSG

Winter Recipes from the Collective

The new book of poetry from Louise Glück — her first since she won the Nobel in 2020 — provides a steady unfolding of meaning, quite out of proportion to its brevity.

Comprising 15 poems spread out over 40 pages, the first thing that strikes you about the book is its beauty as an object. The hardcover presents us with an elegant puzzle on a plain ecru field. A sternly-embossed title and author (“Louise Glück” in black, “Winner of the Nobel Prize in Literature” in red) sits below a Chinese poem and drawing of a surprisingly cute baby chick, both by 17th century artist Bada Shanren. Life, literature, art and achievement are all implied, but what does the calligraphy poem mean? (it is, apparently, confusing even to Chinese scholars, totally opaque to others) What is the purpose of the chick? How does it relate to this collection? 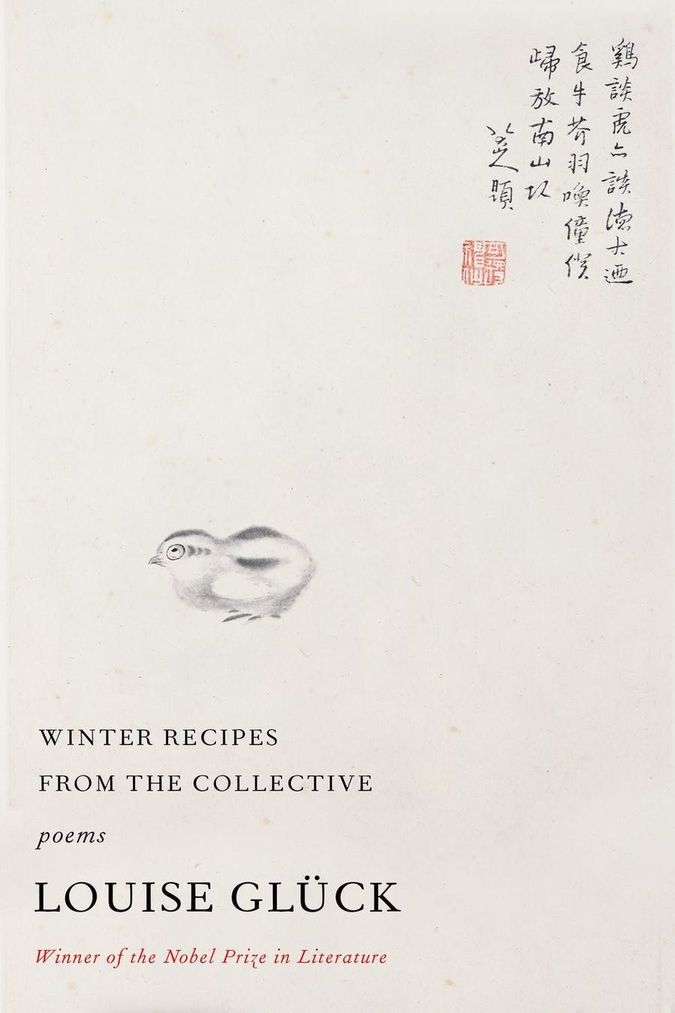 You Can Tell a Book By This Cover: The beauty of the outside of Louise Glück’s new collection matches its interior. By FSG

Inside, the luscious paper provides plenty of white space around the words as well as restful empty pages that remind us of its “winter” contents. But unlike, say, George Oppen’s “The Materials” in which a comparably few pages aim to present a skeletal and “objective” reality behind the illusion of life, “Winter Recipes” sketches subjective shapes and is “filled with stories of every kind.” The writing is designed to be read and revisited, and the construction makes that a pleasant occupation. In “The Denial of Death” we are shown a model of contemplation that we are prompted to consider.

“… isn’t the life of the philosopher

exactly as you describe, I said. Going over the same course,

waiting for truth to disclose itself.”

Dedicated to her friend, the novelist Kathryn Davis, “Winter Recipes” is surprisingly narrative. The poem “An Endless Story” tells the story of a story. It makes a virtue of an interruption of what might well have otherwise been considered, “A love story such as silly women tell, …/ meant to disguise the fundamental / tedium of its simplicities.”

Other characters in the poem propose conclusions to the story but it remains endless. Glück closes it with a series of attributed assertions about the nature of experience and repetition. It’s worth remembering that “room” is the English for “stanza” and that these comments can allude to the act of reading and the “life of a philosopher” in suggesting that the search for wisdom, the search for truth and the search for love are all endlessly iterative.

“The Chinese were right, she said, to revere the old. / Look at us, she said. We are all of us in this room / still waiting to be transformed. This is why we search for love. / We search for it all of our lives, / even after we find it.”

In the major double pivot early in the book, the two-part poem, “The Denial of Death” tells the tale of a trip that ends prematurely. It foregrounds short physical documents and seems to be a way of talking about life and how we write about it. For “The Story of the Passport” (the second part) the loss of the passport marks a beginning.

“Do not be sad, he said. You have begun your own journey,

not into the world, like your friend’s, but into yourself and your memories.”

The sadness of this break, and journey into words is echoed in the later “Night Thoughts.”

“What a shame I became

verbal, with no connection

to that memory. My mother’s love!”

Kinship — played through children and mothers, sisters, aunts — is an ongoing preoccupation of the poems. But here the line breaks and the punctuation that separate “memory” from “My mother’s love” leave no doubt that the movement into language has been profoundly traumatic. Yet language is where we find truth and love — where we find each other.

Subjects and objects in these stories — whether “bonsai” or “bowls” or “you” or “I” — are physically evoked while their final meaning, if such a thing exists, remains elusive. A “travel diary” (which also gives its name to the first part of “Denial of Death”) is one character’s name for “my own experience but more beautifully related.”

As the “concierge” says of the travel diary, “I often called it The Denial of Death, after Ernest Becker.” Illustrative of how quickly referents slip, the speaker conflates the poem itself and the diary with a Pulitzer Prize-winning non-fiction book proposing that civilization grows up as an “elaborate, symbolic defense mechanism against the knowledge of our mortality.”

Glück makes no claims for comprehensiveness. This is a book for winter, a hard, cold season when sustenance is scarce and food must be foraged and carefully prepared. In the title poem, moss needs to be chosen precisely and fermented — cured through the passage of time. Living, as we do in 21st century America, surrounded by a surfeit of manufactured stuff and having brutally defaced the natural landscape, it is hard to feel the urgency of the “old men” who enter “the woods” to find “certain junipers” so they could “gather the moss.”

Some of the moss is used for bonsai, the cultivation of which requires a long apprenticeship. The grace and elegance of care taken with the presentation of the book — just as with the bonsai “for which / a small room had been designated” — is testament to the shaped, pruned, minimal life of the poetry. The bonsai are too delicate for beginners, but they, too, are included.

“Those of us who watched / sometimes chose the container, in my case / a porcelain bowl, given me by my grandmother.”

The bonsai symbolize the living poetry, but also life, thought, language. Asking “What do “bonsai” stand for?” is just another reason to go “over the same course,” seeing whether truth will disclose itself.

Recipes are instructions. They are words that guide us through strategies for taking the raw ingredients that surround us and transforming them into nourishment and delight. That they are from the “Collective,” feels unusual to most native English-speakers. It echoes with connotations of communal living or thinking — either hippie or Chinese Communist. But once we go beyond the word to the concept, we refamiliarize ourselves with the idea that we are part of a group that transcends our own sense of belonging. We have commonality with people beyond our family, city, credo.

The food that is produced is as delightful as possible but is produced of necessity and, whether fermented moss or unleavened bread, its form reflects the vicissitudes of its context. Glück alludes to the Jewish food that is so much more than a food, a symbol of affliction, prior bondage and the centerpiece of the Seder — a ritual of re-reading.

“it was what you ate / when there was nothing else, like matzoh in the desert, which / our parents called the bread of affliction”

The collection is made for a difficult time of dearth. Whether that’s the scarcity of food in winter, scant time remaining in a life or just the difficulty of making meaning now that we are, constantly, inexorably, noisily, “verbal.” But, as with most darkness, there are moments of dark reflection. Remembering the sun and how “joyful my head was” before the “menacing” clouds of “Presidents’ Day” the narrator comments,

we haven’t used in a while.”

And occasionally even, Glück evinces a dark humor. In “Autumn,” a sister appears. “Life, my sister said, / is like a torch passed now / from the body to the mind. / Sadly, she went on, the mind is not / there to receive it.”

Though the tone of the poems varies from quietly descriptive to mordant to elegiac, there is an overwhelming sense of foreboding. There is so much to concern us, from those menacing clouds of “President’s Day” to the opening line of “Memory” where “A sickness came over me,” from “A Sentence” starting with “Everything has ended,” to images of the “mother” from childhood that are both “strong” and “foreboding.”

Just as we think that this is a collection of elegy to a life that is close to passing, we remember that the solstice is near and perhaps things will get better as the cycle continues.

“Winter Recipes From the Collective” ends with “Song” which introduces the “white bowls” of a “Leo Cruz” who “makes porcelain in the desert.” As with much in this collection, the voices and identities of the characters in the poems are slippery. The narrator — in this case a singer whose voice is close to that of the main narrator, perhaps close to Glück’s voice too — sings a note of hope. The final poem does not end with a period, there is no full stop to the “Song” — the narrator continues to dream, the reader returns to the beginning:

“And I say then I’m glad I dream

the fire is still alive”