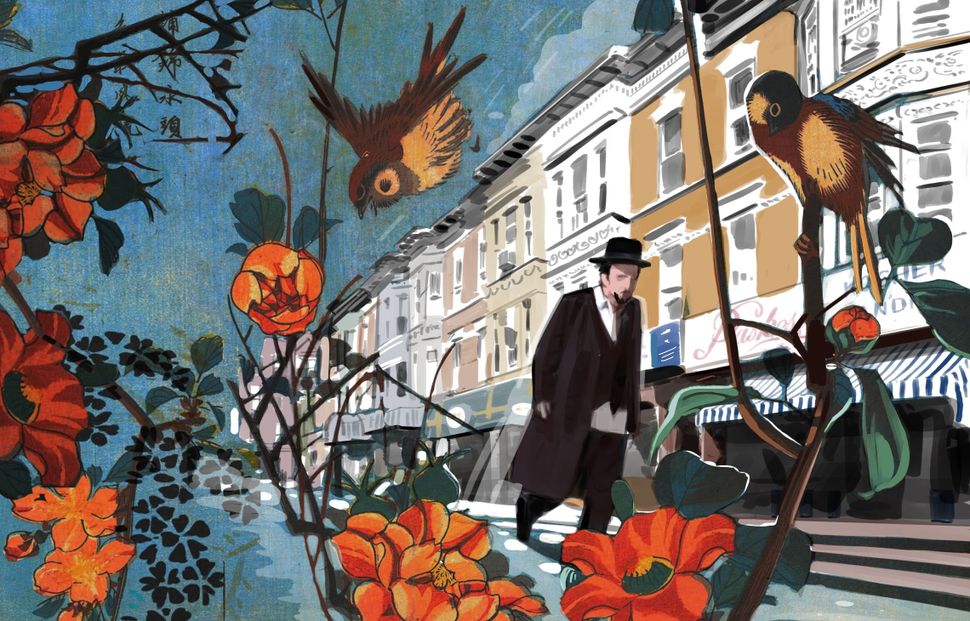 A man in Hasidic garb shuffles along a New York street

In my work as a reporter in the New York Bureau of a Japanese newspaper, I used to periodically interview Henry Kissinger.

Every couple of years, for nearly two decades, I’d accompany a colleague from Japan and pay a visit to Kissinger Associates on Park Avenue.

In much of East Asia, Kissinger is still viewed as a wise man and a figure of great historical importance, and these interviews were a big deal for our newspaper. We’d listen attentively to Dr. K’s gnomic responses to our questions, and at the end of each of our interviews, Kissinger invariably would look me up and down and in his Teutonic accent say: “Margolies. Margolies. You are zee first Japanese Jew I have ever met.”

This is not a story about Henry Kissinger. But it is about the first Japanese Jew that I met.

In the 1990s, our bureau’s office was in the Associated Press Building at Rockefeller Center. It was not uncommon in that pre-9/11 world for visitors to show up at our office without an appointment. As the junior person, and the only native English speaker, I often had the chore of dealing with these uninvited guests. Several American World War II veterans showed up with Japanese flags and the personal effects that they had taken off dead Japanese soldiers as war trophies while fighting in Okinawa or Iwo Jima. They hoped to reunite these belongings with the families of the dead soldiers.

One day our receptionist came to my desk and told me there was a man who insisted on talking to someone.

I came out to meet him and saw standing just inside the doorway of our office a man wearing a long black coat and a black hat. He looked like he might be Japanese. Upon seeing me, he quietly said, “Shalom.”

The man appeared to be about 30 years old and spoke English passably. After we exchanged pleasantries, I asked him why he’d come to our offices. He proceeded to tell a long and strange story.

His Japanese name was pronounced as “Aah-beh” and in English was spelled Abe.

“It is quite fortunate because, quite naturally, my family name led to my Jewish name, which is short for Abraham. So please call me Abe,” he said.

When I told him my name was Jacob, he seemed overjoyed. “We share the names of the patriarchs,” he informed me.

Abe said he had grown up in western Japan. In university, he’d studied religions and at some point he’d become especially interested in Judaism.

I knew that some Japanese had a fascination with Jews. In fact, there is a whole literature in Japan devoted to the subject. As well as serious academic works, there are many popular titles that traffic in philosemitism or antisemitism, or quite often a combination of the two. When I’d applied to work at the bureau, the first question the Japanese correspondent interviewing me asked was, “What can you tell me about the Jewish Defense League?” Not long after that, the same reporter, who eventually become a close friend, told me about the vital role Jacob Schiff, the Jewish-American banker, played in financing Japan’s military efforts in the 1905 Russo-Japanese War. “We owe your people a lot,” my colleague declared with some feeling after a long night of drinking.

The peculiarities of Japan’s philosemitism notwithstanding, Abe’s apparent adoption of Hasidic garb and his confident sprinkling of Hebrew and Yiddish expressions in his speech seemed more than a little bizarre to me.

“What’s with the black hat?” I asked Abe.

“I am living in Borough Park and studying with a very great teacher, a Rebbe,” he said.

He couldn’t really explain the reason for his visit to our offices. I suppose he was lonely, and was hoping that we would write about him. Of course, there was no possibility of our writing about him. Our job was to report on New York and America, not about someone who had dropped out of Japanese society and was searching for meaning deep in the bowels of Brooklyn. And a Japanese reporter poking around Borough Park wasn’t likely to endear Abe to the “very great” Rebbe with whom he was studying. I politely told Abe all of this while parrying his efforts to discuss theology. He seemed disappointed.

“You should put on tefillin,” he told me before leaving the office.

Two weeks later Abe was back again. It wasn’t an especially busy afternoon, and, as I found him intriguing, we sat down and talked again in our conference room.

“Why not try a Reform or Conservative congregation in Manhattan?” I asked him. “You’d have a better chance to find a partner there, and there is path to conversion if that’s what you want.”

“I want to study the Torah with the Rebbe. What you’re suggesting is out of the question for me,” he said.

“If you’re set on Hasidic life, you might do better in Crown Heights than Borough Park,” I suggested. “The Lubavitchers are more welcoming.”

“My Rebbe is in Borough Park,” Abe said. “Besides, the Lubavitchers are saying their leader is the Messiah. This is not the right path.”

Perhaps I should have found a Japanese national’s declarations on the superior authenticity of his favored form of ultra-orthodox Judaism insulting, or at the very least presumptuous, but I had begun to feel some odd kind sympathy for Abe and his spiritual struggles.

“Do you know about Sugihara? And have you visited the Jews in Brooklyn that he rescued from the Holocaust?” I asked.

“Sugihara? I know a little, but I didn’t know there was a Brooklyn connection,” he said.

During World War II, Chiune Sugihara had been a diplomat at the Japanese Consulate in Kaunas, Lithuania. In July and August 1940, without authorization from his government, Sugihara issued thousands of exits visas to desperate Jewish refugees. Many traveled to Kobe and later continued on to Shanghai, where they lived until the end of the war.

Among those who escaped Europe with Sugihara’s help were the students and teachers of the Mirrer Yeshiva. After the war, many connected to the Yeshiva settled in Brooklyn, and they have a large and prominent haredi yeshiva located on Ocean Parkway. At the time I met Abe, Sugihara’s benevolence had just started to be recognized after decades of obscurity. As a school project, the Mirrer schoolchildren had in that past year interviewed their relatives and learned about Sugihara and the heroic role he played in their grandparents’ surviving the Holocaust. That same year, a group of the students had visited the Japanese Consulate. I reported on the story and later met family members who felt indebted to Sugihara.

I recounted all of this to Abe and gave him contact information for a couple of people I had talked with earlier in the year.

When Abe left the office, I wondered if it might be the last time I’d see him.

A couple of months later he showed up a third time. He looked a little weary, his eyes were watery, and I noticed that his frock coat was dirty. When I asked about his meeting with the children of Jews that Sugihara had rescued, he shrugged and waved his hand away.

“They were fine, but it is not important. To find a wife — this is the problem. The Rebbe says it will be very difficult,” he said.

I was working on a deadline, so I excused myself after a couple of minutes. That was 30 years ago and I haven’t seen or heard of Abe since.

Since the pandemic started, I’ve been working mostly from home and have been thinking about some of more unusual episodes that happened in the workplace when things were different. 30 years, a generation, have passed since Abe visited our offices. What might have happened to him? I can only remember his last name. And given this was the pre-digital world of 1991, there is nothing today to Google or look up. I only have my memories, confirmed to an extent by friends and family to whom I had recounted this strange story at the time it was happening. So all I am left with all these years later is speculation.

My guess is that he ended up returning to Japan. Maybe he is teaching religion at a college in Hokkaido or Kyushu. Or perhaps he found a new passion entirely. Maybe jazz or bluegrass music, or one of the syncretistic new religions that gained a following in Japan after World War II. I wouldn’t discount the possibility of something far bleaker.

Was Abe’s enthusiasm for Hasidic Judaism a mania fueled by mental illness? It’s possible, although one reason I didn’t mind talking to him was that he always showed some awareness about the absurdity of his predicament. And maybe, just maybe, Abe was able to realize his crossover dreams. Could his children be pushing double strollers across the side streets of Borough Park and along 13th Avenue? I’d like to think it’s possible.

Jacob Margolies is a journalist working in the New York Bureau of The Yomiuri Shimbun, Japan’s largest newspaper. He is also the Managing Editor of Mr. Beller’s Neighborhood, a literary website focused on true stories set in New York City.