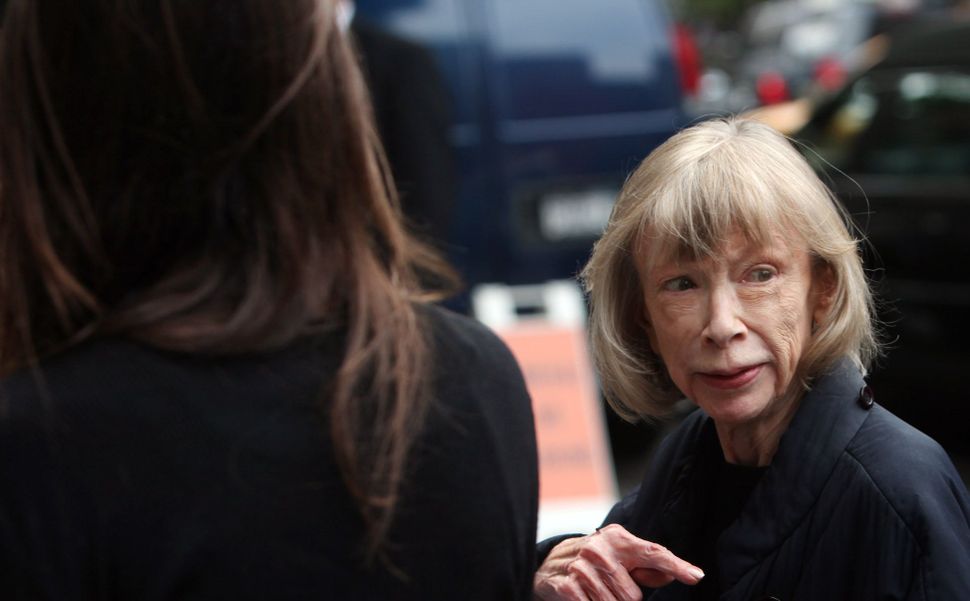 Author Joan Didion attends the funeral of Dominick Dunne at The Church of St. Vincent Ferrer on September 10, 2009 in New York City. By Rick Gershon/Getty Images

It’s the first thing I think about when I think about Joan Didion: not the extraordinary grace of her storytelling or her magical sense of language — those come right after — but a portrait of her, taken in 1996 by the great Jewish photographer Irving Penn.

There she is in black and white: 62 years old, almost all face and, frankly, almost all eyes. The Didion chic is there; most of us can only aspire to wear a chunky rib knit and eyebrow-skimming bangs with such, well, presence. But it’s the rare photograph of Didion in which her coolness, astonishingly, barely resonates.

What you see, instead, are those eyes, for once not shielded by her trademark sunglasses. She has enormous dark irises, so large they appear to be actively consuming any remnants of the whites around them. Her gaze is direct but gentle, twinkling, but not charming.

Looking at Didion’s eyes, through Penn’s, is like looking at a darkened house with a small, single light inside that is always, always on. It is eerie and entrancing. Everything happening there is secret, with one exception: you know that in her own quiet way, Didion is keeping watch.

That sense of constant observation was among the most remarkable things about Didion, who died Thursday at age 87. She was always looking, taking in every detail, never complacent in her own understanding. Las Vegas was not a city with a thriving drug culture; it was a city peopled by “ladies’ room attendants with amyl nitrite poppers in their uniform pockets.” Joan Baez did not just appear in court to hear arguments over whether her Institute for the Study of Nonviolence was disrupting the peace of California’s Carmel Valley. She sat, “very still,” in “a long-sleeved navy-blue dress with an Irish lace collar and cuffs.”

It mattered what the drugs were, what the lace was. There could be no clarity on matters of substance, Didion’s work suggested, without clarity on all their infinitesimal attendant parts.

For her, seeking that clarity was a mandate of existence: she simply had to be interested in everything around her. In her essay “John Wayne: A Love Story,” she wrote of being eight years old, stuck in dry, dusty Colorado Springs and deprived of any and every kind of excitement. But even boredom had its fascinations. “There was an Officers’ Club, but no swimming pool; all the Officers’ Club had of interest was artificial blue rain behind the bar,” she wrote. “The rain interested me a good deal.”

Didion and Penn had similar jobs. Both were observers: Didion, in her lovely and exact prose, Penn, originally a fashion photographer, in his ability to capture a character in their most perfect essence. That is how he captured her. To see Didion in Penn’s portrait, sitting with a half smile, her elbows pressed into a table, both hands cradling her face, is to see her at her truest — in the middle of seeing something interesting, in the middle of making meaning of it.

That impression creates a surprising sense of conflict. It is Penn’s job to observe and capture her. But you look at her, and you cannot help but think that the power in the interaction rests, in fact, with Penn’s subject. She is observing him. Soon, you think, she will capture him too.

Many of us, reading her work, have yearned to experience something of her raw power — to know what it would be like to really see as she saw, without the gloriously stylish framing that made her observations sing. We have wondered what it might be like to be so clear of eye, and mind, and purpose.

The closest I have ever gotten to seeing that uncensored view, and the closest I ever will, is in this portrait. It is how I will always picture her, pale and perfectly groomed, with an enviable collection of laugh lines. She looks at the man capturing her, or his lens, or even the imagined people who will someday stand in front of her immortal image and wonder what she’s thinking. She looks with curiosity, but also with confidence.

Perhaps she knew what we would see: ourselves, in all the unspoken details of our lives, reflected back.