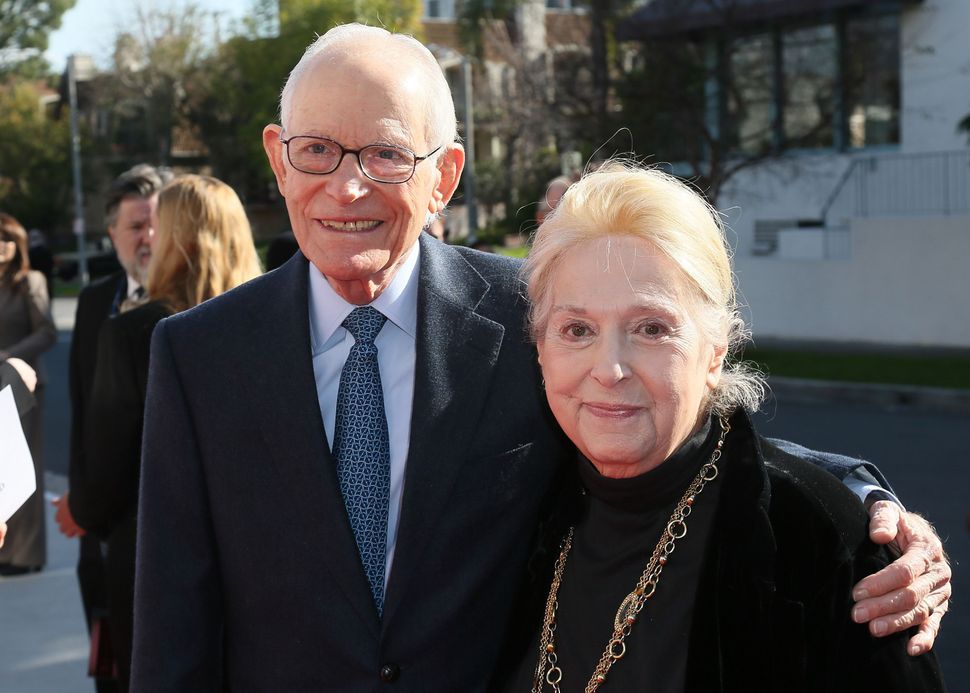 The song lyricist Marilyn Bergman, who died Jan. 8 at age 93, proved that secure understanding of a Jewish cultural background can lead to empathy for a world of other human experiences.

Celebrated for her songwriting duo with her husband, Alan Bergman, which produced hits such as “The Way We Were,” “The Windmills of Your Mind,” and the songs from “Yentl,” Bergman often stressed the importance of early exposure to culture during her Brooklyn childhood. As she told interviewers, the legacy of oppression in the Old Country for Jewish emigres made them urgently infuse their children with the arts, from mandatory piano lessons starting at age six to schlepping from Brooklyn to Manhattan for young people’s concerts conducted by Walter Damrosch, a maestro of Silesian Jewish origin.

As a result, when they were teamed by a colleague, the composer Lew Spence, they passionately expressed an escape from oppression through music. Understanding struggles of people from other ethnic groups, the Bergmans penned lyrics for the film title song of “In the Heat of the Night” (1967) to music by Quincy Jones. This became an indelible bit of Americana as sung by Ray Charles: “In the heat of the night/ I’m a-feelin’ motherless somehow…” A typical Bergman allusion was made to “Sometimes I Feel Like a Motherless Child,” a traditional African-American spiritual rediscovered in modern performances by Marian Anderson, Odetta, and Paul Robeson. 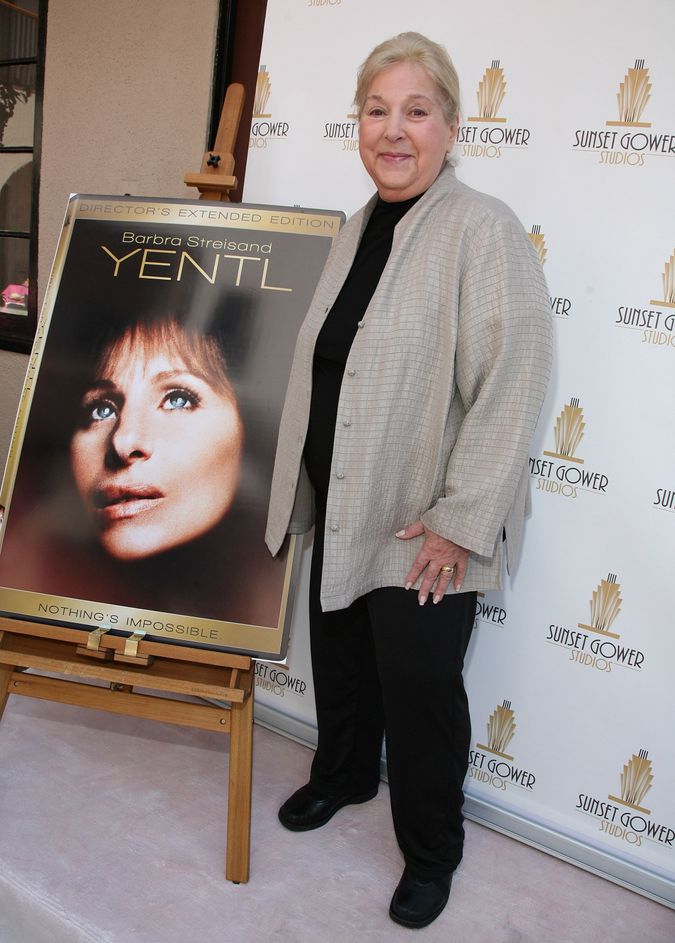 Streisand Was Her Muse: Marilyn Bergman co-wrote the lyrics to ‘Yentl.’ By Getty Images

Further delving into African-American musical experience was “Portraits in Jazz: A Gallery of Songs,” performed in May 2002 at the Kennedy Center, a collaboration with composer Cy Coleman (born Seymour Kaufman). One year later, this work was adapted as a music theater piece, “Like Jazz.”

In a more lightweight statement, the Bergmans adapted a venerable Haitian song, “Choucoune” as “Yellow Bird” for a 1957 recording by the American Jewish choir director Norman Luboff. In what might have easily been kitsch cultural appropriation common in that era, sympathy and charm were conveyed in the Bergmans’ wistful plaint with a calypso lilt about lost love and solitude. It was utterly unlike the original “Choucoune,” which is about the beauty of a Haitian woman.

But paradoxically, in the usually perfunctory and superficial domain of TV show theme songs, the Bergmans may have spoken from the heart even more directly than when communicating through characters in films or plays.

Their song introducing each episode of the 1970s sitcom “Maude” with music by Dave Grusin, of Latvian Jewish ancestry, is a feminist statement of identity and individual aspirations. It sounds fresher today than the now-dated show, which sometimes seems overacted and strident.

The beginning of the song, “Lady Godiva was a freedom rider,” reminds viewers of the Freedom Riders, civil rights activists who rode interstate buses into the Southern United States in 1961 and afterward to protest segregated public transport.

There were a number of Jewish Freedom Riders, including Judith Frieze, who in 1961 as a recent graduate of Smith College, joined African-American and white volunteers on a Freedom Ride to Jackson, Mississippi.

Braving violence from local racists and law enforcement alike, Frieze would be jailed for her advocacy, and in July 1961 wrote an article for The Boston Globe about her experience, headlined “My Ordeal in Dixie Penitentiary.”

Further examples of the Bergmans signifying with socially resonant terms include another collaboration with Grusin, the theme song for another Norman Lear-produced sitcom, “Good Times.” The show, about an African-American family in an inner-city Chicago public housing project, inspired the Bergmans to mention economic traps for the protagonists, including “temporary layoffs” and “easy credit rip offs.”

Ironically, the show “Good Times” itself would be the source of one permanent layoff, when Lear decided that actor John Amos was being too insistent about dramatic authenticity and integrity, and killed off his character after season three.

The Bergmans’ marriage lasted over 60 years, but they were able to capture the fate of a woman in love with a man whose emotional commitments were elsewhere in the song “Fifty Percent.” Written with the composer Billy Goldenberg for the televised musical “Queen of the Stardust Ballroom” (1975), later staged on Broadway as “Ballroom” (1978), this anthem of emotional resignation was performed especially memorably by Bea Arthur (born Frankel).

Although Marilyn Bergman’s well balanced sense of practicality led to a 15-year stint as president and chairman of the board of the American Society of Composers, Authors and Publishers (ASCAP), she was also able to capture the eerie otherworldliness of the multiple identity drama “Sybil” with music by the underrated Leonard Rosenman.

Their own domestic equilibrium did not prevent them from delving into family tsouris in such unjustly forgotten achievements as “Summer Wishes, Winter Dreams” (1973) to music by the undercelebrated Johnny Mandel.

Similarly, from the perspective of a fulfilling marriage, Marilyn Bergman was able to dramatize the situation of a bored housewife neglected by her husband in the song “The Girl Who Used to Be Me” for the film “Shirley Valentine” to music by Marvin Hamlisch.

Still awaiting rediscovery are the Bergmans’ lyrics to the 1964 musical, “Something More!,” written with composer Sammy Fain. By contrast, their work with the facile and sometimes syrupy Michel Legrand sometimes demonstrates how a sense of dramatic point in the lyrics saved his melodies from dissolving into easy listening saccharine goo.

Streisand likely realized that their bittersweet sense of reality anchored her in a superstar existence that might otherwise be devoted to having microphones painted white to suit her esthetic requirements and installing a personal shopping mall in the basement of her Malibu mansion.

“The Way We Were,” their mega-hit with Hamlisch, dissects the unsatisfactory relationship between protagonists of a 1973 film of that title, written by Arthur Laurents (born Levine). “What’s too painful to remember / We quickly choose to forget” is a psychologically astute observation, especially for America on the verge of a nationwide affliction with early stages of Alzheimer’s as experienced during the Reagan administration.

“The Way We Were” and its lyricists were much-honored, and in June 1974, critic Jon Landau of “Rolling Stone” even dared suggest that by bulldozing through the song in exalted diva mode, Streisand possibly scanted some of the subtle twists and turns of the lyrics.

This detailed artistry was by no means accidental. It was honed by diligent exercises, such as writing sample lyrics based on news items in the daily papers, to keep their reactive instincts agile and ready to respond immediately and pertinently to studio assignments.

In some songs, their precise lyrical images transformed a bland tune like “Sweet Gingerbread Man” with music by Legrand from the forgotten movie “The Magic Garden of Stanley Sweetheart” (1970) into a quasi-Freudian celebration of infantile orality through the incantatory power of sweets. Sung with dignity and distinction by Sarah Vaughan, “Sweet Gingerbread Man” acquired unsuspected stature.

Yet ultimately in the professional lives of the Bergmans, working with talented composers, many of them Jewish, allowed their abilities to flower without producing lyric-dominated songs whose main, if not only, interest was the words.