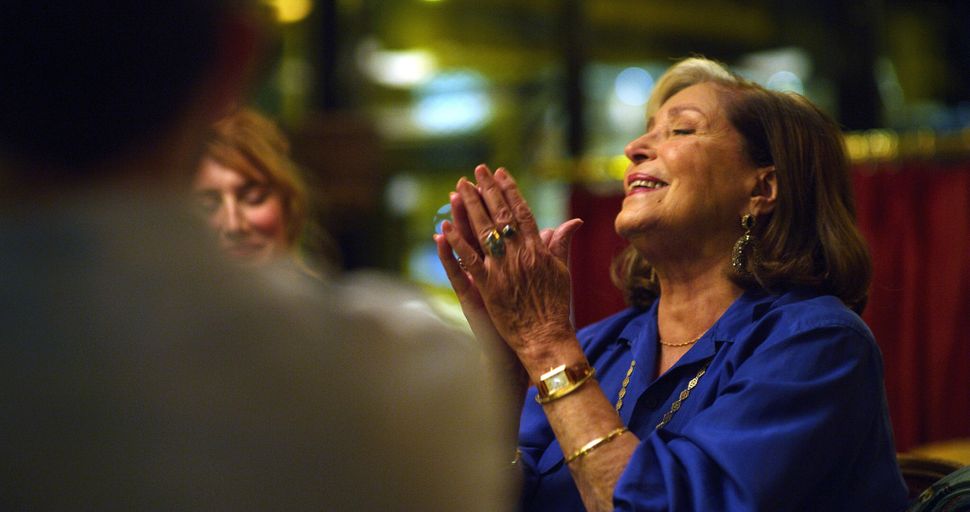 Françoise Fabian in “Rose.” Courtesy of The Jewish Museum

It sounds like a pat narrative — a grieving elderly widow discovers a new, thrilling version of herself in the wake of her husband’s death, learning to indulge in the twilight of her life. The message implicit in such a tale usually goes something like this: society-bound elders, having spent most of their lives in a more broadly conservative social order, can, in our enlightened present, find the freedom to live unrestrainedly.

“Rose,” the tender finale to the New York Jewish Film Festival from French director, writer and composer Aurélie Saada, is nominally such a story. The festival’s writeup introduces the film as a critique of “ageist and sexist stereotypes,” but that description makes the film seem narrower than it is. “Rose” is more than an account of an aging widow who gets a new lease on life; it is a treatise on pleasure, corporeal needs, physical satisfaction, and the tenuous relationship between social and therefore familial duty and personal, ephemeral indulgence.

Despite an evidently long and fulfilling marriage, Rose (Françoise Fabian) seems initially unable to forcefully engage with the pleasures of the present. In one especially moving scene, following the shiva meal for her recently-deceased husband, Phillippe (Bernard Murat), Rose unearths frozen poultry from the freezer. She attempts to enact an obscure ritual Jewish custom — animal sacrifice, since Phillippe died on a Friday — and, begging God to spare her son from legal punishment for a crime he has committed, hacks at the meat with a knife. She makes a few shallow cuts before melting tearfully into a chair.

It is fitting that Rose begins her journey through bereavement by stabbing futilely at a frozen animal carcass. Food, in this scene, is all concept; an offering in exchange for the family’s security. There is little sense of its earthly value, or of the sensory delight it might provide.

Eventually, Rose’s grief tips into and out of a fugue state, and she begins an unsteady climb from the trenches of mourning into a newly tellurian life. It is moving to watch Rose struggle, not exactly to like her body — the movie is too complex for that — but to live in it.

“What’s the point of pampering myself at my age, just to sit on the sofa watching ‘Countdown?’” she asks miserably of Laurent (Pascal Elbé) a suave bartender. Apoplectic with guilt following an attempt at indulgence that coincides with a family emergency, she sucks down a vodka with almonds, her late husband’s drink of choice. “I’m stupid. Have you seen my skin, my arms, my hands, my face, my breasts? Why bother?”

The movie is ready with an answer. Bother with the body because doing so feels nice. The camera seems captivated by Rose’s frame, following her feet and fingers and torso as they move through space. The attention seems less prurient than curious, and sometimes encouraging, as though goading Rose to take an interest in her physical form.

Lest the narrative risk adopting that overly simplified “elderly woman breaks free from prescriptive lifestyle” story, “Rose” uses Rose’s three middle-aged children to complicate its message. Just as Rose, at 78, tentatively entertains a prospect of new romance, so too does one of her sons; both, in different scenes, leaning over food and drink to admit with a deliberate coyness that they have not flirted with anyone besides their spouse in many years. Similarly, Rose and her daughter undergo romantic heartbreak in tandem.

In this movie, everyone sublimates desire. The emptiness Rose and her children evince isn’t unique to the elderly; it is merely that Rose’s widowhood provides the catalyzing grief and liberating circumstances to seek recourse. The movie in this way compellingly raises questions not merely about this particular woman’s relation to aging, carnality, pleasure, and existential meaning, but about the universal struggle toward and away from material joy.

These themes about earthly pleasure and pain can occasionally feel a bit forced, such as in a moment when, in the middle of a tender dance break, two characters strike up a slightly contrived conversation about food, all the better to emphasize the theme of sensuality. But if the movie can seem occasionally slow or obvious, one can always simply home in on Fabian’s expressive face, which is always doing something eminently watchable.

Fabian, a legend of French screen, began her career in the 50s and broke out in the late 60s, working with directors such as Louis Malle (“Le Voleur”) and Luis Bunuel (“Belle de Jour”). She has acted almost without pause in subsequent decades, appearing in over 80 films. After a lifetime of presenting herself to a camera, she seems able to channel a deft awareness of the cruel judgments we wield toward women’s aging bodies. In some moments she is heartbreakingly ingenuous; in others, she is gleeful and girlish, or else fearsomely self-possessed. Watch her look out through crooked glasses as the answering machine clicks on and her dead husband’s voice plays. Watch her drive a car she hasn’t handled for decades, sexy and cool and a little bit full of rage.

For all its interest in pleasure, the movie seems ambivalent about the moral attributes of hedonism. When Rose’s children object to her new lifestyle, neither Rose nor the movie seems completely convinced that their criticisms are misplaced. The characters appear to understand that indulgence and pleasure seem admirable in the abstract, but that in effect, physical joy is necessarily tempered by physical suffering.

Then again: a human life moves in only one direction, and inside one physical container. “To hell with age,” Laurent tells Rose, as music fills the bar she lives above, the bar she never once visited while her husband lived. “Getting old is the best way to stay alive.”