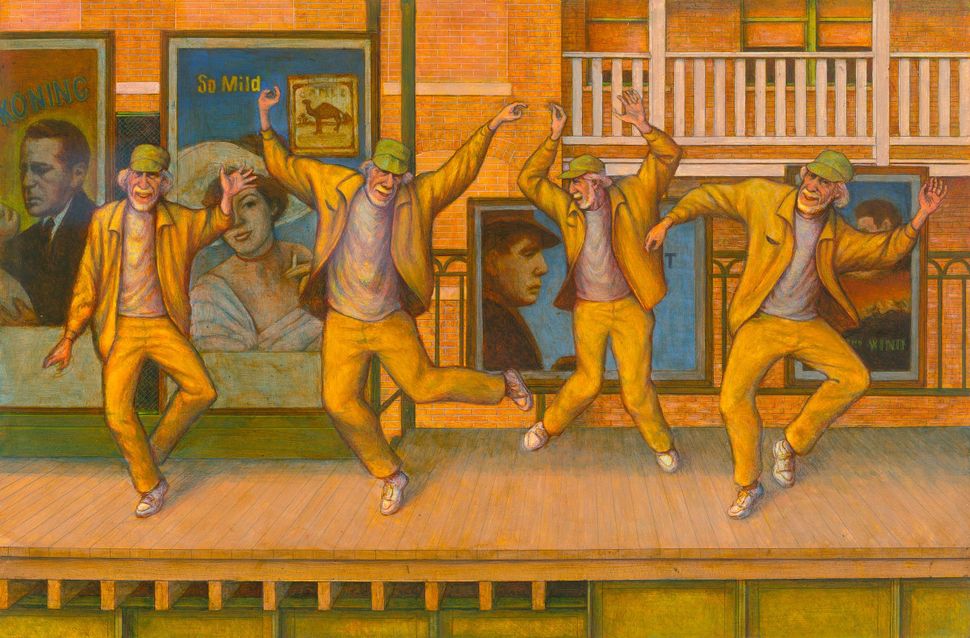 “Old Men Dancing: Artist Leo has lived in the same house in Evanston since 1967 but it’s his childhood in the 1940s on the Jewish west side of Chicago that truly shaped him. Image by Leo Segedin

“I remember showing off to my father by reading the Forverts in Yiddish. I can’t do that anymore!”

No, but soon-to-be 95-year-old artist Leo Segedin still paints. Every day, he gets up at 5 a.m., has coffee and a full breakfast and by 6:30 is at his easel. He works until his eyes hurt. Then, he switches to the computer where he writes. Leo has composed some 50 essays that range from explorations in art history and criticism to the history of the martini. He is also writing a memoir. After some time, he goes back to painting, then at 11:30 he has lunch. In the old days, he’d head back to his attic studio where he’d spend the rest of the day working. Now, at the urging of his twin sons Paul and Ben, his studio is on the ground floor. “They were afraid I’d fall down the stairs,” he told me.

I met Leo some 30 years ago, when we became neighbors. He has lived in the same house in Evanston since 1967 but it’s his childhood in the 1940s on the Jewish west side of Chicago that truly shaped him. Most of his paintings refer to that time, featuring tenement buildings, the seriousness of childhood games and the ever-present elevated trains. As a kid, Leo dreamt of being a pilot—and this image crops up frequently in his paintings. Rich Cahan, in his introduction to Leo Segedin: A Habit of Art, a 2018 coffee table book, compares him to Studs Terkel, the great chronicler of American life, stating that they both speak “Chicagoese.” When I first saw Leo’s paintings, the precision of his work was striking. But there was something more, a sense of familiarity, a shared experience that went beyond any specific geography. 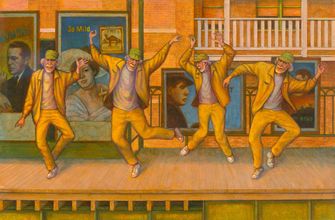 “Old Men Dancing: Artist Leo has lived in the same house in Evanston since 1967 but it’s his childhood in the 1940s on the Jewish west side of Chicago that truly shaped him. Image by Leo Segedin

Leo “backed into” art at the University of Illinois — he was a junior before he realized that art would be his life. During the Korean War, he taught drafting at the U.S. Army Engineer School in Virginia and that sense of craft is evident in his work. After the war, he was hired by Northeastern Illinois University where he taught art for the next 32 years. In the late 1950s, he exhibited with the American Jewish Artists’ Club, and founded Exhibit A, Chicago’s first postwar artist run cooperative gallery. Leo was included in Art in America’s “New Talent in the U.S.A” issue in 1956 and later, in “Harvest of Freedom: A Survey of Jewish Artists in America.” Despite this early attention, Leo never sought commercial success, believing that art is far more than a commodity. That being said, he is thrilled with his recent popularity. “It would have been nice 40 years ago, but I’m not complaining. I’ve had a life.” 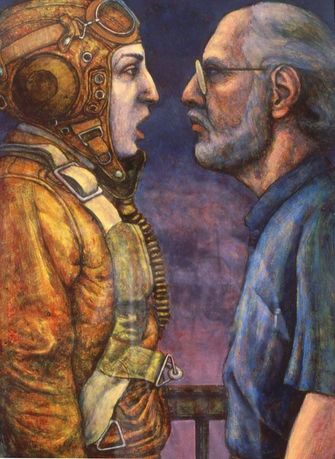 Confrontation: With his perfectionism and realism, Segedin has the technique of a great illustrator. Image by Leo Segedin

The perfectionism, the realism, in Leo’s work is evident — he has the technique of a great illustrator. What makes his work memorable is that it’s coupled with the eye and imagination of an artist. And while his paintings harken back to an earlier time, they are not nostalgic. “Nostalgia means you’re looking back at wonderful memories; you miss what you remember happened…whether it did or not,” he said. “It’s a romantic notion of the past. Memory can include that but it also can include things you don’t want to remember, things you try to block out.”

Leo’s painting “Hey Kid” is a good example. Initially titled “Are you a Jew?” it refers to the harsh reality of antisemitism as well as the segregation that still characterizes Chicago. “I was on the wrong side of Pulaski Avenue,” he said. 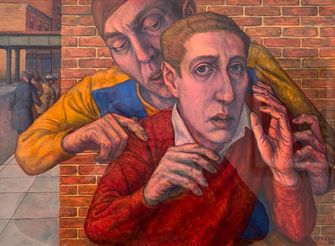 Placing himself in his remembered past is a hallmark of Leo’s work, whether depicting a confrontation with bullies or playing childhood games, a favorite subject. Play is serious business for Leo. Metaphors for adult behavior, they contain competitiveness, fear and uncertainty, set against an ever- present Chicago backdrop. In an interview for WTTW, Chicago’s PBS station, he said, “Childhood is still part of my life. It’s not something I outgrew.” Much of the power of Leo’s work is in the paths he creates for each viewer. His paintings give us the chance to look back and see ourselves in the making, for better or worse. 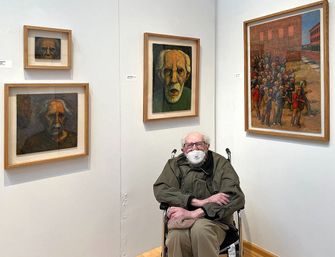 Portrait of the Artist: Leo Segedin: Self Portraits” is on view at the Koehnline Museum of Art at Oakton Community College in Des Plaines outside Chicago.

Self-portraits, the subject of his recent exhibition, have been a major theme for many years. When I asked him why he has done so many, he jokingly replied, “I’m a cheap model.” In reality, Leo said, “I see my history in my face.” By placing himself in his scenes, in some cases through multiple views, he goes beyond the perfection of his bricks or the beauty of his L stations to manipulate time and create visual stories. Chicago art critic Alan Artner once referred to Leo’s work as “magic realism” because while rooted in the everyday, there is always an improbable element, something beyond a strict recreation of a scene. For Leo, time is malleable; nothing is linear, past and present merge. It’s Einstein, not Newton on canvas.

Leo’s images don’t come entirely from his memory — he uses photographs as source material. According to him, it’s where the “information” comes from but the feelings he tries to portray aren’t in the photos. Despite his astonishing, meticulously drawn rendition of bricks for example, Leo said, “I never wanted to see what the buildings looked like. I wanted to see what they felt like.” 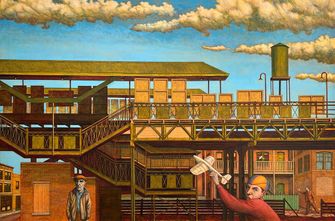 L Station (3 Ages): Segedin, who taught at Northeastern, has something in common with Studs Terkel, another famed Chicago chronicler of American history. Image by Leo Segedin

It’s that essence that Leo communicates, an emotional depth plumbed by both his craft and a vision honed over almost 80 years. Leo’s latest works explore aging. He has been making paintings of dancing old men, in stark contrast to the more sullen images of his childhood games. Leo contemplated moving into a retirement home several years ago. He told me that he just couldn’t see himself painting in an “Arts and Crafts Room,” where, in any case, the rarely used easels were covered in dust. So he has stayed in the house where he and his wife Jan brought up their sons (she passed away many years ago) and where his neighbors adore him. When asked if he could ever see himself “retiring” he says, “The thought of quitting painting? I’d die!”

Leo’s essays, paintings and a statement about his work are available on his [website] http://www.leopoldsegedin.com)

“Leo Segedin: Self Portraits” is on view at the Koehnline Museum of Art at Oakton Community College at 1600 E. Golf Road in Des Plaines, IL until Jan. 31.

Alan Teller is a photographer, writer, curator and museum exhibit developer based in Chicago.