Online, Zelenskyy has become a sex symbol. It’s getting weird. 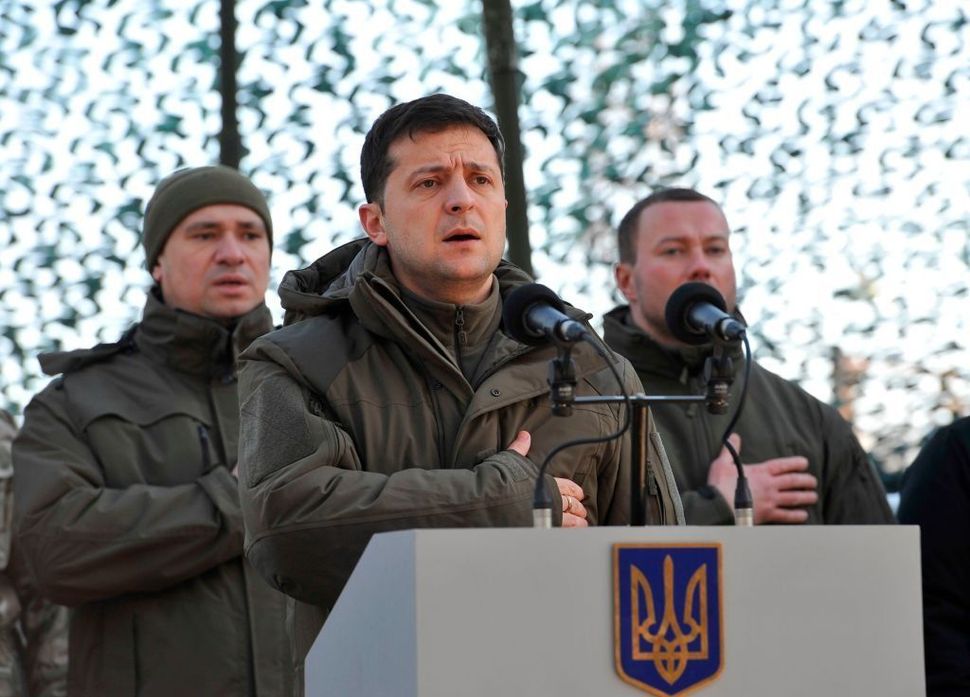 “I know this is not the time, but I have the biggest crush on this man,” one commenter admitted. The video in question? Ukrainian president and former comedian Volodymyr Zelenskyy, now stony-faced, speaking to the press amidst Russian attacks.

During times of great crisis — and we’ve had plenty in the past two years — it is human nature to reach out, grasping for community, a strong leader, a sense of stability, a…sexy older man. In the early days of the pandemic, people thirsted after Andrew Cuomo (and even, a little bit, Anthony Fauci). Somehow, “Cuomosexual” became a common term.

Now, as war accelerates in Ukraine, it’s Volodymyr Zelenskyy — aka Zaddy Zelenskyy. (“Zaddy,” for the blissfully unaware, is a sexualized term for an attractive, often powerful, older man.)

TikTok is full of videos featuring clips or photos of a somber-faced Zelenskyy making announcements or wearing a camo military vest and setting them to dramatic music. On Twitter, older videos of Zelenskyy’s time on Ukraine’s televised celebrity dance competition are making the rounds, and even the Ukrainian president’s fedora and pinstripe suit cannot slake the public thirst.

The comment sections on every platform are the same: half declare him a hero, the other half claim him as their future husband.

“Who knew that ‘strong president’ was a kink,” wrote one commenter. “Ok he’s like really hot though or is it just me??” asked another, which got nearly 40 replies of enthusiastic agreement.

After Cuomo and Fauci, Zaddy Zelenskyy felt inevitable. But there’s pushback; Cuomo resigned in shame amidst accusations of sexual harrassment. Even before then, everyone seemed to come to their senses, realizing that publicly lusting after a craggy-faced governor who was simply doing the bare minimum to stop a raging pandemic was pretty cringe. Have we learned nothing?

There’s no evidence that Zelenskyy is going to turn out to have some damaging secret, but it’s still a bad look to drool over a world leader; in fact, this world conflict seems to have begun, in part, because one single world leader — Putin — got an inflated sense of self and constructed his own, ego-boosting version of reality with the help of a circle of yes-men.

Zelenskyy himself understands the dangers of focusing too much on a leader instead of actual policies; when he took office, he begged people not to put him on a pedestal, encouraging them to keep their focus on the country’s future. “I don’t want my portraits to hang in your offices, because the president is not an icon or an idol,” he said in his inauguration speech. “Hang pictures of your children there and look them in the eyes before every decision.”

The thirsty comments are well-intentioned, and there’s a natural attraction to the charisma that’s inherent in any leader stepping up to the plate during disaster. My impression is that the people fawning over Zelenskyy are trying to be encouraging, even if the compliments seem to have lost sight of the fact that he’s in an active war zone. Plus, Zelenskyy was an actor and comedian, so he knows how to work a camera, and there’s copious video footage of him to work with, even before he entered politics.

But they also detract from the gravity of war. Zelenskyy’s sexy “alpha male” qualities are embodied in standing up to Putin waging war on his country, not pleasing the commenters going wild. His selfie videos, however made-for-social-media they seem, are to prove to the public that he’s still alive. And focusing exclusively on Zelenskyy means losing sight of millions of other people in Ukraine also bravely standing up to the Russians and suffering the fallout from war.

Online today, tweets about cats are next to photos of babies in bomb shelters, and clips of bombs falling on Kyiv are replaced by TikTokers twerking. It’s easy to blur the lines, so it feels just as appropriate to pine after a world leader as an influencer — maybe it even feels more moral or elevated to choose the heroic president over the Hollywood heartthrob or pop star.

Yet when we’re cheering on a man trying to save his country from the powerful Russian military exactly the same way we would if we were watching a basketball game, we’ve lost sight of reality. I promise you, there’s better ways to support Ukraine with real resources or money, not clout. Influencers may be flattered by thirsty fans, but Zelenskyy doesn’t care if you think he’s hot — he just wants to be admitted into the European Union.

Online, Zelenskyy has become a sex symbol. It’s getting weird.