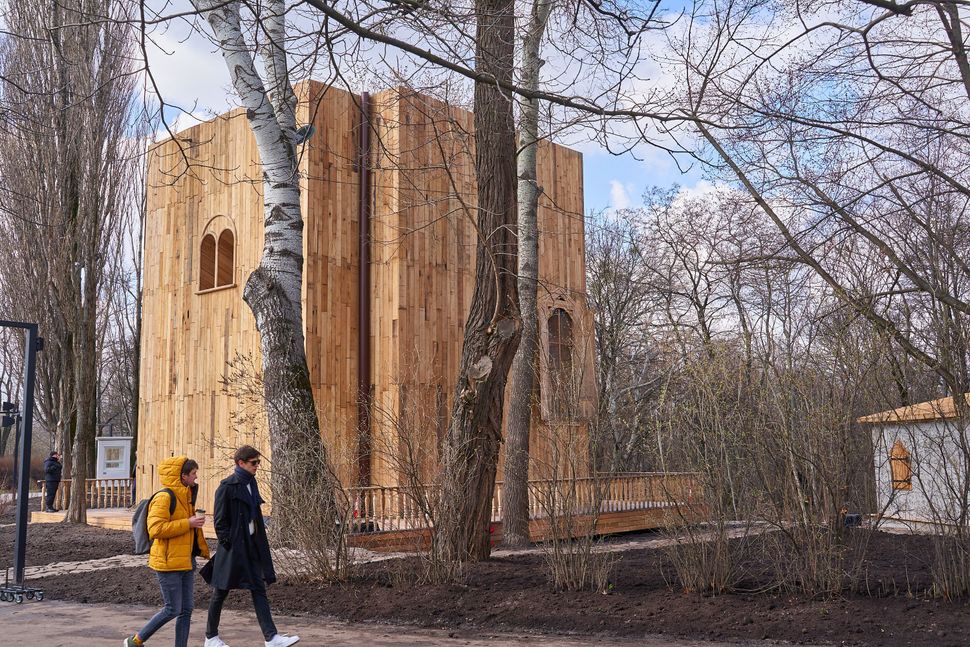 When closed, the synagogue looks like a tall, narrow book. Image by Manuel Herz Architects

In May, the Forward spoke to architect Manuel Herz about a new synagogue he’d designed at the site of Babyn Yar (for years commonly referred to as Babi Yar), where SS officers and Ukrainian allies murdered 34,000 Jews in 1941. Herz modeled the structure after the colorful wooden synagogues that once dotted the Pale of Settlement, and decorated the ceiling with flowers representing the constellations visible on the nights of the massacres. He hoped that international visitors and the local Jewish community would interact with it on a daily basis.

On Tuesday, Russian bombs hit Babyn Yar, striking a television broadcast tower and killing at least five people. While it remains unclear if and how much the memorials at the site have been damaged, Ukrainian president Volodymyr Zelenskyy referenced the site’s Jewish history in his response. On Twitter, he wrote, “What is the point of saying ‘never again’ for 80 years, if the world stays silent when a bomb drops on the same site of Babyn Yar?”

Herz shared his initial reactions to the bombing with the Forward. 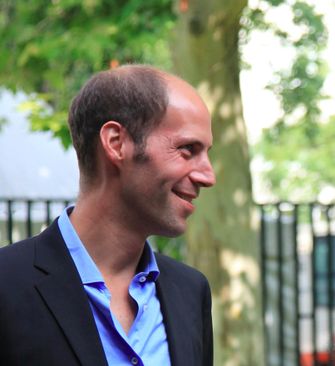 As I am writing this, Babyn Yar is being attacked. The site of one of the worst massacres of the 20th century, where in 1941 tens of thousands of people were killed within a few days at the hands of the Nazis, has again become a site of war and killing. Five people died when a TV tower and a sports center located on the grounds of Babyn Yar, on the outskirts of Kiev, were hit. Beyond the incredibly tragic loss of life, it represents a destruction of history, and a violation of all the over 33,000 victims who died there 80 years ago. Within a horrendous war, the looming destruction of a memorial site of this scale and meaning is another horrific chapter debasing our humanity.

When, in October 2020, I was commissioned to design a synagogue for the site of Babyn Yar, I was extremely moved by the honor to build on this territory, one of the “ground zeros” of European (or even world) history, and of the responsibility that this imbued on me as an architect. Of course, one aim was to shape a building which commemorates the past. But even more, I wanted to design a building in which Jews can pray, but also one that is open to visitors and citizens of Kiev.

With its fragile wooden construction, transformative quality and colorful painting making it different from any other kind of “monumental” and commemorative architecture known to me, it was to be a place in which, together, they could celebrate the beauty of life. 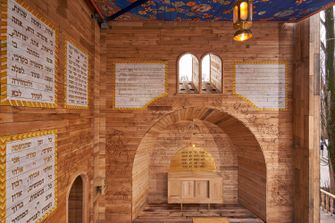 One of the blessings inscribed on the synagogue’s walls is a prayer to turn nightmares into good dreams. Image by Manuel Herz

The period of design and construction, taking a mere six months, was as intense as the practice of architecture can get. During this time, I got to know an astounding and deeply committed group of people in Kiev that have since become close friends. Within only seven days of Russian invasion into Ukraine, they have been drawn into a bitter war; many of them have become refugees.

Only a few months after its inaugurations the synagogue is caught up in a war, which only celebrates death. What is the point of commemorating history, if the lessons to be learned are forgotten and ignored so easily? It leaves me speechless, numb and powerless. 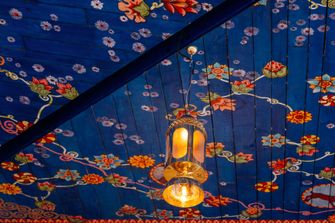 The flowers painted on the synagogue ceiling represent the constellations that were visible on the first night of the massacre. Image by Manuel Herz Architects

Compared to other commemorative architecture that is mostly built of stone and concrete, the fragility of the wooden synagogue means that it must be cared for every day. This daily care, and its fragility, is precisely what represents actual commemoration. The synagogue needs its community, its audience and its visitors. With the site having become a war zone, it has been robbed of this community. I pray for the people of Kiev, and of Ukraine, that the savagery of the war ends as fast as possible, and I hope that the synagogue can eventually regain its community, so that the lessons of fragility are not drowned out by the cruel noise of the war.

Manuel Herz is an architect based in Switzerland.