A Yiddish performance so versatile, it spans from ‘Mauthausen’ to Elvis Presley 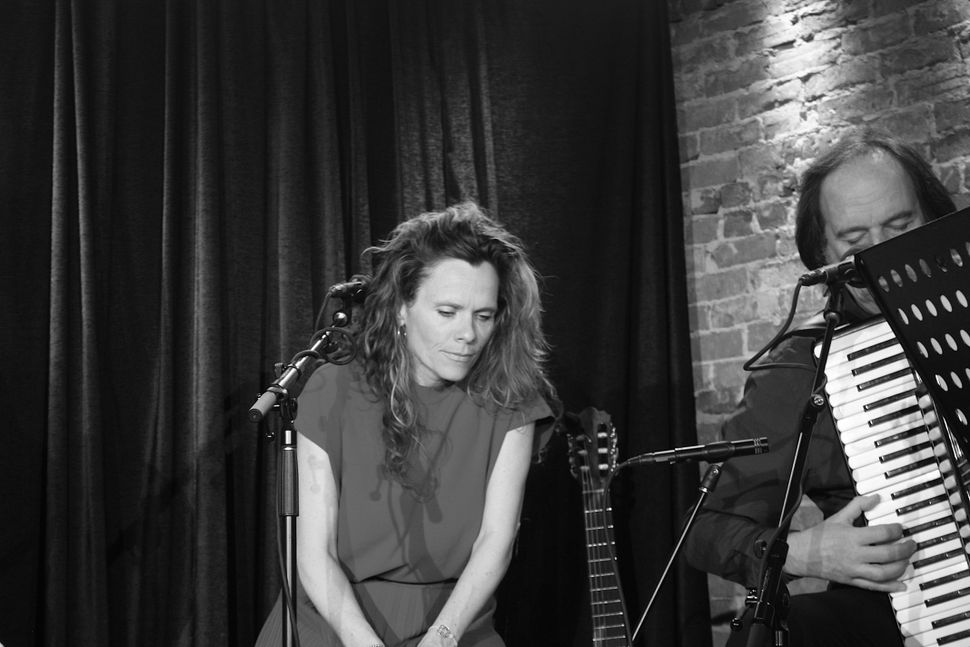 Balladeer: Niki Jacobs and her ensemble recently toured this program around the Northeast U.S. A final stop is scheduled at the Edlavitch DCJCC Wednesday, March 23, at 7:30 p.m., before a monthlong tour of Europe in April. The group will return to the U.S. in May for a west coast tour, with California stops including Berkeley, San Diego and Los Angeles. By Seth Rogovoy

With her latest project, “The Ballad of Mauthausen,” Dutch Yiddish singer Niki Jacobs has pulled off the seemingly impossible: She has recast the song cycle of the same name by Greek composer Mikis Theodorakis and poet Iakovos Kambanellis as an avant-garde Yiddish cantata that remains true to the spirit of the original while extracting new depth and meaning – linguistically and musically – from the nearly 60-year-old composition.

Friday, March 18, at Caffe Lena, the venerable coffeehouse and music spot in Saratoga Springs, New York, a packed house sat spellbound until the end of the concert – which included some old Yiddish favorites as well as a surprising American pop tune rendered in Yiddish (more on that in a moment).

The concert kicked off with a dreamy original composition by Ro Krauss, the ensemble’s violinist, who set the tone for the evening with a haunting ostinato before Jacobs joined in with a wordless melody – a modern-day nigun, perhaps — loosely based on the Yiddish standard “Mayn rue platz.” Piece by piece, the musicians joined in, layering their instruments in a kind of fractured jazz-meets-chamber music setting, with accordionist Peter van Os sailing above cellist Emile Visser and exchanging licks with trumpeter Ben Holmes.

The group followed this with a dark rendition of the already-dark Yiddish lullaby, “Makh tsu di eygelekh,” its forlorn, delicate melody featuring Jacobs’s organic, crystalline vocals. “Huljet, huljet,” based on a poem by Avrom Reisen, was a showcase of group interplay, featuring three-way harmony vocals that sounded like heavenly angels before Visser’s cello turned the quiet, sad melody into a frenzy of discordant alarms, trading the inherent beauty for chaos and violence in a kind of acoustic cello heavy metal, forecasting an incoming storm.

That storm arrived in the evening’s centerpiece, the four-section “Ballad of Mauthausen,” based on Kambanellis’s original poems. When originally presented by composer Theodorakis in 1965, the poems were rendered in Greek, Hebrew and German. Jacobs worked with Willy Brill to translate all the lyrics into Yiddish – the language that would have been spoken by the vast majority of Jews at Mauthausen, where Kambanellis himself had been imprisoned.

Mauthausen was originally constructed by the Nazis in Austria as a slave labor camp for “undesirables” – political dissidents, homosexuals, artists, intellectuals and (mostly Soviet) prisoners of war. Eventually, mobile gas chambers were rolled into the camp along with trainloads of Jews. 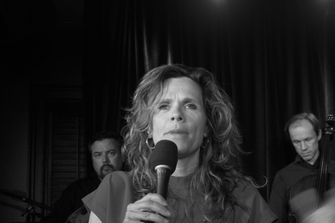 A Project of Unusual Ambition: With “The Ballad of Mauthausen,” Dutch Yiddish singer Niki Jacobs has recast the song cycle of the same name by Greek composer Mikis Theodorakis and poet Iakovos Kambanellis as an avant-garde Yiddish cantata. By Seth Rogovoy

Krauss began “Antonis” — the first and probably best-known number of the song cycle – with a quiet violin solo introducing the cadences of what was to come. Jacobs joined in, her stately, gorgeous vocals recounting the tale of a Greek prisoner who comes to the aid of a Jewish friend struggling under an impossible workload, a contemporary twist on the myth of Sisyphus.

Krauss’s sharp, angular chords provided a harmonic bed and a broken, rhythmic march on top of which Jacobs and the other musicians illustrated the dramatic story. “Der Antlofener,” in contrast, told of an escapee who sought refuge, aid, and comfort but who was turned away at every door, only to be recaptured by the SS and condemned to the ultimate punishment.

Behind Jacobs’s mournful vocals, van Os’s accordion laid down a drone while Krauss and Visser attacked their instruments in unconventional methods, with sharp percussive sounds and notes stretched and elongated up and down the strings alongside Jacobs’s own superhuman elastic vocals.

“Wen di milchome iz farbai” was sung from the point of view of a woman fending off death through the power of love. Introducing some lightness into the song cycle, Jacobs’s voice and Visser’s cello danced together, a musical representation of the reunion of two lovers. The song cycle concluded with “Sjir-hasjirim,” to which Jacobs added delicate fingerpicking on acoustic guitar. Jacobs sang pleadingly from the point of view of a prisoner who searches everywhere for his lost love, quoting Song of Songs 3:3, “Have you seen the one I love?” while intoning the names of other death camps, including Dachau and Auschwitz.

After a musical reprise restating some of the Mauthausen themes, Jacobs offered a variety pack of Yiddish songs, including a distinctive version of “Bublitshki,” about a bagel salesman, which began a cappella before breaking into a jazzy, Yiddish-swing arrangement. While “Blondzjendiker fremder” may not have been familiar to fans of Yiddish music, it was recognizable to roots-music aficionados as a Yiddish version of the traditional American folk song, “The Wayfaring Stranger” – an apt choice, as the song has roots as a German-language hymn and a Civil War ballad. The concert closer, “Lib mikh tsartlekh,” also boasts musical roots as a Civil War ballad, but it is known best as the Elvis Presley hit, “Love Me Tender.”

Jacobs’s concert and her version of Mauthausen were prime examples of how Yiddish music continues to thrive as a contemporary genre with a broad expanse and an ability to encompass and give new meaning to nontraditional source material.

Until now, the songs from the Mauthausen cycle were owned by Theodorakis’s go-to vocalist, the estimable Maria Farantouri. Now, at least in Yiddish, and after having made them entirely her own, Jacobs can lay equal claim to them.

(Niki Jacobs’s Mauthausen song cycle and other Yiddish numbers, including a Yiddish translation of “Brothers in Arms” by Dire Straits, are available on a CD called “The Ballad of Mauthausen.”)

Jacobs and her ensemble recently toured this program around the Northeast U.S. A final stop is scheduled at the Edlavitch DCJCC Wednesday, March 23, at 7:30 p.m., before a monthlong tour of Europe in April. The group will return to the U.S. in May for a west coast tour, with California stops including Berkeley, San Diego and Los Angeles.

Seth Rogovoy is a contributing editor at the Forward and an avid fan of the music of Mikis Theodorakis.

A Yiddish performance so versatile, it spans from ‘Mauthausen’ to Elvis Presley