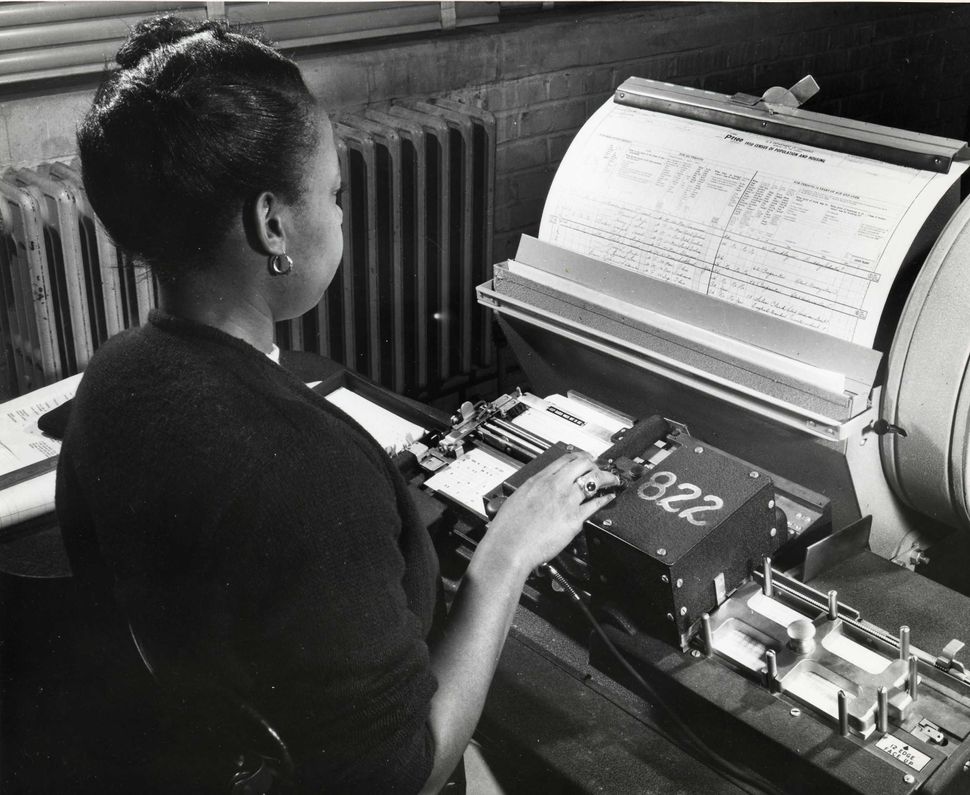 Data Input: A woman records data about U.S. population and housing for the 1950 census. By Wikimedia Commons

Jewish genealogists and researchers are eagerly awaiting midnight April 1, when the U.S. 1950 decennial census will be made public by the National Archives and Records Administration.

Seventy-two years to the day the enumeration began, the entries of the 151 million Americans tallied will be made accessible online. The data will give a snapshot of American life in the year that “Guys and Dolls” opened on Broadway, and the Korean War was declared. For the first time, war babies and older baby boomers will be able to find themselves on the census rolls.

This census is of special interest to American Jews, showing life in the years after the Holocaust and the establishment of the state of Israel. It captures recently arrived Jewish refugees from Europe’s displaced persons camps settling into their new country, while upwardly mobile Jews were moving to the suburbs and populating new Jewish centers in places like California and Florida. 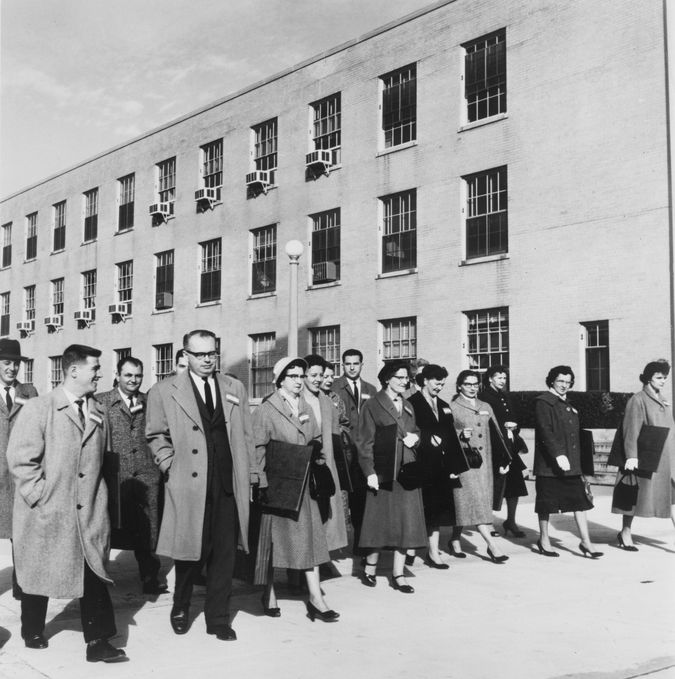 On the Move: In 1950, census workers head out in full force. By Getty Images

The census is a valuable tool for genealogists, offering the name, age, address, and birthplace of every American at a moment in time. But more than listing employment, marital and immigrant statuses, it shows each individual in the context of his or her family and community.

“You can see who is in the household if the family was trying to make extra money by having a room for a boarder, or what extended family members came to stay,” said J.D. Arden, a genealogy librarian at the Center for Jewish History. “Was it an immigrant neighborhood? Was it a Jewish neighborhood?”

Unlike other genealogical records like birth and death certificates and immigration documents, the census shows people in their everyday lives — except for Jewish Americans in 1950 because that year’s census started on Passover.

When mid-century Jewish Americans opened the door to let in the Prophet Elijah during their seder, they may have been greeted by a census taker with pen and paper in hand. Yes, the 143,000 government employees worked nights and weekends in their quest to count every head.

“My father would have thrown them out,” Mona Freedman Morris, founder of the Jewish Genealogical Society of Palm Beach, said. Orthodox households would have refused to dictate answers to a worker to jot down on the holiday. Freedman Morris, who was six in 1950, plans to compare the dates of her family’s census entries to their neighbors. If the enumerator had to come back later to enter her family’s details, she thinks it’s because they refused to participate on a holiday. For less observant Jews, it may mean that they were out, having their four cups of wine and matzoh elsewhere. 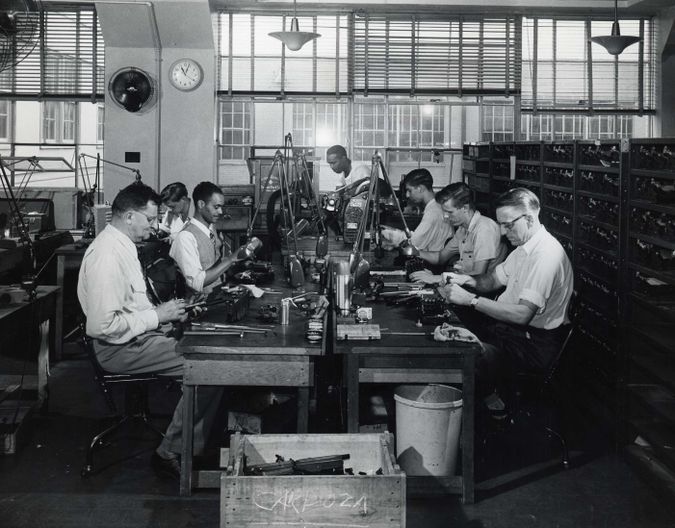 Of course, households were still counted after Jews put their Haggadahs away and returned to munching on leavened bread. The census bureau aimed to cover all urban areas during the first two weeks of April. An ambitious goal considering the U.S. population had grown 14.5 percent since the 1940 census. But even after reducing the number of questions from the previous census, the agency fell short.

Still, many Jewish households would have been tallied during the week following Passover. Answers to the census question “How many hours did he work last week?” could reveal if the respondent took days off for Passover, which could give insight into theirreligious observance and economic position.

If your relatives were of the mindset and the means to spend Passover at one of the Catskills resorts or Miami Beach hotels that competed with catered seders and headlining cantors, that could also show up in the count. In 1950, the census recorded travelers at hotels and U.S. citizens abroad for the first time. 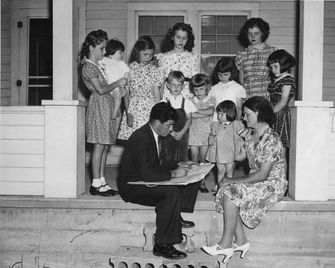 A True Accounting A census worker sits on the front porch of a family home, taking down information By Getty Images

In 1950, some members of the Jewish community might have been hesitant to participate in the census.

“The intent of the U.S. Census is benevolent,” explained Arden. “We count our citizens, so they are fairly represented and receive services and representation.” However, for Holocaust survivors, the count might have brought up memories of the minority census of Nazi Germany.

Further, Arden said, older East European Jewish immigrants might have experienced the 1897 Russian Imperial census that was used to control the Jewish population and conscript Jews into the Imperial army. And present on the mind of American Jews was the McCarthy-era government targeting of Jews on suspicion of being communists.

But this was a census list, not a blacklist. Respondents should answer questions “freely and without reservation; for all census data are confidential,” The American Jewish World felt the need to tell its readers on March 31, 1950. “Not even the president himself, nor the Internal Revenue Department, nor the FBI may see the question form.”

Freedman Morris doesn’t believe these fears led to Jews being undercounted. “Many Jewish people couldn’t vote in the countries they came from. So voting was a big deal.” Synagogues and unions, she said, encouraged their members to participate in the census. 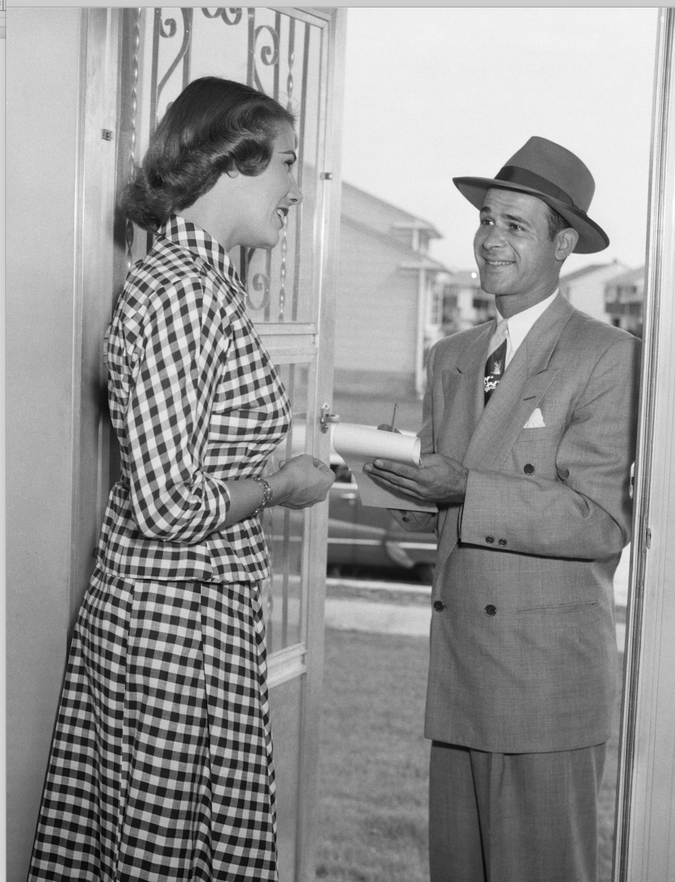 Probably Not Elijah: A woman greets a census taker at her door. By Getty Images

For some Jewish immigrants, the census was an opportunity to feel part of their new country. While mainstream newspapers ran photos of President Truman answering census questions, the Jewish press featured Albert Einstein. The caption in The Jewish News of Northern California called the German-born scientist “just ‘another American’ when he took the time out of his busy day to answer various census questions.”

Leading up to the release, Freedman Morris held a Zoom workshop with her Palm Beach County group and an online class organized by the Heinz Center of History in Pittsburgh and the Jewish Genealogical Society of Pittsburgh. 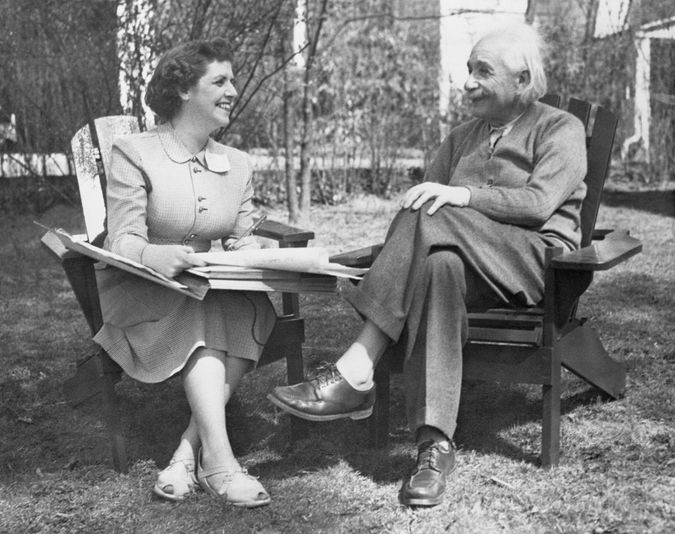 Freedman Morris taught participants how to find entries by location so they could research right away on April 1. The census will be released digitally but without a searchable name index. Ancestry.com will use a machine-learning algorithm to index entries, which tens of thousands of volunteers from FamilySearch.com will then review. The process to create a fully searchable database promises to be much faster than the four months it took in 2012 to index the 1940 census.

Mona Freedman Morris says that genealogy enthusiasts like her aren’t just interested in finding old relatives. She relayed that one participant in her Palm Beach County workshop said, “You can look up all the famous people and find out how much money they really made” — referring to the supplemental questions about household income asked to one out of five individuals. 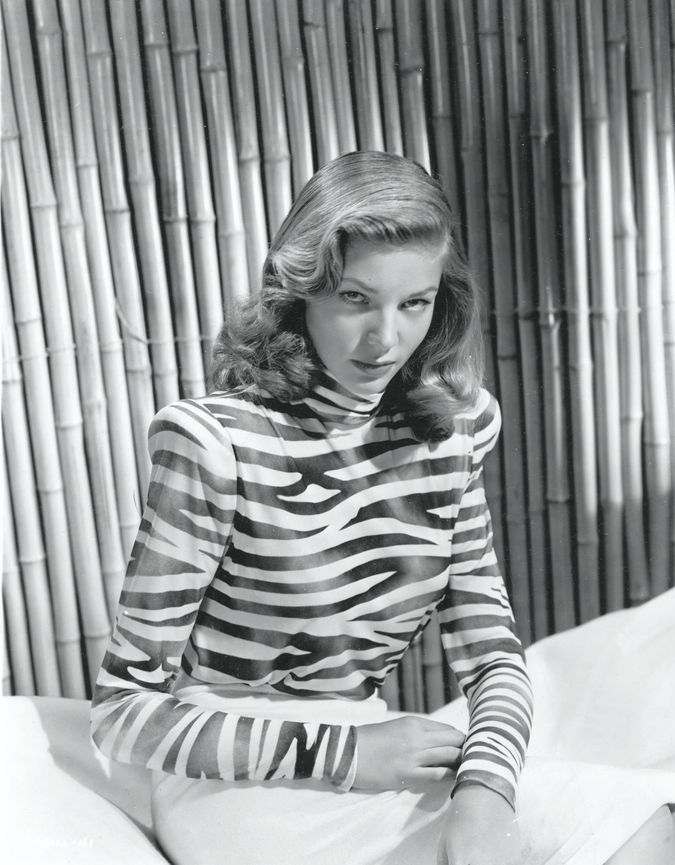 Everyone Is Counted: What might we learn about Lauren Bacall in the 1950 census? By Getty Images

So perhaps on April 1, we’ll find out how much Hollywood Star Lauren Bacall made in 1949, or how much money the family of a so-called self-made billionaire from Queens earned in rents and dividends. Freedman Morris is most excited about the income data, which is more detailed than past censuses. She’s less into the celebrity gossip than gaining a picture of how American Jews became more prosperous and educated in the postwar era. Though she warns, all the data are self-reported.

At the Center for Jewish History, Arden is prepared to help visitors search the census on April 1. He expects an uptick in the number of visits by scholars, journalists and amateur genealogists.

“People like to connect to their ancestors’ history by finding those details of which ship they came on, or finding the name on the census,” Arden said. “Even if people already know the information, there’s some emotional connection by seeing the name on that printed page.”

Helen Tannenbaum, a longtime volunteer at the Center for Jewish History and active member of the Central Synagogue genealogical group, has a specific interest in finding her toddler self in the census. “I want to see if they spelled my surname correctly,” she said.