A thriller from Mexico and a debut detective novel: The Jewish books you need to know this month 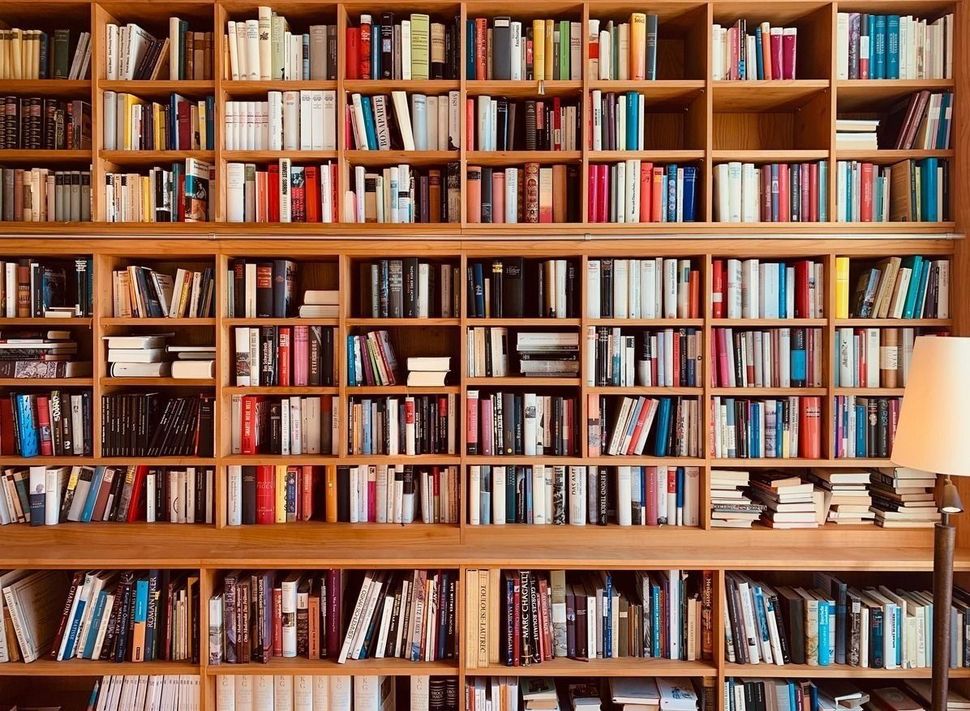 Welcome to your monthly tour of the Jewish literary landscape! I have four new titles to share and a special announcement — we just launched our Bookshop storefront, where you can shop the books recommended in this newsletter. I’ll be keeping the page updated with titles I’m loving, Forward Book Club picks, and other fun lists of recommended reads. If you click through and shop from our page, the Forward will earn a small commission; you can also use your purchase to support your favorite local bookstore. See you there!

This article originally ran in newsletter form. To sign up for Forward Reads and get book recommendations delivered to your inbox each month, click here. 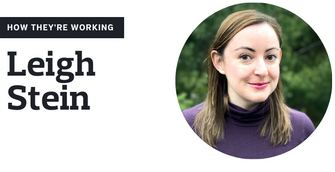 Leigh Stein spends a lot of time on the Internet. She has to, because she writes about it. With the publication of her novel “Self-Care,” a satire of the kind of girlboss feminism that often predominates online, she became the lampooner-in-chief of the wellness industry and its efforts to sell women a better state of mind.

But, as so many of us have found to our detriment, it’s pretty difficult to advance one’s life work while also constantly refreshing Instagram. I talked to Stein about what a writing life looks like when your subject happens to be the extremely addictive, energy-sapping behemoth that is the online world. Our conversation convinced me to turn off my phone on the weekend — maybe Stein will persuade you, too.

Her morning routine: I’m a big believer in the eat-the-frog productivity technique — meaning, do the thing you’re most likely to procrastinate on first. The frog is the thing you don’t want to eat, and that’s why you have to eat it first. If I don’t write in the morning, I’m never going to write the rest of the day because I’m going to be doing whatever other people want me to do.

The best-case scenario is if I turn off my phone and close all my tabs the night before, so that when I sit down at my computer I’m just looking at the document. I write before I check my email, before I check Twitter, before I turn on my phone.

On word counts: Before the pandemic, I spoke at a writing conference about the process of “Self Care,” which hadn’t come out yet. I said that I wrote this novel by setting a goal of 250 words a day, and a woman at the back of the room yelled out, “That’s a grocery list!” Like, wow, thanks a lot. But you can write a whole book that way. I find it more psychologically healthy to set a low goal and then exceed it than to set a high one and feel like I’m failing every day. I’m a productivity nerd, and I do track how much time I spend writing and how many words I write, just because it makes me feel good to compete against myself.

On tech breaks: I turn off my phone and my computer from Friday night until Saturday at sundown. It helps me so much, because I get all my ideas on Saturday. I don’t have this device to check whenever I’m bored or unsure what I’m supposed to do next, and it lets my mind wander. I think that’s what we’re really missing, opportunities to let our minds wander.

Then I turn my phone on and get all the notifications and my body freezes. That’s the thing about the internet — it’s on 24/7. Even when I’m asleep, people are emailing me, people are responding to my tweets. There’s no way to totally turn it off. You can just set your own breaks. 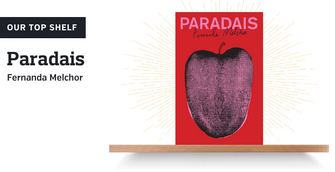 There’s not even one character to root for in this spare, cutting tale of social inequality and the terrible violence it breeds. The novel is set in a Mexican gated community, where a teenage boy named Polo works a dead-end job as a gardener. When he’s not running errands for the development’s entitled residents, Polo gets hammered with Franco, a pornography-obsessed boy living in the development with his wealthy grandparents. Polo hates Franco — most of the time, he calls him “fatboy” — and he’s repulsed by the boy’s obsessive fantasies about his married neighbor, Marián. But when Franco becomes fixated on breaking into Marián’s house to “seduce” her, Polo sees a plan that could benefit them both.

“Paradais” isn’t easy to read — even Melchor’s editor called it a “hypnotic, evil little book.” Instead of “relatable” characters or redemptive endings (if you think that break-in is going to go well, think again), the novel offers readers an audience with an author at the top of her craft. Melchor breaks pretty much every rule of conventional storytelling. She changes tense and sometimes perspective within sentences, which often go on for pages without a period. Paragraph breaks? Forget about it. Yet Melchor never let me get lost; instead, her prose whisked me along, keeping me immersed in Polo’s breathless, claustrophobic monologue.

Sinking readers so deeply into Polo’s mind, Melchor forces us to understand, if not empathize with, characters whose attitudes are abhorrent. And she makes us see how the boys’ circumstances — for Polo, childhood in an impoverished town controlled by cartels; for Franco, the fear and sterility that comes with a life of iron gates and tinted windows — make their actions inevitable. Melchor, who has spoken of how her Jewish ancestors found safe haven in Mexico yet still felt pressure to conceal their heritage, is supremely attuned to the violence and brutality an ostensibly paradisiacal environment can conceal. It’s not exactly a pleasure to spend 124 pages in her world; but it’s an experience I wouldn’t give up. 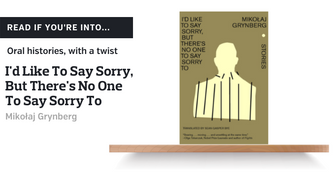 A photographer and psychologist by training, Mikołaj Grynberg is known for collections that pair studio portraits of Polish Jews with oral histories. In “I’d Like to Say Sorry,” a powerful first foray into fiction, he’s adapted those real histories into fictional vignettes, in which Jews and gentiles describe how the unresolved horror of the Holocaust colors daily life in modern Poland. Many of Grynberg’s subjects are second-generation survivors, whose parents’ unspoken trauma defined their upbringings. In “An Elegant Purse,” for example, a mother waits until she’s retired to divulge her Jewish heritage to her daughter, for fear of losing her career. In other stories, gentile families reluctantly confront their buried Jewish connections: When a grandmother in “Unnecessary Trouble” reveals on her deathbed that she’s Jewish, her antisemitic offspring are furious. “Grandma’s not getting enough oxygen,” one granddaughter concludes.

For American Jews, who enjoy comparative safety in wearing their identities publicly, Grynberg’s fiction debut is a sobering glimpse into a particularly difficult kind of diaspora life. For Grynberg, the book is a way of asserting belonging in a country that has tried to deny its Jewish history and its complicity in Jewish persecution. “I’m also a Jew, but I’m a Pole,” Grynberg said in an interview with Jewish Currents. “They say, ‘Go home!’ and I say, ‘I am home.’” 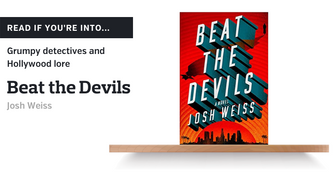 If you’re looking for a sunnier March read, I can propose … a detective novel set in an alternate universe in which Joe McCarthy becomes president and institutes a system of state-sponsored antisemitic persecution. Was it restful to envision what life would be like if the House Un-American Activities Committee had its own police force? Not exactly. Did I enjoy following Morris Baker — Holocaust survivor, homicide detective, and massive over-indulger of peach schnapps — as he cruises the smoggy Los Angeles highways and mutters to himself in Yiddish? Absolutely.

Our story begins when Morris arrives at the scene of a double murder with two very interesting victims: screenwriter John Huston and “up-and-coming” journalist Walter Cronkite, both of whom had risked their careers to speak out against the McCarthy government. The HUAC police warn Morris to leave the case to them. And as the lone Jewish detective on a squad that has embraced the new regime wholeheartedly (the first chapters alone are a primer on fifties-era antisemitic slang), Morris knows he’s better off keeping his head down. But when he pries a piece of paper out of Cronkite’s rigor-mortised hand and finds his own name written on it, he can’t resist investigating.

A debut novel from Josh Weiss, “Beat the Devils” delights in detective story tropes. The saloon shoot-outs, cryptic radio messages, grungy sunrises and ravishingly beautiful secret agents create a noir atmosphere redolent of Dashiell Hammett, only there’s a lot more Yiddish and a lot less casual misogyny. Yet the novel also confounds our expectations of a historical thriller, mixing real Hollywood lore with invented storylines. (Huston and Cronkite are far from the only American luminaries to get unceremoniously dispatched mid-career.) The world Weiss creates, in which the fight for Jewish acceptance and safety in America is never lost and never quite won, feels both far away and all too familiar. 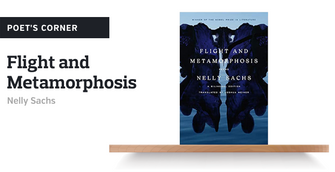 Awarded the Nobel Prize in 1966, German-Jewish writer Nelly Sachs is known chiefly for the poetry she wrote in the immediate wake of the Holocaust — especially in Germany, where she has become a symbol of the nation’s reconciliation with its past. But Joshua Weiner, translator of a new dual-language edition of Sachs’s collection “Flight and Metamorphosis,” argues that labeling Sachs a “Holocaust poet” is a reductive move, one that ignores her later and more complicated work.

By 1959, when this collection was first published, Sachs had matured as a poet, moving away from the blunt Holocaust imagery she used in her earlier work. (One of her most famous poems is titled, “O The Chimneys.”) At this point in her life, she was reading the Zohar and Martin Buber’s collections of Hasidic tales, texts that gave her, in Weiner’s words, a new “vocabulary for a spiritual exile.” She was also influenced by a new generation of Swedish modernist poets, whose work she translated to support herself after fleeing Berlin for Sweden. Sachs brings those influences to bear in writing about the many painful changes — metamorphoses — endured by refugees. The result is a rare collection rooted in one poet’s experience that seems to address our current reality, decades later. In one poem, Sachs writes, “A stranger always has / his homeland in his arms / like an orphan / for whom he may be seeking nothing / but a grave.” She could just as easily be speaking today. 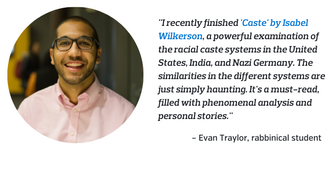 Image by Courtesy of Evan Traylor

A thriller from Mexico and a debut detective novel: The Jewish books you need to know this month