Nearly 50 years after ‘Annie Hall,’ the actress remains the epitome of awkward grace and elegant imperfection 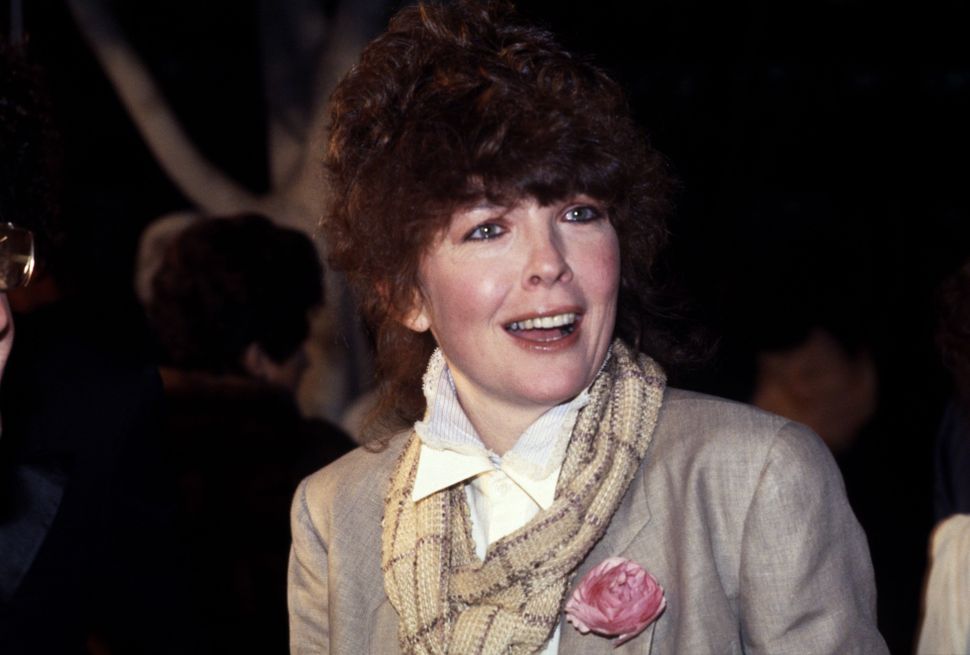 Outsider on the Inside: Even in her kookiest or most aggressive or vulnerable moments, Keaton is the outlier with a touch of class. By Getty Images

It’s hard to believe nearly 50 years have passed since Woody Allen’s “Annie Hall” hit the big screen, a cultural game-changer if ever there was one. Today, it’s admittedly dated and awash in self-referential comic clichés: for example, its depiction of a neurotic, intellectual New York Jew grappling with the meaning or non-meaning of virtually everything but, most pointedly, his doomed romance with the ur shiksa, Annie Hall.

Diane Keaton’s portrayal of the title role was the film’s high point and won her a much-deserved Oscar. The movie also earned awards for best picture, best director and best original screenplay for Allen, which he co-wrote with Marshall Brickman.

But it is Keaton’s performance that continues to resonate in its complexities and contradictions, a hallmark of her body of work. In each of Keaton’s many varied films — from the “Godfather” saga to “Looking for Mr. Goodbar” to “Reds” — she reflects the director’s particular aesthetic and sensibility, while simultaneously evoking a core of elegance regardless of genre or auteur’s vision. Even in her kookiest or most aggressive or vulnerable moments she is the outlier with a touch of class.

“Annie Hall” is arguably her most challenging role. After all it was written for her and inspired by who she was, at least as seen through Allen’s idealized lens. Her childhood nickname was “Annie” and her surname was Hall. Annie’s loose-fitting trousers, vests and floppy hats were Keaton’s sartorial stamp off-screen too. And her well-publicized relationship with Allen added yet another self-conscious meta element. Keaton was playing some version of herself while at the same time interpreting Annie as a fictional character.

The film is seen by many as a beacon of feminism, presenting a contemporary female protagonist who is imperfect: self-doubting and frequently unsure about what she wants or how to get it. Her fumbling and bumbling and oft-imitated “la-di-da” is charming and delightful. She’s refreshingly innocent and rooted in the upper middle class that is decidedly not innocent. Annie Hall is genuinely Annie Hall at the very moment she is also playing her.

In Keaton’s other performances in Allen films, the material is thinner, but here too Keaton projects unexpected crosscurrents that are consistently credible. In the 1973 sci-fi political parody, “Sleeper,” Keaton is an artist socialite of the future who is both zany and delicate. In Allen’s 1979 dramedy, “Manhattan,” she is every bit the self-assured intellectual journalist, though twisted this way and that on the romantic front.

In Allen’s Bergmanesque “Interiors,” she’s the imperious poet Renata, condescending to her husband (Richard Jordan) and unpleasantly distanced from her troubled family, jealous of her sister (Marybeth Hurt) and resentful of her father (E.G. Marshall). Still, we feel empathy and throughout, Keaton remains a true ensemble player, a generous spirit.

With other directors, more facets of her acting repertoire emerge. In Francis Ford Coppola’s “Godfather” saga, she is Michael Corleone’s passive wife Kay, a Baptist, non-Sicilian, who, as both WASP and woman, is the ultimate outsider. Yet we see her evolving and when she finally grasps the evil that surrounds her, we see how she has been subtly preparing for the moment. By the end of “Godfather II,” wholly repelled by her husband and the world he inhabits, she informs him in one of the most powerful onscreen outbursts that she has aborted his unborn son to avoid spawning another monster in Michael’s image. The shocking revelation is full of anguish, hatred and a hint of self-loathing.

In Warren Beatty’s three-hour epic “Reds,” Keaton switches gears to tackle the real life feminist-activist-journalist Louise Bryant, best known for her sympathetic coverage of the Bolsheviks during the 1917 Russian Revolution. To what degree her portrayal was accurate is almost beside the point. She created a character who straddled the fence between bourgeoisie values and bohemianism; monogamy and sexual liberation; political conviction and political play acting. The sense that she was a dilettante was never far from the surface. 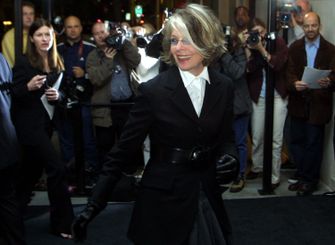 Black and White in Color: Diane Keaton’s career has spanned more than 50 years. By Getty Images

One of Keaton’s most impressive performances was in the role of Bessie in the 1996 indie “Marvin’s Room,” based on Scott McPherson’s off-Broadway play. Written by John Guare and directed by theater maven Jerry Zaks, the movie is a dark family drama with some elements of soap opera.

Yet there isn’t a false note in Keaton’s portrayal of a single, blue-collar woman who has spent the last 20 years of her life taking care of her ailing, bedridden father (Hume Cronyn) and her dotty aunt (Maureen Stapleton), and is now contending with her own medical, existential crisis. Diagnosed with leukemia, her only possible cure is a bone marrow transplant from her two nephews or her cosmetologist sister Lee (Meryl Streep) from whom she has been estranged for many years.

Keaton’s face conveys the beaten down expression of a long-term caregiver now facing her own demise. Rage roils beneath the surface, thanks in large measure to Lee’s ongoing indifference to their father. The predictable confrontation between the two sisters is explosive and features an added layer of humiliation and desperation on Bessie’s part while her emerging relationship with her abused, psychically damaged nephew (Leonardo DiCaprio) reveals another layer of her emotional depth.

In Alan Parker’s 1982 “Shoot the Moon,” Keaton stars alongside Albert Finney as the embattled Faith and George Dunlap. Like other fine divorce films (“Kramer vs. Kramer,” “War of the Roses,” “Marriage Story”), “Shoot the Moon” dramatizes the conflicting emotions experienced by the warring parties. In true contemporary fashion each has valid points, and it’s almost impossible to cast blame.

In illustrating the impact separation has on the entire family, as well as new partners, “Shoot the Moon” is spot-on realistic. Keaton subtly dramatizes how the tortured granularity of the decomposing family informs her life. Through most of the film Keaton’s character is largely a reactor, registering bewilderment and pain that occasionally bursts forth in a volcanic eruption. After she attends her father’s funeral, she spends the night with George, displaying an extreme vulnerability. Though Faith has moved on with a new boyfriend, she craves George’s comforting familiarity.

But her final moments are perhaps the most telling. After George crashes through Faith’s newly built tennis court, destroying it with his car, Faith’s new lover beats him to a pulp. He lies battered on the ground, his children clustered around him. He imploringly extends his hand to Faith, who peering down at him, remains silent, immobile, refusing to take it. Her mask-like expression suggests horror, pity and distaste, leaving little doubt that her love for him is gone. 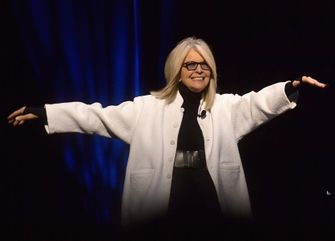 A Half-Century of Excellence: In 2018, Diane Keaton accepted a lifetime achievement award from the American Film Institute. By Getty Images

Diane Keaton’s career has spanned more than 50 years and many of her films have been spot-on topical; she appears to be the perpetual embodiment of an up-to-date woman, whether she’s flirting with sexual danger on the dating scene in Richard Brooks’ 1978 “Looking For Mr. Goodbar” or lusting after revenge as the dumped wife who joins forces with two other scorned spouses (Bette Midler and Goldie Hawn) in “The First Wives Club” (1996) or reveling in maternity-cum-yuppiedom in “Baby Boom”(1987).

More recently she’s played women, like herself, dealing with aging and the ravages of time. In the short-lived “5 Flights Up” (2014), a small, elegiac film, based on Jill Ciment’s haunting novel, “Heroic Measures,” Keaton gave a gentle, understated performance opposite Morgan Freeman. She played Ruth Carver, one-half of a Brooklyn-based couple who are trying to sell their beloved walk-up apartment where they’ve lived for the 40 years of their marriage.

But Keaton really showed her acting chops in “Something’s Gotta Give,” Nancy Meyers’ 2003 brilliant romantic comedy co-starring Jack Nicholson. He and Keaton are terrific sparring partners and Keaton illustrates what a great comic actress she is, a talent that she first revealed in “Annie Hall.”

Like her onscreen alter-ego in Allen’s film, here too Keaton plays some satirized version of herself, as does Nicholson; or, to be more precise, they play exaggerated images of themselves as they’ve come to be perceived by the public.

Nicholson is the 63-year-old multimillionaire entrepreneur Harry Sanborn, creator of Drive By Records, a mega rap company. He’s a playboy who never dates a woman over 30. She’s the 55-year-old Broadway playwright Erica Barry, a woman we assume is sexually experienced (a divorcee, a mother), but who is nevertheless prim, proper and spinsterish.

Predictably enough, they fall in love. But in Meyers’ present-day fairy tale, they also bond as older people facing their own growing limitations. Like Annie, Erica is an embodiment of charm while also being high-strung and neurotic. In the film’s most iconic scene, Harry inadvertently barges in on Erica who is stark naked. She screams, she squeals, she jumps up and down, while attempting to cover her private parts to no avail. It is one of the most hilarious laugh-out-loud movie snippets ever and, throughout, Keaton delivers her best performance since “Annie Hall.”

In 2017, Keaton won a Lifetime Achievement Award from the American Film Institute where she was the coolest of the cool. Whatever else one might feel about Woody Allen, audiences should be grateful that he introduced her to the world.