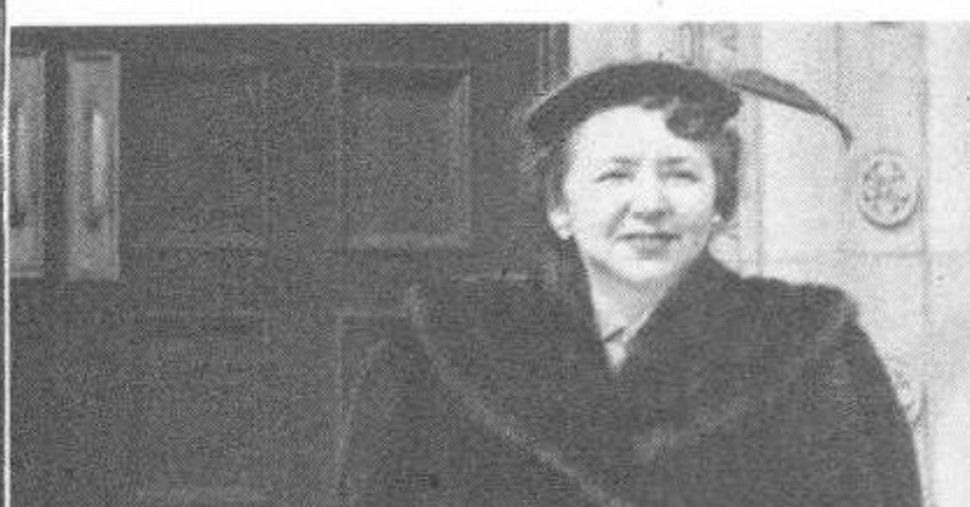 “Mrs. Lavin coming out of shul in fur,” 1952. Courtesy of The Sentinel archives

“While the Easter Parade on Sunday was a complete failure owing to the inclement weather, the Passover Parade on Saturday was a huge success.”

So, in April, 1906, declared The Hebrew Standard, a New York Jewish periodical. The paper went on to describe the scene on Grand Street, home of the Parade, writing that it “was jammed and the ladies outvied each other in their dresses and display of diamonds.” 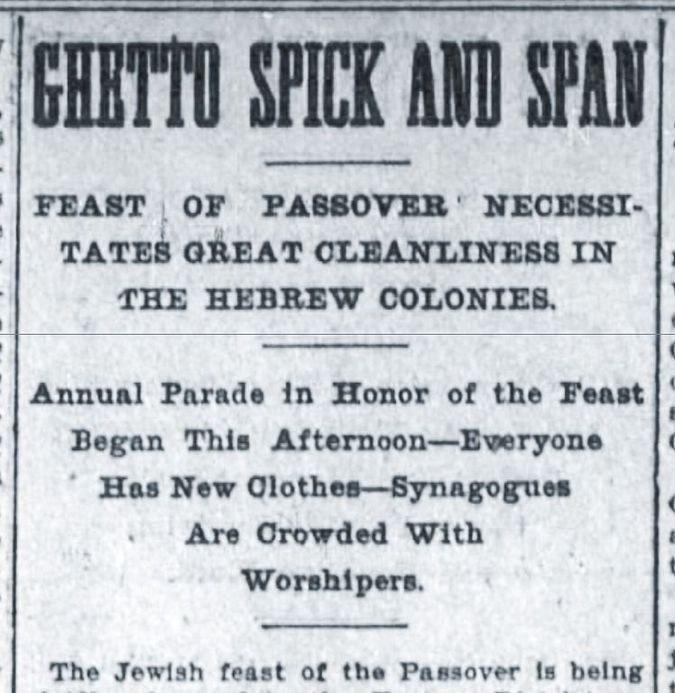 As other journals of the time confirm, between 1901 and 1918 the Jewish community of New York City annually gathered on the Lower East Side for a fashion spectacle and celebration that came to be known as the Passover Parade.

Yet this early 20th-century extravaganza, which likely began with crowds pouring out of synagogues in their holiday best, is nowhere to be found in the history books.

“The Most Beautiful Pesach Ever Since the District Became Jewish,” exclaimed the front-page Forverts headline of a piece about this holiday spectacle in April 1902, which noted that hundreds of Americans hit the streets to observe “the spruced-up masses.”

That same year, The Brooklyn Times, a daily New York paper, described the big business done by clothing and dry goods stores in the run-up to Passover and the Parade. Jewish charities, the article noted, helped “purchase new outfits for the deserving poor, who were barely able to earn enough money to feed themselves.” The paper reported that the Parade began at 4 in the afternoon, and “The Ghetto was lively with the bright costumes of men, women, and children.”

Apparently, the Parade served as a kind of matchmaking event, in addition to a chance for the Jewish community to show off its finery. A 1910 piece from the New York World explained that shadchans, or matchmakers, attended in great numbers and “gleefully rubbed their hands” — because, as the paper noted, among the parade’s participants were “many pretty girls and prosperous bachelors.”

Some accounts suggest that the Passover Parade was even more glamorous than its famous counterpart, the Easter Parade. The American Israelite of Cincinnati, Ohio, reported that 1904’s parade was “ever more gorgeous than that seen in the city’s chief holiday promenade. It was estimated that the diamonds worn in Grand Street… were worth hundreds of thousands of dollars.” 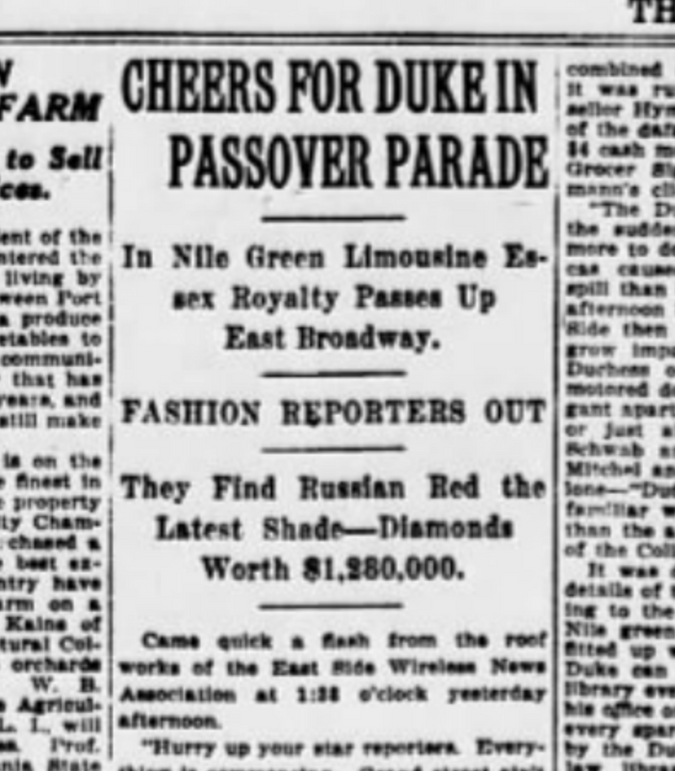 A clipping from The Sun’s 1918 report on the Passover Parade. Courtesy of The Sun archives

The Passover Parade was not without its detractors, some of whom believed that the emphasis on new clothing and jewelry was unseemly for the Jews. Leo Wise, editor of The American Israelite, acknowledged that only grudgingly had he reprinted a report of the parade. “It turned out just as I had expected,” he wrote. “The public prints were full of the manner in which the Passover was celebrated by the Jews. They had outlandish pictures of Jews… and outlandish statements about how Passover is observed.”

Wise was particularly irked by the $5,000 diamond necklace worn by Barbara Porges, wife of the prominent former alderman, Max Porges — a gift from her husband commemorating her campaign work on his behalf. (Barbara Porges, became one of the leading female political figures in New York City in her own right.)

Yet to some, the Parade also demonstrated that immigrants had become distanced from their Jewish roots.

In “Fighting to Become Americans: Assimilation and the Trouble between Jewish Women and Jewish Men,” Riv-Ellen Prell writes that Jewish immigrant women were ridiculed by Jews and non-Jews alike for attempting to copy Fifth Avenue fashions. Prell quotes the 20th-century Yiddish writer and humorist Israel Zevin, whose pen name was Tashrak, expressing his disapproval of this trend: “It is awful what poor taste most Jewish girls have. Consider the garish colors you can see on a Saturday or holiday on Jewish streets.”

And yet, the Passover Parade itself resulted in greater American acceptance of the Jewish immigrant community.

In “The Politics and Public Culture of American Jews,” Arthur Aryeh Goren explains that during the early 20th century, the New York Jewish community engaged in new forms of “ethnic pageantry” — events that were reported widely by general and Jewish papers and “constituted the building blocks of the public culture of American Jews.” The Passover Parade was only one example. In another, 100,000 Jews attended the 1905 funeral of the major Yiddish novelist known as Shomer. That same year, 200,000 Jews participated in a City protest against pogroms in Russia. In celebration and mourning alike, immigrant Jews used these gatherings to help establish their identity in their new country.

And the parade provided an opportunity for individuals to craft their public identities, too. In 1917 Frank Ward O’Malley of The Sun lamented that it was hard to observe the details of the Passover garb of the powerful law clerk Joe Levy, whom he referred to as the “Duke of Essex Street.” What was the issue? “The interior of his Nile green limousine… has been fitted up with book shelves so that the Duke can be surrounded with his law library even when motoring to and from his office.” If you wanted to make a name for yourself in New York, an outlandish parade presence was one way to do it.

Was the parade a party for immigrant Jews aspiring to be real Americans? A publicity stunt that gave a platform to up-and-coming Jewish political figures? An advertising tool sponsored by the fashion or jewelry industries? Just a Jewish version of the Easter Parade? All of the above?

Or perhaps it was really as simple as it seemed: a chance for new immigrants to show off their holiday best, and have some fun.

Rabbi Yael Buechler is the founder of MatzaPajamas.com.