‘The Levys of Monticello’ focuses on a Sephardic clan who, like the country’s 3rd president, enslaved people Steven Pressman’s new documentary focuses on a Philadelphia family that owned Monticello from 1834 to 1923. Photo by Menemsha Films

The exquisite neoclassical home that Thomas Jefferson built in the foothills of Virginia’s Blue Ridge Mountains has become the locus of complex and evolving understandings of American history.

Monticello and its collections have long illuminated the third U.S. president’s architectural genius, inventiveness, and predilections for both European style and American arcana.

In recent decades, historians have turned their attention to the enslaved Black population that made the 18th- and 19th-century plantation function. Its Mulberry Row dwellings and artifacts have been preserved and exhibited, its oral histories collected. The saga of the enslaved Hemings family — and of Sally Hemings, with whom Jefferson fathered several children — has become more central to the site’s narrative. 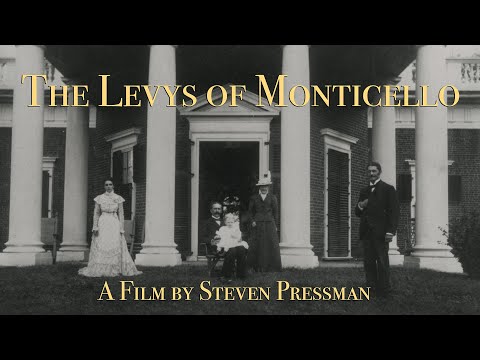 But in the course of my visits and reporting on Monticello in the 1990s, I never heard of the Levy family, a Sephardic Jewish clan from Philadelphia that owned the estate from 1834 to 1923 and was integral to its preservation. Steven Pressman’s new documentary, The Levys of Monticello, remedies that deficiency.

The 71-minute film, now making the festival rounds, is straightforward, even staid, in its approach. Like the celebrated documentaries of Ken Burns and Lynn Novick, it blends talking heads with archival and contemporary images, as well as actors reading excerpts from historical documents.

Monticello is first glimpsed from the air, iconic and serene, then in closeup, mirroring the director’s intent to drill down into its history. The narrative focuses on the efforts of the Levys to restore Monticello to its former glory, despite antisemitic currents that persist to this day. The family were admirers of Jefferson’s attachment to religious liberty. But, like him, they employed enslaved workers, the very paradox that has bedeviled Jefferson’s reputation.

Pressman has previously directed two Holocaust-related documentaries, Holy Silence and 50 Children: The Rescue Mission of Mr. and Mrs. Kraus. He draws the essentials of this distinctively American story from Marc Leepson’s Saving Monticello: The Levy Family’s Epic Quest to Rescue the House that Jefferson Built and Melvin I. Urofsky’s The Levy Family and Monticello, 1834-1923: Saving Thomas Jefferson’s House.

Both Leepson and Urofsky offer pithy commentary here, as does Monticello’s longtime senior curator, Susan Stein. Another key source is Niya Bates, an expert on the former plantation’s enslaved community. Jonathan Sarna, a professor of American Jewish history at Brandeis, situates the story in a broader context. Also appearing in the film are two Levy descendants, a Black descendant of an estate gatekeeper and Daniel P. Jordan, former president of the Thomas Jefferson Foundation, which owns Monticello.

Pressman’s principal research contribution, he said in a post-screening conversation at the Philadelphia Jewish Film Festival in mid-November, was to fill in the story of Uriah Phillips Levy’s ties to slavery. Levy, after buying the home in 1834, enslaved as many as 20 people. (Jefferson enslaved up to about 140 at any one time.) When the Civil War broke out, Levy, a naval veteran of the War of 1812, chose the Union side. After his death in 1862, the Confederacy confiscated Monticello, precipitating years of legal wrangling.

A fifth-generation American with an ancestor who fought in the American Revolution, Levy was a pioneering and controversial figure even before Monticello. In the U.S. Navy, he was a staunch opponent of flogging and helped end the practice.

Though he eventually became the first Jewish commodore — and today the U.S. Naval Academy’s Jewish chapel is named for him — he was court-martialed six times, twice ousted from the Navy, and twice reinstated. Being Jewish, it seems, made him a target, but the film fails to detail his alleged offenses, leaving his naval career somewhat mysterious. (Pressman later said that Levy once killed a man who had insulted him in a duel in New Jersey but was acquitted on grounds of self-defense.)

Levy tried to leave the estate to the U.S. government as an agricultural school for the orphans of Navy warrant officers. After the protracted legal battle, it ended up, in 1879, in the possession of his nephew, Jefferson Monroe Levy. A three-term New York congressman, he spent lavishly to acquire more acreage and to repair and restore the home.

Not everyone was appreciative. Maud Littleton, the wife of another New York congressman, was among those decrying Levy’s ownership (a sentiment the documentary attributes to antisemitism). She urged the sale of Monticello to the federal government. In 1923, the newly organized Thomas Jefferson Memorial Foundation, a private entity, bought the property. In the mid-1980s, it created a historical marker highlighting the most tangible and poignant reminder of the Levys’ long ownership: the grave of Uriah Levy’s mother, Rachel.

The Levys of Monticello culminates in images of the terrifying white supremacist protests in Charlottesville, Virginia, in 2017. And the documentary underlines one final irony: The mob chanting antisemitic slogans near the Thomas Jefferson statue on the University of Virginia campus apparently had no clue that it was the work of Moses Ezekiel, a Jewish sculptor.