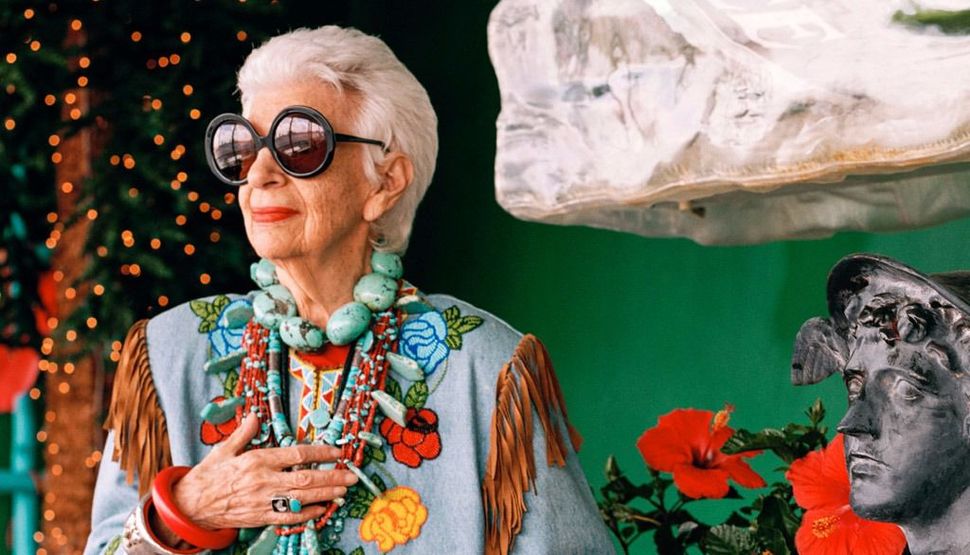 Iris Apfel is not your bubbe’s bubbe.

But by the end of the documentary “Iris,” you’ll wish she was yours.

Apfel, a spunky 93, has spent a lifetime successfully navigating the fine line between eccentric and icon. She mixed charity goods from flea markets with designer clothes to create looks that made her a fashion goddess.

I imagine that the film’s director, the late Albert Maysles (“Grey Gardens,” “Give Me Shelter”), had a relatively easy time here — assuming he could keep up with her. All he had to do was point and shoot. Apfel did the rest.

Here she is at the Metropolitan Museum of Art for an exhibit of her designs, an exhibit that subsequently toured several other museums. There she is on a home shopping network selling Iris Apfel baubles. Now she is lecturing University of Texas students and would-be fashionistas, on style and history.

With her signature short white hair and large, black-rimmed glasses, she is sharp and unafraid. About her unique look she simply says: “It just has to feel right to me. I like individuality. There’s so much sameness today. Everything’s homogenized. I hate it… I don’t have any rules. I’d only break them. I just go with my gut.”

That gut has led to one success after another. She started an upscale interior-decorating firm and, shortly after her 1948 marriage to husband Carl (he celebrated his 100th birthday during the filming of “Iris”) they jointly formed Old World Weavers, a high-end textile business that crafted the fabric designs Iris imagined but could not find anywhere. She also assisted in restoration projects at the White House for nine presidents, from Truman to Clinton.

The Apfels were adventurers, traveling the world in search of antiques and knick-knacks for their clients. And what she couldn’t sell, she kept. Iris is a very neat hoarder, with entire rooms — not closets, rooms — in her apartments (Park Avenue and Palm Beach) filled with racks of dresses and chests of draws stacked with bracelets and necklaces and other accessories. She still maintains a warehouse for the artifacts she’s brought back from various trips, although at film’s end she’s thinning those out.

“Iris” and Iris stand out in a couple of ways. Part of what makes the film so inspirational is how much the Apfel’s are still in love. After more than 65 years of marriage, they still look out for each other, hold hands and enjoy each other’s company.

Also, they’ve lived life on their terms. Iris was lucky. She found what she wanted to do very early in life, did it, and was successful at it. She did and wore what she wanted, and didn’t care what anyone thought. How great is that?

Great enough, anyway, to translate into a terrific documentary.