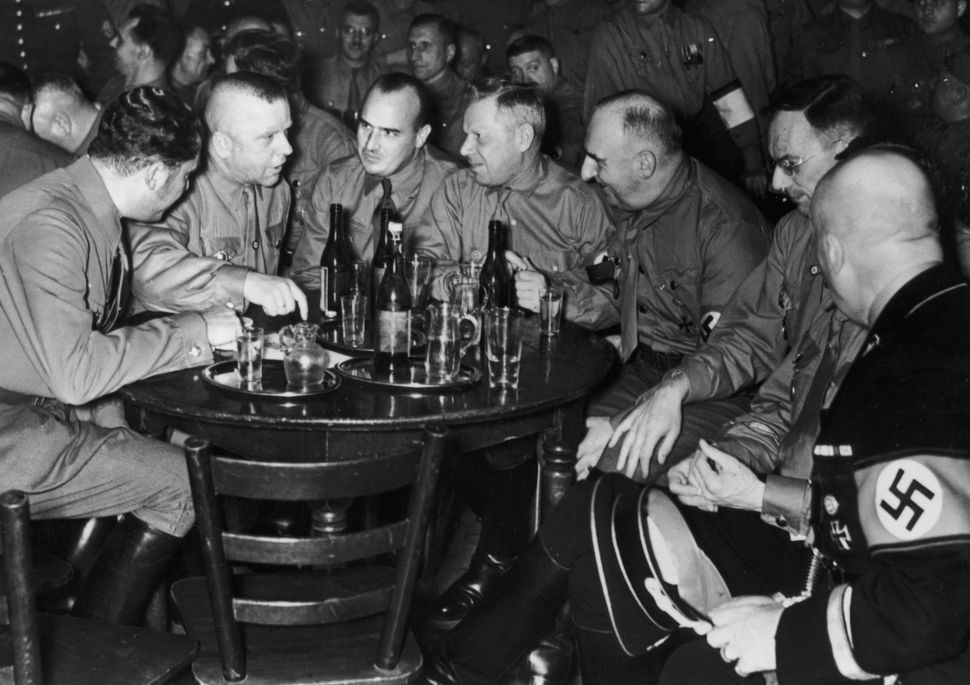 Legacy of Evil: Hans Frank (third from left) with other Nazi officials at a celebration for the 15th anniversary of the Beer Hall Putsch in Munich, 1938. Image by Getty Images

Every family history has dark periods. But how do you come to terms with the knowledge that your father is a notorious mass murderer?

“A Nazi Legacy: What Our Fathers Did,” a 90-minute documentary that had its world premiere at the Tribeca Film Festival in April, tackles this issue with great depth and sensitivity. It depicts the geographical and emotional journey the British international human rights lawyer Philippe Sands undertakes with the sons of two high-ranking Nazi officials: Niklas Frank, whose father was Hans Frank, governor-general of the occupied Polish territories, and Horst von Wächter, son of Otto von Wächter, an Austrian-born Nazi who later became the governor of Galicia.

While Sands discovers that his grandfather’s relatives perished in 1942, during a massacre near Lemberg (Lviv), which was part of Galicia, Horst von Wächter is forced to face his father’s legacy.

The director is David Evans, who is perhaps best known for directing the 1997 film “Fever Pitch,” written by Nick Hornby (who also wrote the book), as well as several “Downton Abbey” episodes. He is a university friend of Sands’s, who wrote, co-produced and narrated the demure yet powerful documentary. A barrister in London, professor of international law at University College London and author of several books, Sands also teaches at Lviv University, in Ukraine.

The Forward’s Anna Goldenberg talked to Sands about the most surprising aspects and the universal themes of the journey he undertook with the two men.

Anna Goldenberg: You were researching your own family history in Lemberg/Lviv when you came across the subjects of the documentary, Niklas and Horst by chance. How did that come about?

Philippe Sands: As part of a side story, I became very interested in Hans Frank. One of the books I read about Hans Frank was by his son Niklas. So I reached out to Niklas. I went to Hamburg. I went to see him. We got on really well, which I was very skeptical about. After all, this is a man who is the son of a most notorious mass murderer. And yet, straight away I could see, from his book [“In the Shadow of the Reich”], that this is someone who has confronted the truth in a very honorable way, perhaps to an excess. After our second or third meeting, he said, “Philippe, not everyone’s like me; you need to meet my friend Horst [von] Wächter.” 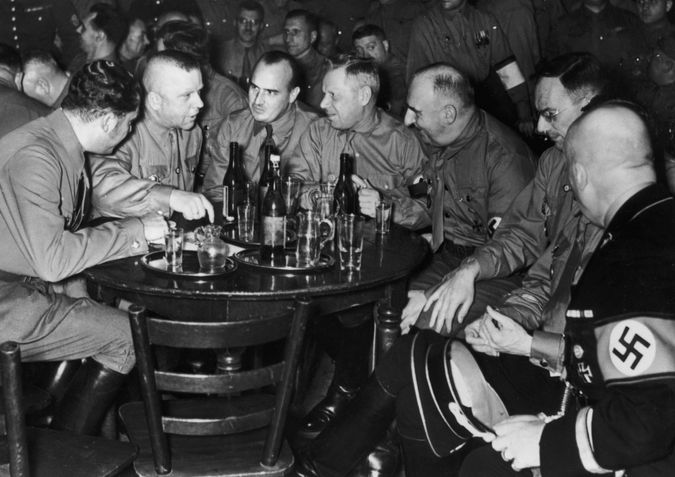 Legacy of Evil: Hans Frank (third from left) with other Nazi officials at a celebration for the 15th anniversary of the Beer Hall Putsch in Munich, 1938. Image by Getty Images

What is unusual about Horst von Wächter?

No one can think of anyone like Horst in any film that’s ever been made before. There are people like Niklas. There are a lot of people who condemn. But I challenge you to find anyone else like Horst, who has spoken on camera, whose father murdered half a million people and he will say he’s a good man. I think the film has a universal theme. It’s not a film about Austrians or Germans or Nazis, really. It’s a film about sons and fathers. There are lots of Horsts around, and none of them speak.

Why do you think Horst went on camera?

That’s the $64 million question. He knows that I treat him very respectfully, even if I may disagree with his interpretation about the events and history, that I will make sure, which I promised him, that his account will be faithfully reproduced. There are moments where I am going crazy inside, but I don’t condemn him — that’s not my role. So why did he do it? Trust, and because he became interested in exploring documents he never really focused on. He wanted to go through the same journey I was going through, but his interpretations are different.

Do you think he wanted to do the research and find out that his father was a decent man?

It was an opportunity to really explore what had happened with his father, which he hadn’t done. Now, maybe Horst knew all along he would go on this journey and would end up not condemning, but I don’t think that’s right. I think he went in with an open mind, but he dug his heels in. The more evidence he was presented with, the more he would find ways to escape the inevitable and obvious interpretation of the material he was presented with. I understood that. He wants to find the good in his father. How would I feel if my father killed half a million people? Would I still love my father? Can I say I know I wouldn’t love my father? No, I can’t say that. I don’t know how I would react. 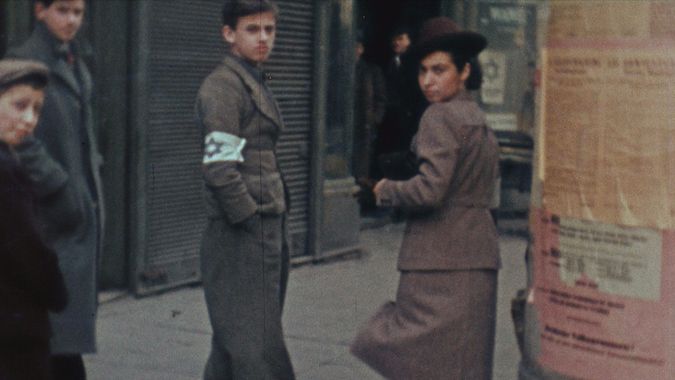 A Father's Work Image by Courtesy of Niklas Frank

To what extent do you think the individual father-son-relationships played a role in Horst and Niklas’s respective approaches?

I think there are three variables. One is the relationship with the father. It’s plain that Horst recalls a father who loved him; Niklas recalls a father who didn’t love him. The second variable is the relationship with the mother. It’s plain that Horst adores his mother. There’s a moment in the film where he says, “My mother loved my father always, and would never say anything against him.” And that’s not the case for Niklas. The third variable, that I think is a factor, is that one is German and one is Austrian. Let’s speak frankly: Germany has come to terms with its past, Austria has not… I think Horst has been able to grow up in an environment where he’s not been confronted with the realities of what happened, whereas Niklas in Germany really had to work this out.

There are moments in the film where you seem exasperated about Horst. Were there also moments that you didn’t see coming?

The single most surprising thing: Ukraine. I said, let’s go to Lemberg with a camera crew. Let’s go to the places where the killings took place. Horst said, “that would be great, but let’s time it with the celebration of my father’s Waffen SS Galicia division.” We were like, what? They are celebrating your father’s Waffen SS Galicia division? He said, yes, there’s re-enactment, and you’re going to meet all the people who really think my father is a good man. We went to the synagogue, and to the mass grave. That was heavy. Then we take a day to drive to a place called Brody, the birthplace of Joseph Roth. We go to a field where there’s a chapel and a few hundred people, and people in Waffen SS uniforms. That is one of the most shocking things I’ve ever seen. And then it gets worse: They all love his father. We saw that they were giving out photographs of his father. We ask Horst, how do you want to be introduced? The son of the governor. The moment that for me encapsulates that true awfulness of the situation is when Horst gets into the car as though he was the governor. He doesn’t get into the front; he doesn’t go and look at the car — he goes over to it, he opens the door and he sits in the back like he’s the governor. That moment was really distressing. Nothing in the film was staged. Everything was spontaneous.

What was going through your head?

Just appalled. Just upset, because I like Horst. And he says in that interview at that time, this was the best day. My next question to him was does it matter that the people who think you’re father is decent were dressed in Nazi uniforms. And he said no, doesn’t matter at all…. The fact that they are burying the remains of German soldiers who were killed in the Battle of Brody in 1944 as war heroes, and the disconnect to three and a half thousand Jewish bodies in a mass grave, who are there today, unrecognized, uncelebrated, unburied, is just pretty powerful. That has hit me very strongly.