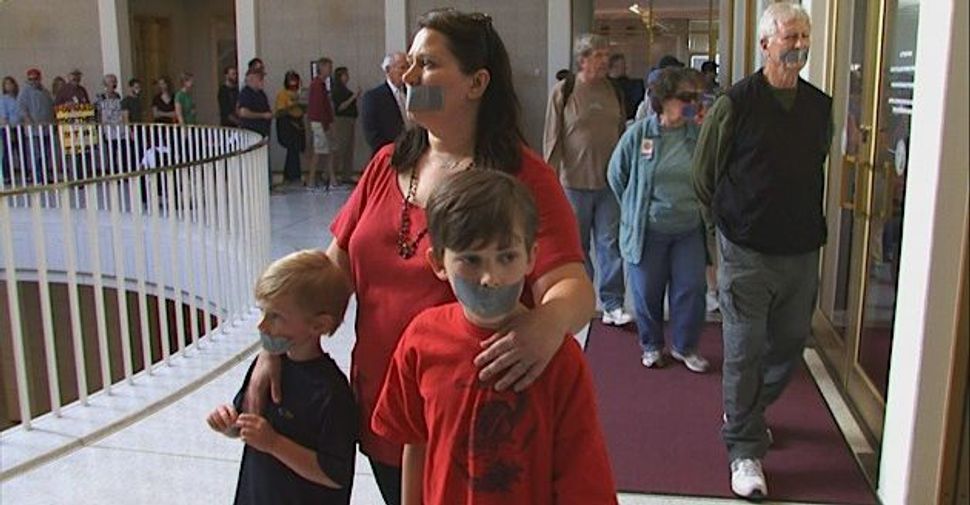 Speak No Evil: Barbara Kopple’s ‘Hot Type,’ follows The Nation’s writers in the editing room and on assignment, such as at this protest of a so-called voter suppression bill. Image by Courtesy of Barbara Kopple

“Hot Type,” Barbara Kopple’s documentary about The Nation, celebrating the liberal magazine’s 150 years, begins with a snappy rat-a-tat of typing. We see typewriters from every era, signaling the passage through time via technology. As The Nation’s editor in chief for 20 years, Katrina vanden Heuvel, notes in the film, “I used to man the telegraph machine, and remember the invention of the fax. How many publications can say they’ve gone from type to Twitter?”

The relationship between Kopple and The Nation began in 1998 when Hamilton Fish, then The Nation’s publisher, invited her to film their writers’ conference. “Hot Type” illustrates The Nation’s contribution to the history of ideas, politics and American democracy in flux, and takes us into the newsroom for weekly editorial meetings.

At The Nation’s Manhattan offices, “retired” editor in chief Victor Navasky seems almost to be a talmudic presence, exerting influence at editorial meetings, mentoring interns, and finding ways to fund the operation of the magazine. In one of the film’s humorous moments, the late Paul Newman bemoans the day his pal E.L. Doctorow introduced him to Navasky, resulting in a flow of checks.

Speaking in her light-filled corner office that once belonged to Navasky, Katrina vanden Heuvel told me that she thought a documentary would be an apt tribute to her publication’s 150 years. “A film leaves people engaged, more than events,” she said.

“I wanted the film to be timeless. I didn’t want to do a historic piece,” said Kopple, a two-time Academy Award-winning documentarian whose films include 1976’s “Harlan County, USA,” about striking miners in Kentucky, “Wild Man Blues,” which followed Woody Allen on a European tour with his jazz band, and “Running from Crazy,” a revealing portrait of Mariel Hemingway and the suicide that runs in her family. She is now working on a film about Sharon Jones and the Dap-Kings. Jones, says Kopple, is “the female James Brown.”

“I like to go out and explore, see what the issues are. I like to see people who are doing spectacular things, and who care,” says Kopple. “I like to see that I am not out here by myself. The Nation is an institution that leads by example: a lightning rod in America, a target during the Red Scare when having a subscription was a badge of courage for readers.”

“Running from Crazy” was commissioned by Oprah Winfrey’s cable channel. “The Nation made the film happen, with no rights to change content,” Kopple said of their collaboration. “They made suggestions that I did not have to take, but they were all great. It’s their magazine: They know who is going where. I wanted to go out with the reporters to find out what it is like. The reporters care about people and give them voice. Amy Wilentz went to Haiti, Dani McClain to North Carolina. John Nichols, a fifth-generation Wisconsinite, covers the labor disputes in Madison. Richard Kim went to Occupy Wall Street, so we went to all these places with cameras. I wanted to focus on youth and the next generation of readers and writers.”

The Nation was founded by Republican abolitionists in 1865, keen on both ending slavery and telling nothing but the truth. A roster of contributors reads like a who’s who of American authors, politicians and intellectuals: Gore Vidal, Toni Morrison, Kurt Vonnegut, Martin Luther King, Jr. James Baldwin wrote about stop and frisk in Harlem in 1966. In 1962, Pat Buchanan wrote an article about prisons.

Kopple’s favorite part of the film featured Reverend William Barber in North Carolina leading protesters of the “monster voter suppression bill” in civil disobedience by dramatically taping his mouth shut for a day. “When he ripped it off saying this is the last time to be silent, it’s like the movie Selma where Oprah’s character tries to vote. Reverend Barber was a great character and full of life.”

When the film premiered at the Museum of Modern Art during the Hot Docs documentary series, many at the after-party in the museum’s ample lobby remarked at what hadn’t been included — such as The Nation’s positions on Israel.

“The film doesn’t grapple with our debates about Israel, but we have a great history: Ronald Radosh wrote a piece lobbying Truman, the UN, for the creation of the state of Israel,” said vanden Heuvel. “Our editor, Freda Kirchwey, was a fierce anti-fascist who saw the state of Israel as the logical endpoint of the struggles of World War II. Victor co-edited an issue called ‘The Myths of the Middle East’ with some of the same issues we are looking at today: What is Zionist identity? What is the state of Israel, a secular state, a religious state? Perhaps the greatest threat to Israel’s security is from within, with the settlements; this was an issue 33 years ago.”

As to Victor Navasky being dubbed talmudic, at the MoMA debut, he laughed and said, “I’ll take it. There are worse things they can call you.”

Regina Weinreich is a co-producer and director of the documentary “Paul Bowles: The Complete Outsider.”