A Jewish ‘Ulysses’ at the Cannes Film Festival 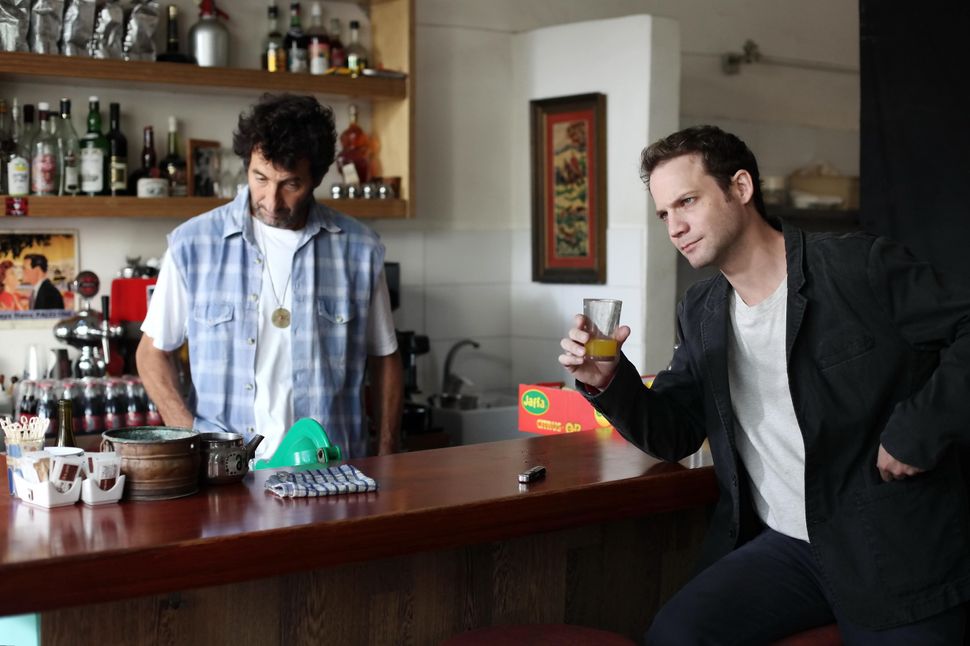 It’s the 68th installment of the world’s most glamorous film festival, and thousands of filmmakers, actors, movie execs, journalists, tourists and adoring fans have descended on this small, surprisingly unremarkable town along the French Riviera, a town whose name is synonymous with cinema.

Last Wednesday, the International Jury headed by the American directing duo The Coen Brothers (Joel and Ethan) presented itself at the festival’s inaugural press conference.

The filmmakers’ relationship with Cannes goes back nearly 30 years, when their screwball comedy “Raising Arizona” screened out of competition. Four years later, their dark Hollywood satire “Barton Fink” was an unexpected triumph, capturing the festival’s highest prize, the Palme d’Or and establishing the Coens as the most exciting filmmaking duo of the day. Since then, two of their subsequent films “Fargo” and “The Man Who Wasn’t There” have scooped the festival’s directing award. Most recently, their 2013 folk-music-biopic “Inside Llewyn Davis” took home the Grand Prix, the de facto second place prize. Incidentally, the Jury President that year was Steven Spielberg. (Whether by accident or by design, the brothers’ two strangest and Jewiest films, “The Big Lebowski” and “A Serious Man,” were not chosen for this high-minded festival).

The only other Jewish member of this year’s jury, Jake Gyllenhaal, joked about the group being neatly divided into the “Joel Camp” and the “Ethan Camp.” Asked about why he had signed up for the grueling job of watching and evaluating over 20 films in a ten-day period, Gyllenhaal said, “I was just thrilled about seeing films before anyone else in the world would see them. And for free.” Fielding a question about Ingrid Bergman, the icon of this year’s festival, whose face is plastered on just about every conceivable surface here, Gyllenhaal alluded to father, the director Stephan Gyllenhall: “I’m Swedish and I deeply hope that I’m related to her somehow and in some form.” However, it was his mother, the producer and actress Naomi Foner, who is the avid fan. Gyllenhaal has promised her the festival poster, on which the “Casablanca” star is featured.

2014 was a bumper year for Israeli cinema, with five of that country’s films screening at Cannes in the festival’s main and sidebars sections, most impressively Ronit and Shlomi Elkabetz’s “Gett, the Trial of Viviane Amsalem” and “Self Made” by Shira Geffen. This year, there are only two Israeli features on the festival slate. The first to arrive was Elad Keidan’s “Afterthought.” It isn’t competing for any of the main prizes, but is a contender for the Camera d’Or for best first film.

Set in Haifa, the film centers on two men crisscrossing the staircases along the Carmel Mountain, leading down to the port. As boring as that premise sounds, this film is anything but. Take for instance the long opening shot, a panning wide shot of Haifa as seen from the port. The customary soundtrack of seagulls and foghorns gives way to a prolonged fit of coughing, snippets of telephone conversations and a radio broadcast of a music program called “Their Most Mediocre Performances”: the artist of the week is Jascha Heifetz, a deadpan deejay informs us (next week’s will be Yehudi Menuhin).

Moshe, a former archeologist who owns a fleet of coin-operated mechanical horses, is spending the day looking for an earring that his wife has lost (she thinks) somewhere walking on the stairs. Uri, a writer who’s just broken up with his girlfriend and is plotting to skip the country in order to ditch his mandatory reserve duty, walks up and down the endless staircases, committing his momentary inspirations into a tape recorder, and putting things in order to the extent that he can in his distracted, nervous state.

As the film meanders, a narrative arc comes into focus. My hunch is that Keidan has set out to do a version of “Ulysses.” Like Joyce’s opus, “Afterthought” follows two men walking all over a city in the course of a single day, eventually intersecting briefly yet meaningfully. Like Joyce’s alter ego Stephan Daedalus, Uri is a restless writer dreaming of going abroad. Moshe shares Leopold Bloom’s melancholy as well as heartbreak caused by an unfaithful wife.

A free associative logic seems to guide the film. The situations that Keidan throws his characters into are often absurdist or surreal, but the film’s bizarre chain of events rarely seems contrived or forced. There is Moshe in an Arab lawyer’s office explaining his dream to build a museum to the Naqba (he thinks only a Jew could get away with it and that it would be great for tourism) and Uri spontaneously deciding to be a character witness for a former classmate who once broke three of his fingers. When Uri makes it to the port to board his steamer, the barbershop quartet he sings in sends him off in classy musical style. The film’s title is explained in a hilarious monologue, delivered by an irate chassid, who doesn’t understand the function of voicemail boxes. It would be much better, he says, to be able to leave a message for someone after you’ve spoken to him, to say the things you couldn’t bring yourself to say during the conversation. This is “afterthought,” what you really meant to say, your true thought.

Keidan’s film also scores a victory for Cinéfondation, Cannes young filmmakers program. In 2008, his short film “Anthem,” won the Cinéfondation’s top award, a 15,000-euro cash prize that guarantees that the director’s next film will screen in the official Cannes selection.

A Jewish ‘Ulysses’ at the Cannes Film Festival