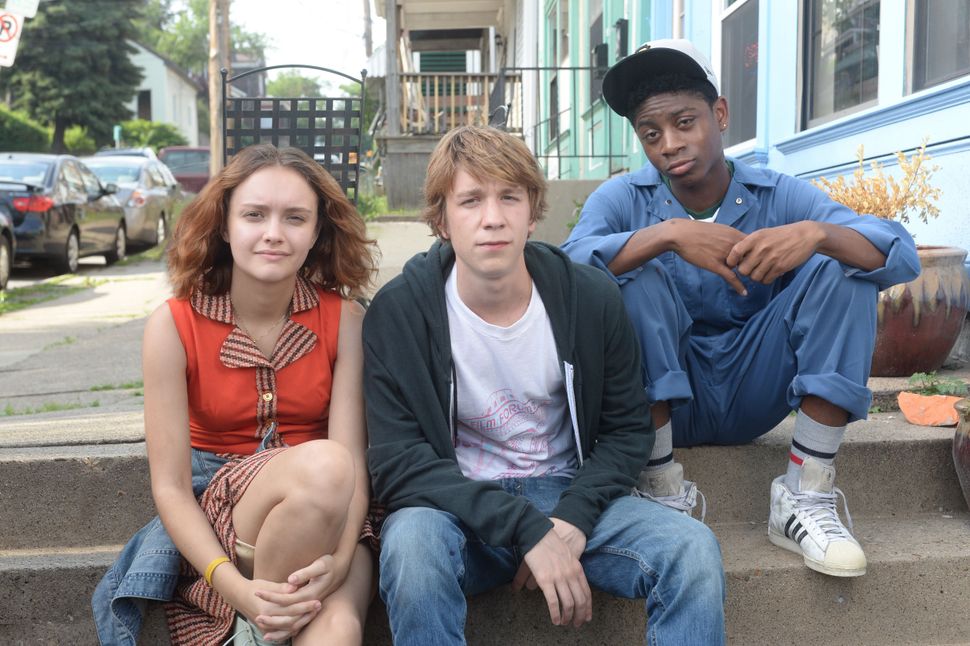 Jesse Andrews is having another moment. Three years ago, the 32-year-old’s debut novel “Me and Earl and the Dying Girl” hit bookstores, topped the New York Times best seller list and proved that a story of friendship between high school senior Greg and his cancer-stricken friend Rachel, could deliver pure comedy and gentle poignancy, without a drop of heavy handedness. Now he’s back, making his screenwriting debut with the recently released film adaptation of “Earl”—which premiered at this year’s Sundance Film Festival to a Grand Jury Prize and frenzied studio bidding.

The Forward spoke to Andrews about the challenges of translating book to script, revisiting his high school past for inspiration and how Hebrew School introduced him to feminism.

Every time I read a book with a very relatable main character like Greg, I always secretly hope that the author is exactly like the character. How much of yourself did you put into Greg?

I tend to think I bear less resemblance to Greg than friends and family think I do. I think if you asked them they would tell you that we have an enormous amount in common, but that’s something I’d like to downplay. I was certainly more like Greg in high school than I am now, or at least I’d like to think so. Maybe I’m flattering myself.

Was it difficult to slip back into that teenage mentality of complete uncertainty and anxiety?

I would say it was worryingly natural. I think those feelings that one has at that age are so intense that they really burn themselves into your memory. It really wasn’t that hard to access them. I think when you get older you get better at dealing with circumstances of uncertainty and insecurity, but you can still very easily stumble into that situation of like, “Oh my God, what did I say, I feel like an idiot.” That’s the source of comedy for a show like “Curb Your Enthusiasm.” As weird as it sounds, Larry David was some of the inspiration for Greg—there’s so much comedy in painful, awkward realism.

Now that you’ve entered the public eye, with the movie release and all of the interviews and publicity, do you ever feel like those high school feelings return?

You show up at high school, there’s all these kids you don’t know and you’re terrified that people will have some kind of wrong or unpleasant impression of you. You just don’t want anything to ruin your public persona, because you actually have a public persona in high school. So I do get flashes back to that. This movie is out there now, there’s people out there who have heard of me and it’s a similar thing, where you hope people like the movie and the book. Of course, some people won’t. And it’s nerve wracking, it is a high school feeling, you do slip back into that. But that’s just the flip side of getting something that I’ve always wanted to have. It’s a minuscule price to pay.

How daunting of a task was it to translate your work into a screenplay?

The script has to be much more standardized because in some ways it’s a blueprint, a technical document. It also has much greater economy than a novel — you can’t be expansive with your descriptions of any one thing. You really have to make every word, every line do as much as work as you can because you have such limited real estate. The movie was always going to be something different from the book. I knew it was going to be a number of people getting the chance to tell the story together. The actor has the words but still makes the character around them. They fill it in in all these ways that you can’t legislate from the page, nor should you try to.

Hebrew School makes a number of cameos throughout. Was your experience at all similar to Greg’s in the sense that it was—“a giant pain in the ass but had a good boy/girl ratio”?

Yes, that was identical to my Hebrew School experience. To the point where the one other dude in Greg’s hebrew school class is recognizable to the one other dude in my hebrew school class. And then it was all girls. Very strong personalities, too. Hebrew School was my first introduction to real feminism. I remember that much more than I remember any kind of actual religious teaching. That was cool, it was good to be around strong girls. But I really was not a good sport about going. I fought tooth and nail, I didn’t want to learn Hebrew, my Bar Mitzvah came around and I didn’t want to read the Torah portion. I look back with a lot of chagrin about how I behaved.