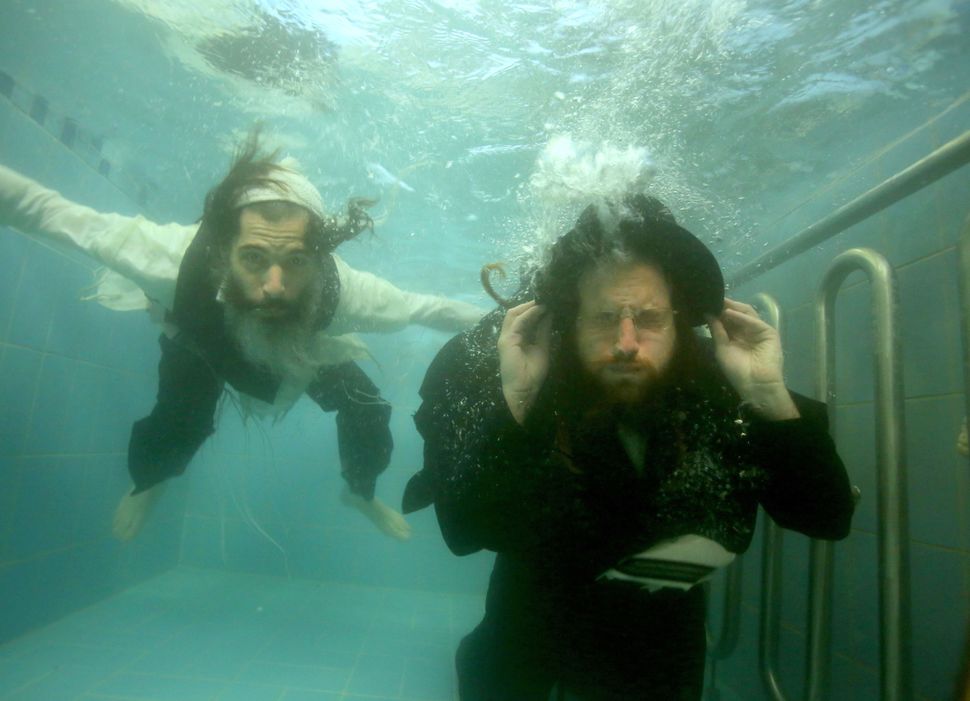 Image by Courtesy of Menemsha Films

This difficult question forms the basis of Israeli filmmaker Ori Gruder’s extraordinary documentary, “Sacred Sperm.” The film, made with the support of the Israeli television station HOT-Channel 8 with world sales handled by Go2Films, is aimed at a secular audience. It has received numerous screenings at film festivals in the United States and Europe, and has also been shown on television in Sweden and Russia. According to the film’s U.S. distributor, Menemsha Films, “Sacred Sperm” is due to be released in American movie theaters later this summer, though no opening date has been set.

Gruder became Haredi at the age of 30, after Scala Studios, an Israeli production company, had sent him to make a documentary in Uman, Ukraine, a well-known pilgrimage site for Hasidim visiting the grave of Rabbi Nachman of Breslov. But after a year of religious study, his rabbi understood that he needed to make films. “Not working in the film industry was not good for my soul,” Gruder explained. He was granted a religious dispensation on the understanding that he seek rabbinical permission before making a film. His later work deals with subjects connected to Judaism and faith, made for a secular audience.

In ”Sacred Seed,” Gruder admits to committing acts of penance to make amends “for that which I wasted” during his “wild” years. Atonement and purification took the form of giving money to charity, fasting and immersing in a mikveh full of ice cubes. He still takes an annual trip to Mount Hermon, where he rolls naked in the snow.

Gruder, who was in London in June for his film’s screening during SERET — the London Israeli Film and Television Festival, is a striking yet willowy, almost ethereal figure. His long, gray-and-white, wizardly beard appears to be an extension and expression of his creative and easy-going nature.

The father of six says that ”Sacred Sperm” has opened up the subject within the Haredi community, and that rabbis were waiting for the right time to start talking about it. “For them it’s good that I was the one who took it on,” he said. He says he is particularly delighted that it has also broken down barriers between ultra-Orthodox and secular Jews. “Sacred Sperm” provides “a look into a keyhole that needs to be opened more.”

Significantly, the film shows Gruder seeking permission from his rabbi to make the documentary; the rabbi requests that Gruder do it “modestly.” Gruder’s wife reveals her reticence; she was afraid it would disturb their lives and those of their children. And it did raise a bit of concern, he says, but it was minimal. Rumors were rife that the film showed nudity, and as a result Gruder received anxious calls from rabbis both within and outside his community.

Gruder’s interviewees speak with surprising candor, encouraged by his thoughtful, probing questions. One of his friends, Yisrael Aharon Itzkovitz, who was born into the Vizhnitz Hasidic sect, explains that from an early age, Hasidic boys are taught not to touch their sexual organs. “If as a young Jew, you learn not to look at improper things, you don’t do improper things,” he says.

Itzkovitz shows Gruder a long, wide undergarment worn by Haredi men and boys underneath their black pants. The baggy, loose shape is specifically designed to guard against arousal as well as to allow them to urinate without touching themselves.

However, preventing what is natural is difficult, especially for adolescent boys. The Gemara, Itzkovitz says, advises one to dig his fingernails into the ground or to stand on tiptoes. Deep breathing, jumping and fast walking can also help. Gruder acknowledges that it can be difficult for a nonreligious person to understand this daily struggle; he says that the rabbis also appreciate that it is not easy. “It seems like it’s against nature. I’m agreeing with that, but God wants us to know what we are doing, to conquer our body. A brave man is one who conquers his passion,” he said.

A secular clinical psychologist who sees members of the London Haredi community in her practice, and who requested that her name be withheld for this article, agrees about the challenges. Rabbis and counselors recognize the difficulties for young men and boys, she said. But it is important to understand that “the Haredi attitude is that everything they do is for a higher purpose. The ultimate goal for a parent is to deliver their son to their chuppah [wedding canopy] in a state of holy purity — spiritually, mentally and physically.”

At the beginning of “Sacred Sperm,” Gruder admits to confusion about this complicated issue. Did making the film resolve matters for him?

“I’m still confused,” he says. “I don’t have all the answers yet. I have to use faith. And that’s what I told my child.”