David Foster Wallace Wouldn’t Approve Of Me Loving This Movie. Too Bad. 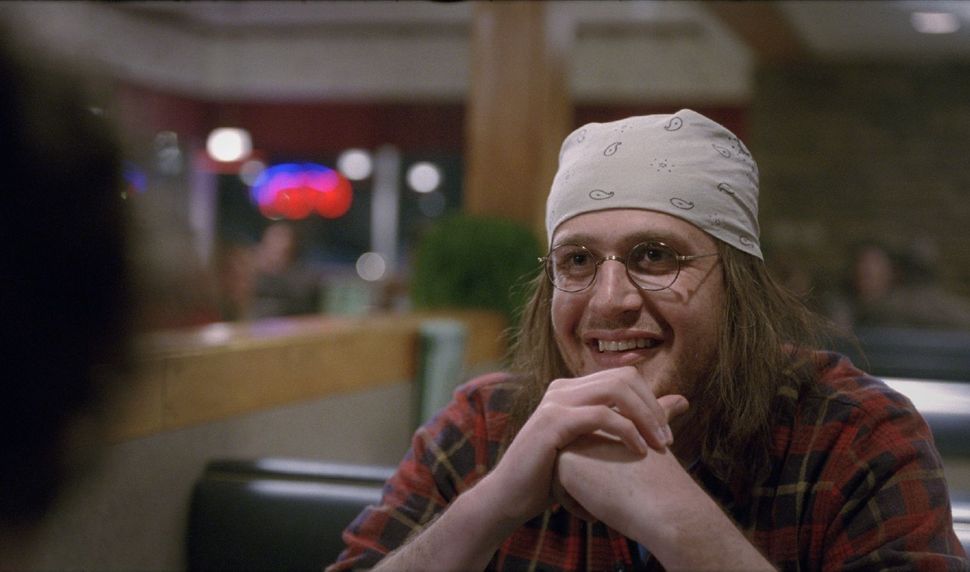 Let’s get this out of the way — I never finished “Infinite Jest. “ (As a friend recently put it, “Has anyone really?” )

In fact, any guy who listed the book among his favorites was automatically flagged as untrustworthy on my OkCupid scale of dateability.

But it seems that some humans have made it through all 1,079 pages. Or enough to warrant the making of a surprisingly touching and compelling movie about its author, the late David Foster Wallace, who tragically committed suicide in 2008 at the age of 46.

Directed by James Ponsoldt, the film is based on Rolling Stone reporter David Lipsky’s memoir, “Although Of Course You End Up Becoming Yourself,” about his experience interviewing DFW over a five-day road trip in 1996.

Jason Segel, known for playing versions of the same dopey-yet-lovable lumbering giant on “Freaks and Geeks,” “How I Met Your Mother” and “This Is 40,” plays Wallace. “The Social Network” star Jesse Eisenberg, who oozes unpleasantness in every role (this movie is no exception), plays Lipsky.

The initial pictures from the set struck panic in the hearts of devoted Wallace fans. Sporting DFW’s signature bandana, round Lennon-like glasses, and major dad-bod, Segel looked like a mad scientist-cum-stoner version of the author. But would he play him that way?

Turns out, the answer is a resounding no. Segel’s performance is a complete departure from his Judd Apatow persona. Wallace may be the literary rock star of the hour, a critical darling — but lurking under every self-deprecating joke about using his fame to get laid is a twinge of real vulnerability. You can’t help but think that just 12 years later, this man will take his own life.

It never occurred to me that Jason Segel could make me feel feelings. No doubt the Oscar judges are busy getting familiar with his oeuvre. Might I suggest “Forgetting Sarah Marshall”?

It must also be said that Eisenberg gives a stellar performance as a nebbishy, insecure, petty, jealous-yet-awestruck reporter.

With its endless feasts of peanut M&M’s, trips to McDonalds, and a memorable foray into the mad world of the Mall of America, the movie could have veered into the bro-tastic if not for the pervasive equation underlying DFW’s work:

“Infinite Jest” takes its name from the book’s central plot device: a film so addictive in its entertainment that it causes its viewers to lose interest in anything else, until they ultimately die.

“I think that if there is a sort of sadness for people under 45, it has something to do with pleasure, and achievement, and entertainment — like a sort of emptiness at the heart of what they thought was going on,” Segel, as Wallace, says in the film.

“If the book is about anything,” he tells Lipsky, “it’s about the question of ‘Why?’ Why am I watching all this shit? Why do we feel so empty and unhappy?”

The answer, in Judaism, as in life, seems to be moderation. Too bad modern society isn’t so good at that. How many hours did you spend bingeing on Netflix this week?

For Wallace, television is like a pack of Twizzlers. Eat it from time to time, and you’ll relish its sweetness. Gratify yourself constantly, and your insides will rot. (Maimonides, a big fan of moderation, says very similar things about sex.)

In a 1993 essay for the Review of Contemporary Fiction, Wallace wrote: “Television looks to be an absolute godsend for a human subspecies that loves to watch people but hates to be watched itself. For the television screen affords access only one way. A psychic ball-check valve. We can see Them; They can’t see Us. We can relax, unobserved, as we ogle. I happen to believe this is why television also appeals so much to lonely people.”

As Jason Guriel points out over at The New Republic, a film about David Foster Wallace is inherently ironic. Watching “End of the Tour,” it occurs to me that I am, and those around me are, the “lonely people.” And as we ogle Wallace, we are participants in the very mass entertainment he warned us against.

This unsettling thought, combined with the skill with which the film depicts Wallace’s deep-seated anxiety about how he is portrayed in the media, ironically gives weight to the many objections the author’s family and friends have voiced throughout the production process.

“David would have howled the idea for it out of the room had it been suggested while he was living, and the fact that it can go ahead because he’s dead makes me very, very sad,” Wallace’s longtime editor Michael Pietsch told the Los Angeles Times. “Anyone who has read David’s writing knows how tormented he felt about being a public figure and his overwhelming anxiety about being on the wrong side of the screen. The existence of a mythification of this brief passage of his life strikes me as an affront to him and to people who love his writing.”

This has led some, like Guriel, to declare that they won’t see the movie. I disagree. Movie-version DFW is adamant about his “regular-guyness.” He feels the tentacles of fame creeping in and is protective of his privacy. As viewers, we feel for him.

But as Lipsky says in the film, “You don’t crack open a thousand-page book because you heard the author is a regular guy. You do it because he’s brilliant.”

Ultimately, DFW’s strength has always been his writing. This movie spreads that gospel. And I think I might be a new convert.

I’m usually the Ayatollah of reading an author’s work before seeing the biopic. Due to the circumstances (ie. having seen the movie already), I’ll make an exception.

“Infinite Jest,” I’m coming for you.

David Foster Wallace Wouldn’t Approve Of Me Loving This Movie. Too Bad.