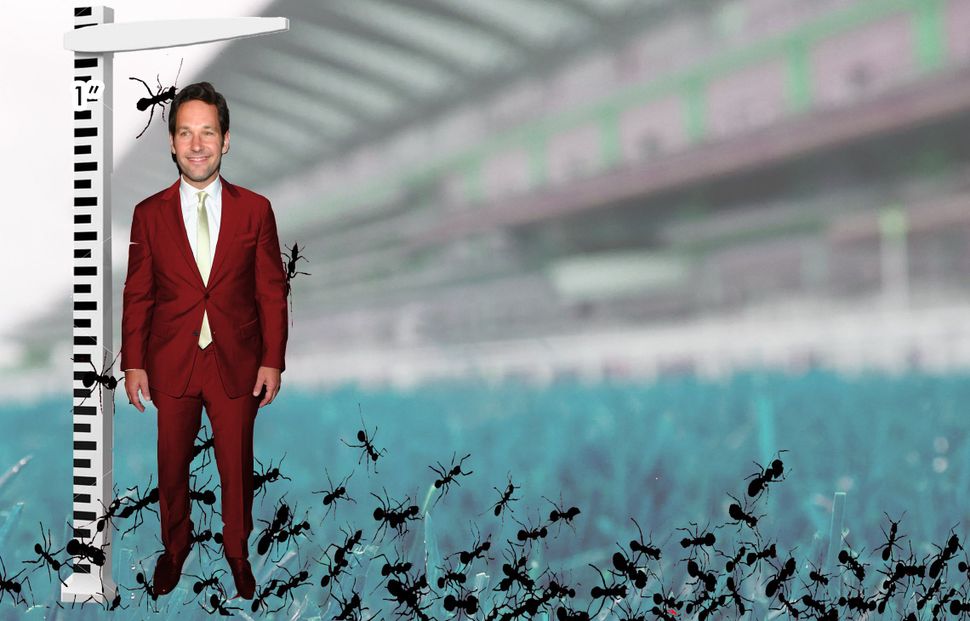 I was really excited to see “Ant-Man.” It combines many of the things I love: ants (which I love mostly on screens, à la “Microcosmos,” and not near any of my desserts), superheroes (who I love, despite their ingrained sexist flaws) and Paul Rudd (who I love, unconditionally).

As for the man in my life, I had to drag him to see this movie. The husband was more interested in another Jewish movie, “Trainwreck.”

“At the third extravagant and unnecessary explosion, I walk out of the theater,” he said as he put on his 3-D glasses.

My husband and Paul Rudd have a lot in common: They were both raised Reform Jews, they both grew up in Kansas City, are Kansas University alums and, as such, are both avid and hopeless Kansas City Royals fans.

There is one thing Paul Rudd and my husband do not have in common, though. My husband is a Short Jewish Man (see also Jon Stewart, Jason Alexander, Paul Simon, etc.), while Paul Rudd is an average-but-taller-than-average-for-a-Jew at 5’9”.

I have almost exclusively dated Short Jewish Men. I am a fan for the following reasons: Kissing them does not hurt my neck, they fit snuggly on my full-sized mattress, they don’t stand out in crowds, and they do not hit their heads on ceilings. Trading shirts is also easier.

So it did not surprise me that this movie, which features one of the first Jewish actors ever to play a superhero, is about, essentially, the shortest superhero ever.

Yes, Ant-Man’s special power is his ability to shrink to the size of an ant. Many might scoff at this premise, but knowing the advantages of Short Jewish Men, I had faith.

One hundred and seventeen minutes later I considered my faith vindicated and now, after finding out the movie grossed almost $60 million in the opening weekend, I feel Team Short and Jewish is on the rise.

“Ant-Man” is the most Jewish superhero movie to have come out in a long time. The hero, his mentor and the villain are played by Jewish men. Paul Rudd, a brilliant Robin Hood-esque robber turned superhero who has a master’s degree, knows how to break any safe but has no clue not what quantum physics is. He also says “I’m sorry” a lot while kicking ass, which as my husband whispered in my ear, “is so Jewish.”

Then there’s Michael Douglas (a fairly average 5’10”) who plays a cold but loving Jewish dad and mentor, who, unfortunately, is probably the least relatable character in this whole movie.

And of course there’s the crazy villain Darren Cross, played by the suspiciously tall Jew Corey Stoll, who, as a relief to us all, shrinks to the size of an ant as Yellowjacket.

There are also ants. Lots of them. And they’re pretty Jewish too. As the Book of Proverbs says: “Go to the ant, thou sluggard; consider her ways, and be wise: which, having no guide, overseer, or ruler, provideth her meat in the summer, and gathereth her food in the harvest.” Which is exactly what Paul Rudd does in this movie, with less food gathering and more breaking into places and saving the world type stuff.

And while some of the science of this movie many not be sound, the one thing it does prove without a shadow of a doubt is that Paul Rudd is 200% cooler when he’s 90% smaller.

Bottom line, on a scale from subatomic to giant garden gnome, I give this movie a very solid 5’6”. Which, coincidentally, is my husband’s height, who, I am happy to say, sat through the whole movie.