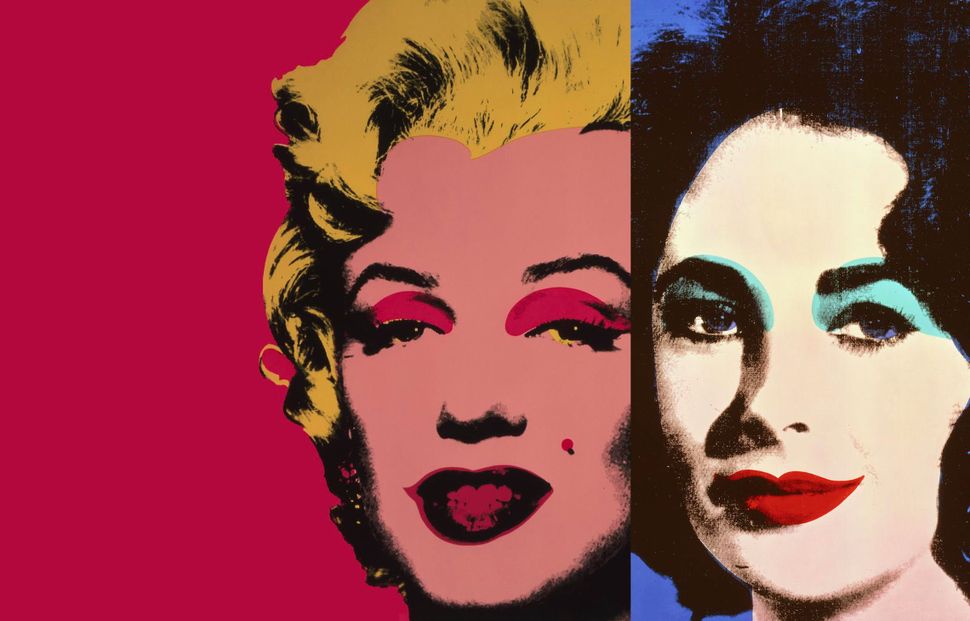 On a spring day in 1956, Rabbi Robert E. Goldburg paid a visit to Marilyn Monroe’s New York City apartment. Before the 30-year-old actress tied the knot with playwright Arthur Miller that summer, she wanted to convert to Judaism.

In a neatly typed letter set inside a display case at the Jewish Museum’s new exhibit “Becoming Jewish: Warhol’s Liz and Marilyn,” Goldburg, who passed away in 1995, recounts the private conversion classes he gave Monroe, the discussions he had with her, the books they read, and her musings on religion and family.

His keen observations of the actress — from her skills as a pupil (“Marilyn was not an intellectual person,” he wrote, “but she was sincere in her desire to learn.”) to her fragile mental state — are, according to the curator of “Becoming Jewish,” Joanna Robotham, a crucial insight into a complicated performer.

“We thought it was a nice match,” Robotham said. “To show Warhol’s celebrity version of them and then this other, very deep private side to them.” She gestured to the gallery’s walls, adorned with Warhol’s portraits of the actresses: parted red lips, violently blue eye shadow, heavily contoured cheeks. Inches away lies a display case filled with decidedly more personal mementos: a photograph of Taylor, hair masked in a scarf, walking along the Western Wall, and a delicate musical menorah from Monroe’s personal collection. “Both actresses really took this conversion to Judaism very seriously,” Robotham added. “It meant something to them.”

Taylor, who was raised in a Christian Science household, had considered converting during her marriage to her third husband, Jewish film producer Mike Todd, but didn’t start the process until after Todd’s death in 1958. A devastated Taylor approached Rabbi Max Nussbaum of Temple Israel in Hollywood, California, saying she was ready to begin her conversion.

“Her marriage to [Todd] meant so much to her.” Robotham said. “I think [the conversion] was her way of honoring him.” Taylor spent six months in intensive study before officially converting. On the day of the ceremony, she gave herself the Hebrew name Elisheba (“dedicated to God”) and said she believed that Judaism would bring her happiness and fulfillment.

Goldburg’s early discussions with Monroe revealed that she, too, grew up in a religious household. The actress recounted, reportedly with great distaste, her childhood memories of living with devout fundamentalist foster parents. Judaism, she said, offered her something different. “She indicated that she was impressed by the rationalism of Judaism,” Goldburg said . “Its ethical and prophetic ideas and its concept of close family life.” Miller insisted that he played no part in the actress’s decision to convert.

When Monroe divorced the playwright in 1961, she told Goldburg that she had no plans to renounce Judaism. In what would be their final conversation, the rabbi recalls delving into more intimate matters, including her mental state and the psychiatric treatment she was undergoing. Goldburg noted that she appeared hopeful about the future. Later the rabbi wrote that he, along with Miller, believed Monroe’s death to be accidental. “With a little bit of luck, she could have made it,” Miller told the rabbi.

Although Warhol had met neither Monroe nor Taylor when he created the “Liz and Marilyn” paintings, he followed their stories closely. The portraits — screen printed and reproduced from publicity shots and magazine photos — were created in response to their personal tragedies. Taylor’s was born after the actress’s emergency tracheotomy during the filming of “Cleopatra,” Monroe’s after her death. When Taylor recovered from the surgery, Warhol returned to the portrait, applying bright colors over her lips and eyes.

Hanging beside the paintings of Taylor and Monroe in the exhibit is a framed front page of the New York Mirror with the words “Marilyn’s Last Day of Life” splashed across it. Pulled from Warhol’s personal collection, the clipping was just one the many fan magazines, paparazzi photographs, publicity stills and celebrity memorabilia that the artist collected. He was both a fan and a critic — fueled by a love for the salacious and a desire to comment on obsession.

On Robotham’s end, analysis of Warhol’s creations takes a back seat to the very real and significant impact that the work has had on Jewish consciousness as a whole. “The fact that Hollywood’s blond bombshell and violet-eyed siren were both converted Jews was significant: It signified a growing popular acceptance of Jewish public figures.” The curator writes in her exhibit statement. “Warhol’s images cemented their status as the most glamorous women of their era, the 20th century’s great myth and legend.”

“Becoming Jewish: Warhol’s Liz and Marilyn” will run at the Jewish Museum, in New York City, through February 7.