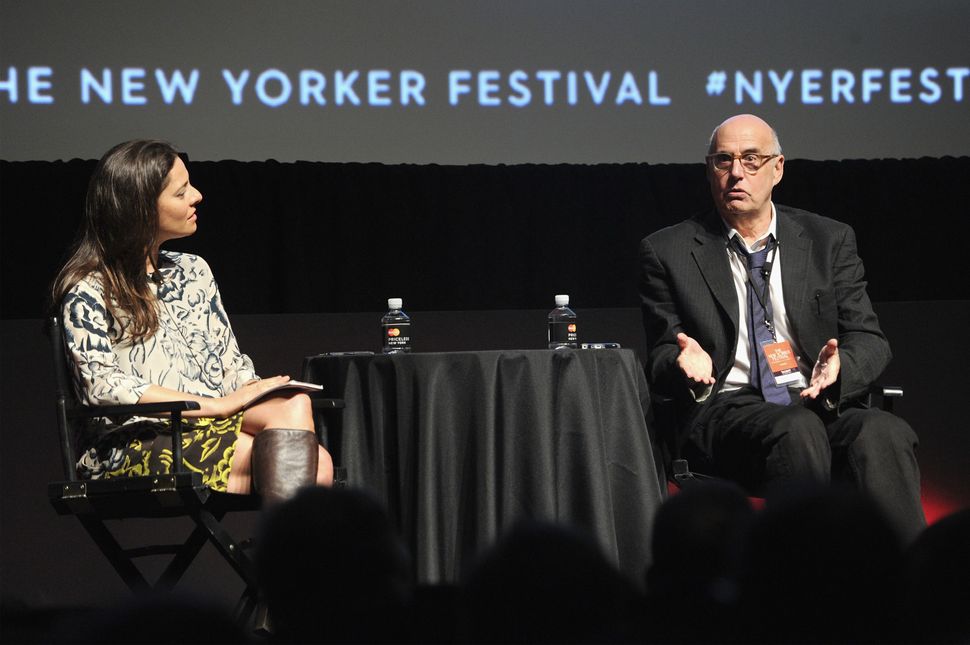 Ariel Levy and Jeffrey Tambor on stage at the New Yorker Festival. Image by Getty Images

Jeffrey Tambor used to be that actor you saw everywhere but couldn’t place.

In January, he won a Golden Globe in the Best Actor in a TV Series category, for his performance as Maura Pfefferman, a Jewish father of three who comes out as transgender, in Amazon’s “Transparent.” In September he took home the Emmy for Outstanding Lead Actor in a Comedy Series for the same role.

At the age of 71, Tambor is finally having his leading man moment: He recently got a free subway ride, a crowning moment for any New Yorker. He gets stopped on the street. Strangers want to talk to him, and share their stories.

In an interview with New Yorker staff writer Ariel Levy during the on October 3, Tambor said he doesn’t take this newfound recognition lightly.

“I say every chance I can that Jill Soloway, the creator of our show, changed my life with the great role of Maura Pfefferman, but also the great responsibility of Maura Pfefferman,” he said. “There’s not a day that [goes] by that I don’t feel the great responsibility of playing that role, not only for the eight Rotten Tomatoes or the nine thumbs up or whatever culture we’re in, but also because I want to do it right. Because, as I say, lives are at stake.“

Asked what he found most surprising about the role, Tambor answered that he found navigating the “female accoutrements” unexpectedly easy. “I haven’t been to the hair department in 35 years,” he joked. But to those who ask whether the experience got him in touch with his feminine side, Tambor offers a more nuanced approach.

“I got to, for the first time ever, use all of Jeffrey Tambor in a role,” he said. “It’s what I always thought acting would be like when I was a kid acting out talk shows in my parents’ basement.”

Those parents were Mike and Eileen Tambor, Conservative Jews with Russian-Hungarian roots who settled in San Francisco in the early 1940s. He was an ex-boxer turned flooring contractor, she was a housewife.

“They were so scared that I was going to become an actor. They were Jewish middle class. [My father] wanted me to take over his contracting company.”

Though his grandparents were Orthodox, Tambor’s Jewishness, he has said previously, came to him rather late.

And yet, he’s definitely Jewish. The entire interview was peppered with spontaneous Jewish quips.

On what it’s like being a Conservative Jew: It was too expensive to be an Orthodox Jew on the West Coast, he joked. “Let’s scale it back a little, that’s what it means to be Conservative.”

On other denominations: “Reform is basically you have to sing show tunes. Now there’s Reconstruction, deconstruction, left construction, there’s the first act of Annie. Who knows what it is.”

On the “Arrested Development” chicken dance: “I still can’t do that dance, by the way. I can do the kosher chicken dance.”

On the Pfefferman family: They are very Jewish. It’s not Zabar’s, it’s something else. [They’re] West Coast Jewy.”

On Ariel Levy’s dad telling her “No where to go but down,” after hearing she got a job at the New Yorker: “Are you Jewish? Well… it’s in the Torah [for a dad to react that way].”

(His own father gave him a similar piece of advice: “Don’t celebrate. They’ll take it away from you.”)

Recalling a moment where someone asked him if “Transparent” was about finding happiness, Tambor deadpanned: “I’m Russian Hungarian, I know nothing about happiness. That wasn’t on the menu at our house.”

He talked about his five kids: Molly, 40, from his first marriage, and Gabriel Kasper, 10, Eve Julia, 8, and twins Hugo Bernard and Eli Nicholas, 6, from his current marriage with Kasia Ostlun.

Levy then moved on to a more serious topic: his drinking. Tambor has been sober for over a dozen years; a move that, he says, “affected my entire life. It got me more in touch with me.”

It’s a way of thinking that has served him well on “Transparent,” and translates into the amount of heartfelt support he has gotten from the trans community and even total strangers, who stop him on the street to talk, he said.

“I’m telling you, my life is so amazing that way. There is something — oh, I’m getting emotional — about this role that is over and above me that is speaking to people. And it’s not my creation. It’s what I represent. Maura Pfefferman represents all the people who have been other-ized in their lives and people get into that.”

That’s a lot of responsibility for the man who voiced King Neptune on “Spongebob Squarepants.” But don’t worry; the fame isn’t going to his head. Looking around the room during the interview, he paused.

“This is so cool for a little Jewish boy,” he said. “There are things in New York. There’s the Russian Tea Room, there’s Broadway and there’s the New Yorker.”