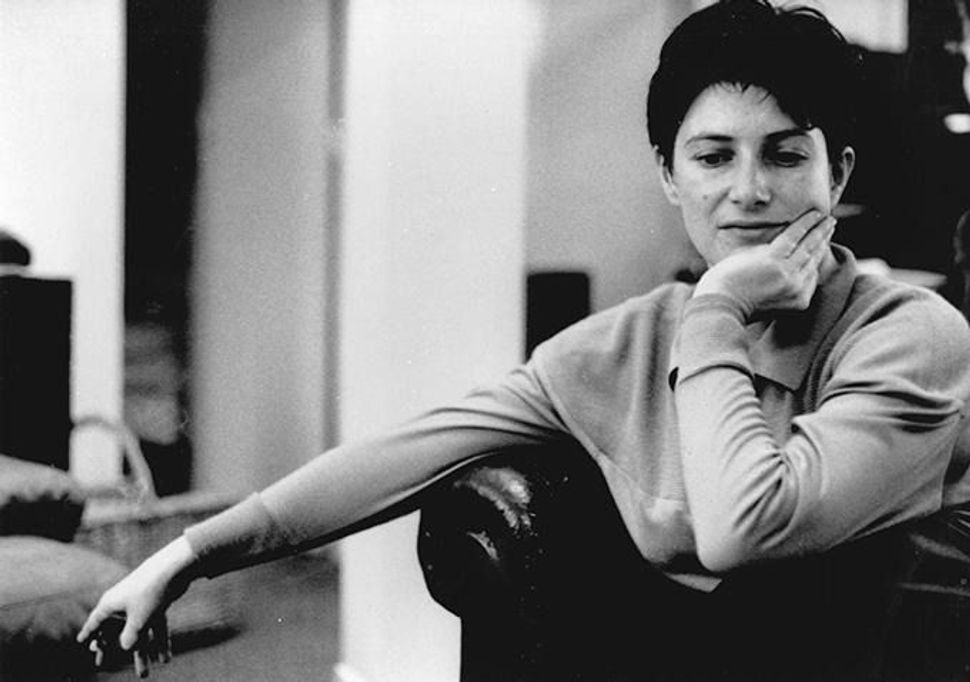 When I met Chantal Akerman, the famed film director whose alleged suicide was reported on October 6, I told her I was going to steal her shit. I didn’t blurt it out exactly like that, but having just seen her film “D’est” projected on a big beautiful screen at Cornell Cinema in 1995, I was suddenly filled with ideas about settings other than grim Soviet railway stations where I could apply one of Akerman’s signature techniques: glacially slow, rigidly formal, and gently creeping takes.

“I think it would be cool to film all the stops on the New Jersey Turnpike in figure 8 camera motions, put it together,” I told her.

I had engineered this encounter by dashing out of the theater to the parking lot moments after she’d told the audience that she’d very much like this to be the last question so she could please have a cigarette thank you very much.

It’s the kind of impulsive thing you do when you like a girl, and I had a big art crush on Chantal Akerman. I certainly wasn’t alone in this; everyone I knew did.

Chantal was the perfect blend of fan and pioneer. She’d fallen in love with film after watching Jean Luc Godard’s “Pierrot le Fou” at age 15, then went on to make a string of fantastic movies of her own, including her masterpiece, “Jeanne Dielman, 23 Quai de Commerce, 1080 Bruxelles.”

Her first short film, “Saute ma Ville (“Blow Up My Town”), which is shown constantly in film schools worldwide, is purposeful and playful, frenetic and formal, equal parts feminist and rock ‘n’ roll, with a blend of innocence and knowingness that speaks directly to the hearts of young filmmakers.

The news that Akerman took her own life this week at the age of 65 will hit such aspiring artists the hardest. No matter how long her career spanned (she released “Jeanne D” at age 25), she was always unsatisfied with her work and impatient in her demeanor. That is to say, she basically seemed exactly like one of us, the film students, only with all that extra talent.

There is no one who bridges the gap between art film and academia as neatly as Akerman. Generations of young filmmakers have embraced her as their own despite (or because of) her lack of marquee fame, which is all the more surprising considering her prodigious output and influence.

Her films did more than infuse a determined feminism into cinema: they helped make practical sense out of the didactic discussions around the quote-unquote male gaze, so prevalent in the film theory classes of our youth but always discussed, never demonstrated. Akerman’s long takes were more meaningful than Miklos Jansco’s and more digestible than Andy Warhol’s.

And she was just cool.

“So my thing, but set in New Jersey?” she repeated incredulously from behind a cloud of cigarette smoke before excusing herself, having correctly decided that being alone with her thoughts was preferable to hearing mine.

While I never made Turnpike, when I began working as President Obama’s videographer, I made good on my threat to steal Chantal Akerman’s shit.

In my new position I found myself as stand-in for the ordinary observer inside the executive branch of government, and I was determined to use that role as a documentarian as opposed to some state TV journalist. And the true difference between the two is shooting formal shots to create a continuous experience, rather than film continuous experiences.

In between casual, home-movie-like shots of President Obama are the Akerman shots: the slow pans around the Oval Office, the tracking down long corridors and through open doors, the frames within frames, the crowds both engaged with and ignorant of the camera. I would sometimes just set up my camera in a hallway and just film regardless of who was there or what was happening. It wasn’t a rest stop on the Jersey Turnpike, but the corridor outside of the UN General Assembly chamber, or the staging area for a treaty signing in Prague, could be Akerman-esque in the extreme.

By making these extraordinary situations ordinary, by letting them be observed at length and letting the democratic forces of geometry and geography dictate the shot, I felt like I was practicing the Akerman ideal — not to say that my on-the-fly use of a prosumer handheld camera compares to the stately style of a film like “D’est.”

Chantal Akerman had a thought about political filmmaking: “In my films, I follow an opposite trajectory to that of the makers of political films,” she once said. “They have a skeleton, an idea and then they put on flesh: I have in the first place the flesh, the skeleton appears later.”

And that’s an idea worth stealing if you’re a political filmmaker in an age when authenticity is king.

But with Chantal gone, there are fewer ideas left worth stealing. And to be clear she never really explicitly said I couldn’t steal hers. She just disappeared in a cloud of smoke.

Arun Chaudhary is a filmmaker and director of Committee, which bills itself as being dedicated to counter-messaging the far right worldwide. He is the author of “First Cameraman: Documenting the Obama Presidency in Real Time.”