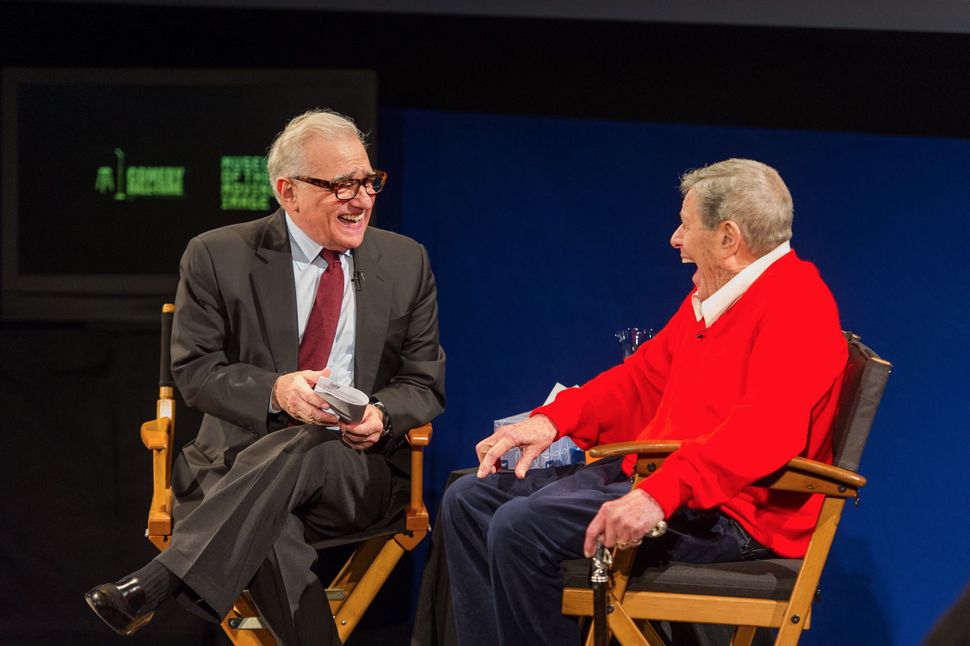 Image by Thanassi Karageorgiou / Museum of the Moving Image

“How are you, Marty?” Jerry Lewis asked, sizing up his former director Martin Scorsese. “You’re not as tall as I thought you were.”

His last words were clipped by a roomful of laughter, and the 89-year-old comedian, on hand for the Museum of the Moving Image and Comedy Hall of Fame discussion series “Iconic Characters of Comedy,” settled comfortably back in his chair.

It was a reunion for “The King of Comedy” director and star, but in some ways felt more like a warm exchange between fan and comedy hero. Scorsese, who played moderator for the evening, thumbed through the thick stack of notes on his lap (“You got my whole resumé there!” Lewis said.) and asked the comedian to discuss his early days in film. “The first three days at Paramount, they couldn’t find me.” Lewis recalled. “I was in the editing room, I was in the camera department, I was in miniatures. I went everywhere in that lot except legal.”

He was hard-pressed to pick one aspect of film that he favored over the other. “The set up, the acting, the movement, the cues.” he said, listing off just a few. There were times, however, that the multi-tasking took a toll. While directing and starring in the 1960 comedy, “The Bellboy,” Lewis found himself on set, trying to get through a scene and feeling overwhelmingly anxious. “I’d yell to the crew that I gotta have a talk with the star of the movie,” Lewis recalled. “I’d go to my dressing room and look in the mirror and say, ‘You want to make this? What’s your plan?’”

And then, there were the ever-compromising pratfalls. Like, that one time when he jumped out of a three-story window into cardboard boxes and landed on the corner of one of the boxes. “I gave up my self completely.” he said, shaking his head. “I’ve got more scars on my body—Christ, you’d think I played NFL football.”

Did he ever draw the line?

Yes, it turns out, mostly when it came to prolonged cross-dressing. Lewis recalled turning down director Billy Wilder’s offer for a role in “Some Like it Hot” because he felt it would be “uncomfortable” to dress in drag for the duration of a movie. From then on, every year, Lewis would receive a present from Wilder in the mail. “He always signed it the same way: ‘To the schmuck. Enjoy.’” Lewis paused briefly and smiled. “I would have had a chance to kiss Marilyn Monroe — you think about that for a minute.”

When the conversation veered towards directing, Lewis turned serious. “It must be rough for an actor to work with a comic.” he said, shaking his head. “Charlie Chaplin and I, we would talk about that for days.” It’s a delicate relationship, he explained, in which heavy expectations are weighed on the director. “The actor thinks you’re God…and that’s the way they should think because then they’re going to listen carefully to what [you] have to say.”

He wasn’t always so lucky. “I have worked with so many actors that didn’t listen.” he recalled. “I’d say to the actor, ‘I know you never thought you’d be in the presence of a Super Jew. But try to concentrate.’”

Always the perfectionist, Lewis recalled calling crews back to set to reshoot scenes — long after they had been printed. “I had hunch that I could do it differently.” he said. “It felt good because I saw that [after that] it was better.”

But as an actor, his patience wore a little thinner, and he playfully lamented how many takes Scorsese asked him to do for “The King of Comedy.” In turn, Scorsese gently reminded him that, in fact, Robert De Niro had to do even more takes than him.