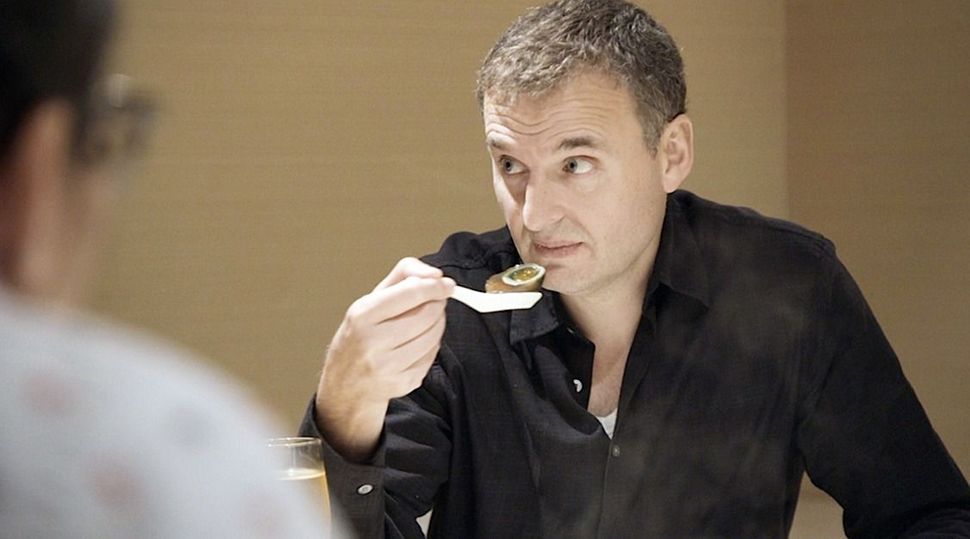 Name-dropping alert! Fifteen years ago I was introduced to Phil Rosenthal by the legendary comedy writer/producer Norman Lear. I was a huge fan of “Everybody Loves Raymond,” which Phil created and executive produced for nine years and for which he won two Emmys, and he said he was a huge fan of my first book, “An Empire of Their Own: How the Jews Invented Hollywood.” Phil and I have been friends ever since. A Rockland County kid who went to Hofstra, Phil is now the creator and star of a new show that airs Monday nights on the Public Broadcasting Service. It’s called “I’ll Have What Phil’s Having,” and it follows Phil on a food tour of great cities where he eats at celebrated restaurants, mucks around in the kitchen, delivers humorous asides, talks with great chefs and shmoozes with all sorts of folks.

His new show seemingly couldn’t seem more different from “Raymond.” But fundamentally it is actually very much like that show. Like “Raymond,” it is a program about love — not about a love of food, though it is certainly about that, too, but about a love of people.

Phil and I talked recently about his new show.

Neal: Before the credits in each episode, you have a voiceover that you grew up with “food without flavor” and that in your house, “meat was a punishment.” Mine, too. And I remember my grandmother would have us over on Sunday nights, and the specialty of the house — the only meal of the house — was boiled chicken. Every Sunday. I notice there is not a whole lot of Jewish cuisine on the show — basically Langer’s Deli, in L.A., and chopped liver at a restaurant in Hong Kong.

There seems to be some relationship between humor and food. You’re a comedy writer and a foodie. Have you ever thought about the interface between the two?

All bodily functions are funny. We laugh because it’s so relatable. We all do it. Look at that scene in Monty Python, “The Meaning of Life.” He’s eaten everything in the restaurant and keeps throwing it up and wants more. “Would you like one more thing? It’s wafer thin. One more mint.” And he explodes.

Maybe in some way, the meal is the setup and the evacuation or excretion is the punchline.

If you want to go that way in the Forward, that’s fine with me. When you think about it, eating is not a beautiful thing.

It certainly wasn’t in my house. My father ate like a trash compacter, and he could make the eating of any food sound as if he were crunching a pickle. But it’s funny how much food relates to our childhood memories. You have a line in one of the episodes where you say that life basically comes down to recovering our childhoods. Eating certainly seems to qualify.

You know the Pixar film “Ratatouille”? To me, one of the best moments in food history, if not in film history, is the climax, when the critic, who’s voiced by Peter O’Toole, is going to take this dish that the rat had to whip up very quickly, this ratatouille, and he puts it in his mouth, and then the movie smash-flashes back to that critic as a child, coming into his house, having hurt himself. His mother is soothing him with ratatouille, with this dish. He’s transported back to childhood, and I swear I get emotional just thinking about it. It remains the crystallization of how I feel about food — that it can be transportive. It can take you back in your own life, but also to another world that you didn’t expect to see. That’s why, to me, it’s an art form as valid as music or the visual arts of any kind.

I think one of the things you see in the series is that food is emotion. There are a number of deeply emotional moments.

And not just from taste, but from the context of the meal — the sense of sharing the pleasure of the meal.

Exactly right. It’s never just content, it’s context. One of my favorite moments in the show is where I make an egg cream for a family that runs a pond eel restaurant in Tokyo, and you see how excited they are — or pretend to be.

And there’s a similar moment at the gelato store in Florence.

Phil: I got emotional then, not just because of the taste of the gelato but because the woman who made it was so sweet. I just met her 15 minutes before, and we’re best friends now because I appreciate what she does and she appreciates my appreciation. It bonds us together forever.

We’ve known each other for a long time, but I have no idea how you got interested in food.

It’s all about not having had it be a priority in my house growing up. I can’t say that this was the moment, but it’s a moment I remember. I’m in New York and I’m a starving actor. I have 20 cents in the bank, and I’m eating tuna fish for dinner, a hot dog, a slice of pizza. Yet, I’m reading in The New York Times about these magical places called “four-star restaurants.” And I’m going: “This is a fantasy land. This is unbelievable.” I said to my roommate Rob Weiner, “Want to save up and do this with me?” Two idiots saving up $100. I never would have done it if I didn’t have a co-idiot, right? So we would do this twice a year, go to these four-star restaurants — on my birthday and on his birthday. It’s never left me — the sharing of that, the feeling of wanting to share it, the great experience, the extraordinary experience.

We keep getting back to sharing. One of my favorite scenes is outside Florence, where you and the butcher, and eventually your entire crew, are passing around this massive hunk of steak and eating it right off the bone.

It’s only good if you can share it. And sharing culture, that’s what I want the show to be. The food and the humor are the sugar that I want the medicine to go down easily with. The medicine is, go experience someone else’s experience. Maybe literally by taking in the culture, by eating it, you’ll be interested in how people live who aren’t exactly like you. When I talked to the Food Network or the Travel Channel about this show, they told me that people aren’t interested in travel. The Travel Channel told me that. The Food Network said, “The only food they’re interested in is barbecue.”

The democrat in me says that a lot of the restaurants you visit must be prohibitively expensive for anyone who isn’t fairly wealthy. You go to one place, Narisawa in Tokyo, where they actually put a speaker under the dish carrying a live feed from a forest because the dish is made to resemble a forest floor. That meal must have cost a fortune.

I come from a place where money is to be saved in case we need an operation.

Every Jew comes from that place.

But let’s say you save for the operation now. Let’s put a little aside to have an experience in our lives that’s different than the everyday. The world is worth seeing, knowing and, for me, eating.

I’m curious. How much does a meal at Narisawa in Tokyo or L’Arpege in Paris cost?

Honestly, I didn’t ask because I’m not paying for it. And I make a point of saying this is a splurge. But there are incredible chefs who work with very little: cheap ingredients elevated through talent, time and resourcefulness.

Okay. One of the places that had my mouth watering was that food wagon in L.A. with those carnitas tacos.

Maybe the single greatest bite of food in the series so far. That could be the quintessential moment for the show — a food truck tour in a town that I’ve lived in for 25 years. Have I been happier on camera than eating this $2 taco? That chef was a genius.

Here is a mystery — you keep gorging yourself and yet you are rail thin.

When you see me on camera that’s probably the only time I’m eating that day. I’m all about “pick your spots.” Save your big splurges, calorically, for special occasions. But I got to be honest — there’s more than picking your spots. In America we’re not eating real food. That’s one reason we’re fat. There’s a scene in Paris where I’m taking Pizza Hut fliers off cars. We don’t need to ruin other people’s cultures.

You have probably heard the aphorism, “No food tastes as good as thin feels.” This is how you know I’m not a foodie. I subscribe to that. I lost a lot of weight, but it’s because I live on Lean Cuisines.

My preferred option would be living in Paris, but that’s not going to happen. By the way, it’s curious that you are a gourmet who doesn’t cook.

It’s a young man’s game — being a chef in a hot kitchen and being on your feet all day. I meet a lot of chefs; they don’t need me to cook. They can’t write a sitcom. And the truth is, I really don’t want to know too much — just enough to enhance my pleasure.

There is one scene where you are served a brown spoiled egg, which is supposed to be some sort of delicacy, and from your expression we can see that it is nearly inedible. If context is more important than content, I wonder if you can have a great meal even if the food isn’t very good.

Look, I do a lot of research before I go. Do I get it right all the time? No. But having a meal that isn’t great is like having those grace notes in a sitcom where suddenly it’s serious for a minute. It makes it real, relatable, and by contrast and comparison, the next moment that is funny is funnier because you had the serious moment.

So the message is, go to McDonald’s before you go to L’Armitage in Paris or Yardbird in Hong Kong.

I’m going to do a second season whether they film me or not. I have to tell you, I never got reviews as unanimously positive as this — even on “Raymond.” I can’t find anything negative. And believe me, being Jewish, I look.

Just promise me that next season you’ll find the world’s best boiled chicken.