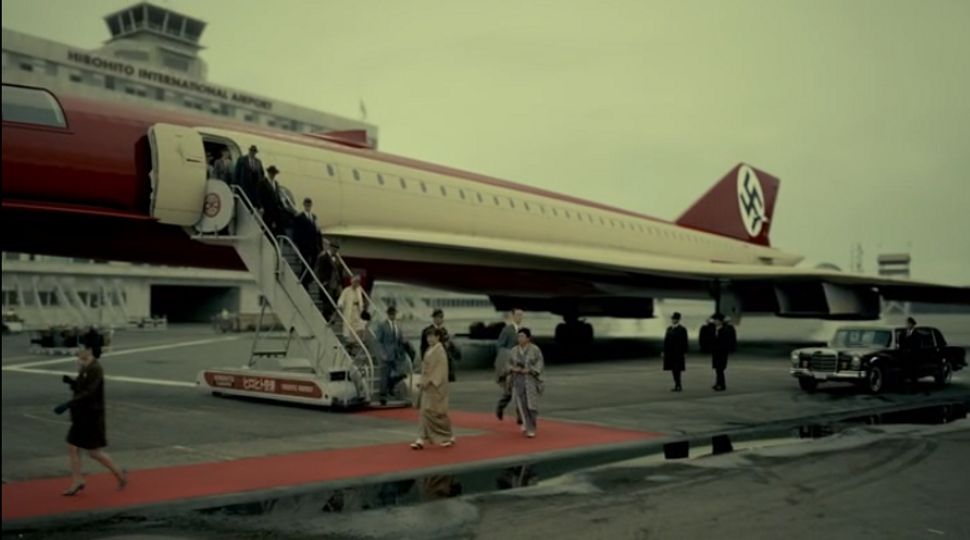 Counterfactual speculation about the Third Reich is at an all-time high. In recent weeks, Republican presidential candidate Ben Carson has claimed that German Jews could have resisted the Nazis more effectively if they had enjoyed access to guns. Israeli Prime Minister Benjamin Netanyahu has suggested that Adolf Hitler never would have ordered the murder of the Jews if the Grand Mufti of Jerusalem hadn’t met with him in November 1941. And German moviegoers have flocked to see the country’s top-ranked film, “Look Who’s Back,” featuring a time-traveling Hitler who becomes a celebrity talk show host.

Now, Amazon Prime is poised to capitalize on the trend by releasing the full season of its big budget, ready-for-binge-watching miniseries, “The Man in the High Castle,” produced by Ridley Scott and based on the legendary science fiction writer Philip K. Dick’s famous alternate history novel from 1962.

The show debuts on November 20, and the question is how “The Man in the High Castle” will be viewed in a climate where everyone seems to be playing fast and loose with historical facts.

“The Man in the High Castle” profiles a nightmare vision of how American history might have turned out if the country had failed to intervene in World War II. As a result of the country’s isolationism, it succumbs quickly to a joint Nazi-Japanese invasion and is divided into twin occupation zones. Set 20 years later in California and New York, the series paints a grim portrait of the United States. Jews in the Nazi-occupied East have been exterminated entirely, and in the Japanese-run West they live in terror of being deported. The country at large, meanwhile, is mired in economic decline and moral corruption. Although some Americans struggle to resist the occupiers, many Americans collaborate and become supporters of the dystopian, Axis-ruled world.

Viewers today will probably interpret this bleak scenario differently from how readers of Dick’s original novel did. When Dick wrote “The Man in the High Castle” in the late 1950s and early ‘60s, he was inspired by the renewed attention given to Germany’s Nazi past, typified by the resurgence of neo-Nazi vandalism, the capture of SS officer Adolf Eichmann in Argentina and the intensifying East-West showdown over Berlin. As a longtime anti-fascist, he believed that this attention was overdue, especially as Cold War anxieties had overshadowed the Nazi legacy in the 1950s.

Yet Dick was also a Berkeley, California-based liberal who was concerned about the rightward drift of American life, epitomized by its conservative anti-communism and its refusal to grant civil rights to African Americans. By showing occupied America making common cause with Nazis in alternate history, “The Man in the High Castle” warned of the country’s potential of going fascist in real history.

Today, of course, the series will likely be seen as a commentary on post-9/11 American life. Ironically, “The Man in the High Castle” benefits from the years of false starts that hampered the novel from being turned into a film. Had it actually been produced in the comparatively peaceful 1990s, it would have had less resonance. But in a world where the United States remains embroiled in a “war on terror” sponsored by what was once called an “Axis of Evil,” Dick’s vision has heightened relevance.

Conservatives will find obvious parallels between an America attacked by the Nazis and an America that was attacked on 9/11. They most probably view “The Man in the High Castle” as offering a cautionary lesson about the need for ongoing vigilance to stave off the threats posed by the Islamic radicalism of Al Qaeda and the Islamic State group.

But they may also perceive the internal threats of creeping domestic fascism. Since the election of President Obama in 2008, many conservatives have alleged that his administration has taken the country down the path of fascist rule. Tea party activists, for instance, notoriously decried Obamacare as heralding “death panels” reminiscent of the Nazi regime’s T4 Euthanasia Program. Conservatives will probably find their fears confirmed in a bleak scene in the pilot of the series, when an American fascist collaborator, Joe Blake, is told by a state trooper that gray flakes floating through the air are the ashes from the corpses of “cripples” that are being burned “as a drag on the state.” They will probably also nod in recognition at the fact, explained in the second episode, that Nazis who rule America have prohibited reading the Bible.

Liberals, meanwhile, will see their own suspicions confirmed. During the eight years of the second Bush administration, many on the political left feared that the country was moving in a fascist direction. They compared the passing of the Patriot Act, the use of torture and the continued existence of Guantanamo Bay’s prison after 9/11 to the Nazis’ brutal violations of civil rights and the creation of concentration camps following the Reichstag fire.

Liberal fears may also find validation in multiple scenes in “The Man in the High Castle”: for instance, when the Gestapo tortures a member of the anti-German resistance to death at New York City’s Rikers Island prison — a site that has recently come under fire for prisoner abuses. They will also hear echoes of the religious right when an American Obergruppenführer tells his son at the breakfast table that “moral decay” and “decadence ruined this country before the war.”

The series’ most potentially subversive message, however, involves the relationship between the American anti-Nazi resistance and the German occupiers. In several scenes, American fighters wielding machine guns ambush Nazi officials. The Nazis label them “terrorists,” but viewers will surely see them as freedom fighters. In the process, viewers will be forced to reflect on the American experience in Iraq. There, the roles have long been reversed: The resisters are our enemies, and the collaborators our friends. By prompting viewers to consider the relativity of such relationships, “The Man in the High Castle” provides a useful deconstruction of facile historical analogies.

This is to be welcomed, given the way in which recent Nazi analogies have distorted the historical record. “The Man in the High Castle” raises many thought-provoking questions about the past as well as the present, but we should resist thinking that it provides any easy answers. We should hesitate before drawing too many direct parallels between an America that might have been and the America that currently exists.

Gavriel D. Rosenfeld is a professor of history at Fairfield University and is the author of the new book “Hi Hitler! How the Nazi Past Is Being Normalized in Contemporary Culture” (Cambridge University Press).