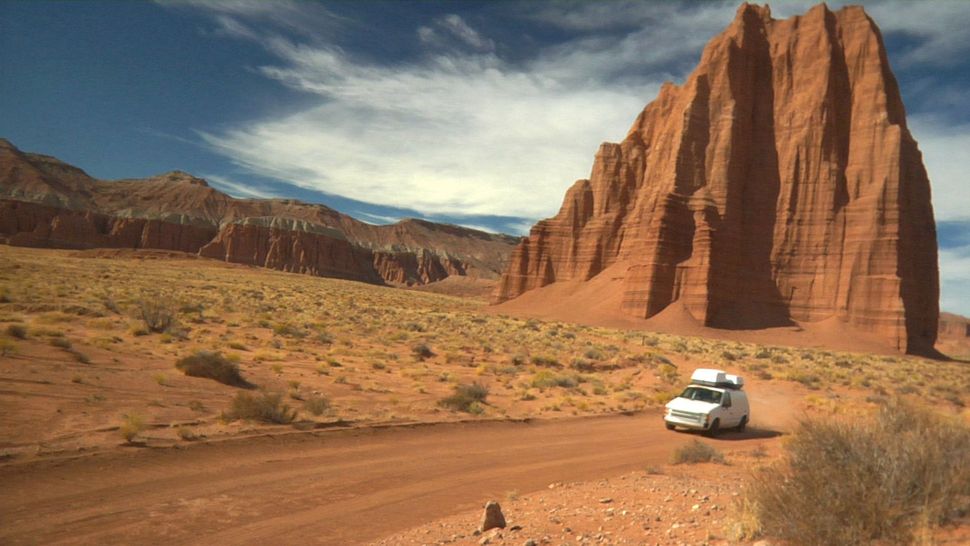 “We’re taking the opportunity to look back at some of the highlights of films that premiered over the 25 years,” said Aviva Weintraub, the festival’s director. That retrospective takes the form of nine films that were originally presented in the festival’s prior years and will get a second showing this year.

Those films include the beloved, late Belgian filmmaker Chantal Akerman’s “Tomorrow We Move,” and Vladimir Vilner’s Soviet Jewish gangster flick, “Benya Krik.” They’ll screen throughout the festival, interspersed with films from 2014 and 2015.

“People will see a deep and wide and broad take on global Jewish culture,” Weintraub said. “It’s not only about seeing the movies, it’s about having the opportunity to discuss with the filmmakers, who are artists talking about their own work.”

The documentaries in this year’s festival are remarkably consistent; nearly all of them tell the stories of artists working to change the face of art.

The documentary most singularly well suited to this particular festival is “Art and Heart: The World of Isaiah Sheffer,” a paean to an essentially New York Jewish artist. Sheffer, born into a family of actors in New York’s storied Yiddish theater, co-founded the performance venue Symphony Space. located on the city’s Upper West Side. He possessed a rare ability to energize the city for events that in other hands could have fallen flat. Take, for instance, Bloomsday, the annual celebration of James Joyce’s “Ulysses.” At Symphony Space, readings from Joyce’s notoriously dense novel became such a hot ticket that celebrities like Stephen Colbert clamored to take part. “Art and Heart,” directed by Catherine Tambini and executive produced by Sheffer’s widow, Ethel Sheffer, is a loving tribute to Sheffer’s life and legacy.

“Carvalho’s Journey” tells the story of Philadelphia artist Solomon Nunes Carvalho, one of the first photographers of the Western United States. Accompanying explorer John Fremont on his westward search for the best route for a transcontinental railway in the 1850s, Carvalho used daguerreotypes to chronicle the expedition’s findings. Stories about Jews on the frontier are rare, and “Carvalho’s Journey,” filmed largely among the astonishing geographic formations of the Southwest, is both a surprising and a visually stunning work.

In “Hot Sugar’s Cold World,” directed by Adam Bhala Lough, music producer Nick Koenig, professionally known as Hot Sugar, takes a meticulously natural approach to such genres of music as rap and electronica, normally characterized by synthetic production. He wanders city streets, beaches and parties with a tape recorder, using the sounds he finds to make the beats and melodies in his songs. Lough follows Koenig through a breakup with his girlfriend, the rapper Kitty, and though the soul-searching that follows. He mimics Koenig’s musical style, using found sounds from the music producer’s life — for instance, musings on Twitter and Tumblr — to help tell the producer’s story.

Some of the festival’s most interesting fictional offerings are its most unassuming; its most extravagant — the nearly-three-hours-long “Rabin: The Last Day” — falls flat. Amos Gitai’s docudrama, which blends re-enactments of the events leading up to and following the 1995 assassination of then Israeli prime minister Yitzhak Rabin with found footage of news coverage of the same event, will receive its U.S. premiere at the festival. Gitai is one of Israel’s most celebrated filmmakers. His previous work includes “Golem, the Spirit of Exile” and “Promised Land.” But “Rabin: The Last Day” suffers from clunky pacing and overdramatic storytelling and would have benefited from a much tighter edit.

By contrast, “How To Win Enemies,” an Argentinean offering from director Gabriel Lichtmann, follows a quiet lawyer obsessed with reading mysteries as he tries to track down cash stolen from him by a one-night stand and to prepare for his no-goodnik elder brother’s wedding. Led by a strong performance from Martin Slipak, the film manages to turn the plot points of a thriller into the perfect foil for the drama of a Jewish wedding.

Also thrilling is David Bezmozgis’s “Natasha,” adapted from his short story of the same name. An extended family of Russian immigrants in Canada is thrown into turmoil when an uncle, long a bachelor, brings over a new wife and her 14-year-old daughter — the titular Natasha — from Moscow. Natasha seems, on first appearance, to be young and shy; she quickly reveals herself to be something wholly different, with a profound effect on her new cousin, the largely silent, slightly older Mark. “Natasha” is a quietly, profoundly disturbing twist on the trope of trouble in suburban paradise.

“The Law” is a riveting retelling of France’s fight to legalize abortion in the fall of 1974. The film revolves around the three days of parliamentary debate that decided the issue, following health minister — and Auschwitz survivor — Simone Veil, who leads the fight, and a young journalist, Diane, who covers the proceedings. The film moves quickly, but takes the time to peel back the layers of social tension in play, especially a lingering discomfort over Veil’s Judaism. In one long, brutal scene, Veil watches impassively as a French Member of Parliament compares legalizing abortion to legalizing the operations of Nazi doctors; he declares that Veil’s aim is to send fetuses to mass crematoriums, reminiscent of the concentration camp in which she was a prisoner.

Two other features stand out for their direct, loving explorations of single parents caring for troubled children. In “Wedding Doll,” directed by Nitzan Gilady, a mildly developmentally disabled woman in her 20s, Hagit, lives with her single mother, Sarah. The women both long for independence, but, bound to each other by Hagit’s needs, they find it difficult to achieve. “Ben Zaken,” directed by Efrat Corem, follows a single father’s attempts to drag himself and his rebellious 11-year-old daughter out of poverty. The film tells their story and at the same time touches on the resilience and misery of the other residents in their housing project. Corem’s peculiar cinematographic style — he tends to train the camera on scenery and let his characters wander through it rather than following them — makes the film feel like a series of stolen moments.

Short films will precede many of the festival’s documentary and narrative feature screenings, but it’s still worthwhile to check out the dedicated shorts program. The five films in it represent a remarkably creative array. A particular treat is Michael Slavens’s “What Cheer?,” which takes an inventive approach to understanding grief. A hint: The film is embodied by an unusually relentless, musical ensemble.

The closing night feature, Natalie Portman’s adaptation of Amos Oz’s “A Tale of Love and Darkness,” was not available for screening at press time. But one of the festival’s most exciting events will be the screening of “The Rifleman’s Violin,” a short documentary about violinist Stuart Canin, who at 19 performed for Harry Truman, Josef Stalin and Winston Churchill at the Potsdam Conference with pianist Eugene List. Following the screening, Canin will attempt to re-create that performance.